I've taken advantage of a big piece of practice for my calligraphy class (the one I go to, that is - I don't teach it, far from it!) to do a review of the various calligraphy pens in my collection - Lamy Joy, Rotring Artpen, Sheaffer Nononsense, Reform calligraphy pen and Calligraph (yes, those are two different pens: as Facebook says, "it's complicated"), Pelikan Graphos, Pilot Parallel and Online 'nuwood' calligraphy pen (a bit of a Waterman Serenité knockoff. Or hommage. Or something).

Winner, for me, was the Lamy Joy. I love its looks, particularly the contrast of black and red, the shininess of its plastic, and the little touches like the red accent on the 'tail' end, and the ink window (the same as in the Safari). I also find the triangular grip really comfortable to use, and it prevents the pen rotating slightly in my fingers and spoiling the 45 degree angle of the nib - something that sometimes happens with my dip pens. 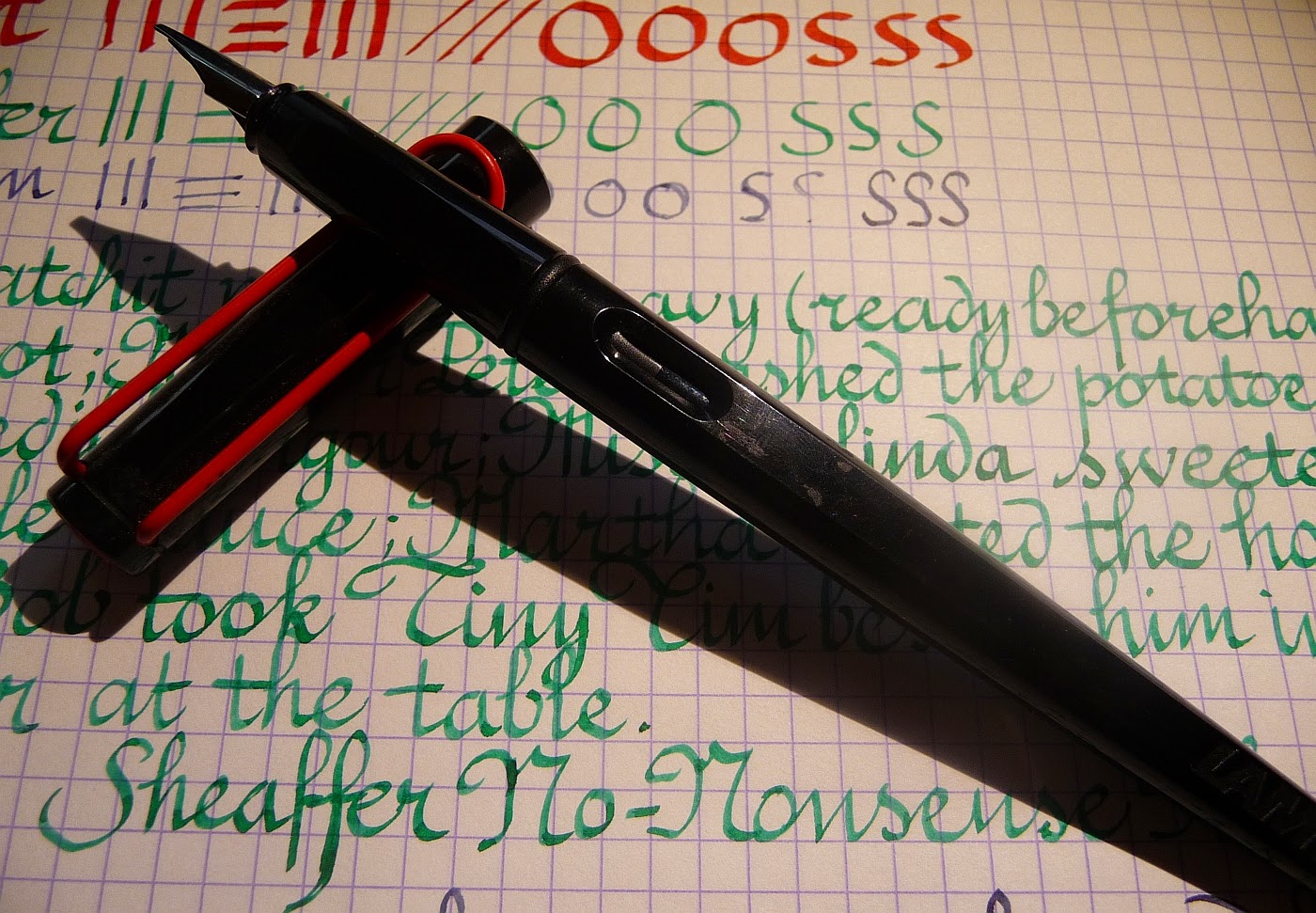 Joint second is the Rotring Artpen - a very wet writer, and as easy to use as the Lamy, but aesthetically, not quite as pleasing. It just doesn't have quite that Bauhaus style. But it's a really lovely writer and very comfortable to use. However, I hate the ridges on the section, not because they're uncomfortable - they're not - but because somehow, they always manage to retain a bit of ink however much I wipe, so I can never use this pen without getting my hands dirty. 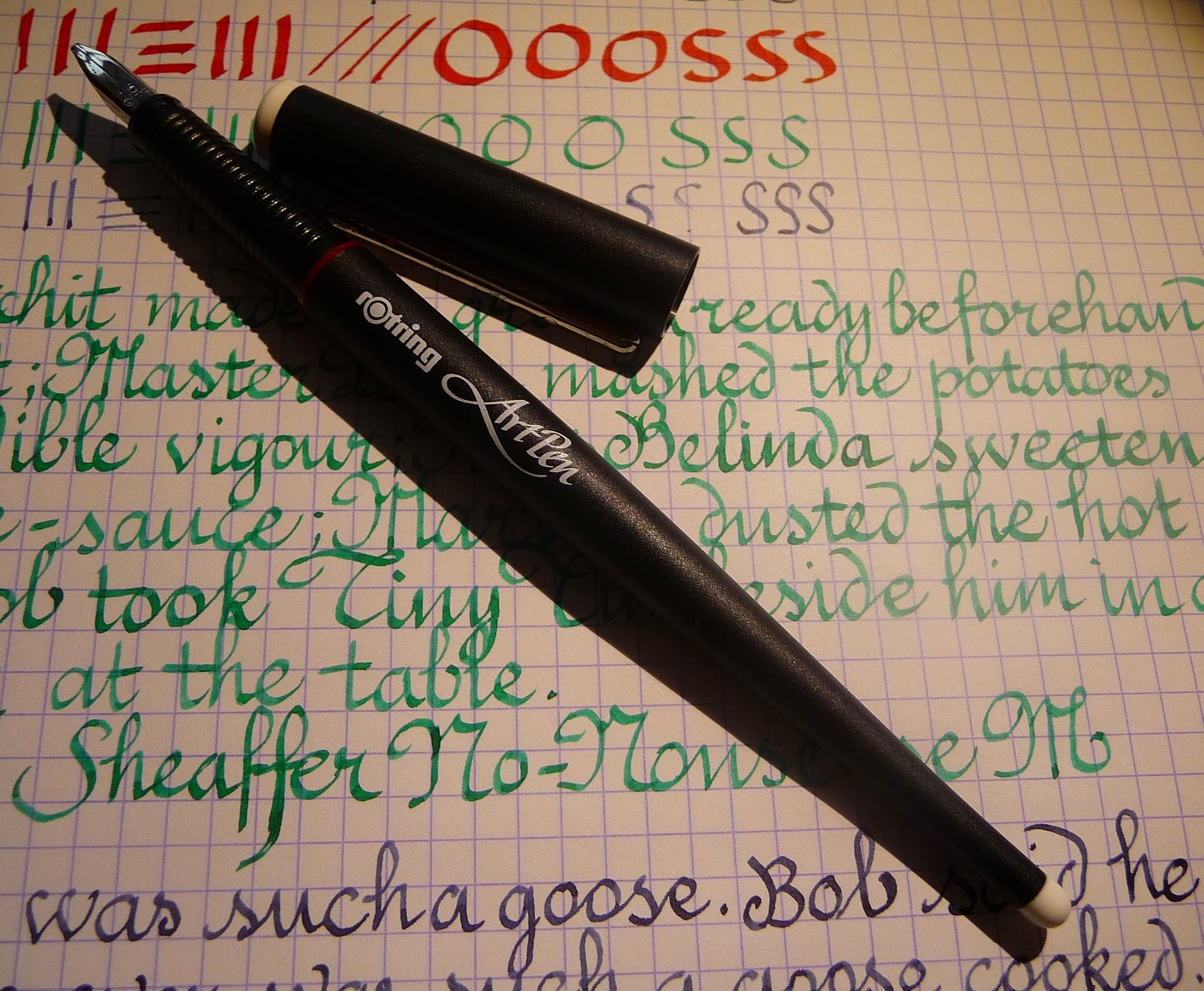 And the other joint second is the Reform Calligraph - looks like a Pelikan, and is a smart little black and gold piston filler which contains a really good load of ink. I particularly like it as unlike the Lamy and Rotring, it will fit in a regular pen case. Nice and crisp writer. I would love to find out more about this pen - for instance, when was it produced? I got mine at a car boot sale, in a rather fetching box with a second Calligraph (this one's 1.1m, can't remember offhand what the other one was); they do pop up occasionally on ebay. 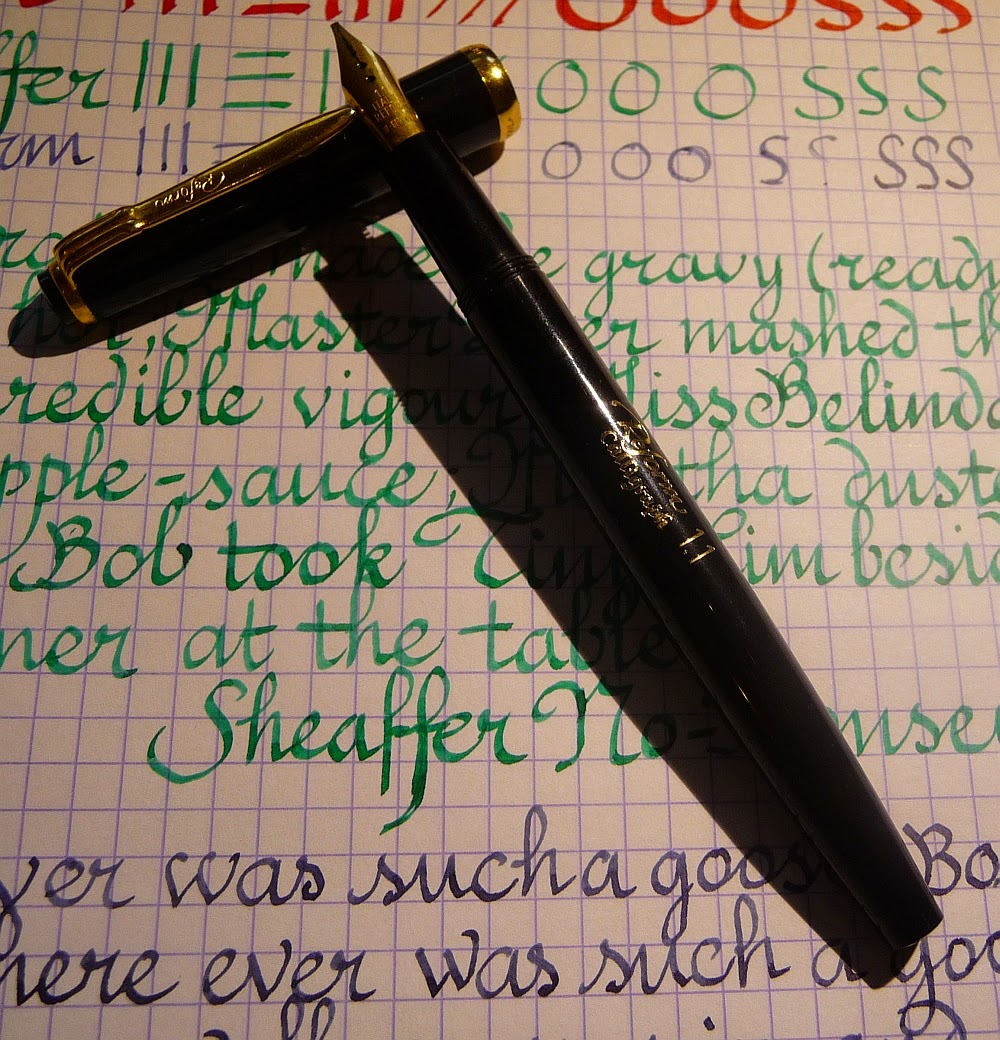 The Pilot Parallel is a lovely pen, but at 2.4mm just a bit too big to use in regular calligraphy, though it's my go-to pen for swash capitals. It's a very modern style and to my mind the design does properly what the Reform calligraphy pen (below) did badly - a very simple, vividly coloured cap, long tapered body, injection moulded components. The collector, I suspect, is the single thing that affects its quality the most - the flow of ink is wonderfully even across the width of the nib. 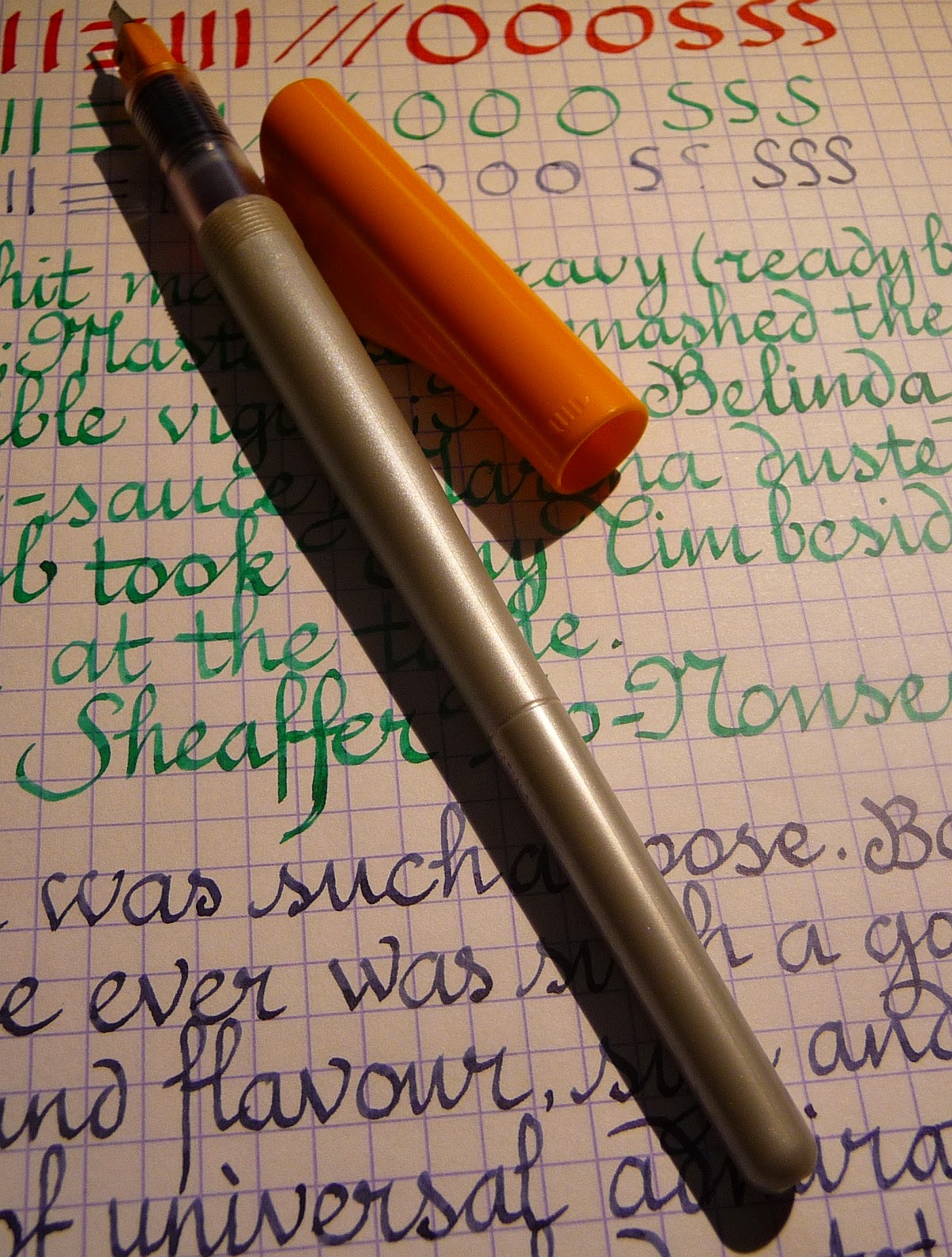 The Online 'nuwood' calligraphy pen is one that I bought with three interchangeable nib sections. It's a stunning looking pen in stripy wood, with a triangular cross-section to barrel and cap, and the curved looks of a Japanese katana or, more to the point, the Waterman Serenité. However... it doesn't quite live up to its looks. The section keeps unscrewing itself when I cap or uncap the pen. The section is really short, and thin, and there's a pronounced sharp shoulder between barrel and section, which make it quite uncomfortable to use.  However, the nibs are good - reasonably wet writing with nice crisp edges and good line variation. 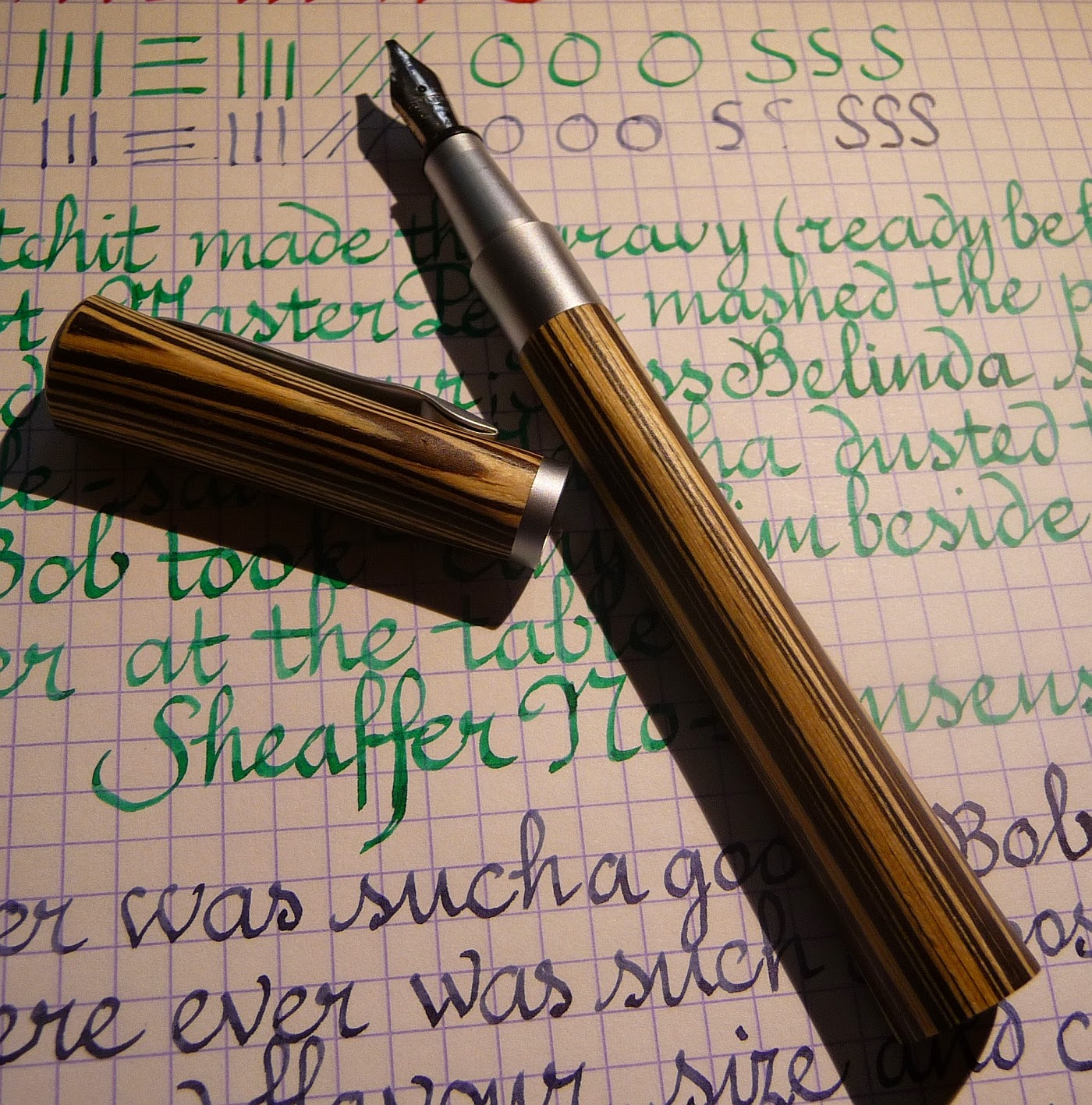 The Pelikan Graphos is horrible. Maybe I would get good results out of it if I devoted about a week to learning how to use it properly. Then again, maybe I wouldn't. It's not really a calligraphy pen anyway, it's a technical pen that was also used for lettering. A pity, because it is aesthetically very appealing in its functional and simple way.

The Reform Calligraphy pen is also just nasty. It is very cheap in construction, and the nib is both dry and scratchy. Move along, nothing to see here.

It really did amaze me how great the difference was between the two Reform pens. Even looking at the nibs, it's apparent - the Calligraph has a rather lovely nib with good tipping and two breather holes, the Calligraphy pen has a bit of brass sheet with a slit in it.

Finally the Sheaffer NoNonsense, transparent red with a rubber section and 'M' nib. I find it a bit annoying that they don't tell you how wide the nib is; everyone else does! I found this rather a dry writer, though perfectly adequate and quite comfortable to use. It's a nice robust pen for an EDC.

I do want to try to get hold of a couple of other calligraphy pens to try out;

Apologies for the very poor calligraphy. I'm practising the French style of ecriture ronde, and apart from a couple of alphabets, can't find any extensive examples to follow. You'd think there'd be a few pages of decent writing on the internet somewhere, wouldn't you? Of course my textbooks, all being English or American, are no help here!

The full version of the review, with more pictures, is at my blog, Fountain Pen Love.

The nib/feed of the Sheaffer was made in several places; Germany, US, and I think China.

Yours looks to be somewhat old, so the nib may have been damaged or needs adjustment, or the feed clogged, thus making the pen write dry.

I think the nibs sizes are:  F ~1.1mm, M ~1.5mm, B ~1.9mm   They may have changed a bit as the manufacturing was moved from country to country; US being in inches, and Germany in mm, don't know where the current nibs are made.

The problem with some of these pens (Sheaffer and Lamy) are the max width of the nib is 1.9mm.  So if you want to write larger, you need to use a different pen.

My Lamy joy was a bit on the dry side, and the ink colors were light/faded.  I had to adjust the nib to give me more flow, then I got the darker colors that I wanted.

Give yourself a treat - try an Osmiroid!

Handwriting - one of life's pure pleasures

Another pen produced for calligraphy is the Manuscript series. Many FPN members use them to great effect.

From a person's actions, we may infer attitudes, beliefs, --- and values. We do not know these characteristics outright. The human dichotomies of trust and distrust, honor and duplicity, love and hate --- all depend on internal states we cannot directly experience. Isn't this what adds zest to our life?

Give yourself a treat - try an Osmiroid!

Or better yet, an Esterbrook J with an Osmiroid nib...

Come to think of it, I have six or seven Esties waiting for repairs, so an Osmiroid nib might find its way into one of them. Thanks for the suggestion!

The Sheaffer isn't a NoNonsense, but an early Viewpoint. The NNs were a little damper, generally, especially compared to the China production of Viewpoints (yours looks like it's German, though).

I would also encourage trying a Manuscript; family owned, getting the points from a long-established English dip-pen maker, and they've got a magnificently shabby photo of the production floor on their site.  The fact that the pens write pretty well is almost secondary

Ernst, thanks for the correction. The Viewpoints seem like not quite as good quality all round as the earlier pens. Mind you, I acquired eleven of them for a nominal sum, plus a few spare nibs and bits and pieces, so I can hardly complain.

And yes, it's a German Viewpoint in the picture.

BTW, anyone know what the difference is between the German and US nibs on the Sheaffer?

Also tagged with one or more of these keywords: lamy, sheaffer, rotring, reform, pilot, calligraphy