I'm disturbingly excited about the idea of a purple Safari. I love other pens more than my Safaris but I can't help but look forward to adding it to the collection. I do genuinely wonder about the tone of purple.

And the specific tone of the Hero 359 is simply beautiful: 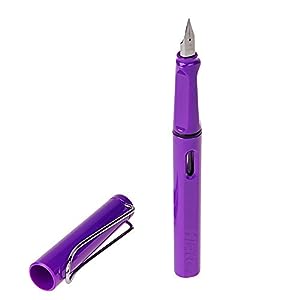 You should achieve something worthwhile indeed, Lamy!  above all, if you take into account that any of your Safari nibs (or for that matter any Lamy nib, from the steel 1.9 to the 14K OB, except the Lamy 2000 nibs) fits perfectly in this Hero...

I had considered getting a pink one, but every time I looked at them they looked kinda, well, cheap and cheesy, to the point that I was contemplating getting a purple Al-Star instead (or at least looking at them).  But if the new Safari color is going to be purple, I'll wait and take a peek when they come out, and see which I like better.

I didn't think I wanted a Safari at all because I didn't like the grip.  But then someone gave me a metal-bodies Jinhao 599 and the grip was... not too bad....  So, apparently it's going to be a "wait and see" situation, which is good for my wallet regardless of which I end up with (if either).

My son's girlfriend has a purple Al-Star. It is a really nice, deep, almost, but not quite, glowing reddish purple. She almost didn't get it back. The anodising is surprisingly deep.

It has a black clip/nib!

Looks promising! I don't think I'll be able to resist from buying it...

If it ends up being some sort of bright, Mattel, Barbie purple, then I'll give it a pass.

Ahhh! It's so pretty! Purple is my favorite color, and this shade is just plain gorgeous! Can't wait to get one!

I love it. I just saw the promotion for the "Charged Green" (for the AL) and thought "not again!"

am I really seeing purple?

And the specific tone of the Hero 359 is simply beautiful:

Thanks!  Too good not to pick up! I found a site in English as the same deal in Spanish where I couldn't get my Paypal to go through.

AND ... 60th reunion at Williams College coming up in June '16. The Williams color is purple!

"Early in the summer of 1865 the Williams baseball team was about to leave Williamstown to play the final game of the series against Harvard, and just before our departure two young ladies -- my sister and my cousin* -- who were very much interested in the result of the game, learned that while Harvard had adopted magenta as its College color, Williams was without any. They hurriedly purchased some royal purple ribbon and made small rosettes out of it, and pinning one on each member of the team,” said Eugene M. Jerome (Class of 1867). “Let this royal purple be the Williams color, and may it bring you the victory over Harvard."

"The royal purple joyfully floated from the mast-head that next day, for the game was handsomely won. This victory gave Williams the championship in the intercollegiate contests between Princeton, Harvard and Williams, and the royal purple has ever since been the banner under which Williams has won so many brilliant victories."

... From the Williams College web site

However, one of my grandsons has just been accepted by Harvard for early admission to the Class of 2020. 10,000 Men of Harvard ...

This just went to the top of my wish list! Thanks for the photos!

Oh, nice.  The Pelican 205 Amethyst is already on my wish list; it couldn't hurt to put this on, too.

Thanks!  Too good not to pick up! I found a site in English as the same deal in Spanish where I couldn't get my Paypal to go through.

But I'm still looking forward to this Safari. So pretty!

What year are we living?

That is correct, Lamy did not launch the official product pictures yet.

What year are we living?

Preorder? Modern capitalism is a bit more complex than you think!

Preorder? Modern capitalism is a bit more complex than you think!

As far as I remember last year they were announced somewhere January and delivered March...