This is what happens when someone gives me something... 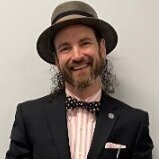 By PENny Dreadful,
May 11 in Introductions