I am interested in why people don’t change their handwriting to accompany their nib size. 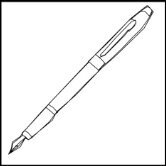