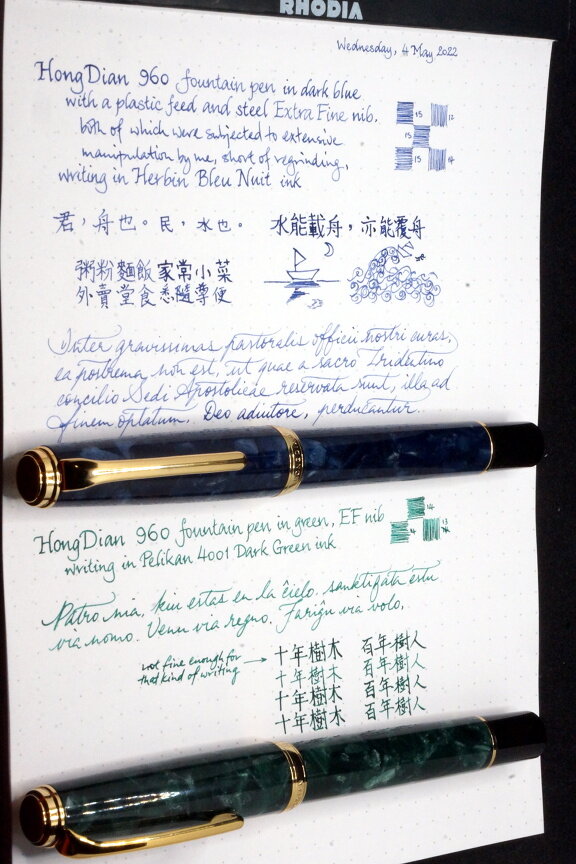 I have not been so positively impressed by the HongDian number 32 (i.e. 32mm in total length, and curves around a roughly 6mm-diameter feed) steel EF nib, as I had been the brand's smaller number 26 EF nibs.

The dark blue pen in the pair shown here arrived in particularly poor condition; when I unscrewed the nib unit, I could see the metal inner wall of the gripping section has some deep scratches. As for the nibs themselves, after a couple of uses one of them has already lost much of the gold plating from the ‘open’ part of the nib face, and barely bicolour in appearance any more. I can't tell whether that was the nib that was originally fitted on the dark blue pen, since I most likely swapped them around and again, inadvertently when I cleaned the pens between fills of different colours of ink.

Anyway, the lost-its-shine nib out of the two now rests with the dark blue pen. I didn't regrind it, but I did pull the nib and feed out of the threaded housing to inspect the extent of the dilapidation. I noticed that the feed was somehow forcing the tine gap to spread all the way to the tip when nib and feed are pressed together by the housing, or even just my fingers; and so I tried to reseat the nib after sitting the front end of the nib assembly in very hot water. Then I had to align the tines.

Now the pen writes like a true Extra Fine writing instrument, at the price of ink flow now being rather dry.

The green one, with all the (cosmetically, if not altogether) better components, will most likely end up being given away.