A glass nibbed pen from 1920's Japan (possibly made by Platinum), distributed in the US by Spors of Minnesota. What got me interested was the glass nib - daughter Charlotte has a glass nib dip pen, but she wouldn't let me try it, so I had to take drastic action and get one myself.

These pens are a pain to refurbish, as the original manufacturer glued the sections in place. On this pen I inadvertently cracked off the threaded end of the body while attempting to work it free (with a heat gun - sometimes it works, sometimes not), but the break was clean so I was able to use the rest of the body and slip-fit the cap. The original 1920's era rubber sac was of course long since perished, and I replaced it with a #14 sac normally used on Sheaffer Snorkels. The body is nitrocellulose based celluloid; I verified that by burning a sliver of the broken threads - it lit up like a flare! (I showed my daughter - she said, "You're such a boy!" As Trog says below, more delinquent attraction...)

One interesting aspect of this pen is the crescent filler (inset). I've never used a crescent filler before, but it works as advertised. The crescent says "Made In Japan", from the pre-WW2 days when that meant cheap, shoddy merchandise, as opposed to nowadays when it means the best!

Glass nibs are usable writing implements, I was pleasantly surprised. This pen needs a little priming prior to use if it's been sitting unused awhile - a drop of water on the nib gets it going just fine. I can bear down on multipart forms like checkbooks, or use a light touch as with a regular FP nib. The usable writing angle range is huge - all the way from 90 degree vertical, like I use for a ballpoint, to as low and close to the paper as I can bring the pen, so the standard 30-60 degree writing angle is easily managed. My nib was a little scratchy when I first tried it - a few swipes on 2500 grit sandpaper yielded a nice, smooth nib tip.

The pen seems to prefer a dry-writing ink - there is no formal flow control mechanism in the feed, as the nib IS the feed. (I've seen pictures of later Spors pens that had semi-hooded nibs - interesting ...) My first fill was with Skrip Blue, but I thought it flowed too wet, so switched inks.

As there are no metal parts in contact with the ink, I have the pen filled with an iron gall ink (Lamy Blue Black) and don't have to worry about the somewhat acidic ink ruining my nice glass nib - I'd bet that Bay State Blue and other non-standard formulations would also work without problem in this pen.

PhilM has a nice blog about his Spors pen refub.

It also has a dead sac, and I don't perform this kind of work on my pens, but I did get a chance to dip it, and they seem to be good little writers. I just might get a few more of these.

I too noticed a few SPORS pens flowing through that auction website recently... in some interesting mottled colors, too. I've been tempted, but those ones were offered with dried sacs and I just can't be bothered with installing a new one for now.

Glass nibs are definitely underrated. I'm glad to see more FPN folks getting into them. I've got one with a covered nib... I should write a review of it. It's not a bad pen... these do develop definite sweet spots from wear (and then you have to continue writing on a certain "side" to get proper performance).

Robert, thanks for the review and the link to Munson's refurbishing instructions.

I notice on the technical diagram in the linked page the statement:
QUOTE
Small hole here, can't blot or leak, also this hole can't clog as by pressing on the self-filler you can shoot ink through small hole three to five feet
This pen has a certain delinquent attraction!

Fallen in love with flex

Thanks for the link! I may have to break down and get a heat gun.

Thank you for this review. I had not heard of these pens before your post -- I think I would like to try one if I am ever able to do so. Thank you for expanding my horizons!

This is a cool pen. Congratulations!

I have a German glass nib pen. It is a HARO. It writes a very wet line. I use it sometimes for sketching.

It is not always the most valuable pen, you have the most fun with.

That's a fountain pen? Cool. The only glass pens I have are the dip kind.

I had a handsome Mondial BCHR with a Bohemian glass nib, but sold it as it did not suit me. Below is a picture of it.

Spors pens are great! They are crescent fillers, come in lovely colour variations, and can be bought for under $20 in good condition.
I had never seen solid colours on these before, only swirly. A red-white swirly one is on the way to me from the UK and it will be my first! 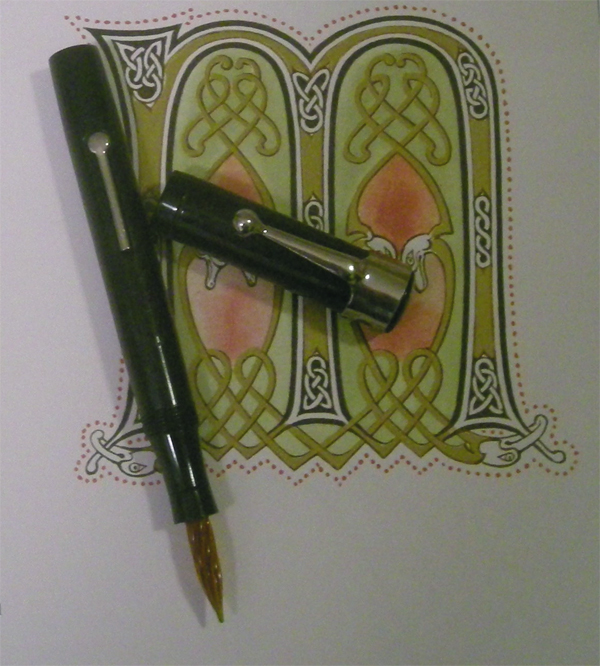 And this is an early '90s Visconti Ragtime glass nib fp (not mine):