A rather not talked about the MB Oscar Wilde.
I honestly never thought about this pen much until I got the chance to buy it.
I gave it a good hard look in the pictures and right away I recognized the signature of what looks to me to be the basic design of old MB pens.
It doesnt have the famous cigar shape of the Masterpiece line. The basic design is more 1930s and all you need is a flat top and it would be a true 1930s relic. 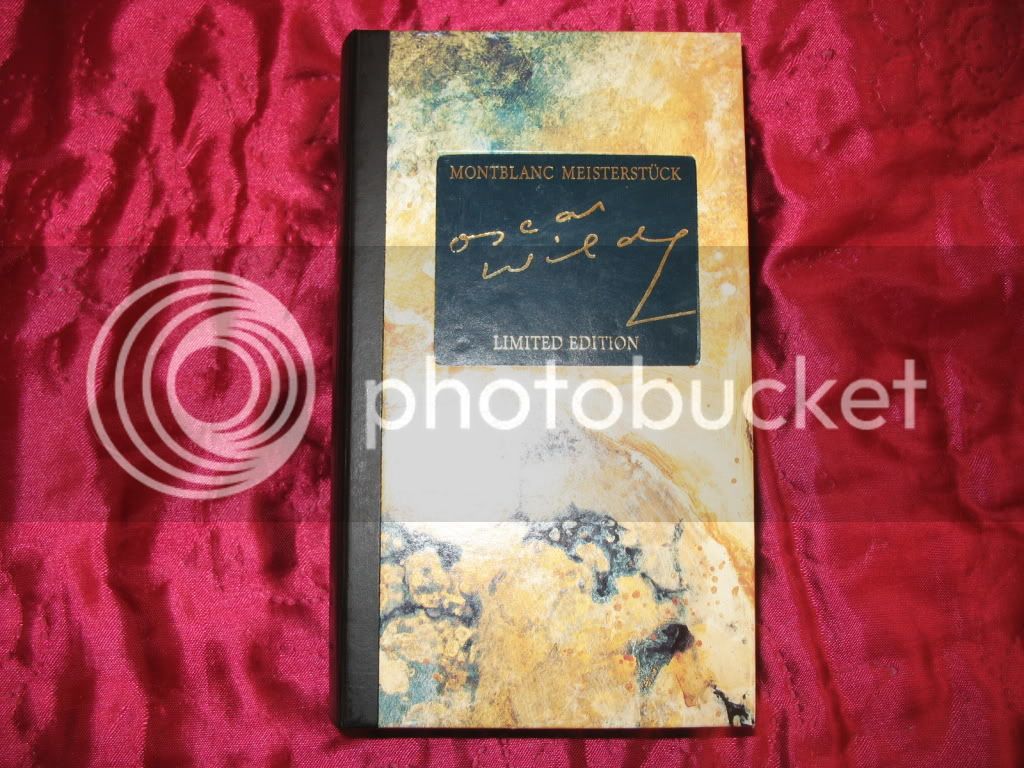 I will talk first about the first thing that hit your eyes and is probably the most known thing about this pen and thats its tiger skin like barrel.

It really is very striking even though not very shiny. It doesnt try to hit your eyes but still it does because its locked between two black ends.
Black cap at one end and a black piston turning knob on the other.
The effect is very special and unlike any other MB pen.

The cap is rather simple, two rings that are a bit rough to the touch, a vermeil clip with 925 stamped on it and a big snow flak at the top of it.

A bit disappointing is the very basic and simply nib design. I am used to eyes catching design on the nibs like the Snake, Roach, Wind Milletc and always thought this is one of the special and unique part of every WE pen and gives it a wonderful character.

In the hand the pen is like most WE pens.
Its medium waight and bottm heavy due to the brass piston location.
Its very comfortavle and easy to use.
As expected the piston filler is very smooth and holds an ample amount of ink.

The nib on this pen is Broad.
I really dont like B nibs and this nib is even more special as it feels stubby.
As far as I know this pen never had any work done to it so my guess is that the nib come like that from the factory.

Well guess what, not only I dont like B nibs I really dont like Stub nibs.
So my expectations from this nib werent too big.
To my surprise its much better then I expected it to be. Very smooth not too fat (feels like other M nibs I have on other WE pens I own).And the stub doesnt feel completely bad.
Unlike B or Stub nibs this nib doesnt completely disconnect you from the paper.
It makes the writing feel natural and flows comfortable and almost fun.
No I havent converted to B or Stub nibs. I still would take a good F nib over this nib but under the circumstances I could say I am happy with the pen and its nib.

I can understand why this pen is rather less talked about We pen.
It really is a simple pen. Other then the barrel this pen is very basic in every way but somehow as a whole it feels just right and slowly you get to like it more and more.
Like all other WE pens its not just a collectable but a pen that you can take and use all day long and enjoy every minute of it. Its comfy in the hand, not too heavy, holds a ton of ink and has a wonderful nib.
Consider it next time you are ready to buy a MB or a WE pen.

Now when Tzutzik saw the pen he became very very excited.I think he felt very much alike a TIGER and tried to see if he can roar and look scary.
Well he looked really cute and not scary (but dont tell him that).I told him he looked really scarry and he went to look at his buddies outside and dream how he eats them. 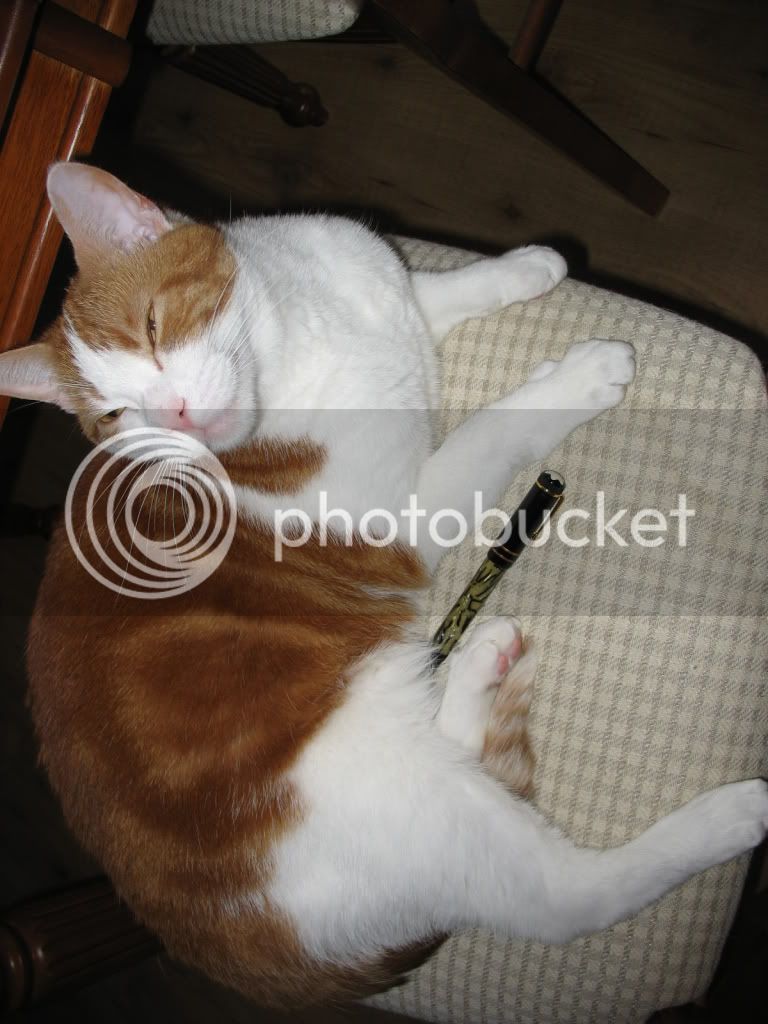 Looks like your cat is saying "Step off! This is my pen!"

Nice review brother and congrats on another WE!

Many thanks for the review and pictures.

The pens shape is correct; no flat top needed

QUOTE
...so my guess is that the nib come like that from the factory.

Yes, you might be correct. Depending on who made your nib at Montblanc "B" and "BB" nibs can turn out quite stubby comming from the factory! so I guess this nib is original. I think this fact often leads to the conclusion that Montblanc offers/offered factory stubs but they are really pretty straight broad nibs. This can be even more evident on older nibs. Some of them really write like modern stub nibs.

The cat is really awesome!

Oh, and nice review and pen too. I really like the tiger-like pattern and the vintage look of the pen.

I didn't know that the Wilde was such a small pen; no wait .... it's the cat being so big

In Germany cats seem to be much smaller

I wonder your cat is right or left handed

This is obviously now Zuzik's pen!

My 149 is like that. A straight B, but writes like a smooth stub, allowing for really fast writing.

Yes, I am afraid this pen don't compare to the Agatha Christie in the classic look MB.

Going to turn that nib into a fine?

Going to turn that nib into a fine?

Nah I dont like to make any changes with LE pens.
Its nice to use as is so I dont mind leaving it original.

I was wondering how similar the Wilde and Christie are? Are there any differences in construction besides clip, cap trim and color?

I was wondering how similar the Wilde and Christie are? Are there any differences in construction besides clip, cap trim and color?

The Christie, Wilde and Schiller all share the same basic form. Dostoyevsky as well, but to a lesser extent.

Another good review. Thanks.

The Wilde really is not talked about much here. I like the vintage-like design.

I have some MB nibs - M, B, and two BB - that have the "flat" stub-like feel to them. It is one of the characteristics I like about MB nibs. If you get discouraged with this B nib and decide to let the pen go, just let me know.

One of my favorite MBs. When it first came out 14 years ago there were few to no modern MBs that had this kind of marbeled plastic and this feature made it a great new design. Depending on whether you count the Dragon, this is only MBs third WE and an important part of MBs WE evolution of design. About those MB B/BB/OB/OBB nibs, the really great thing about them is that they all tend to be very stubby and make for a great writer. Hope you enjoy this fine piece of history.

I really like this WE because of the unusual pattern and coloration of the barrel. It writes as beautifully as it looks too.
Some the WEs have most of their unique features in the cap. Already owning a bunch of standard
Meisterstucks with plain barrels, I gravitate towards WEs with more unusual designs, textures, and materials.
Having said that, I would be happy with any of the WEs (just trying to rationalize not buying them all

I really like this WE because of the unusual pattern and coloration of the barrel. It writes as beautifully as it looks too.
Some the WEs have most of their unique features in the cap. Already owning a bunch of standard
Meisterstucks with plain barrels, I gravitate towards WEs with more unusual designs, textures, and materials.
Having said that, I would be happy with any of the WEs (just trying to rationalize not buying them all

Respect to all
Back to Fountain Pen Reviews