20 replies to this topic

This is a review of the limited edition Aurora Optima demonstrator (red-tipped version) fountain pen with italic nib. Total production is 1396 pens and this pen is marked #0450 on the cap. There was a lot of buildup regarding this pen starting in late July or early August. While shopping at my local pen store, without much luck I might add, I was told to expect the Aurora Optima and Pelikan M800 demonstrators sometime in late August. It was suggested that I save my money for one of these two pens.

Another few weeks later I was again surfing the Internet for pens when I happened upon the demonstrator again on another website. This one had better photos and a verbal description as well as a more attractive price. On a whim I called my old pen store to see if they had the pen. They did, and they praised its qualities. In addition, I was extended a deep discount on the pen that priced it below any Internet retailer that I had yet seen. Thus, my pen lust was given an outlet. I wanted an italic nib because I had previously heard good things about Aurora italics and because I thought that a special pen had better have an interesting nib. The pen store did not have one with an italic so they had the distributor ship one to me at no initial cost; if I did not like the pen all I had to do was ship it back! Within a week I had received the pen. It arrived in the largest, strongest box Ive ever seen for a pen. The metalized wood packaging would have protected delicate electronics let alone a fountain pen. Clearly, Aurora thinks highly of this pen. Contained in the box were a more-or-less standard literature/instructions pamphlet and a personalized bottle of ink, which I did not open since I have gobs of ink already. Suffice it to say, the pen is stunning to behold. Totally transparent except for the red auroloide ends, the inner workings of the pen are clearly visible. I dipped the nib into some Sailor red-brown ink and tested it for about five minutes before I placed the phone call to pay for the pen. It was almost immediately obvious that I had to have this pen! True to what I had heard about Aurora italics the nib is very nice. It has large line width variation between vertical (wide) and horizontal (thin) strokes and it smooth when used at the intended angle. Even when tilted beyond the normal working range the nib does not badly catch or snag, which is remarkable for an italic nib. Aurora nibs can be on the scratchy side of smooth. Although a good writer, my Talentum nib is a little scratchy and so was an Asian limited edition nib that I almost bought. The italic nib on the demonstrator is almost completely scratch free although not butter smooth. Some might call the Aurora scratch feedback. The ebonite feed provides ample and consistent ink flow that never hesitates at startup even after sitting around. The piston reservoir holds a lot of ink, which is good because the italic nib can really lay down a bunch of ink. Medium-large in size the pen balances best when posted. The fit and finish is outstanding and the large cap band is a nice touch that should keep the clear plastic from ever cracking. The pen feels solid and positively reeks of quality. Like my other Aurora pens the Optima is a very good writer. Combined with this are fantastic good looks and limited edition exclusivity and cachet. Some may prefer the totally clear model but the red really pops, possibly drawing more attention. Either one would make an excellent addition to anyones pen collection and is good enough to be an only pen. High praise.

Nice review, jandrese, and some good photography. I own two Optimas. One has an italic nib  and it is just as you say.

I had a chance to examine the demonstrators in person this past weekend with my pen dealer. These pens are winners

I liked the red capped one best too.

Thanks for the review! I have my eyes set on the colorless Optima Demo. Do you have pictures of the presentation box?

Well, you made my day. I can go bed now. Thank you for the good pics and an excellent review of a pen I can only dream about!

It looks like this pen has a captive piston filler system, instead of a true piston fill. Can you verify ?
Auroras pistons are true, 1930s style-Pelikanesque pistons.

I've had my eye on this pen also. Some have complained of the high price but it looks like a real winner. I also have an Omas Demonstrator that I love. Thanks for the info. Are you able to post a picture of the box?

QUOTE (dparker999 @ Oct 19 2008, 01:16 PM) <{POST_SNAPBACK}>
I've had my eye on this pen also. Some have complained of the high price but it looks like a real winner. I also have an Omas Demonstrator that I love. Thanks for the info. Are you able to post a picture of the box?

Here is photo of packaging. Here is photo of packaging.

I am toying with an idea of getting the Aurora Optima Demonstrator (red with a fine nib, as my Europa pen has a medium nib). Is a 25% discount off the standard retail price a good deal?

To the OP, are you using it on the daily basis? It is such a nice and clear (apparently) pen that I might hesitate filling the pen with ink.

Well, I don't use it every day, i have too many pens for that! But, I'm using it right now. I've filled it with Sailor Red-Brown a couple of times, and now with Aurora Blue. It has not stained yet. I don't worry about it, and take it with me wherever I'm going. It is a solid, nice writing pen that just happens to be highly attractive and rather expensive.

If you like it, go for it. It is an easy pen to be happy with. Too bad it came out at the same time as the Pelikan 800 demonstrator, and at such a high price. I'm told the Pelikan demonstrator has really outsold the Aurora. The Pelikan looks good, but the Aurora is, to me, much more desirable. Then again, I already have some 800's and I did not have an Aurora piston filler. The only thing "wrong" with the Aurora is the ink capacity. My pen is fitted with an italic nib and it puts down a lot of ink! Compared to all converters, and some piston fillers though, it holds a lot ink, and with a different nib fills would last longer.

To the OP, are you using it on the daily basis? It is such a nice and clear (apparently) pen that I might hesitate filling the pen with ink.

This pen, specially with that nib, is a dream. Shame is way of of my budget. Gorgeous! 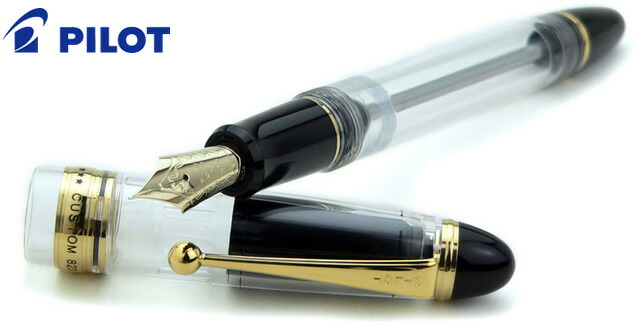 Is an italic nib one of the standard nib options from the factory? A few web retailers only give me an option of F, M, or B. No italic option.

Great review, I'd love to see a sample of the writing you get with the nib?

The rung of a ladder was never meant to rest upon, but only to hold a man's foot long enough to enable him to put the other somewhat higher - Thomas Huxley

I decided to go for this with a F nib. I already have an Aurora Europa with an M nib. An M is too wet for my writing style. So, an F should be a good match for me.

+1 on the writing sample. Show us your lefty overwriter chicken scratch!

Ok, the chicken scratcher will work on scribbling something!

Here ya'll are. Paper is crappy HP office paper. Ink is 14 year old Parker Penman ebony writing ink. I dipped the nib only so there is copious ink flow, especially at the start. As you can see line width variation is large and you can easily write cursive. Sorry for late, I saw this only today.
In this thread (it's from an italian forum, but images should be good anyway) there are some photos posted by roberto (roberto v also here) of an "original" Aurora Optima from '30s.