Yes, the car is mine.

First review here, just a simple pen I picked up on a whim.

1. First Impressions  7.0/10
I found the pen in a small corner display cabinet at a Sierra Trading Post, among other pens, watches, and small items. I chose this one as it was more visually appealing than the others in combination with the price I was willing to pay at the time. The pen came in a small green box with a nearly faux leather finish with silver border lines around the edges, inside a cream colored velvet-like pillow with a band the pen was clipped to and the included cartridges and converter were tucked under. There was no documentation with the pen, but I wasnt concerned, a cartridge pen cant be that complicated.

2. Appearance & Finish - 7.0/10
The pen is a very transparent white/silver with black/grey swirled acrylic (I think) bodied pen, which chrome end caps and clip, and a standard black plastic section. The material of the body of the pen has very tiny glittery specs, for just enough iridescence to be noticeable. It came highly polished, no real visible problems aside from the Monteverde mountaintop logo on the cap; it seems very poorly carved/cut into the chrome leaving whatever metal under the chrome exposed. The cap and body fit together via threads, which can be easily seen as the material used is very transparent. It screws together snugly, and the cap posts on the body to be held by friction, but again fits snugly. 3. Design/ Size/Weight - 8.5 /10
Again, the main body of the pen is what I guess to be acrylic, although celluloid is a possibility. Its a very small pen, capped it measures 4 ¾ inches from end to end. One interesting feature is that the cap is actually larger than the body of the pen if the nib isnt included in the measure- the cap alone is a good 3 ¼ inches long while the main body of the pen is only just past 2 ½ inches. One thing to note- although the pen did come with a small plunger style converter, it will not fit in the barrel of the pen if it is extended at all, so this is a small cartridge pen only. This is definitely a pen you will want to use while the cap is posted. Both ends of the pen are covered in large chrome caps, which add a significant amount of weight to the pen, but to not result in an overall heavy pen- its quite comfortable (to me at least). It weighs in at 31.7 grams with a cart about half full- about twice as much as my 40s Sheaffer Statesman and Parker 51 desk pen. Overall, this is a very nice pen to carry around; Ive had no problems carrying it around clipped to my shirt over the last week. 4. Nib Design & Performance - 8.0/10
The nib is a medium pointed German Iridium tipped nib- fairly generic. Most of the nib is golden-colored and decorated with some engraved swirly lines. Its a non-flexible solid medium to bold point. I would much prefer a finer point, which could be (and probably will be) swapped to at a later date, but this nib does write very well after some work. I did not use the included ink cartridges beyond emptying the ink from one and immediately filling it with my own ink. At first, the pen was skippy, this was remedied for a short time by adding a drop of ink directly onto the feed. After sitting overnight though, the pen refused to start writing. Another drop of ink onto the feed, and it wrote for a while, and then stopped again. Ultimately I had to completely disassemble the pen down to each component part (friction fit nib, basic plastic feed that screws into the section), which I then put into an ultrasonic cleaner with just some water and a splash of generic pen cleaner. Two cycles through to be sure, everything dried and reassembled, as soon as I reinserted the topped off cartridge the pen immediately began to draw ink from the cartridge and started writing no problem. I have yet to have another hard starting problem.
Its very smooth, no toothy feeling, no scratchy noises. This is easily the smoothest nib I have written with. With Private Reserve DC Electric Blue ink, it writes fairly wet, but dries quickly enough to not be a problem. It does skip on fast strokes, but not enough to cause problems in normal swift writing. Overall, very happy with how it writes. 5. The Filling System - 6.0/10
Again, this is solely a small cartridge pen since the small converter will not fit into the barrel. Despite the small size, they seem to be holding about enough ink to last a week. I would prefer if a converter would fit, as it would make using my own ink easier, but I can just as easily refill the empty carts using a syringe, but I do have to mark it down for this.

6. Cost/Value - 7.0/10
The pen retails from $70-90 as far as I can find, but I got this on clearance for $40. That was one of the main selling points to me. They had a few cheaper FPs available, but I did not care at all for the looks of them. They also had one more standard looking and sized pen, which the same nib and cartridge filling system (but with a longer barrel the large converter that pen came with would work), but it also had a price of $60. Had I been looking for pens I would have gone with the other one, but I was there shopping for new shirts, finding the pens was happenstance so I went with the cheaper one. After cleaning, the performance of the pen is well worth the price. Down the line Ill look into getting a fine point nib for the pen, assuming its not horribly expensive.

7. Overall Opinion/Conclusion - 8.5/10
Overall I am pleased with the pen. I wasnt completely sure about it, as its not exactly a major name brand, but it does perform and look the part. All my previous experience with FPs is on vintage ones- with minor repair needed before use and nibs that need slight tuning. This one blows them out of the water as far as the performance, buttery smooth writing, good tight fit and finish, and a clean modern-ish look. Im sure this is an older model pen (at the latest a 2006 model) as the Monteverde website doesnt list it any longer on their 2007 or 2008 products, but on clearance its to be expected. Id have no problem recommending this pen if it fit the bill of a small good quality pen that someone was searching for. Thanks for posting this review of an interesting looking pen. Certainly a fun acquisition at the price you got it!

Thanks for the review, and I think you have a nice find there. What a neat-looking little pen, but not so tiny or thin that a variety of users wouldn't find it comfortable. I'm glad you found your tweaking worthwhile, and isn't it sweet when it results in a good writer.


Edited to add that your ink and handwriting are a knockout. Thanks for the sample!

The Intima was one of Monteverde's very first models. It's innovative design was one of the primary reasons I started carrying the brand many years ago. It was followed shortly thereafter my the similar Charisma line (both now discontinued as fountain pens, but still available as convertible pens...ballpoint, gel and rollerball). Here's the Charisma: 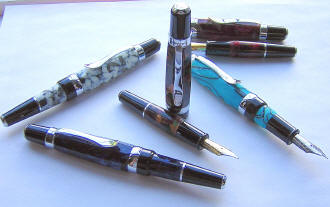 The material is resin, not celluloid.

Good review in that it answers a question or two for me. I bought one of the "new" intima neon greens. Black M nib. Like you, it was not "good" out of the gate. I flushed mine, reassembled it and it did not help. Like you I then tore it down and put a Noodler flex on it. It now feeds fairly well, it starts and skips some. My next step will probably be to use Diamine or Waterman ink.

I talk to CS and was told to twist the feed assembly in the barrel. Have not tried it as yet. Twist too much and it will leak I think.

Super interesting lil' tyke. Not sure if I could ever find a pen of that size comfortable but I guess if its posted, the ergonomics won't feel that much different from a regular pen. What would have been cool is threading on the butt of the pen (like the Nemosine Fission) to hold the cap posted securely.

Nice review. This looks much more like a Faber Castell e-motion. The resins look amazing.

The lapis blue and the flex seems to have solved the hard start and skip, although it is a little wet for my liking.

I would be tempted to say the culprit was the cartridge, I put the Monteverde M in my Jinhao "Dragon" and it seems to enjoy the change of scenery.