I admired the modern Conway Stewarts for a number of years before finally making a purchase. This ebonite Duro was purchased direct from Conway Stewart a couple of years ago at the Northern Pen Show. The photos were taken at the time I purchased the pen.

At the time I was buying this pen is was a choice between the Centenary Collectors Pen and this Duro. As the Duro was on special offer at almost half price, I opted to buy this pen. For me it's not a small pen, it's more or less identical in size to the Parker Duofold Centennial, but is a lot lighter in weight meaning it's a more comfortable pen for me. I'm a very petite 5'3" and so accordingly have small hands, I wouldn't feel comfortable using a pen that was larger than this Duro.

This is a smelly pen to write with, you can certainly tell what material it's been made from and it's one of those pens that I've really grown to love over time. The ebonite is beautiful and is well complimented by the yellow gold.

The imprint on this pen isn't quite as distinct as on my other CS pens with the U and O of Duro being very faint.

It came with a medium nib which I could write with, but it was a little too wide for my liking, so after one fill of ink it went back to Conway Stewart and was swapped for a fine nib. Sadly the new nib was one of a faulty batch and skipped terribly, it was impossible to even write a single word without sections being missing. It went back to CS and again had another nib swap. The new nib was so sweet. Incredibly smooth and quite a wet writer, it really does make it a wonderful pen to write with.

Thanks for these Conway Stewart reviews - it helps me highlight which of the models I should be looking for in a vintage/2nd hand model. This one certainly looks fab!

Photographer and lover of all things Celtic!

Thanks indeed Carrie.I just received my classic green Duro yesterday and hope to review it later after the Portland Pen show,which is a few hours from now.

Oh no, this one's got the photos missing too! Bring them back Carrie, I need them so!
(Yup, I'm obsessively browsing the CS reviews!)

BTW, I agree that the CS Duro and the Parker Duofold Centennial are the same size.
Large, handsome pens. These are my husband's (formerly mine): 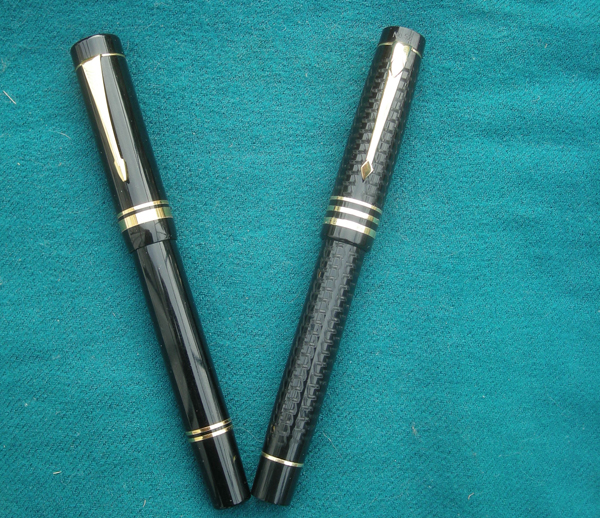