I will post a review of this wonderful pen shortly, but for now here's this! 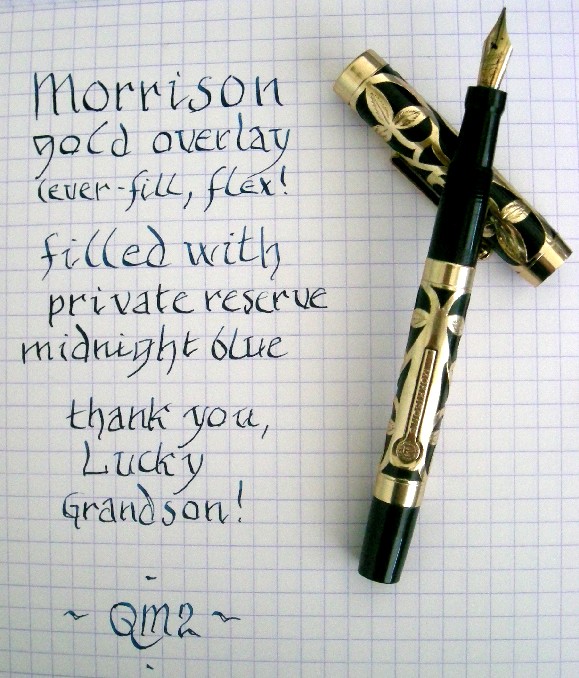 [The writing is my first time using a flex nib,
it is not meant to be a calligraphy sample!]

I'm generally not a fan of the overlay but that's a real nice looking pen.

I'm generally not a fan of the overlay but that's a real nice looking pen.

Thanks! And I am usually not a fan of gold, to the extent that I do not even buy pens with gold trim. But this one called out to me, and I am very glad it did. One more photo before the review: Here is what it looks like capped -- 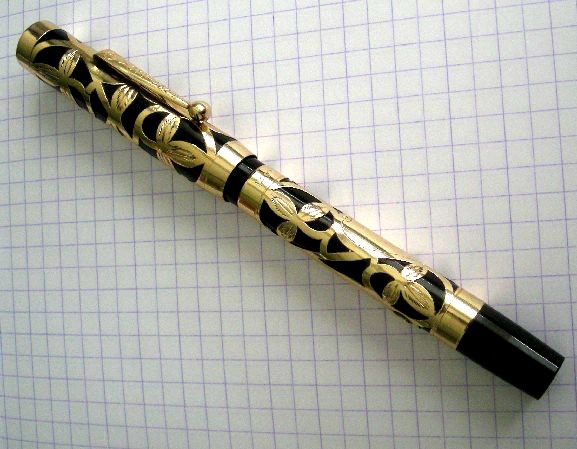 Thanks! And I am usually not a fan of gold, to the extent that I do not even buy pens with gold trim. But this one called out to me, and I am very glad it did.
Agreed. I don't own any pens with gold on them. I'm not a fan of yellowy metals.
Glad you like it though. It's always nice to be surprised about something you're not certain you'll like.

That's just purely gorgeous. For a pen like that, I'll make exceptions to my silver collection.

This was my first vintage overlay and my first true vintage flex (I do have another, but it is less flexible). I bought this pen from FPN member Lucky Grandson, who I must say is a true gentleman in conducting Greenboard transactions. I just hope this review does not make him regret selling me the pen : )

I had seen the seller's photos of this pen prior to purchase, and they looked great. I had wanted a vintage filigree overlay for quite a while, and I had wanted to try a flex nib. This one was being sold at a good price, so I bought it. I expected the pen to be in restored condition as stated, and I expected it to look pretty good, as shown. But I did not expect the impossible: That is, I did not expect a 78-year old pen, crafted out of fade-prone hard rubber and thin, ding-prone overlay, to look shiny and new. But... it did. When I removed the pen from the packaging material, it was in a condition I can only describe as "shockingly excellent". I do not know what the seller did to clean and polish this pen, or whether it was simply luck and the pen happened to be exceptionally well-preserved. But the pen gives the impression of being flawless. The hard rubber is evenly black, the overlay is blindingly shiny, and there is not a speck of dirt on the pen. It took me days of intense scrutiny to notice its mini-imperfections. But even knowing they are there, does not change the impression of perfection that this pen projects. Every time I see it, I am startled by how great it looks.

Along with the pen, the seller also included ink samples and a note with some advice about using the flex nib, since I had told him I'd never tried a true flex before. That was a very nice surprise and much appreciated.

This is a classic flat top overlay of the sort produced until the 1930's. From the information I found online, it seems to be a late model, most likely c1930. Morrison was not a 1st tier company, but some of their pens, including the overlays, were excellent.

The pattern of the 14K overlay is "Filigree", the motif featuring curling 3-leaf clovers. The overlay is on the thin side, but not the thinnest I've seen. Imprints are excellent, and there is a great deal of detail in the design. The name plate is somewhat heart-shaped. It is free of initials or scratches.

This is a slender and lightweight pen. I believe as far as overlays of its time period go, it is a medium size. The BHR section is very comfortable to grip.

Lever filling system has been restored to excellent working order and functions smoothly. The lever is what I believe is called a "spoon" lever. It is large and looks particularly charming, with the Morrison brand name engraved along the lever. The prominent round "spoon" part makes it easy to use.

This is one of the pen's exciting features. It is a true vintage flex, going from an XF to a B. I have tried to use flex before, but could not get the hang of it. Then, with this pen, suddenly something just "clicked" and it seemed natural. My first ever try at writing with it can be seen int he original post of this thread. Since then, learning flex has turned into a fun and relaxing pastime. Something I thought just wasn't for me, has become accessible thanks to this lovely pen.

The price of this pen can still be found in the original Greenboard post. I feel this was a great deal. Without a doubt the best value vintage pen I own.

Out of the half-dozen or so vintage pens I now own, this is undoubtedly the star of the show, and I have a feeling it will retain this status for quite some time, even with further acquisitions. Sometimes you get lucky and acquire a gem. This was one of those times for me, and once again I sincerely thank the seller for this great item.