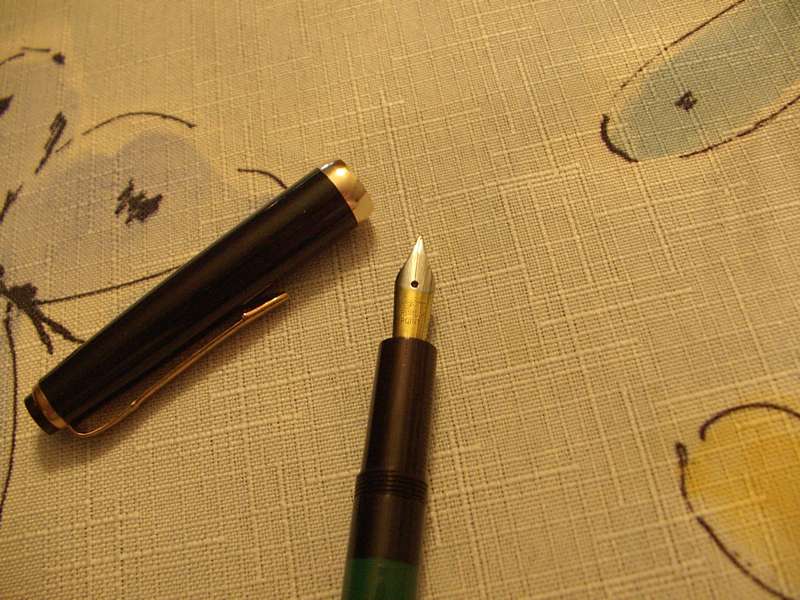 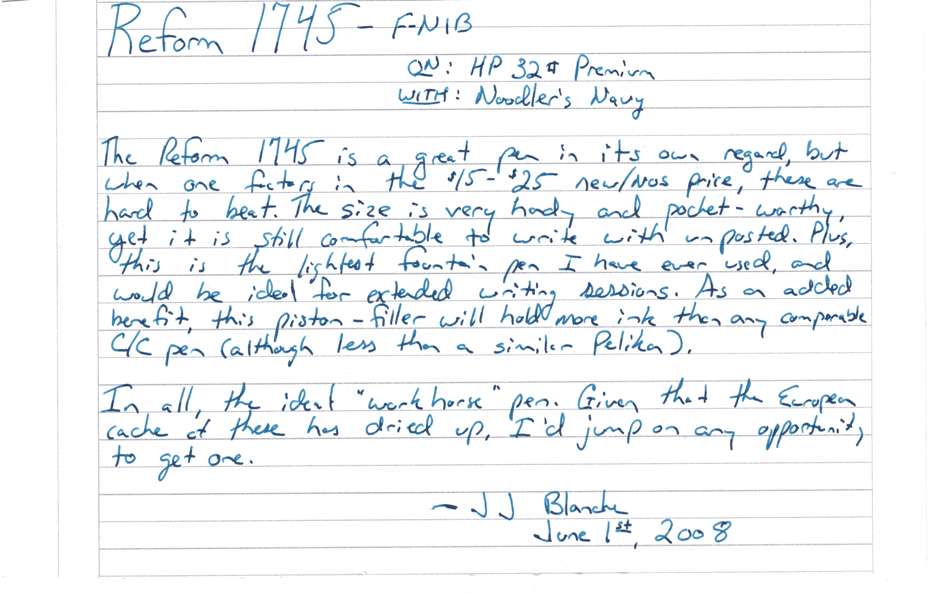 The following categories are weighted based upon what I feel is important in a pen.

First Impression: 10 out of 10
My definition of "first impression" is, generally, how the given pen stacks up against my preconceived notions/expectations upon first in-person viewing. In the case of the Reform 1745, those expectations were surpassed. It is a solid and well put together pen, and is outwardly quite attractive, arguably more so than any other pen in the under $50 segment.

Appearance: 15 out of 15
I judge appearance after I have lived with a pen for a while. The Reform continues to impress with its understated green/black design. I've gotten several compliments on it thus far, and have only had it a week. Not unattractive or cheap looking in any way, and satisfies many individual variations in taste/style (a universal aesthetic, if you will).

Filling System: 14 out of 15
The piston filler is my preferred filling method, and the 1745 employs it to great effect. It will hold more ink than any C/C pen, but less than a Pelikan (because of the thinner barrel). The piston is not as smooth as a buttery Pelikan, but is perfectly acceptable, and would not have been noticed if I hadn't previously used a Pelikan.

Ergonomics: 20 out of 20
Ergonomics = how well the pen handles, and how comfortable it is to write with. The 1745 is slender and very light, and yet long enough to write with unposted (my preference). It is a bit longer, yet thinner, when compared to either the Pelikan M150 or M200. It is thus a good pocket pen that will take up slightly more space than the average Bic. I can't think of any reason to subtract points in this area.

Nib: 17 out of 20
The nib on my 1745 is quite smooth, and (surprisingly) has a bit of flex. It is, however, on the dry side of average, and can thus be picky when it comes to which inks it writes well with. Nothing significant, but not perfect, and thus not a 20. That said, this is still the pen I use every day for all my standard writing tasks, so the 1745 nib will satisfy all but the most demanding users...who are probably not shopping in this price range anyhow.

Cost and Value: 20 out of 20
Simply put, you will not find a pen with better cost to quality ratio. In my opinion, this is the best pen under $50, unless you can find a Pelikan M150 for less than $50. Even then, the 1745 offers such an extraordinary value that it would make you think twice about purchasing the Pel.

I've found that my Reform 1745 has a hard time keeping up with me when I am writing fast. I do agree that it is somewhat a dry writer - that's the only problem I've fond so far. And yes, it is very light!

It's just a matter of finding the right ink. I see you're running a Waterman through it, and I'd suggest you look at one of the more saturated/heavier flowing inks. If a green is what you're looking for, I highly recommend Private Reserve Ebony Green. It flows very well in the 1745, and is the best green I have yet reviewed.

After running twenty inks through my 1745, I've found it works best with Noodler's and Private Reserve.

Nice review, I have a couple of these that I use mainly at home, overall good pens especially for the price, only problem I have found (apart from being slightly dry writers, but not too bad, depends on the ink I find) is they are rather slimmer than most pens I use, so I find them a bit 'tiring' after a while.

I just got one of these with the nib retouched by lexaf- a true gentleman. I do get a slight leak- any tips for how to resolve? Otherwise, the handling is spectacular.

I got four of these from JJBlanche, all tuned to a wet F, and they are EXCELLENT value for money.

I also got one from JJ, and it sits in a desk holder next to my computer monitor, the first pen I pick up to make a quick note on a post-it to stick to my computer. As noted, a bit dry and a bit small for my hand, but a practical and fun pen that will write quickly even after not being used for a bit. It's become a favorite. Mine is filled with PR Tanzanite, which flows very well.

I'm Andy H and I approved this message.

Where do I find these pens now? Can anyone send me in the right direction?

Where do I find these pens now? Can anyone send me in the right direction?

When you're good at it, it's really miserable.

Well, I just received them in the mail today. Hint; clean them first before filling. Dah. I made the mistake of thinking the first one was faulty and would not flow and tried to slightly adjust the slit in the nib. I bent the tip. The second one did the same thing until I washed it out with warm water. Now it works fine. Wish I had figured that on the first one. How do I fix it, if at all?

I just ordered a Reform 1745, any suggestions as to inks? My two preferred inks are Noodler's Bad Black Mocassin and their LIberty's Elysium (an exclusive at Goulet Pens). Noodler's Baystate Blue is lovely, but not a permanent ink; therefore I'm somewhat restricted in it's use.

Thanks in advance -- Leon

See post #7 above.  An ink with good flow will probably suit the pen better than a drier ink.  Hope you enjoy the pen -- I like mine.

I've used a variety of Waterman ink colours in my 1745 and it writes superbly.

(Currently have it teamed up with Waterman Serenity Blue.)

Long reign the House of Belmont.

Thanks for the review, I agree with it entirely, with the exception that I find the slight dryness to be of benefit to me for the most part.  I use my 1745 as one of my daily writers, usually paired with a second pen with a broad, stub, or flexible nib (and less traditional ink colors).  The 1745 being a bit dry makes me more likely to reach for it when I need something that writes reliably and smoothly, but also don't want to have to worry about smearing and bleed-through.  Anyway, that's my two cents.

The Reform is a very nice pen, even if it can be a bit dry at times. Still, you can't beat it for the price. I bought mine on eBay for less than $10.

And the tiniest "schmeer" of TWSBI lube inside the barrel will give you the slickest piston ever imagined.