Earlier this year, Pilot released the Legno 89s, a rather cute and quite small mid-range fountain pen. 2007 marks the 89th Anniversary of the Pilot Corporation, and several new pens were released to mark the occasion:The Legno and Quattro pens both feature an open-grain (as opposed to sealed/varnished) "wood" finish - which is actually a resin-impregnated compressed laminated wood product. Both barrel and cap are lathe-turned from this solid yet light-weight material. The cap-wall thickness is about 1.5mm, the barrel would be similar.

The Legno 89s is available in Black and Deep Red, and features a rhodium-plated 14K nib in F, M or B width. 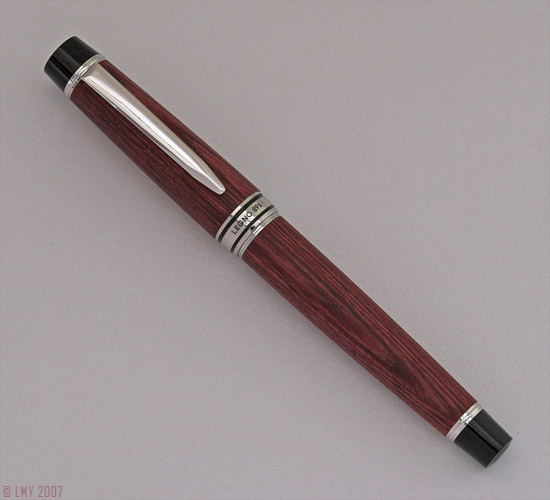 The Legno came inside a nice presentation box with neat cardboard outer cover, accompanied by a Pilot CON-20 converter, a Black Pilot cartridge and the instruction / warranty booklet.

Initially I was concerned about the body material  wouldnt it absorb moisture and oil? Wouldnt it turn darker from use as it would be getting covered with my fingerprints? Unlikely... compressed wood products are generally manufactured to have high wear resistance, chemical and oil resistance, and water resistance - in addition to having low weight and high strength. Now, I didnt drip black ink onto the surface  but I think that if ink were smeared on it (having come from your fingers from filling, for example) that you would be able to wipe it off with a damp cloth, and little harm would be done. The exception here may be Noodlers Bulletproof or Eternal ink  but who knows. 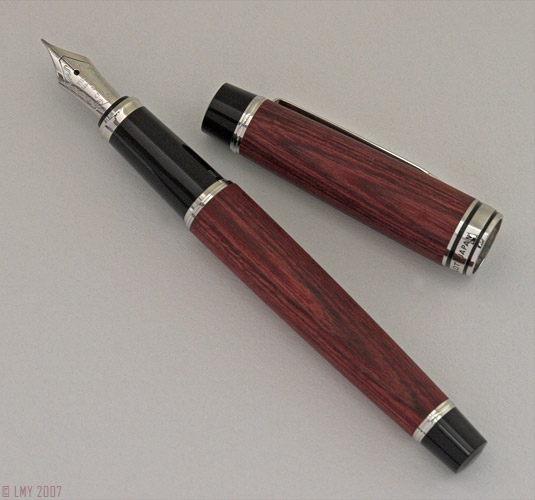 To be on the safe side, I have treated my pen with some liquid carnauba wax. I did the barrel first, and then buffed it and compared it to the cap  no colour difference, no added shine. What can I say - I'm a perfectionist, and I felt I had to do something to preserve the surface, even if it was unnecessary. I feel much better now.

On eBay, I have seen the following statement attached to descriptions concerning the Deep Red Legno 89s: Pen body is made of Kabazai CHERRY wood from Hokkaido, northern part of Japan. In Hokkaido, trees produce quality and beautiful woods due to temperature factor and better quality woods all come from Hokkaido. PILOT has chosen very rare Sakura tree wood for this pen. This is not a cherry wood / sakura wood pen  the pen body is made from a compressed wood product.

The clean lines, bright trim, and black jewels with flat-top styling make the Legno 89s a very attractive little package! The push-cap is nice; it always seals firmly and in addition posts firmly on the barrel.

The Legno 89s actually shares many design similarities with the Pilot Custom 98  including a design negative: The metal trim ring / section fitting at the bottom of the grip section. Annoyingly, Pilot really likes this trim ring idea and uses it on many pens. 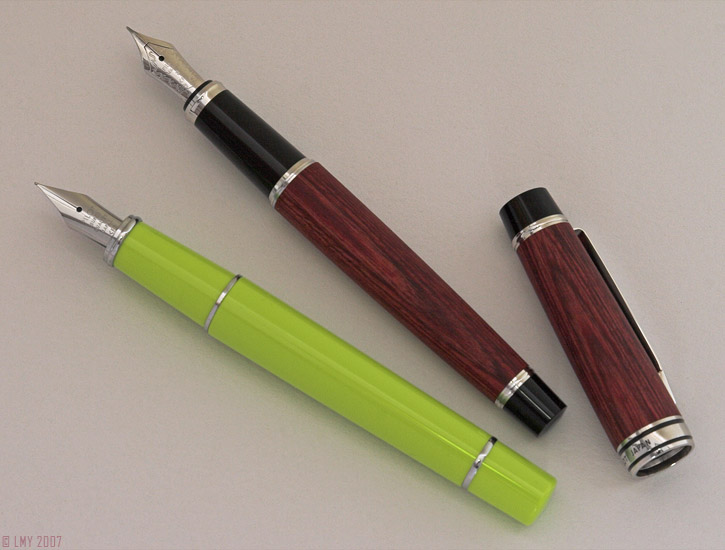 The Legno 89s has the same grip section and nib unit as the Custom 98  the difference being the 14K #3 size nib is rhodium-plated. Another difference is that the Legno is only available in F, M and B point sizes. 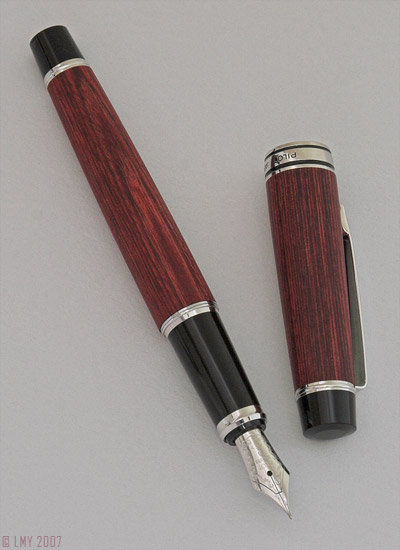 I ordered an F nib, and was very concerned because Japanese EF nibs are my preference. However, I thought the Legno cute enough to risk buying an F. Luckily, everything turned out perfectly  the nib is very smooth and the flow is just right for the line width. The rhodium plating renders this nib as only springy, rather than actually soft like the same un-plated nib on the Custom 98.

The Legno 89s accepts a standard Pilot CON-20 squeeze-converter, the Pilot CON-50 piston-converter and Pilot cartridges. I use only cartridges in this pen - which I refill with a syringe. This is neater and the cartridges have a better capacity than a converter.

The Legno 89s retails for $115 or so. As always, eBay and street prices are much lower.

Because of the small size, the Legno 89s is hardly a daily workhorse, but it is a very enjoyable little writer, and something a bit different! Mine is currently filled with Noodlers Red Black and resides in my purse along with my mini day planner  a pleasant and stylish combination.

Thanks for a great review. Great photography always adds to the review.

Thanks for another wonderful review and fantastic pen photography Laura! Keep them coming !

Thanks for the comprehensive review! A really nice pen indeed. (Incidentally, would anyone have tried out the Quattro 89? Have been eyeing one for sometime...)

I'm so impressed by the research that went into this review--you certainly don't encounter this kind of info from any single purchase site in Japan! I particularly like the way Pilot decided to produce a pen with a natural material (wood) that in color, material properties, and performance points to the skilled confluence of nature and technology. And as usual, your photos are amazing. Thank you.

can someone compare it with safari...

I think the Legno is a wooden version of the Stargazer.

You should be able to compare it with a Safari at the Pen Plaza (gouletpens.com)

I think the Legno is a wooden version of the Stargazer.
You should be able to compare it with a Safari at the Pen Plaza (gouletpens.com)

Funny that this old review should pop back up - I saw a Pilot ballpoint a few days ago while searching for refills with the same wooden finish. i had no idea Pilot had used it on an FP too!