I have 2 black inks that I like a lot.  Aurora Black and Pilot Iroshizuku Take Sumi.

I've decided to compare them and figure out which one is my favorite, because I rarely use black ink and technically just want one.  As a result of the comparison, I'm more confused than before I started.  They both have their strengths and weaknesses.  The posted samples below are limited to very fine nibs for writing and sketching.  Take-Sumi shows more obvious shading with broader cursive italic nibs.

Aurora is highly lubricated but has more conservative flow vs velvety but free-flowing Take Sumi.  It's easier to control line width with Aurora.

Take-Sumi washes off more easily with water / water brush, smearing off a heavier amount of loose dye.  The remaining dark line is more smeary looking and also feathery with Take Sumi, whereas Aurora Black keeps a neat black line under the smeared dye.

Take-Sumi can be a deeper black in the dark areas, but it's slightly blue-tealy tinted, and also there's a beautiful gentle shading gradient visible even with Extra Fine Japanese nibs!  Aurora Black is pretty much just a flat black, almost no shading, looks a bit like black laser printer ink. I'm describing this qualitatively, because it's difficult to tell from the scans, but Take-Sumi definitely has a more watercolor look with deeper dark areas, where Aurora is either straight black or a grayish solid color depending on amount in a line.

Take-Sumi is more difficult to wash out of a pen: takes longer, quite a few flushes.

For writing: I love Take-Sumi

For drawing and Calligraphy: Aurora might have the edge.  I like that it's a bit more neutral and much easier to control with a water brush for gradients, where Take Sumi just smears off more heavily with a water brush. 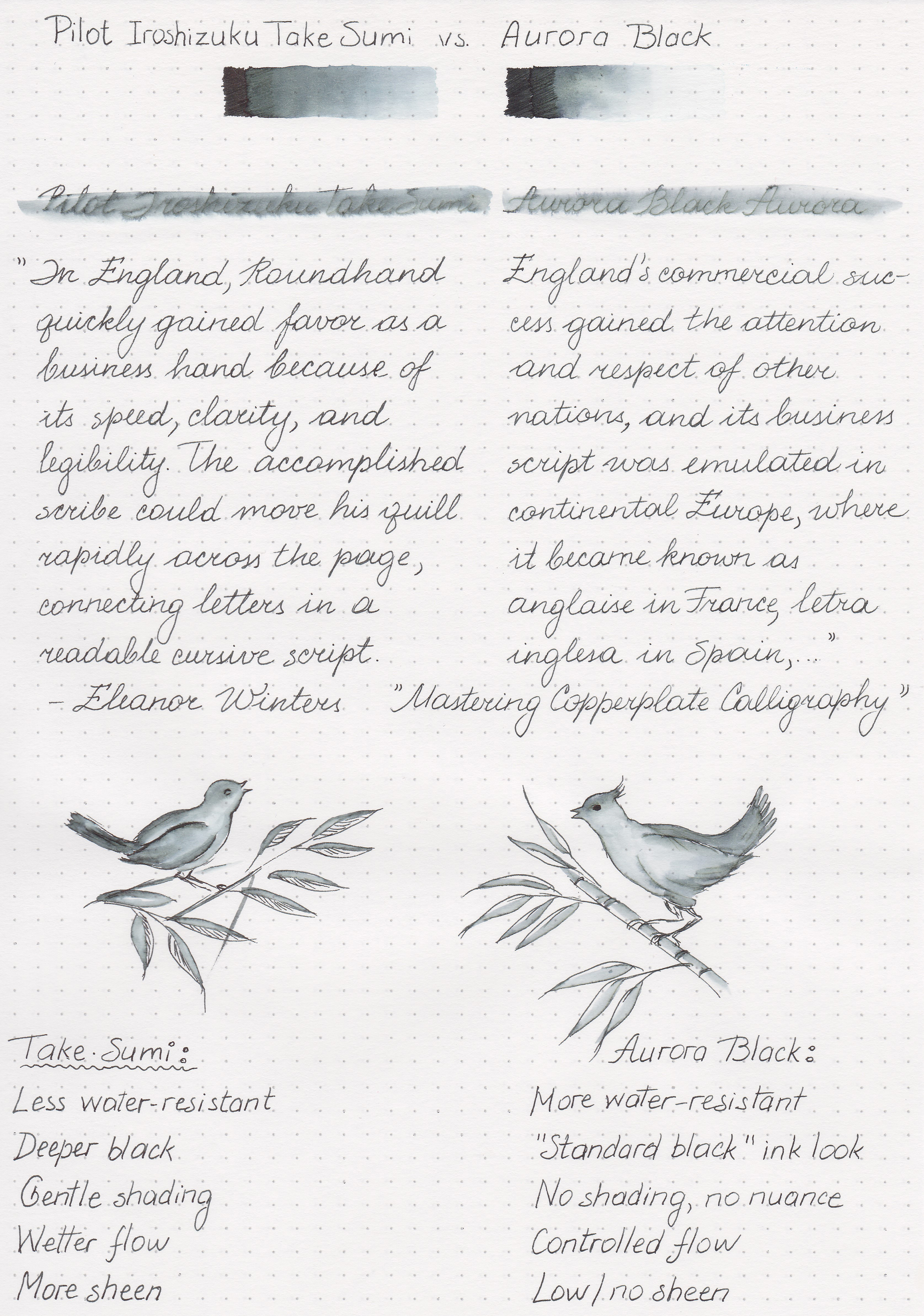 Aurora black is my absolute favorite ink, period. Nice black lines. I do have a pen or two currently inked with take-sumi as well, but it doesn't feel as smooth or flowy as the Aurora to me, or as deep a black. It's interesting to see how similar they look in your scans though.

One test is worth a thousand expert opinions.

Wow thanks for the beautiful comparison. I'm just into the process of trying to decide what black ink fits a friend's brand new Neo Slim EF best and Aurora Black was the first attempt, however I fear my very old bottle might have dried up a little bit, giving me a blacker (if possible) and gunkier ink. Thanks to you, Take-Sumi goes straight into the list

This is excellent. Thank you for your efforts.

Interesting comparison, thank you. Your handwriting is beautiful, by the way!

Funny how when inks are so close, especially when comparing one can become even more confused

Great comparison. These inks look really good in your EF nib, more like dark greys. With broader nibs, I guess they’ll just be black. I like the iroshizuku ink a bit more, due to its soft shading that enhances the writing (not that your writing needs enhancement - love you cursive handwriting!)

I can't stop buying pens and it scares me.

What a beautiful review. Take Sumi goes on and off my list so many times. It almost went back on again this morning after seeing a beautiful Instagram post with it. It's similarity to Aurora Black in your EF (mine are mostly EF) has however made me put it on a "would be nice to but not essential" list.

Thanks for their review. I enjoy both these inks, and would be happy with either if forced to choose. Take Sumi I find especially lovely in a few vintage Pelikans and GeHas that have some flexibility in their nibs.

Both appear rather grey to me...


Fool me once, shame on you.
Fool me twice; damn
There goes that fox again.

Both appear rather grey to me...

That's what happens when you use a Japanese EF nib -- they are super fine.

brilliant comparison. thank you. there is a certain beauty in fine and dry nibs in that it brings out the lighter shades of darker inks which would otherwise turn out as black or blackish in wet nibs. as long as the base tint is dark enough, the written lines will be legible.

Also tagged with one or more of these keywords: aurora, black, take sumi, iroshizuku, comparison