In February of this year (2020), the folks at Fountain Pen Revolution released the latest pen in their range – the ‘Jaipur V2’.  The original Jaipur came out some 5 years ago now, with a fairly basic piston filler mechanism and a #5.5 nib – and with the funky smell that’s characteristic of pens made from vegetal resin!  The Jaipur is an update in almost every imaginable way – larger nib, upgraded piston fill mechanism, and manufactured from more ‘up-market’ materials (that smell a lot more 'neutral'...).

I reached out to Kevin the moment I saw a preview of this pen on his Instagram feed, and asked him to let me know when it was available for sale.  In early February, the day they launched on the PFR website, I placed an order for a Jaipur V2 in blue acrylic, with my favourite Ultra-flex nib – and a couple of weeks later it arrived, with an orange acrylic pen thrown in.  [Full disclosure, this latter pen was provided free because I’ve reviewed a few FPR pens before – it was a ‘tester’ pen, that couldn’t be resold because it had already been used.]

I have a much wider range of pens in my collection than I did when the original Jaipur came out – including some much higher-value pens.  I don’t tend to use my vegetal resin Jaipurs, Gurus etc unless I’m testing out an ink that I fear might stain my better pens, and I very rarely take them ‘on the road’ with me.  The Jaipur V2 is a very different story – these are attractive looking pens, with a much higher ‘fit and finish’, and have been pretty well constantly inked since I bought them.

The Jaipur V2 conforms to a fairly standard pen shape – more or less cylindrical along its length, though the cap diameter is about 1mm larger than the body, and there’s another step down in diameter where the barrel meets the blind cap that covers the piston mechanism.  [This incidentally is one of the places where the new design is an improvement on the old: the original Jaipur ends with a piston knob that could be actuated accidentally by a curious friend, forcing ink out of the nib; the piston knob on the new version is covered by a blind cap that matches the colour of the pen body.] 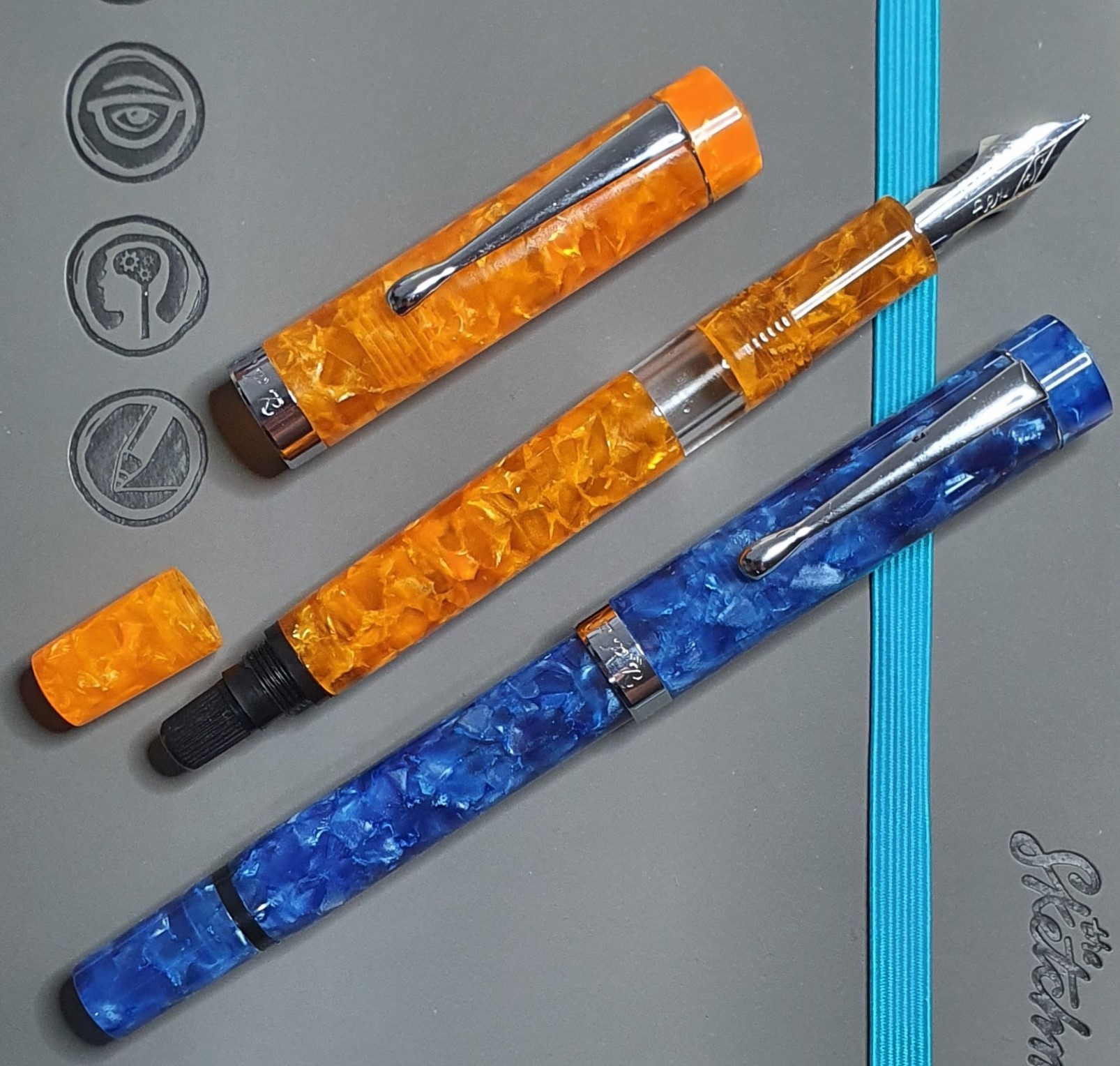 Removing the cap reveals two of my favourite features of the pen: the #6 nib, and a sizeable clear ‘window’ that allows the ink volume to be monitored.  I appreciate the fact that Kevin designed this pen to accept his proprietary #6 nib units, so that swapping nibs out is much easier than for the original (and for the Himalaya V2, which has given me major hassles in this department!]. 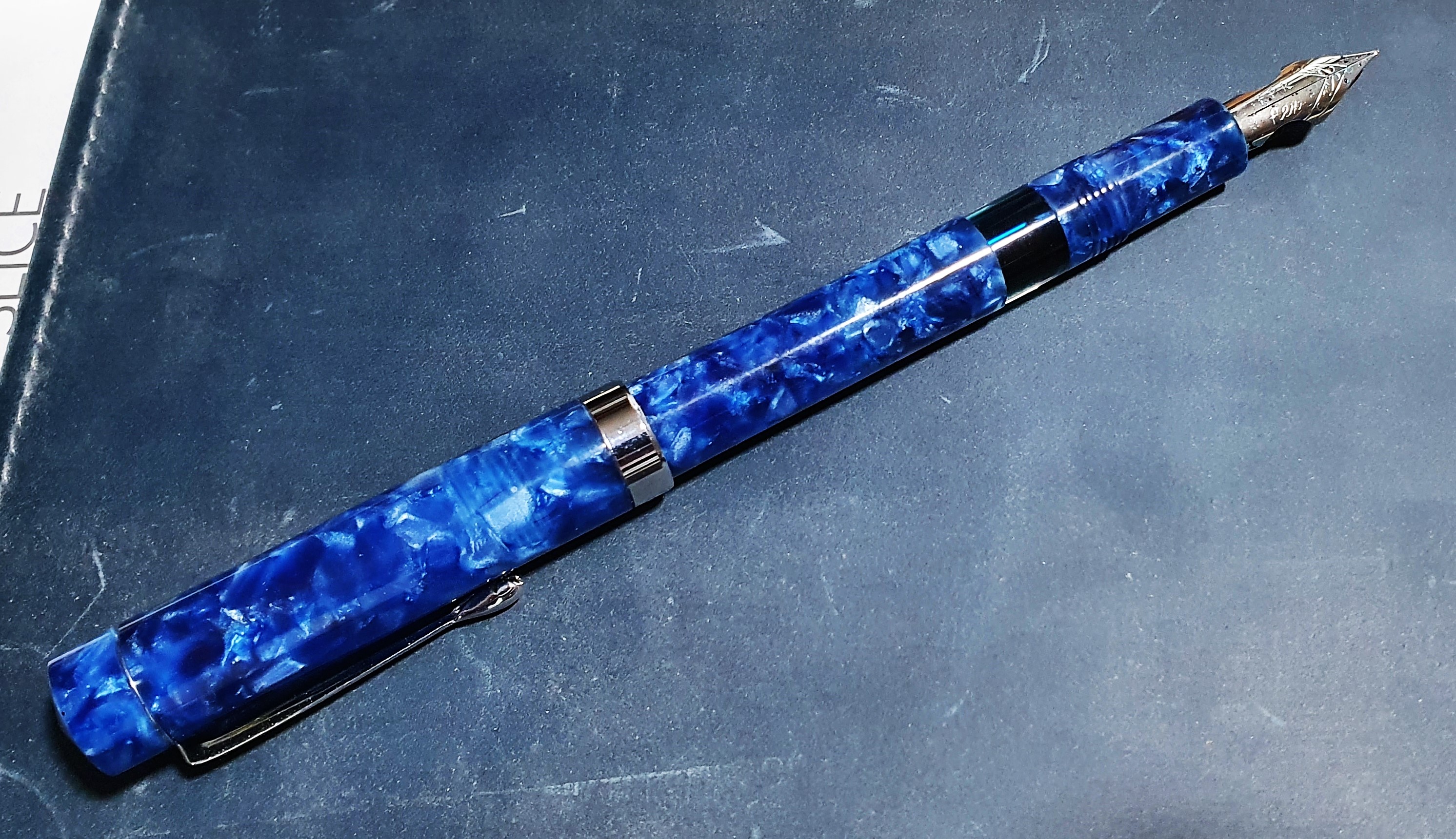 I really like the materials Kevin chose for the manufacture of these pens – the cracked-ice style acrylics are brightly coloured (blue and orange are the only options right now), with moderate translucency.  I’ve been very tempted to buy the mottled brown ebonite version so I have the whole set – but just can’t quite bring myself to buy a 3rd version of the same pen!  [I already own several Himalayas, and 4-5 original Jaipurs…]

The fit and finish on the Jaipur V2 is really good.  These are probably the highest quality pen in the FPR range – which I’d guess you would expect, given the higher cost of the pen.  The acrylic is highly polished, the parts fit together well, and I’ve had no trouble with ink drying out over time, which suggests the seal on the cap is airtight.  I only have one complaint, if you could even call it that: I find the piston mechanism fairly stiff, especially the first turn on emptying or filling the ink reservoir. 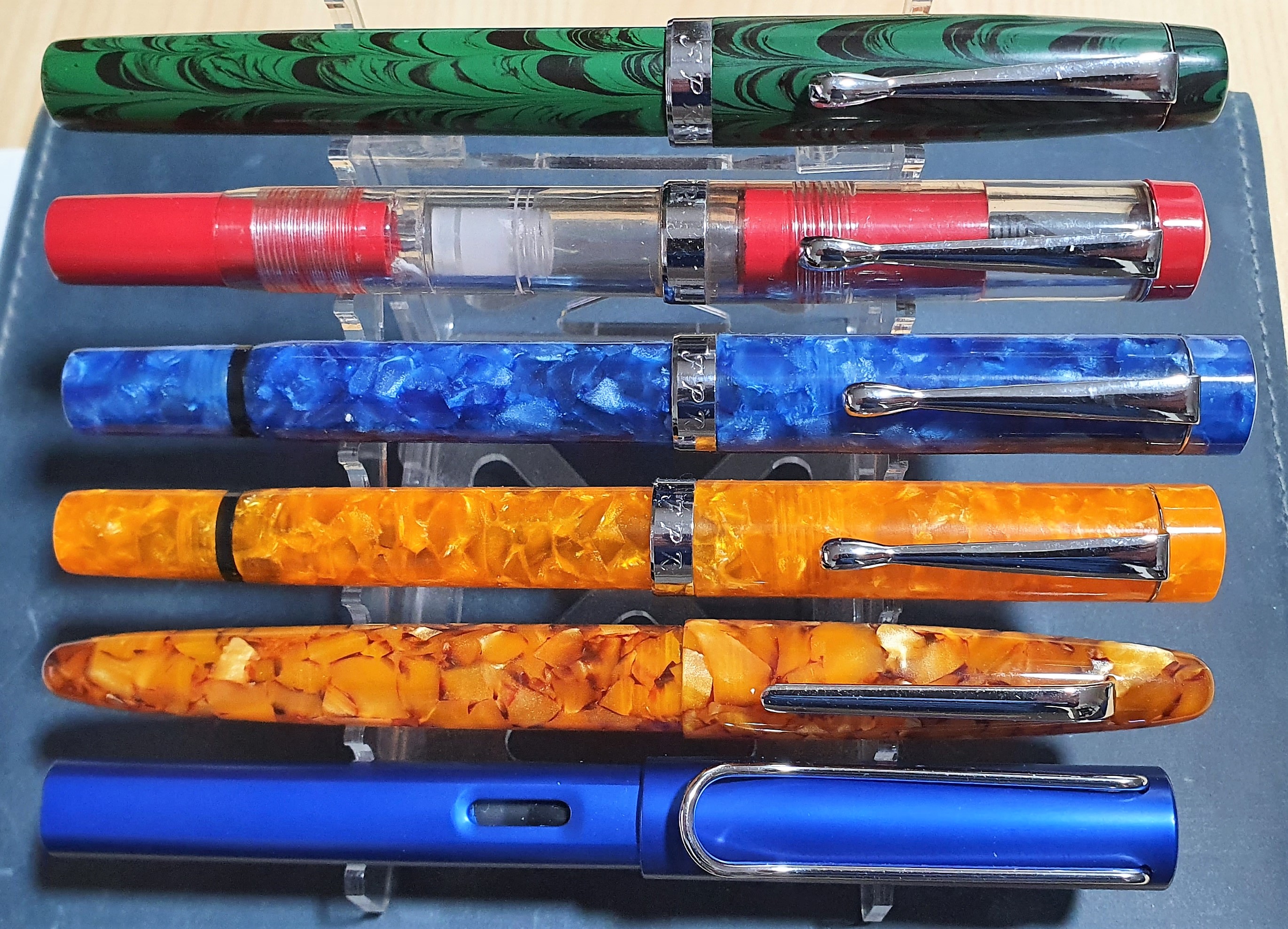 Placed side by side with the original Jaipur, you can see the ‘genetic’ relationship between the two in terms of design – but the V2 is a little larger on almost every dimension.  Capped the pen is 140mm long (compared to 135mm for the original); uncapped it’s 133cm long, while posted it’s over 170mm.  The latter looks a bit unwieldy – it’s not really designed for posting – but the cap sits on fairly securely.  The barrel of the pen is 13mm in diameter (the cap is 14mm), while the grip section sits at a very comfortable 10.5-11mm.  The whole pen weighs in at a very 16g – uncapped that drops to 10g, which makes the pen very lightweight, and ideal for long writing sessions. 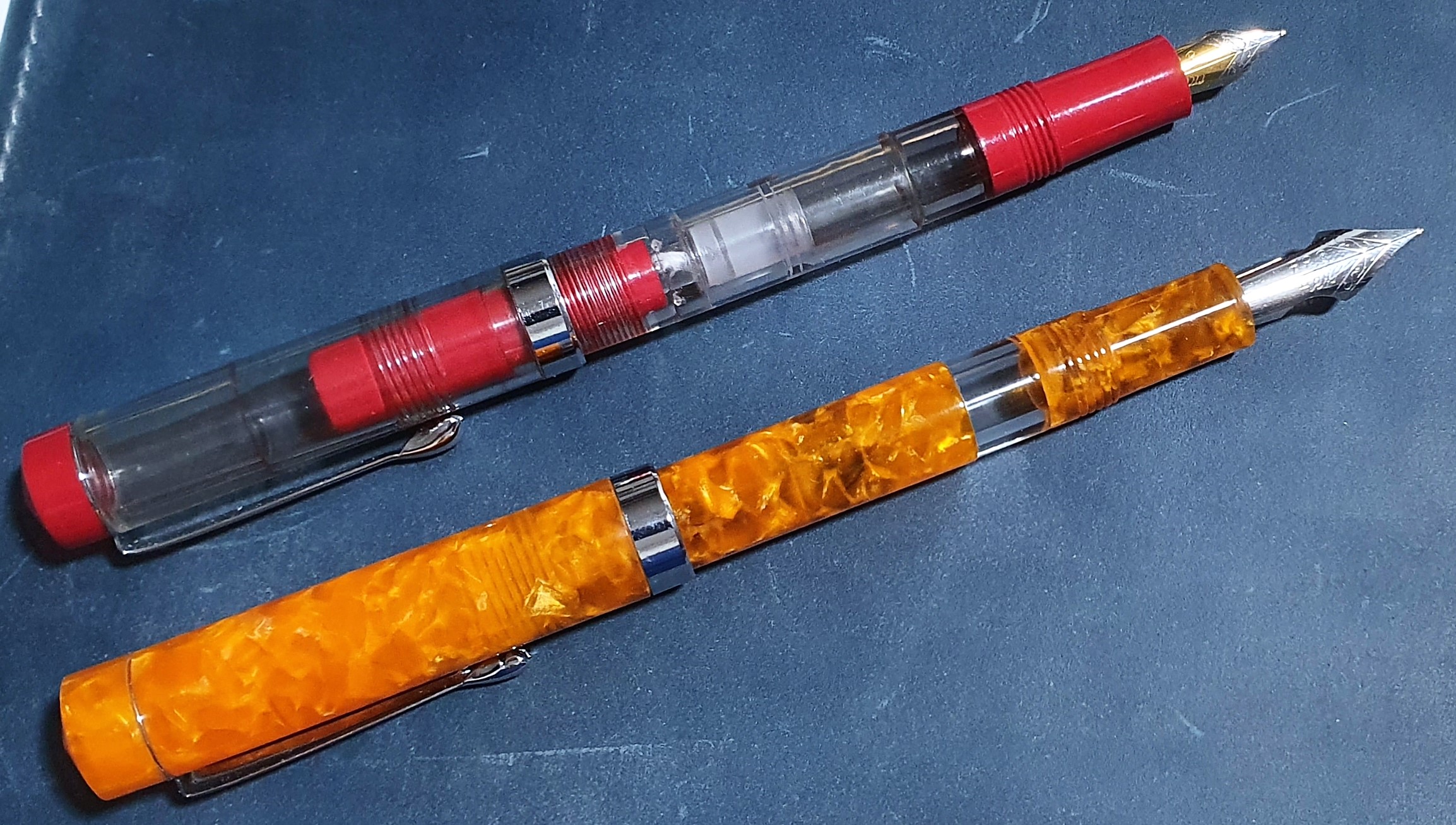 I willingly paid an extra $US14 to ‘upgrade’ to an EF ultra-flex nib – it’s far and away my favourite in the FPR line, though their other nibs perform well too.  This pen is designed to take the #6 screw-in nib units that were originally designed to fit FPR’s Triveni and Darjeeling pens – and the standard nibs (EF-B and 1.0mm stub) are paired with a plastic feed.  The ultra-flex nib, though, comes with an ebonite feed (with a very wide and deep ink channel to maximise flow). 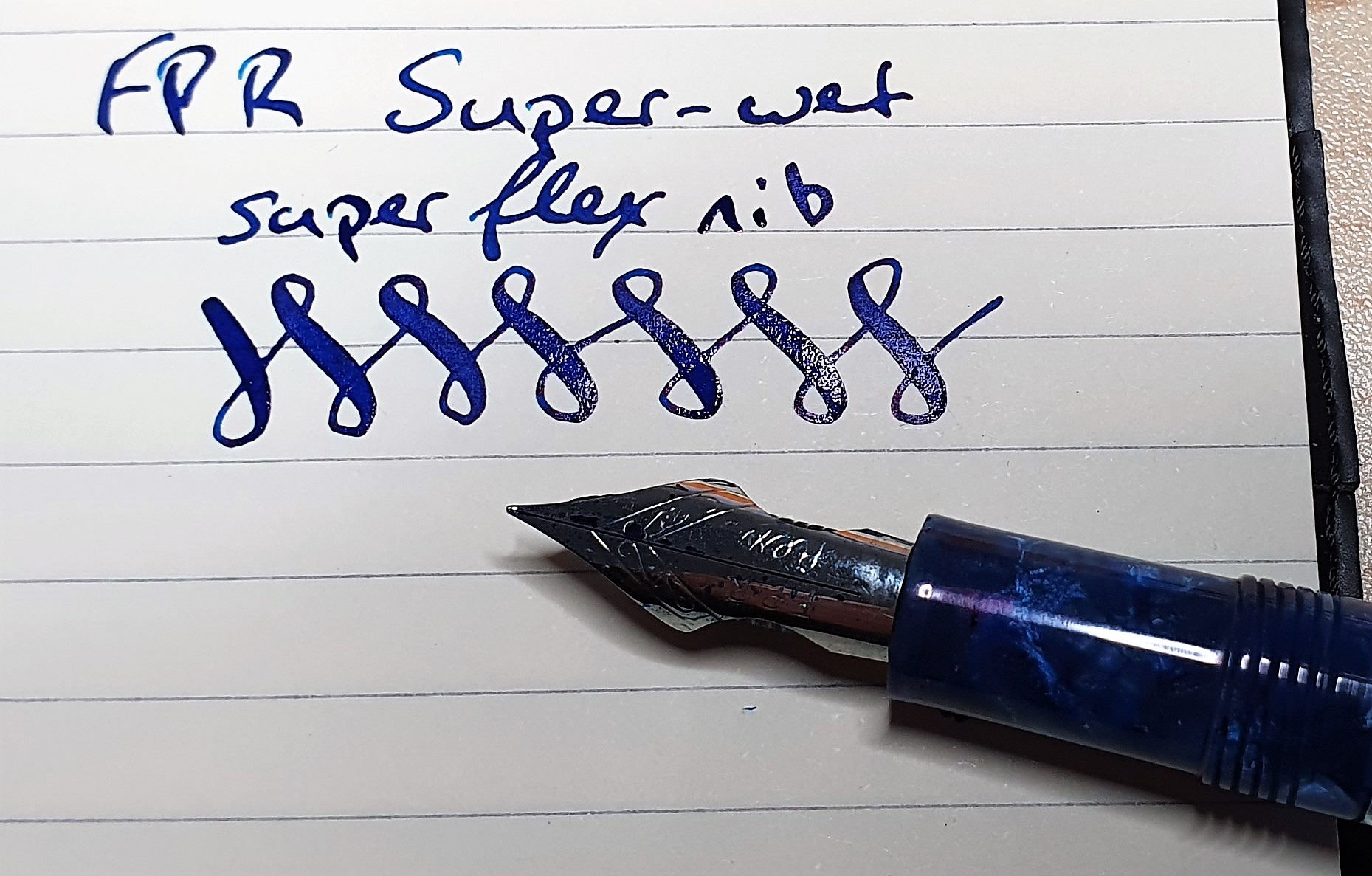 Since writing my review on the Himalaya V2 (FPR’s second-most recent pen release), I’ve found a few reviews complaining that with the ultra-flex nib they were prone to railroading and ink starvation – I found the same problem with one of mine, that required some effort to fix (some judicious deepening of the ink channel).  I’ve had no such issues with the Jaipur V2 – it’s an exceptionally wet writer (with the ultra-flex nib installed), that allows me to flex with freedom.  For everyday writing, I’d recommend purchasing one of the ‘regular’ nib units – these ‘tame’ the pen nicely, producing a more moderate ink flow.  [Of course, you can always order the pen with the ultraflex nib installed, and purchase a spare ‘regular’ nib unit in the size of your choice, to swap in as you wish!] 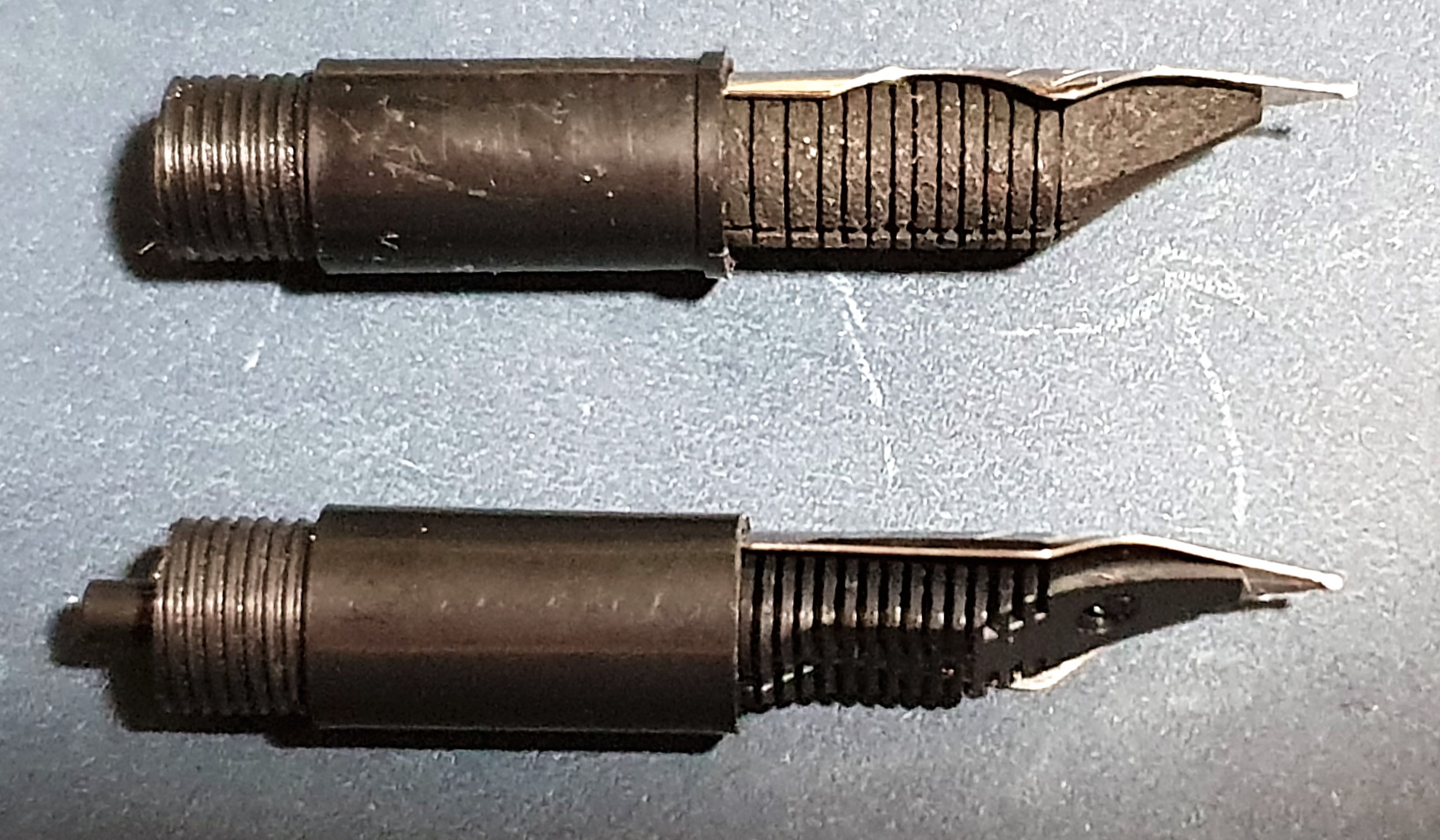 As I mentioned earlier, the filling system is (apart from the nib assembly) the biggest ‘upgrade’ for the V2 of the Jaipur.  Whereas the older version relied on the same kind of clutchless piston with nylon seal that’s found in the Guru, the Indus, and the Dilli, the piston in this pen is much more robust, and relies on more durable washers (which I think would also be easier to replace?) for maintaining a good seal.  Also, whereas for these earlier model pens the entire rear of the pen functioned as a piston knob, for the Jaipur V2 the piston knob is concealed under a screw-on blind cap – making it much less likely the piston will be turned accidentally between fills. The maximum capacity of the ink reservoir is around 1.2mm. 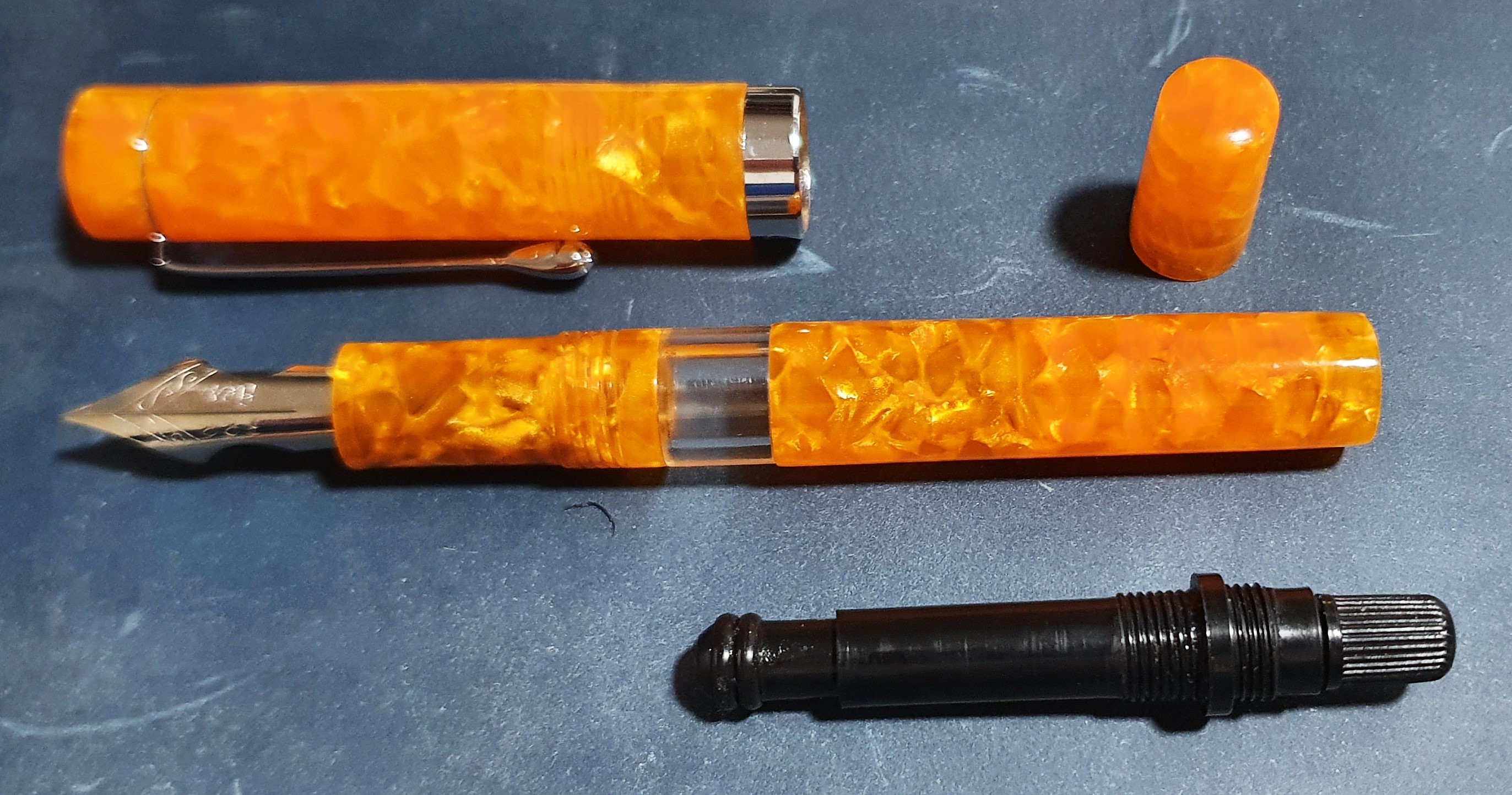 The pen can be completely disassembled for cleaning, and easily reassembled – my only complaint with the pen (if you could call it that!) is that the washers on the piston fit very snugly against the inside walls of the pen.  This makes the piston mechanism very reliable… but also a bit stiff.  Maybe it’ll loosen up a little with time?

At US$55 (plus postage) for ‘regular’ nib sizes (B, stub and flex nibs cost $4 extra, and the ultraflex nib will set you back an additional $14), the Jaipur V2 is FPR’s most expensive pen – but it’s well worth it for the upgraded design and materials. 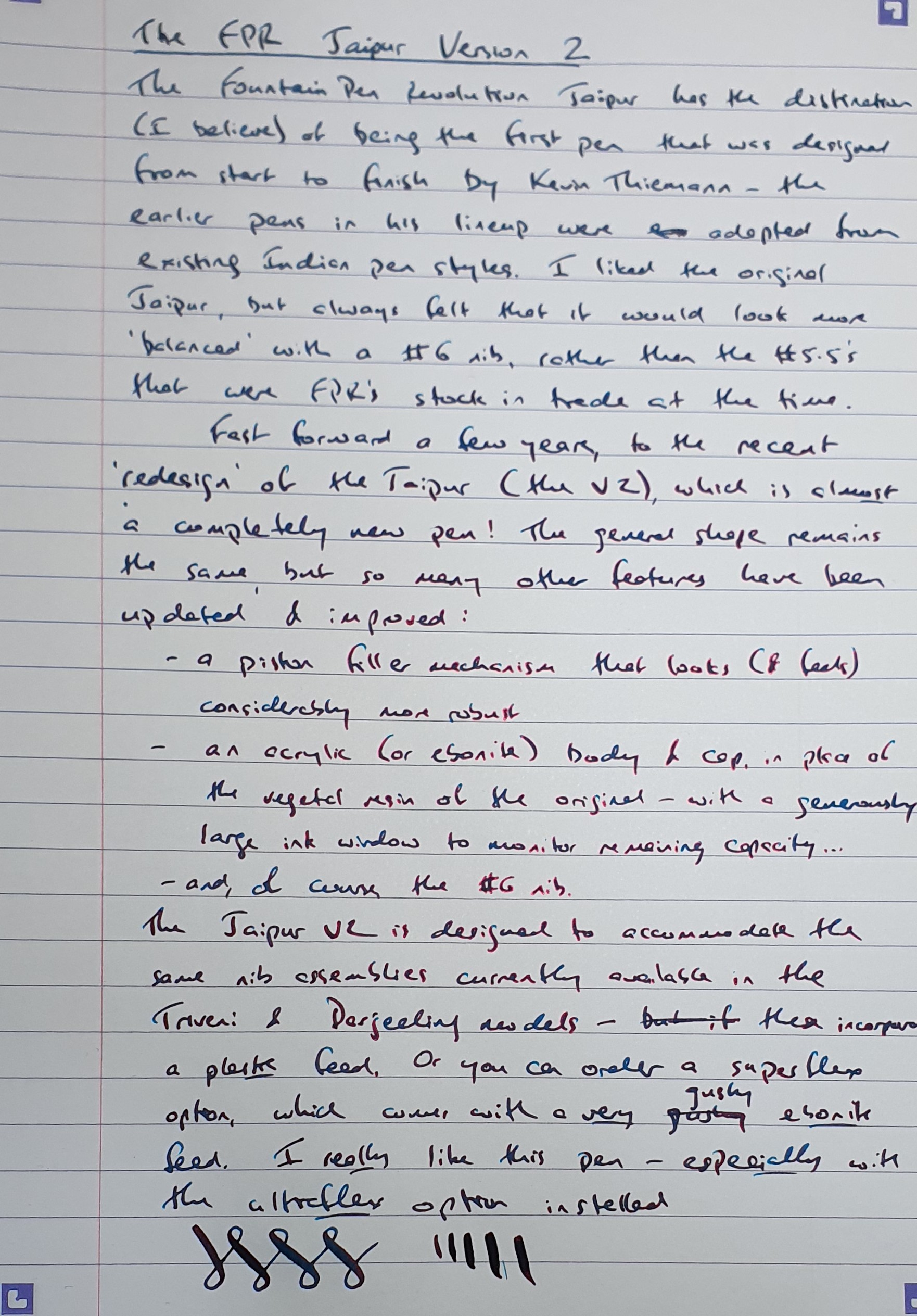 Until my V2 Jaipurs arrived in the mail, I’d have said the Himalayas (V1 or V2) were my favourite line of pens from FPR.  The Jaipur has changed that up, though: these pens are very attractive, they feel great in the hand, and they write like a dream.  I’d happily recommend this as a mid-range pen, that competes very well with other fountain pens in this price range.  And Kevin’s / FPR’s customer service has, in my experience, always been exceptional.

If it comes in non-acrylics too, I'm guessing it uses the same "new" vegetal resin that noodlers introduced on the triple tail, which doesn't smell at all.

If it comes in non-acrylics too, I'm guessing it uses the same "new" vegetal resin that noodlers introduced on the triple tail, which doesn't smell at all.

FPR work with a number of different manufacturers in India - which accounts (at least in part) for the variance in price and quality between their different product lines.  This is certainly a step up, even from the Himalaya (which is a lovely pen, but not quite as well finished).

At the moment it's only available in two the two cracked-ice style acrylics (orange and blue), plus a brown swirled ebonite - though they may broaden the range in time?  Not sure what kind of plastic or resin the ink window is made from, but it also seems a higher grade.

A quick check last night showed that the Jaipur V2 is temporarily out of stock - perfect timing for me to finally upload my review!I!

You’ve convinced me! (And I like my FPR Himalaya V2 in green ebonite very much as well.)

Now I just need to wait for the Jaipur V2 to be back in stock...

You’ve convinced me! (And I like my FPR Himalaya V2 in green ebonite very much as well.)

Now I just need to wait for the Jaipur V2 to be back in stock...

I don't think you'll be disappointed - don't get me wrong, I really like the Himalaya V2, but I think this just steps things up another notch.