I am very happy with the qualities of my De Atramentis Document Black, which I keep loaded for writing checks and addressing envelopes and the like. It only has one flaw, which is that it is black, the world's most boring color of ink (medium blue being right behind it).

What are some permanent inks which are well-behaved, safe to keep in a pen for a month, and are interesting colors?

I should add that the pen is a modern Pelikan piston filler with an ink window I would prefer unstained.

I have used many Noodler's, Rohrer & Klingner Salix and Scabiosa, Koh-i-Noor dokument ink, MB permanent blue and blue-black, ESSR blue-black and probably many more without issues.

When I had them, it was the ink drying and that was more the pen's fault than the ink (in that it would happen with any ink, and not in tightly capping pens).

So using up a pen-full of, say, R&K Scabiosa in a month wouldn't be a problem, despite all the disclaimers about staining ink windows etc?

I don't own any Pelikan, so I cannot guarantee that the plastic in the ink window will not react. It shouldn't, and it hasn't my piston fillers, but I have no experience with Pelikan pens. 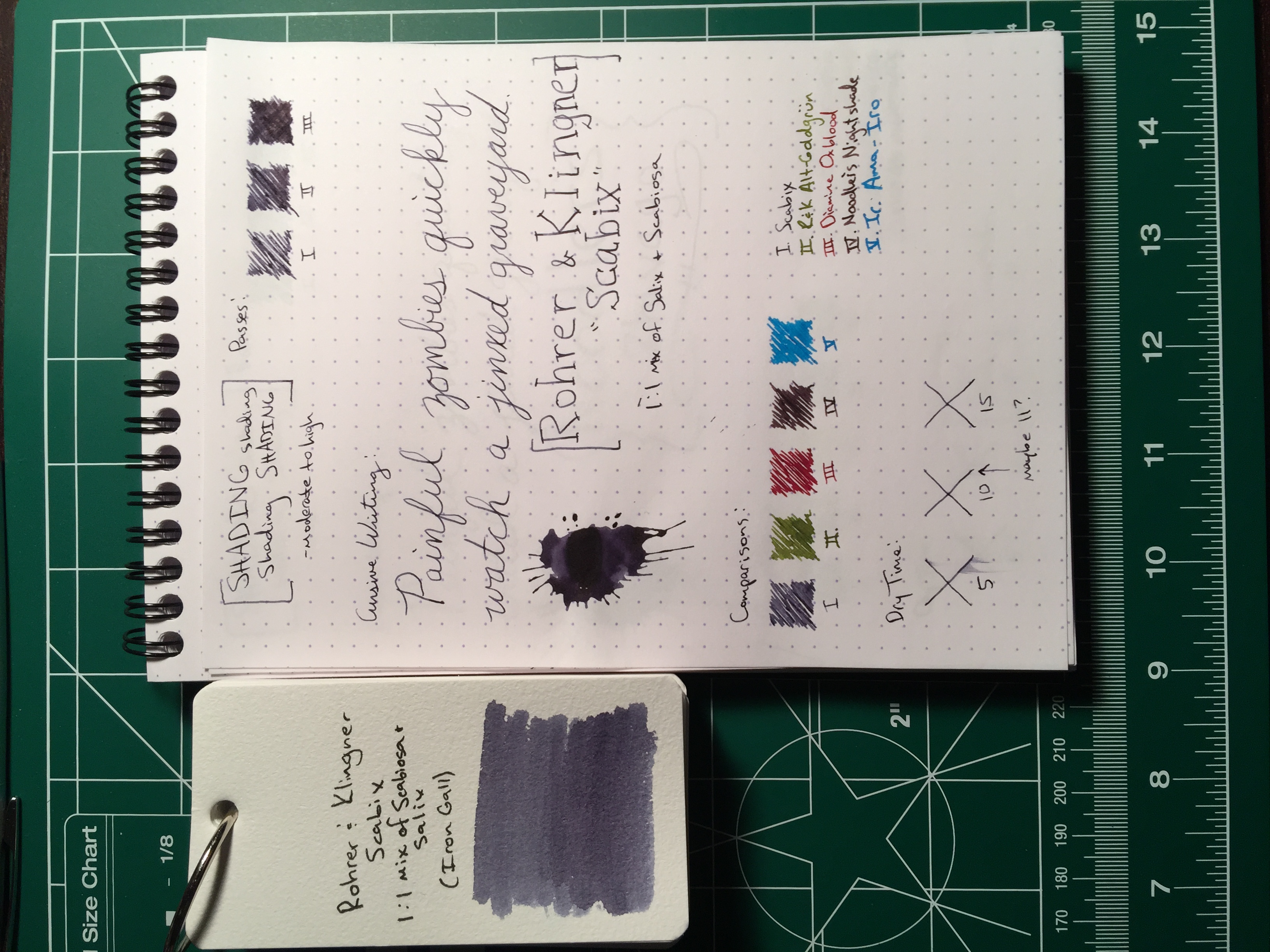 Scabix, a 1:1 mix of Salix and Scabiosa, doesn't look that bad to me.

How about any of the other De Atramentis Document inks such as Blue, Dark Blue, Fog Grey or Document Brown; Sailor Seiboku or Souboku, or Platinum Pigmented Sepia or Pigmented Blue.  Also I think the Graf von Faber-Castell inks like Midnight Blue, Hazelnut, Cobalt Blue, or Stone Grey, to name a few, are also supposed to be archival.

Inks I generally use for signing checks and addressing envelopes:

Noodler's Heart of Darkness (yeah, I know, black... but well behaved and dries faster than the regular Noodler's Black).

Noodler's Kung Te Cheng -- NOT a well behaved ink, but a great color and pretty much *everything proof*.

Noodler's 54th Massachusetts -- I like it, but YMMV (there's a thread currently about someone having it turn to gel in their pen).

Sailor Souboku -- Less teal than Seiboku (which I haven't tried), but as a pigmented ink it needs a little more maintenance.

Most iron gall inks (but again, a bit higher maintenance because you have to flush them out more often and you want to use a dilute vinegar solution instead of (or at least before) a dilute ammonia solution, flushing before and after (and in between if you then do the ammonia solution) with distilled water.  I have Salix in a pen at the moment, but I also like a lot of the KWZ iron gall inks, particularly IG Blue-Black, IG Blue #3, IG Gummiberry and IG Violet #3 (although your bank may frown on the last two as not being blue or black); and I like Akkerman Ijzer-Galnoten as well.

I've tried some of the De Atramentis Document inks, but I'm not keen on the behavior -- the ones I've used have had a tendency to spread.

R&K also makes some "archival" inks -- their Documentus line.  Dunkelblau is a little chalky looking but I like Hellblau.  Haven't tried any of the others so I can't say what they're like.

DeAtramentis Doc. Red. It's a little on the light side for me, but I believe there is nothing better than a fine black ink.

I ordered some samples of colors that appeal to me -- R&K Scabiosa, DeAtramentis Document Brown, and a few others, and will experiment! I totally loved the Rohrer and Klingner Super 5 inks especially the Dehli ink which is this wonderful waterproof orange/yellow.