This is the first of what will hopefully be a series of posts that start looking at the similarities between nibs of various brands, especially lesser known, lower end manufacturers. The idea is to see if we can figure out relationships between factories beyond the Jowo, Schmidt, and Bock arrangements we know of. I don’t have any authoritative knowledge, just a collection that spans the lower end of the market and attempts to collect pens from different countries. I hope others will join in and add to the posts to create a more complete picture of the relationships between different companies now and in the past. It is not an attempt to make sense of IPG (Iridium Point Germany), Parker 51 clones, or Lamy Safari/All star clones. Sorting those nibs requires direct knowledge from someone working in the industry or someone with metallurgic testing skills. I will focus on the nibs, but will try and look at overall pens when I think the designs share a lot of traits or are interchangeable.

The first pens featured are the Herlitz Tornado SLS ( 1988?), the Tombow Object (2008?), the Jolly Jollypen, and the Staedtler Learner’s Pen. The companies all currently produce fountain pens, although the Tornado and Object are not current models. Herlitz and Staedtler are German, Tombow is Japanese, and Jolly is Austrian. All but the Object are German student pens. The nibs and pens share characteristics that I hope to show you that the nibs are from the same company or made from the same tooling. The feeds differ between the current production pens and the older ones, so someone has updated the design a bit.

The first photo shows the pens together and you have from top to bottom; the Herlitz Tornado SLS, the Tombow Object, the Jolly Jollypen, and the Staedtler Learner’s Pen. The Tornado and Jollypen follow the typical adolescent German Student Pen design of a metal cap, sturdy clip and plastic body, The Tornado is more of an adult pen with an anodized, brushed aluminum, torpedo design. The Staedtler reflects the current elementary-aged Student Pen aesthetic of “rugged kid proof plastic bludgeon” 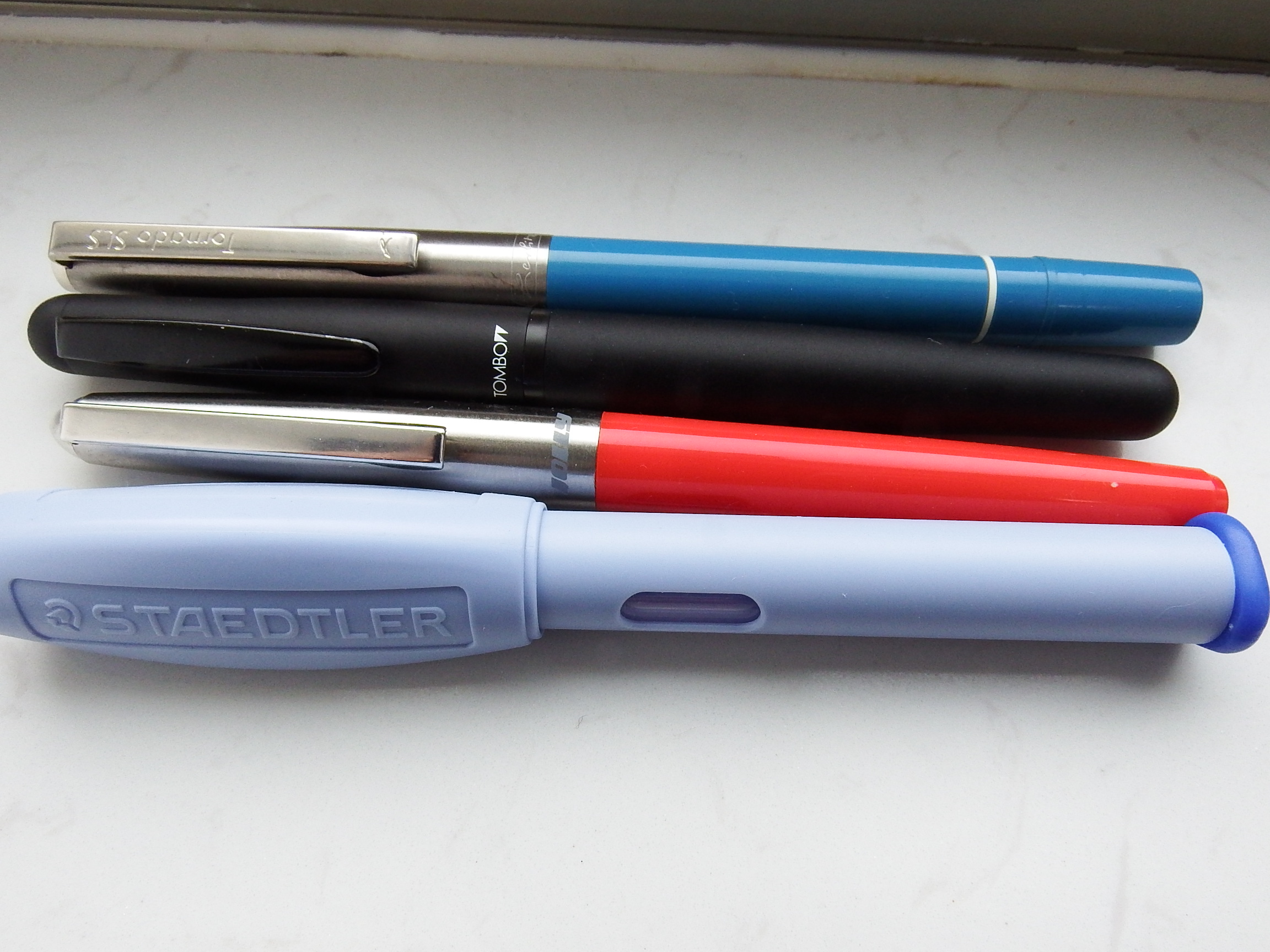 The nibs are shown below and all have a continuous curved design with no breather hole. They are well-behaved, lay down a smooth line and shade inks relatively easily. They are all forgiving nibs as one expects from student pens and ink leaks are rare. When ink leaks, a few drops is what you get. 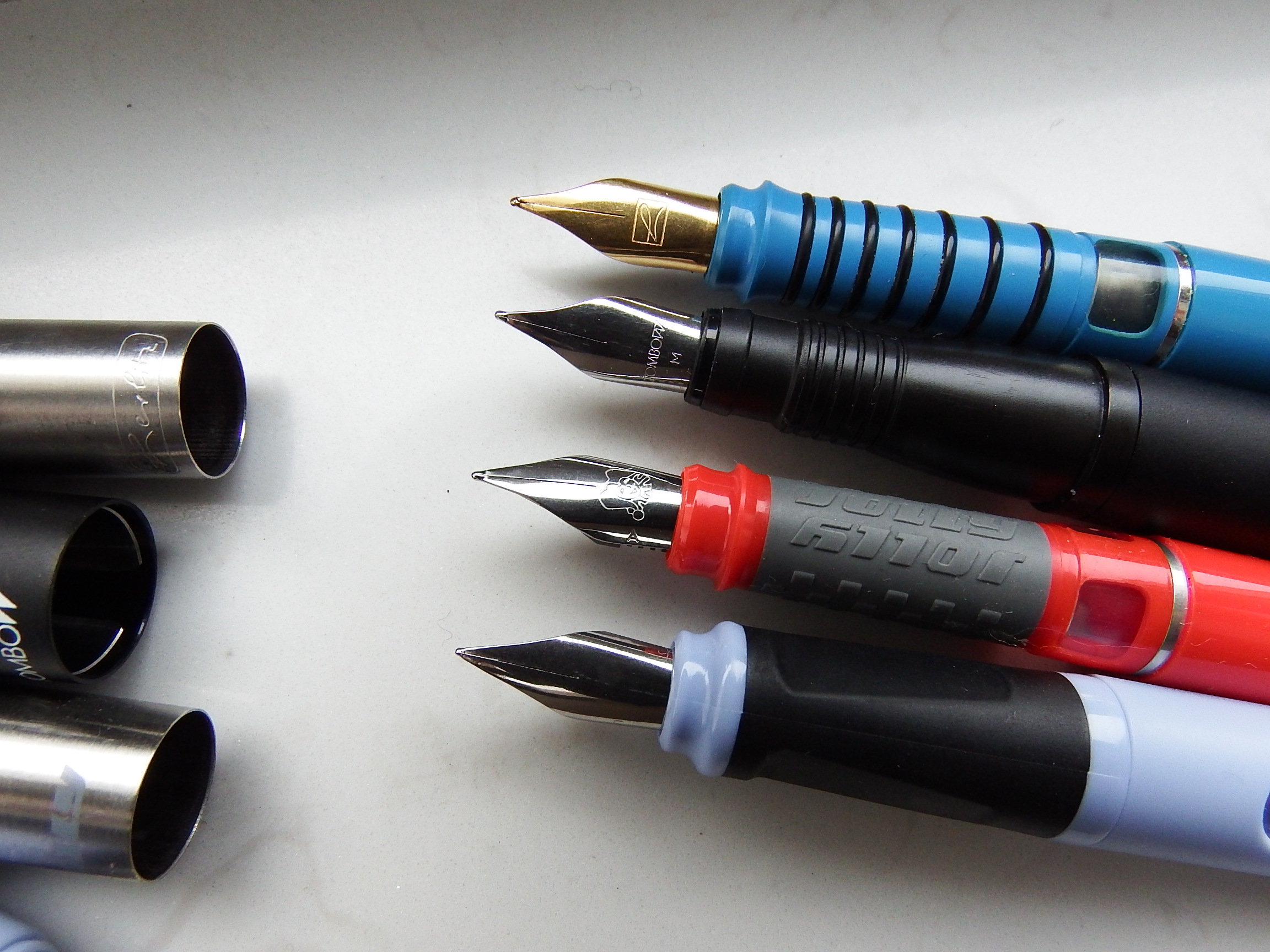 The Tornado and Object share the same design for nib and feed with little visible differences beyond the color of the nib and sprue burrs. 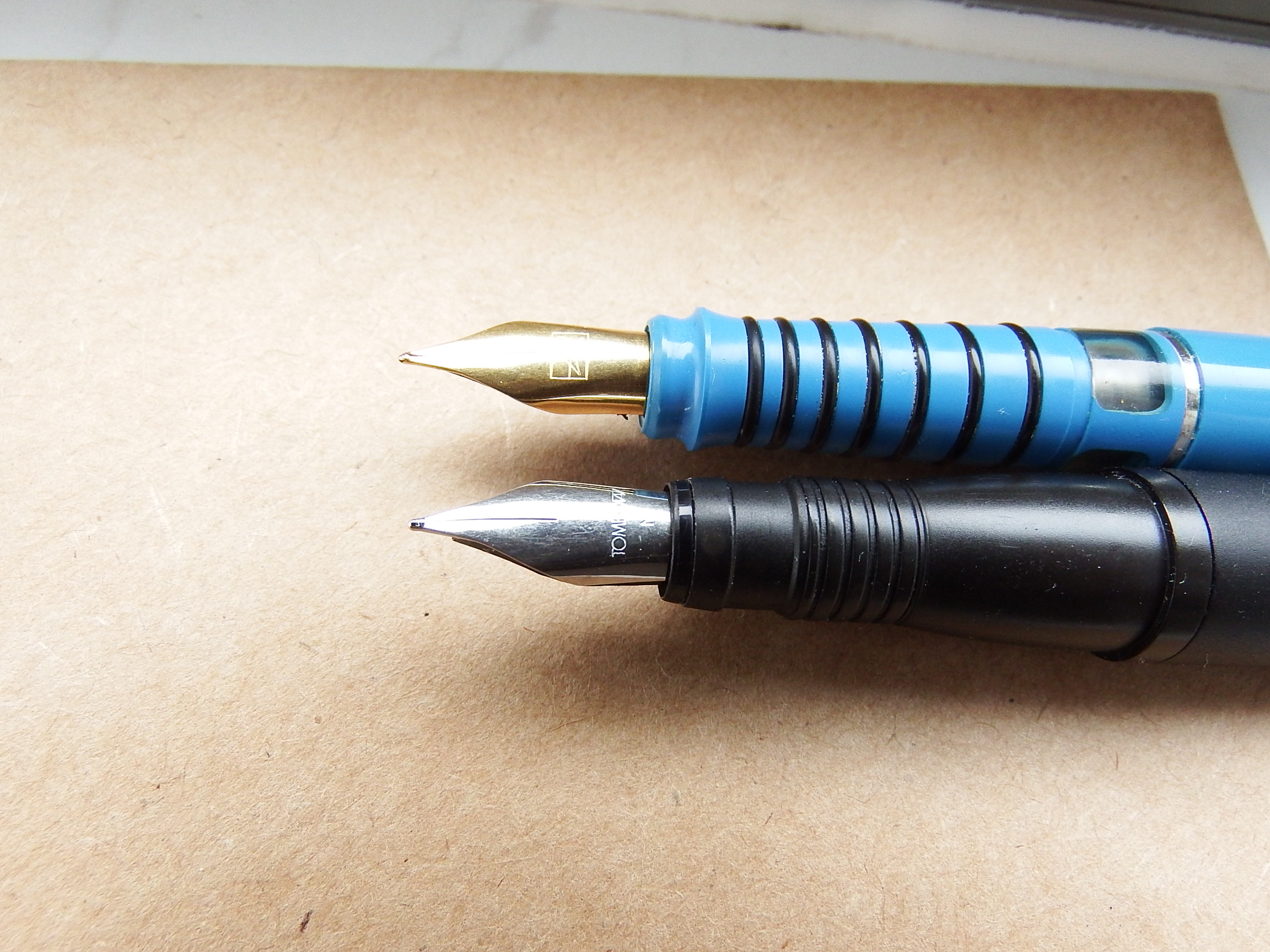 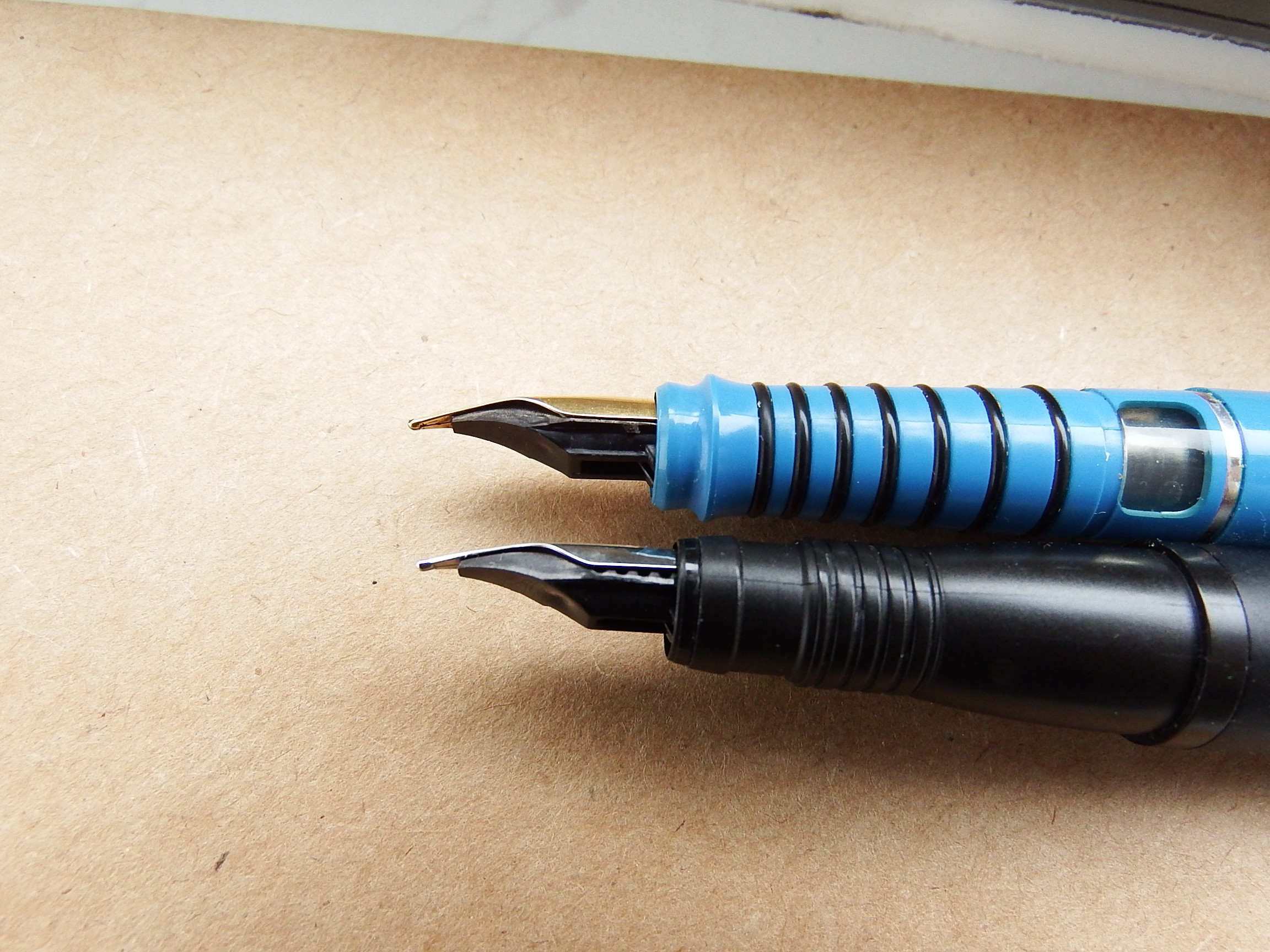 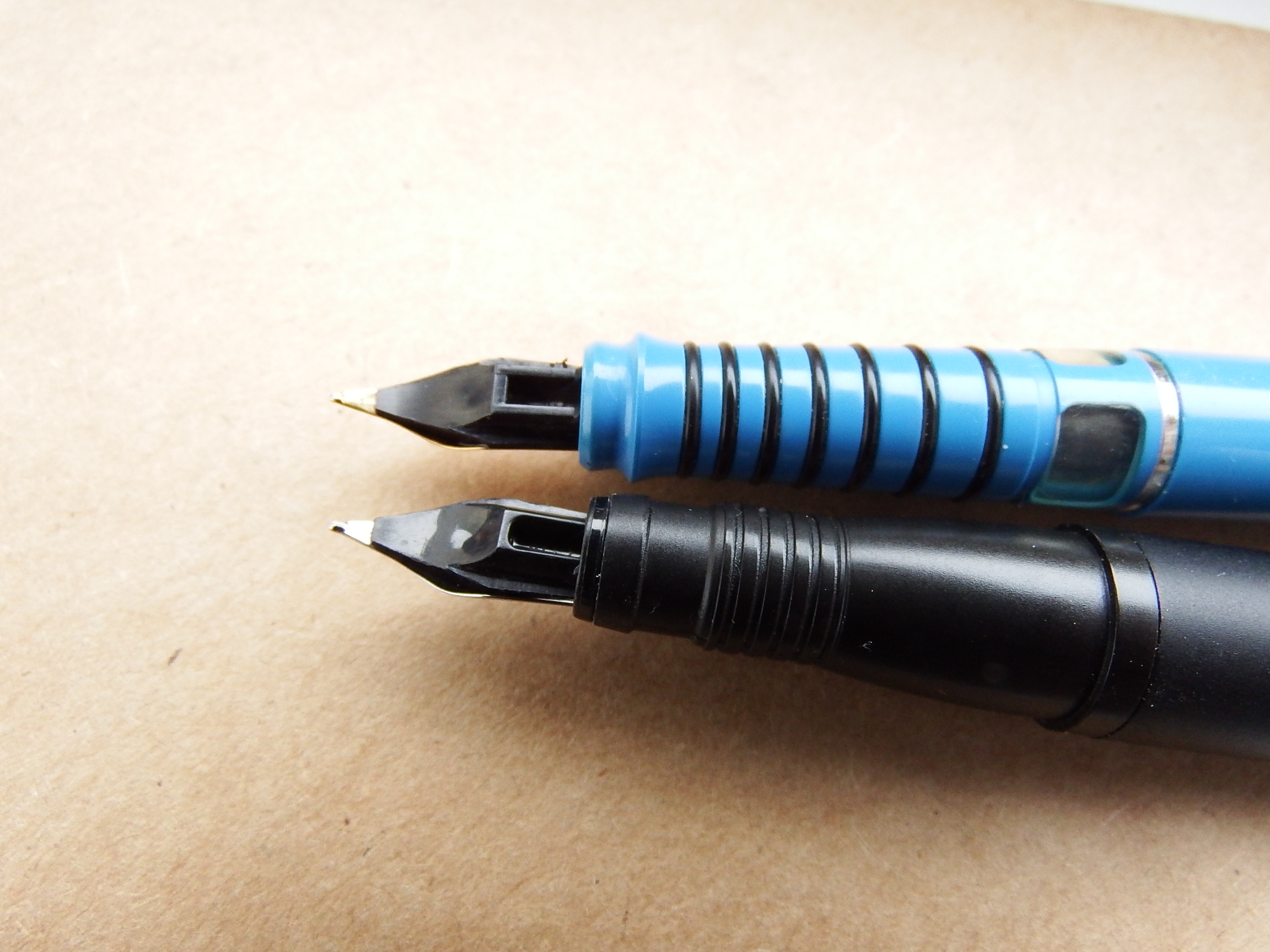 As far as I can tell, this nib started use in the Herlitz Bugatti which dates from the 1960’s (?). Hopefully someone who has a Bugatti can chime in?

The Jollypen and Learner’s pen share the same nib and feed. The nibs differ just in engraving, while the feeds are identical. The nibs are shown below. 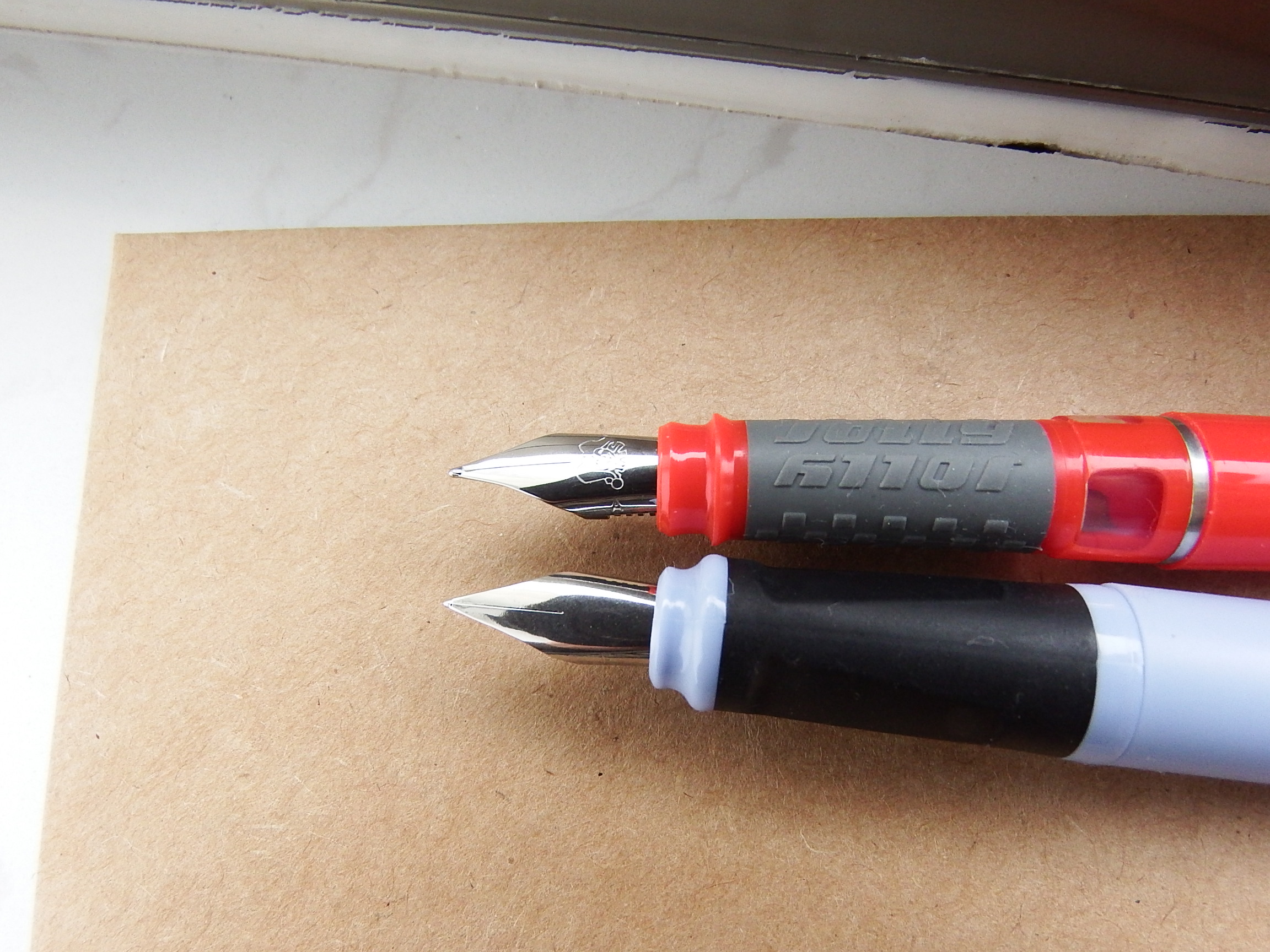 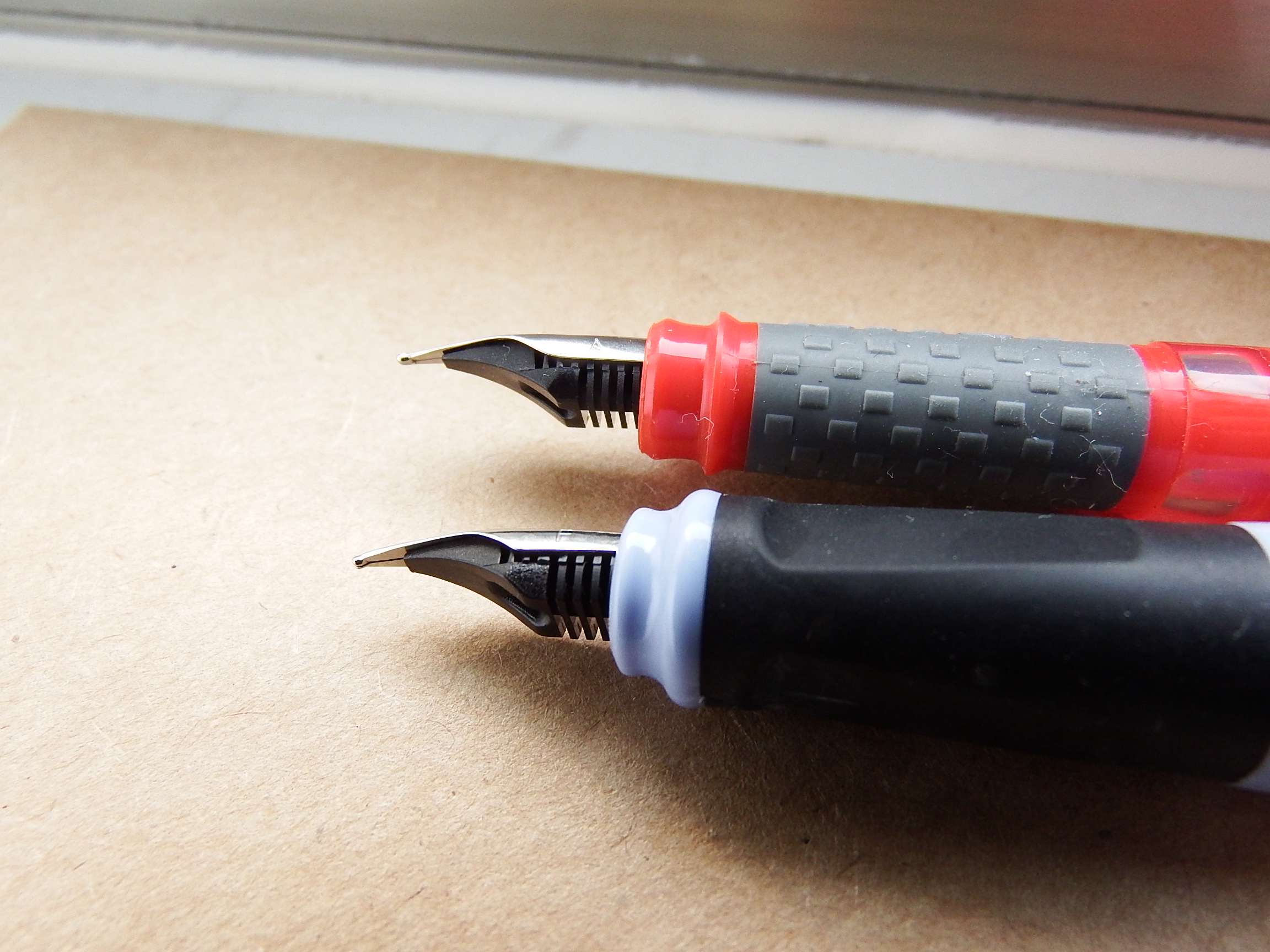 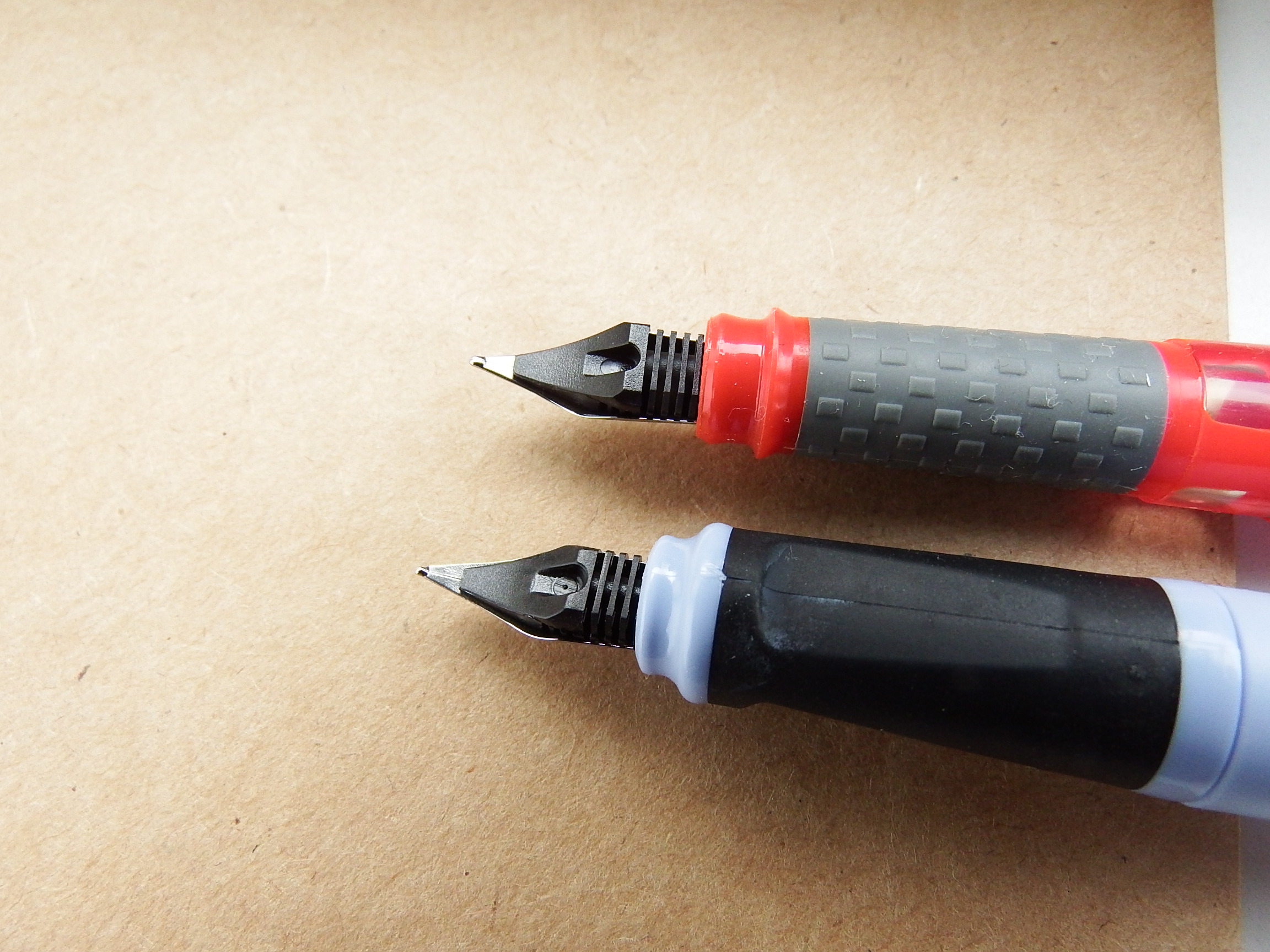 Based on the history with the Bugatti, I think that Herlitz first made the nibs and tooling and either makes the nibs for Jolly and Staedtler or provides the tooling. I haven’t seen this nib in any form from Jowo, Schmidt, or Bock, however that doesn’t rule out that one of these companies makes the nibs shown in this post. Hopefully someone who knows more can shed more light. Tombow is interesting as it will appear in my next post as a company that shares a nib with a pre-Sanford Rotring pen. Because Tombow’s nibs match those used by other companies, I doubt they make this nib in house.

Jolly is a newer company than Herlitz, so I don’t think it makes the nibs. The similarities between the Jollypen and Tornado are striking as they seem to share the same tooling for the barrels and caps, or are similar enough to be interchangeable. 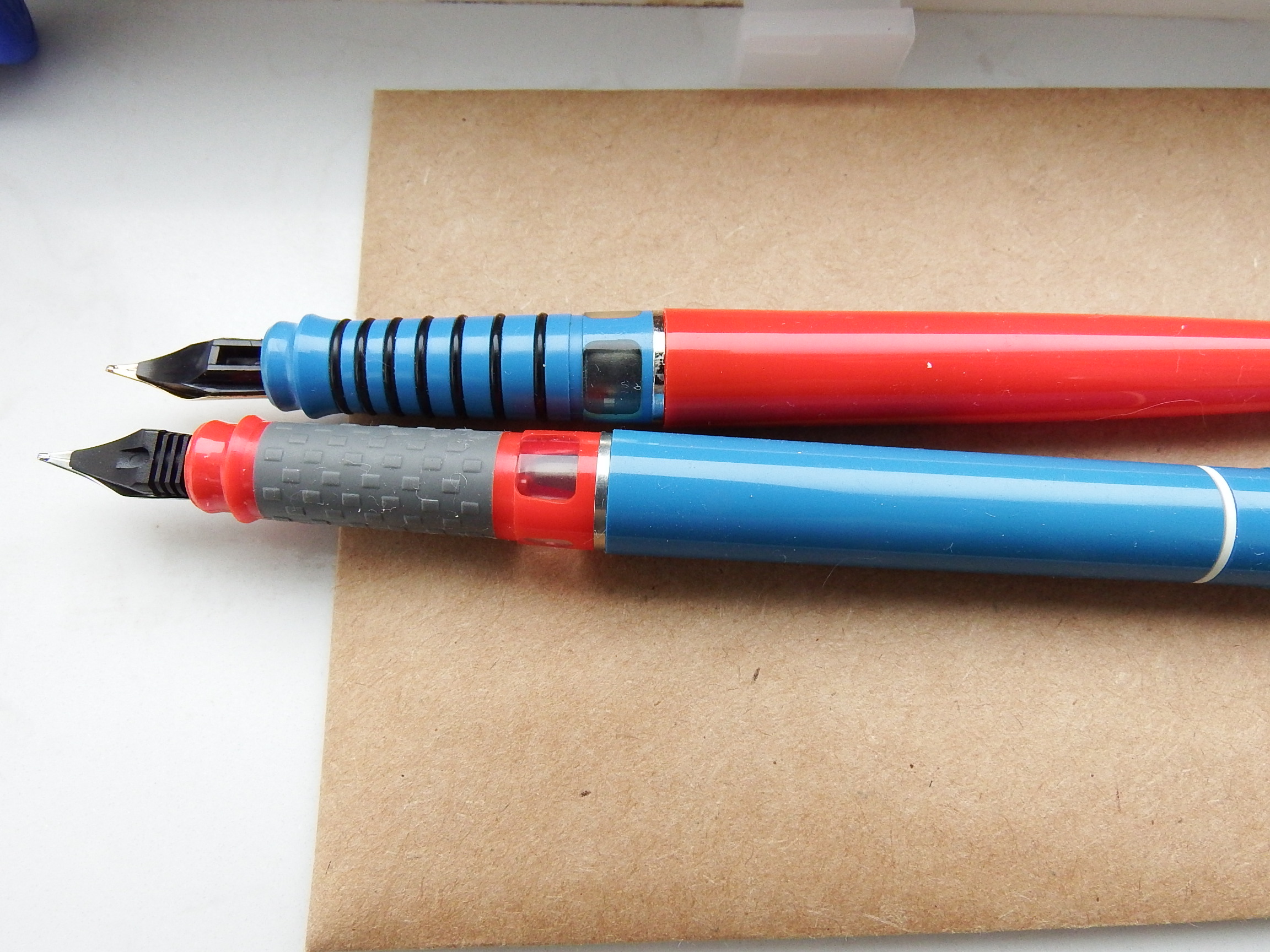 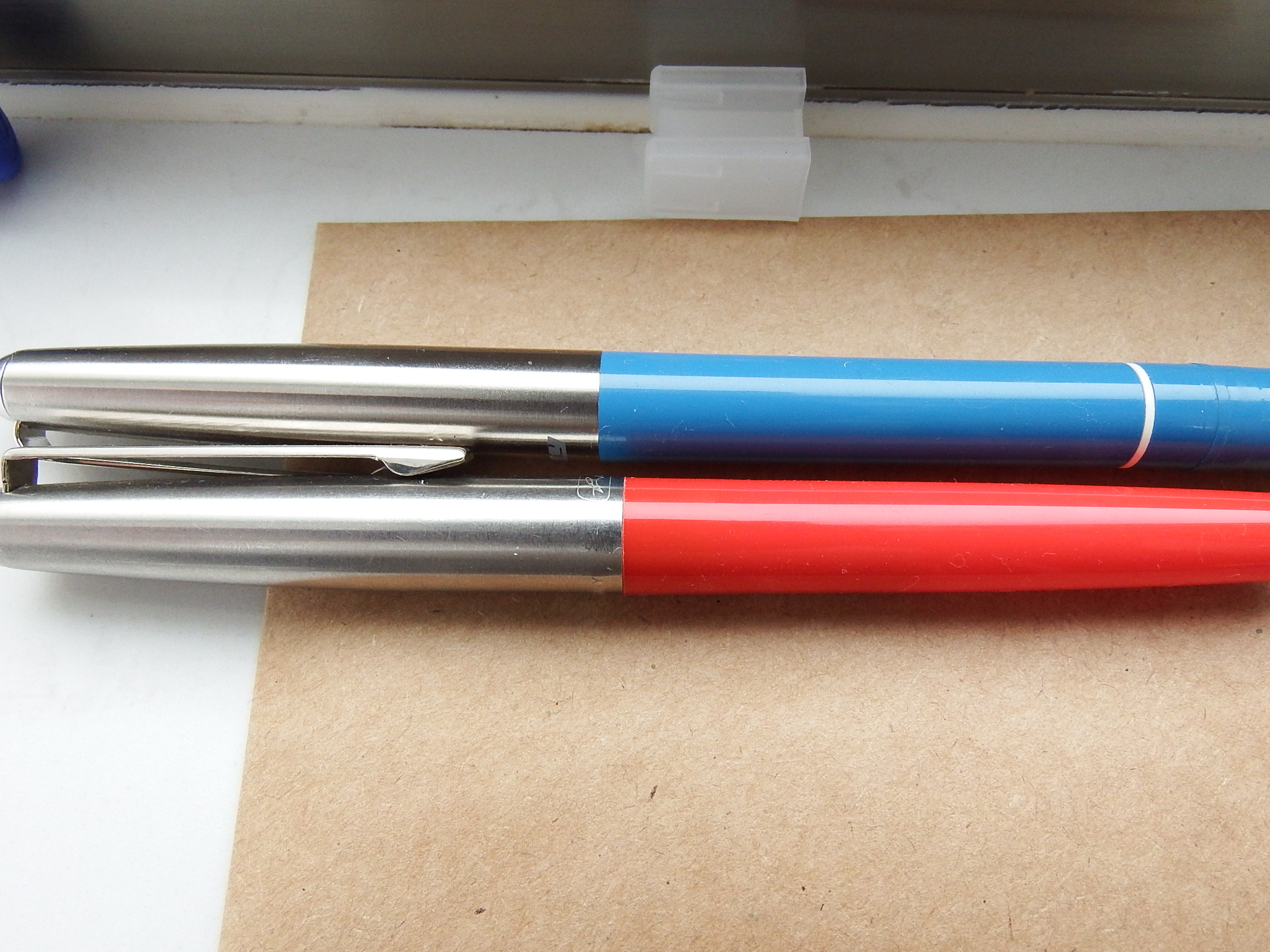 The Tornado is an SLS version that was made with an ink eraser at the end. The eraser didn’t work as well as the traditional two-ended ones like the Pelikan Pirat. 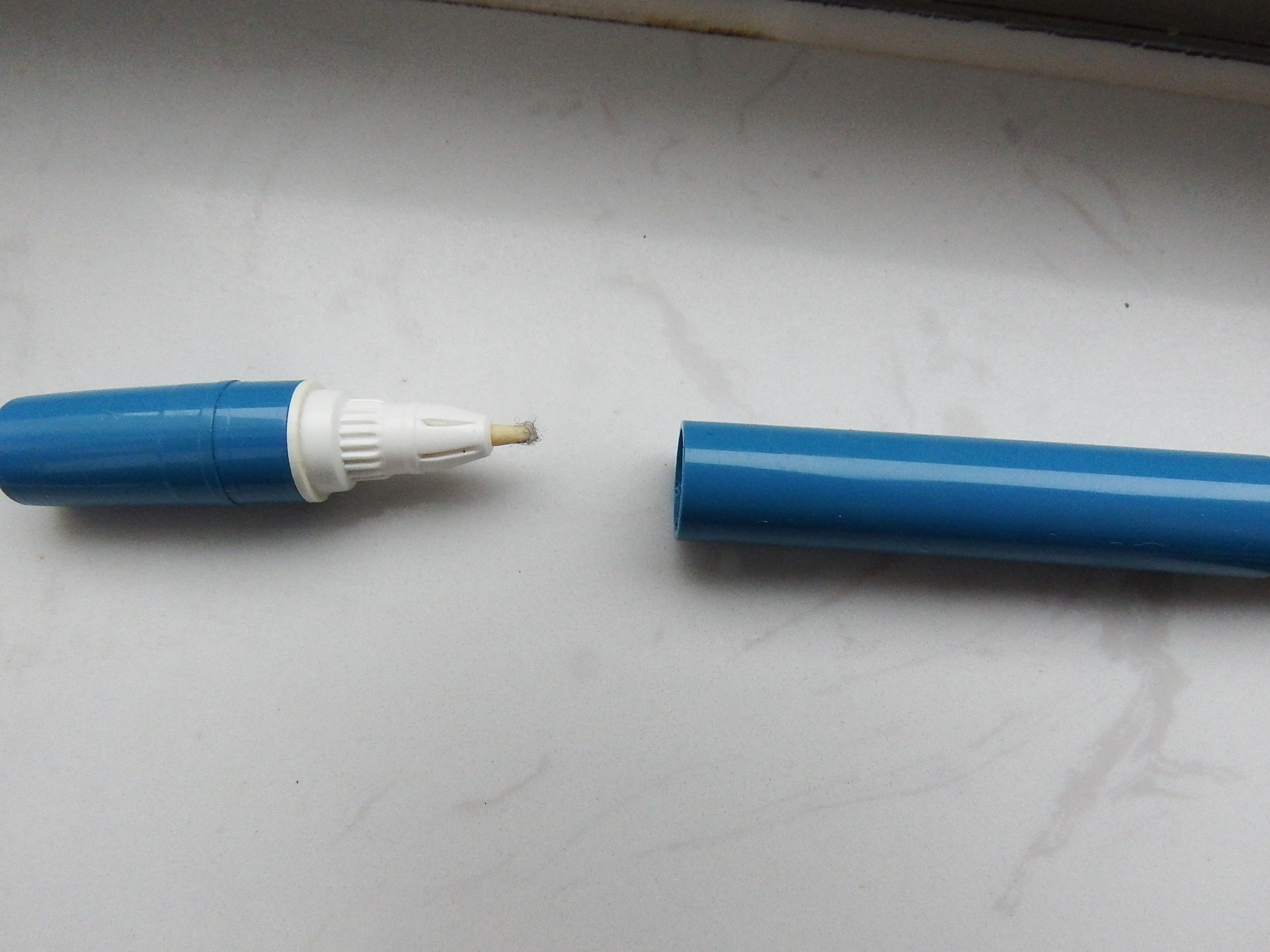 I hope you enjoyed this post and please add your knowledge and look through your pens and see if anything looks like these pens.

Postscript: Jolly is a lesser known company, whose pens are great if you want nice student pens off the beaten track. I have another earlier production Jollypen as well. Here is a link to their site.

I am in China and it is not always easy to see the site. Are the pictures appearing in a reasonable size for readers outside of China?

The photos are much larger than I am used to seeing.

I guess it is too late for me to edit. Apologies for the size of the pictures.