The Difference An Ink Can Make

Not that this would be anything new to you all, but since I'm still new to fountain pens & Inks I'm just now getting to experience this first hand.  What a difference the type of ink you use, even within the same brand, can make with the performance of a pen.  I made my first bigger step up in pen and acquired a Platinum 3776 in a fine nib with the gold leaf dragon on.  I was excited as this was my first gold nib pen.  A soon as it came in I inked it with Noodler's Tolstoy.  As I made my first few pen strokes my happiness started to turn to disappointment.  I did not like the way it wrote, dry, sratchy & skipping like mad.  Maybe it was me getting used to a new pen so I gave it a couple days.  I still had the same bad experience and started thinking I just dropped a chunk of money on a horrible pen.  Then I remembered people talking about finding the right pen/ink combo, so let me try a different ink.  I flushed the Tolstoy ink out and refilled with Noodlers Legal Blue.  The change in performance was like night and day.  Inked with legal blue it wrote like a dream.  The nib glided across the page with just the right amount of feedback and no skipping whatsoever.  I couldn't be any more happy.  The 3776 has now become the favorite in my small collection & I'm using it just about every day.  Being inexperienced you would assume that ink is ink, it should all work the same and put down a line.  It really is amazing how much the type of ink can change your writing experience.  Like I said, I'm sure this is nothing new or surprising to the rest of you.  I just wanted to share my quick story.

That’s one of the both frustrating and enjoyable things about fountain pens, experiencing problems and learning some things on your own. As a self-identified newbie, you might want to look at the link below, A Newbie’s Guide to Ink (it links to Part III, which in turn links you to Parts I&II). The websiteIndypendance (used to be Richard Binder’s website)has some excellent information under the Reference Pages heading as regarding pens, how they work, inks, etc., if you need further information about FPs .
http://www.fountainp...nks-part-i-i-i/
https://www.indy-pen...ence-pages.html

For sure! In fact if I order a new ink I have to know it works well in each of my EDC pens equally. I shrunk my ink collection drastically over the last year making a point to only keep 5 bottles. One of those was Montblanc Midnight Blue. I wanted to keep it so I could use a Montblanc ink in my Montblanc pen, but no matter what pen I used it in I always was unimpressed. It's an inexpressive, flat ink that comes out too dry.

So off to the chopping block it goes and today I just received my new bottle of Jaques Herbin Bleu de Minuit. Works well in all my EDC pens (according to the sample I had) which is what matters.Turns a "hammer and chisel" writing experience into some "butter on hot glass" action.

Incidentally I've got some boring barely used Montblanc ink up for sale in Toronto. Just sayin'...

Here is a demonstration of flow and color variation of the same ink in different pens from a reddit user. 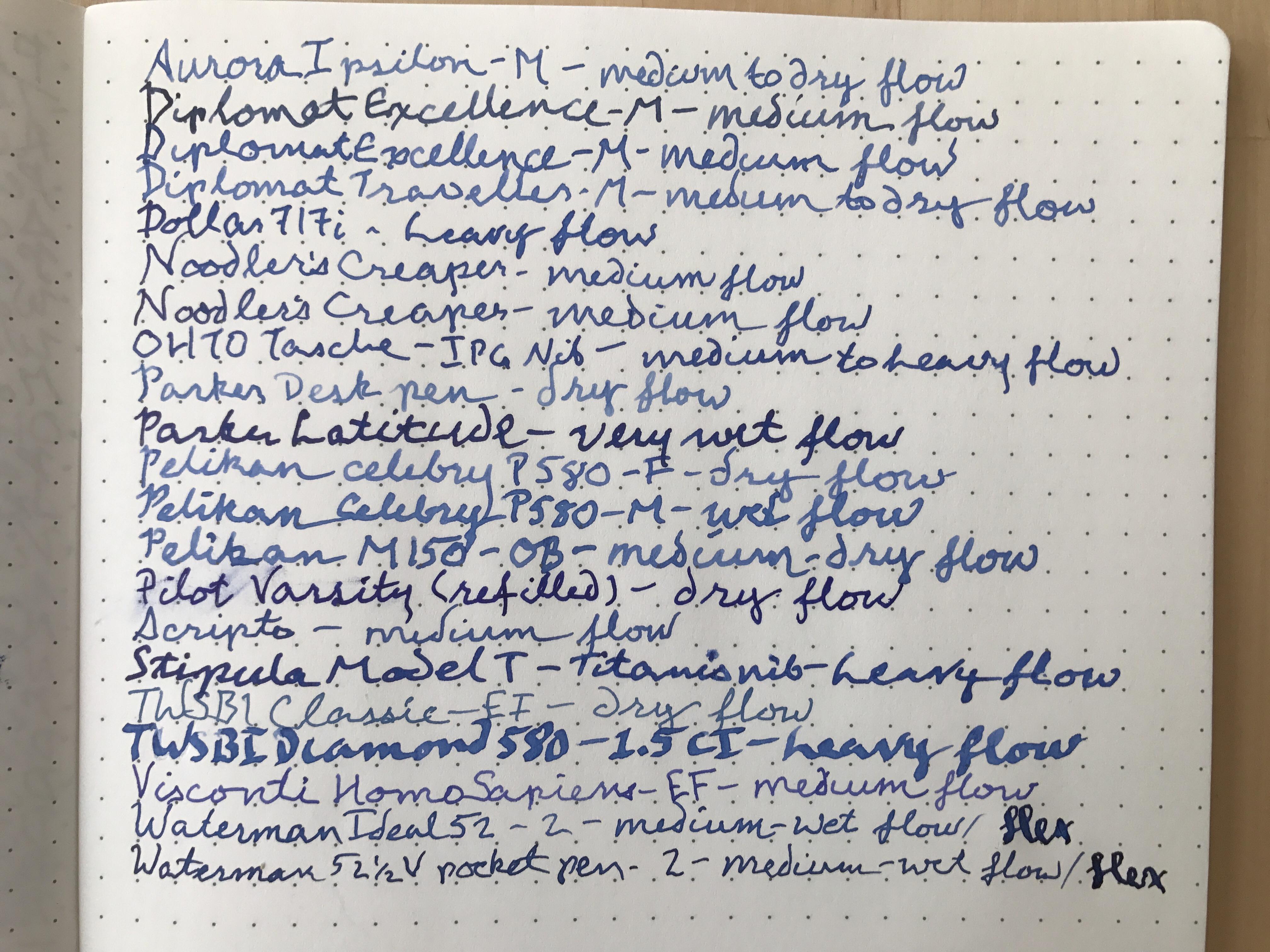 sorry if the pic is too big. Here is a demonstration of flow and color variation of the same ink in different pens from a reddit user.

sorry if the pic is too big.

That's great -- do you have a link to the original post where this image was shared?  Always good to link sources / credit.  Very useful demonstration.  This is exactly why I am always careful to pair pens with inks strategically, to get a particular look I prefer.

My story:  I bought a 1948 Aurora 88, fine semi+ flex nib on EBay.  To be safe, I filled it with Aurora Blue,  thinking surely, I will get the best performance from the manufacture's company ink.  The pen started hard, skipped, and railroaded, and I though I hard purchased a lemon.  I then emptied the pen and filled it with Monteverde Sapphire ink.  BLAM!  It writes like a dream.  No half starts.  No skipping.  No railroading.  Just a beautiful expressive writer.  I may have told this story in another entry.  "Repeat story, grandpa."

@ MadAsAHatter -- Even the same brand of ink doesn't necessarily work well in a specific pen.  I have a Sheaffer Snorkel with an EF nib.  Thought a great ink for it would be vintage Skrip Peacock, since they're roughly from the same era....  Nope -- not so much.  Horrible flow.  Modern Skrip Purple, OTOH, worked very well in that pen.  Go figure.  But the Snorkel with the semi-flex stub nib?  That pen LOVES Skrip Peacock (good thing I found a 3/4 full pint bottle in an antiques mall a few years ago...

My first Pelikan was a 1990s era M400 Brown Tortoise that I got on eBay for a special occasion.  Very juicy wet F nib on it that, while not precisely flexy, has some spring to it.  Thought it would be a good pen for doing drawing with.  Thought a great ink would be the exceedingly beautiful Iroshizuku Yama-Guri.  Again, not so much -- that's a very wet ink and in a wet pen it was just *too* wet.  But Noodler's Walnut, which I had given up on as being too dry to be useable?  A great combination with that M400 (Edelstein Smoky Quartz is good too).

Even supposedly identical pens, with identical width nibs, may not write the same: one of my Noodler's Konrads writes much drier than the others, for instance.  Keeping track of what pen/ink combinations work well is a good idea -- and is also another excuse to use the pen(s)....

Switching inks is one of the first things I suggest to new users when a pen misbehaves.  Not merely every brand of ink, but every different ink in each brand, and sometimes different batches of a single ink, has a different performance profile.

Waypoints on the Inky Journey (aka the Six Essential Inks)

And do not forget the paper aspect.  If you are writing on cheap, garbage paper, you can certainly expect a mediocre performance by your pen and ink.  A better paper will showcase the performance of both ink and pen.

And do not forget the paper aspect.  If you are writing on cheap, garbage paper, you can certainly expect a mediocre performance by your pen and ink.  A better paper will showcase the performance of both ink and pen.

Considering I do most of my writing on garbage paper, it's ability to write on that paper (copy paper) is absolutely important.

If I have to spend $30 on something to take notes, that doesn't make economic sense.  Paying $5 more on a bottle of ink that writes well on a $1.75 sugarcane paper notebook makes much more sense.  I have some pens and ink that don't do well together with that paper, I have others that do REALLY nicely.

If you want something cost-efficient that behaves well even on nasty pulp paper, go for Pilot Blue-Black.  Sandy1's review is definitive.

eta:  well, it was, until Photobucket broke all the photo links.

Waypoints on the Inky Journey (aka the Six Essential Inks)

If you want something cost-efficient that behaves well even on nasty pulp paper, go for Pilot Blue-Black.  Sandy1's review is definitive.

eta:  well, it was, until Photobucket broke all the photo links.

Heh.  Oh, I've been doing okay.   I have a couple of inks I won't use on certain things, but I'm working my way through pens to determine the best 'all in one' for my particular needs.  Which includes "Banging around in my pocket or bag with pocket knives and other miscellaneous crud"   So therefore, that leaves out the 70+ year old Snorkel