I am having a peculiar flow problem with my 1946 standard sized Parker Vacumatic.  I picked this pen up several years ago on Ebay and got it fairly inexpensively because diaphragm needed replacing and the nib tines were slightly bent and looked as if someone had tried to straighten them.  I started to work on the pen myself and then decided I did not even know what it was that I did not know about repairing a Vac and should, therefore, not make the attempt.

I sent the pen off to a reputable repair facility and got back a beautifully restored and functioning Vacumatic with its beautifully straightened, fine point nib.  The pen wrote wonderfully for about 3 months and then, one evening as I was making notes for the next day's activities, the left tine of the nib suddenly snapped off right above the tipping material.  Obviously the bend and then straightening was too much for the gold tine.  No doubt my lame, ignorant early efforts did not help things along in that department either.  Saddened by this event, I put the pen away for almost a year until I happened upon a new, old stock 1946 Parker stub nib measuring right at .040" or about 1mm.  I sent the pen off again with this nib and the same person set the nib for me.  At that point, when the pen returned, I was never happy with its performance.  Initially it would hesitate to start and would often make short little skips.  At first I though it was "baby's bottom" or, perhaps an issue with tine spacing but I never seemed to get up the nerve to deal with it again and just left it in a pen case as something nice to look at.

Recently, I have gathered new interest in this 1946 Vacumatic and began carefully toying with things one little step at a time trying to discern what is wrong.  Ultimately, I came to the conclusion that the pen needed more flow so using the method recommended by Richard Binder, I gently persuaded the tines apart just a bit more and the skipping and false starts pretty much went away but I am still plagued with a problem:  When I start writing, the line from the pen is generally a bit wet with a nice saturated line but, as I write, the amount of ink flow diminishes.  I tried spreading the tines a bit more and the overall flow did increase slightly more but I still get the gradual decrease in flow.  That decrease, by the way, does not progress all the way to skipping but simply flattens eventually, leaving me with a pen that writes pretty nicely but on the dry, toothy side with just about any ink.  I have tried about 4 inks including Waterman Serenity Blue, Parker Quink Permanent Black, Sailor Jentle Blue Black, and most recently, some really nice vintage Parker Quink Blue Black with Solv-X, circa 1947-48.  Some inks are a bit wetter and others drier but they all do the same thing...starting somewhat wet and then drying down to a dry writing pen that produces an even, albeit anemic line. I now have a working theory that I would like to bounce off those of you in the forum with far more experience:

My theory is based on the fact that this pen originally had a fine point nib and the feed was obviously meant for that nib.  My decision to move to the stub really required a reworking of the feed so as to increase the supply of ink getting down to the nib itself.  I say this because if I take the pen immediately after writing a full page with the nib writing somewhat dry and then cap it and set it aside in a cup, sitting nib-up for about 20 minutes or so, when I again try writing with the pen it is as wet as ever for about 3-5 lines and then begins the slow degradation in flow in spite of the fact that the tines' gap, in my opinion, is now excessively wide approaching .002", if not slightly more.  Am I correct in the assumption that there is nothing wrong with the nib as it is apparent that capillary flow to the tip of the nib is taking place with the pen capped and at rest, even with the nib pointed up?  This tends to tell me that the nib slit and tip are doing their job in the capillary flow department.  The restriction must be taking place in the feed itself.  Your thoughts?

Can't help you, but have you run a thin brass shim throw the slit, perhaps ther's a bit of dried ink in the feed channel.

Your inks don't seem to be a problem like supersaturated inks could be, in they eat rubber.

Could it be the sac?

Did you use any supersaturated ink before the tine broke?

Can't help you, but have you run a thin brass shim throw the slit, perhaps ther's a bit of dried ink in the feed channel.

Your inks don't seem to be a problem like supersaturated inks could be, in they eat rubber.

Could it be the sac?

Did you use any supersaturated ink before the tine broke?

Thank you for the suggestions.  Yes, I've done the brass shim.  In fact the tines are farther apart right now that I believe would be appropriate.  At the time the fine-point nib broke, I was using Sheaffer Skrip Blue and Blue Black, neither of which would be considered highly saturated inks.  The pen has been flushed numerous times with a 10% ammonia solution with a drop of Dawn detergent in it for good measure.  The pen is a Parker Vacumatic so it doesn't use a sac, holding its ink in the barrel of the pen.

The issue seems to be one of switching over to the stub from a fine psoint nib.  Widening the space between the tines does increase flow but only initially, the odd thing being that I can write the pen down to where the pen is writing a bit dry, put the cap on it and leave it with the nib straight up.  If I wait about a half hour or longer, when I come back the pen will write with a very wet line for several lines and then begin reverting back to the more dry-writing state.  From this I am deducing that perhaps the feed, which was originally mated to a fine point nib, has inadequate flow to maintain a proper supply of ink but the nib, due to the wider space between the tines, can provide a very wet line if the feed can supply enough ink.  At this point I believe I could put the tines closer together and reach a point where the initial line written would be of the same intensity as the feed could supply full time.  This would eliminate the gradual drying down because the tines would be adjusted to only supply that much ink to the paper.  The problem is that I want more flow, if possible.

Cliff you may be right with the feed.

But the Vac does use s sac somehow to fill the pen. Got a Vac but don't know how it works. 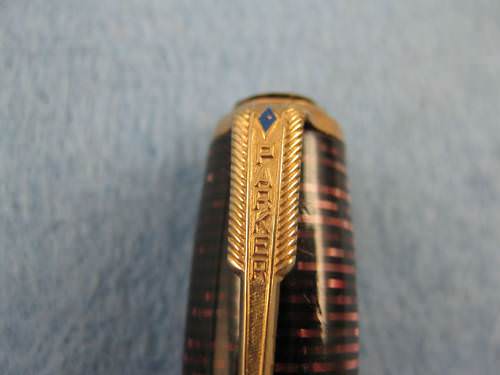 Maybe time for a nibmeister? Many of them will also work with the feed to get a better flow, like carving deeper channels, etc. I don't know if he does this work specifically, but have had multiple good experiences with Mark Bacas.

Also tagged with one or more of these keywords: parker vacumatic, ink flow