It's been a while (years in fact) since I've dipped into the fountain pen world but I'm here today with a brief review of a recent purchase from Goulet Pens--the Namiki Yukari Herb Decoration pen with M nib. More details ahead~

First Impressions – The Namiki Yukari Herb Decoration came in a very prettily packaged paper box that cleverly left an "open side" so you don't have to struggle to free the wooden box within: 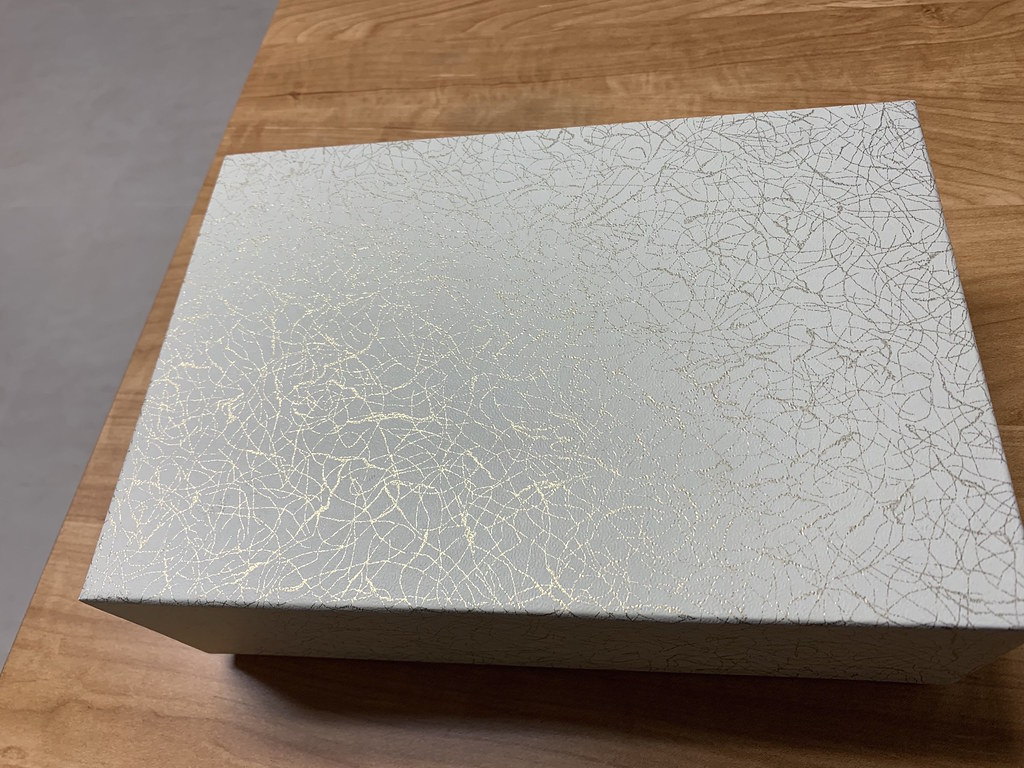 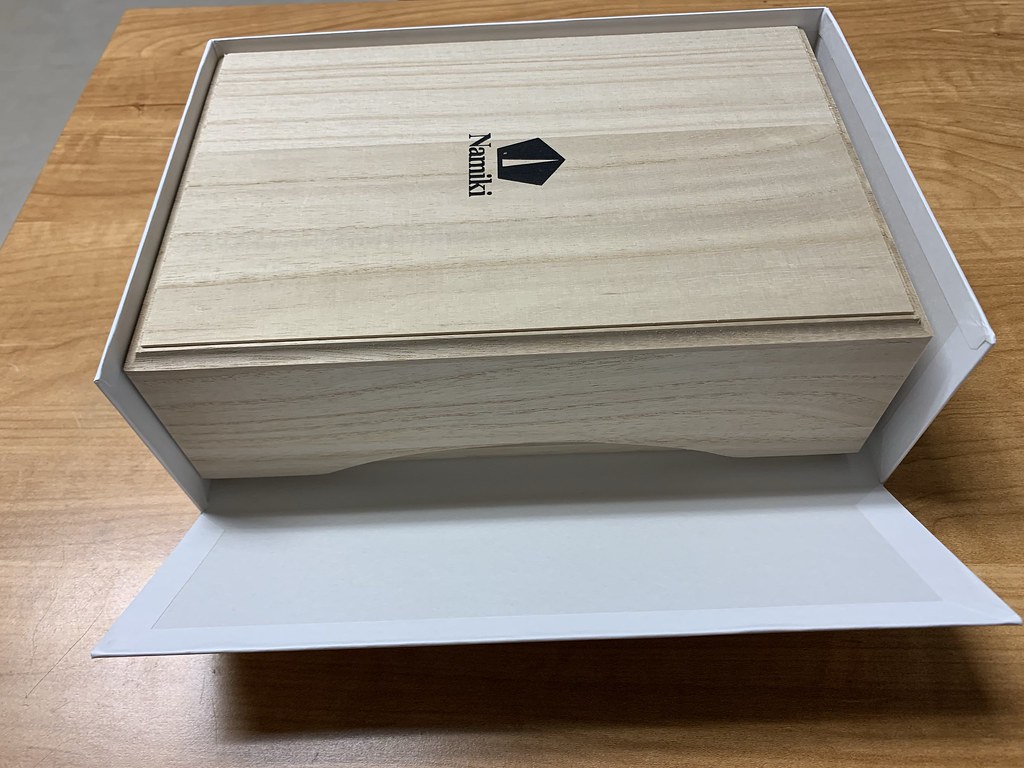 Inside you have the usual user care guide along with a lifetime warranty card and a Namiki booklet. The foam padding rests perfectly above the cap of the bottled ink. 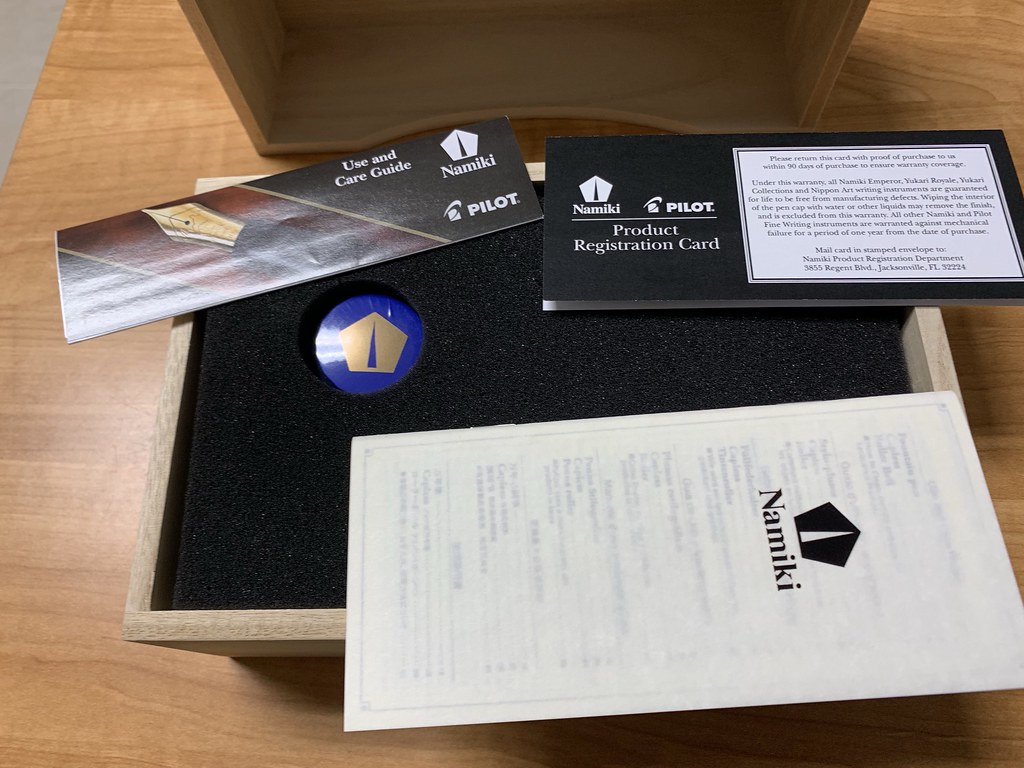 Everything is packaged very nicely and wrapped in plastic atop a red velvet base. I appreciate how they plastic-wrapped the ink bottle too in case of unforeseen leaks. 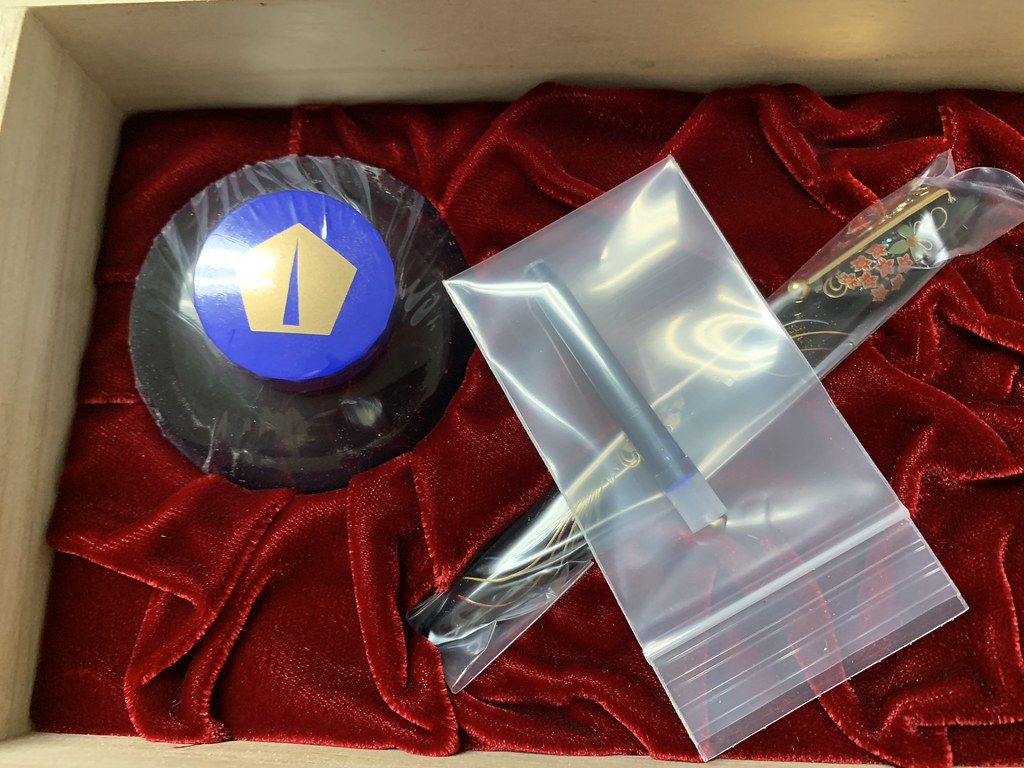 Here's the pen disassembled. In addition to a free ink cartridge, the Namiki Yukari Herb Decoration comes with a push-button filler, which worked like a charm. More on that below. 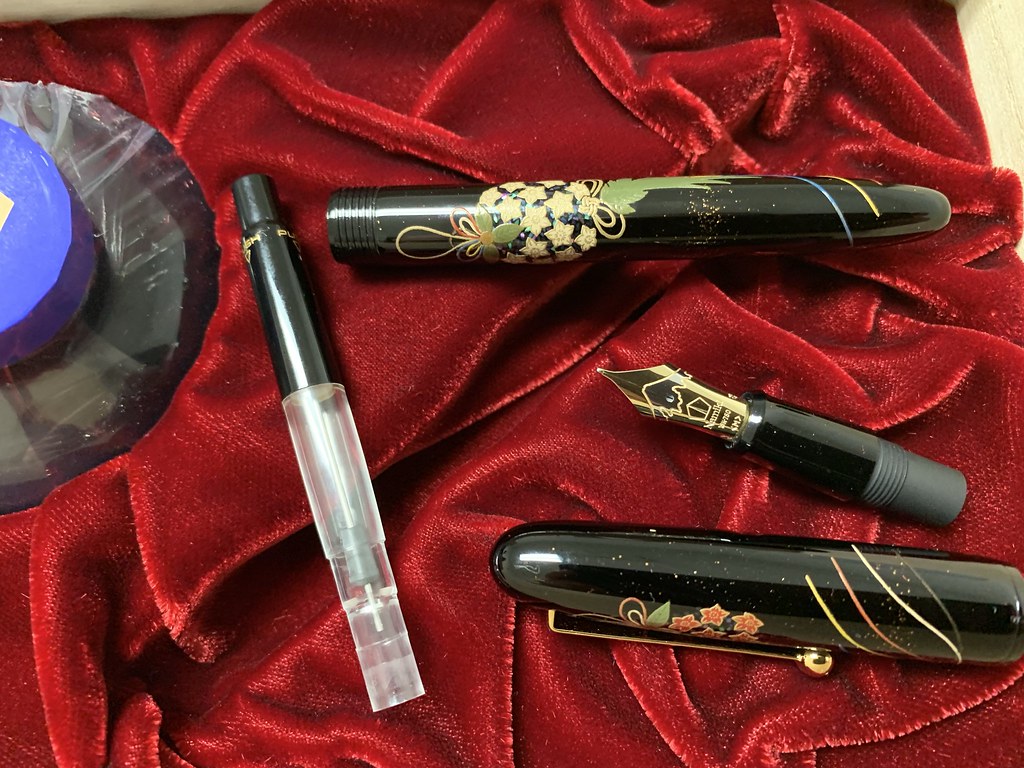 Appearance & Design (9) – If you want the good photos, check out Brian's pics at Gouletpens. Under normal office lighting the pen simply looks "black" with maki-e designs. The raden bits behind the flower/herb bunches glitter very nicely and the designs have a "raised" texture to them, which some might find distracting but which I find wonderful as a tactile sensation. Everything fits very well--there's a velvet lining in the cap so you can post your pen, and the ball-shaped clip holds on firmly to paper when needed.

One thing that bothers me is that the maki-e on the body is covered by the pen cap when you close the pen. D: This is a pen that looks great uncapped but that tiny detail bothers me the slightest bit. I keep worrying I'll rub off the design if time goes on... 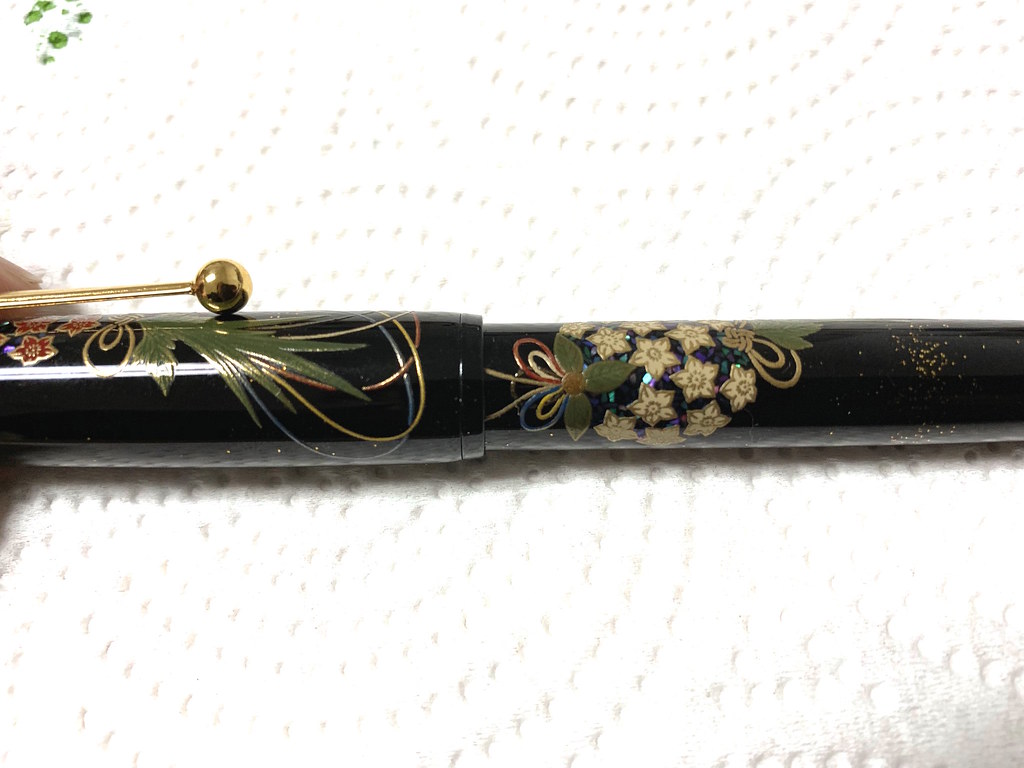 Comparisons of the pen capped (above) and uncapped (below). I adjusted brightness on these two photos so you can see where the overlap occurs. 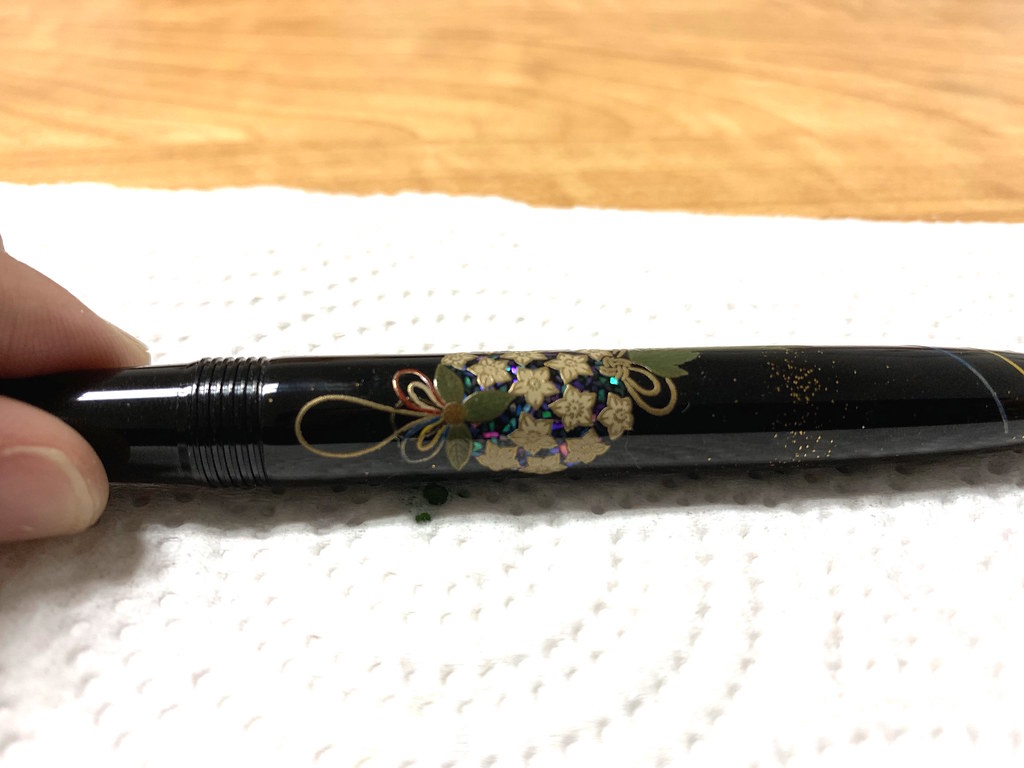 I'm not sure if this was an intentional design choice, or if the base design of the Yukari made it impossible to harmonize the pen design and the cap, but because of that I give it less than a perfect 10.

Construction & Quality (10) – A solid, seamless work. What you see is what you get. The barrel threads are crisp and exceptionally clean (inside barrel threads too!) and the lacquer work is immaculate. It does tend to attract fingerprints; but then again, what urushi doesn't. = u = I love how the clip fits into a slot on the side of the cap so well that it might as well have floated out of urushi. I also appreciate how there's no loose bits of plastic, ebonite, or what have you that I need to brush off, which has been the case in some other pens I've bought. This one looks like it walked right off the presses without a single hair out of place.

Weight & Dimensions (8) – The Namiki Yukari, when capped, weighs 33g or the same weight as a capped Visconti Rembrandt, my first fountain pen. I had to return my Visconti because it was too heavy to write with, so I had reservations about the Namiki. Fortunately, it is much more manageable (and shall we say balanced?), and the nib writes effortlessly against the paper with no weight. The brass elements are all hidden beneath the pretty lacquerwork so you only see and feel nice smooth urushi when you write.

You can still feel the weight against the web of your hand when you write tho, and that does get noticeable after a while for someone with small hands who loves light pens (18g or less, while the Namiki is 19g uncapped and unfilled). For the sake of something so beautiful, I'm willing to shoulder the burden of longer writing sessions just because it's comfortable to write with. Posting the cap makes it noticeably back heavy, so I think smaller hand writers like me should just write with it unposted.

Pretty sure most people will have no issues with this pen's weight, I'm just weak in my fingers. = u =

Nib & Performance (9.5) – I bought this pen with one of Namiki's standard medium nib and tested it using Kobe #19 Minatogawa Lime ink. In terms of line thickness I'd say it's a hair thinner than a Western medium you'd find on the likes of Montblanc or other European brands. The nib itself is fairly firm, with the faintest hint of give when pressed on--so I'd classify it as "slightly springy." I'm a light writer, so it takes effort for me to achieve flex on stiff nibs. This one to me feels just right--I don't like nibs that are completely stiff. 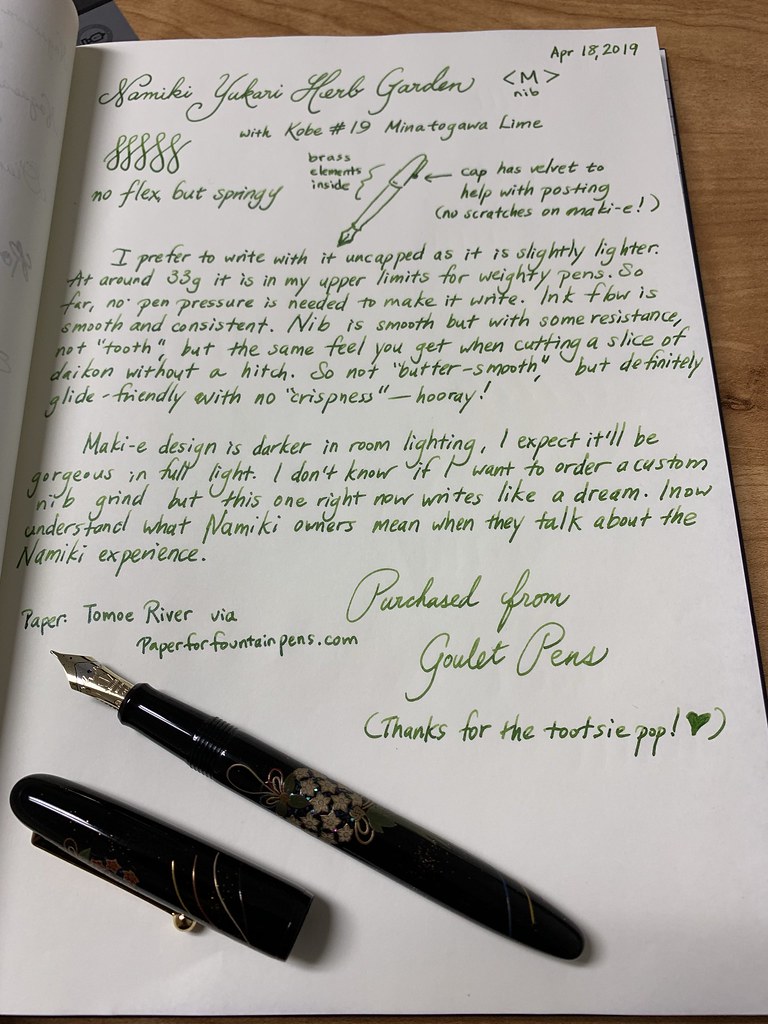 It's also different from other nibs I've tried before (Danitrio, Edison, various Pilots, Aurora). All of them the brands mentioned there are smooth writers, but to different degrees. I've had glass-smooth, stiff Pilots, buttery wet Auroras, and ice-skating Danitrios, but you'll see that I mention the Namiki nib writes like a very fine knife cutting through a very smooth piece of daikon. There's a bit of "noise" as the nib glides over paper, but no scratchiness; it's a weirdly smooth sensation that I've never experienced before and like quite well. This is a nib I'm happy with right out of the box and I think I'll keep it this way, since it has a tactile writing feel I've never felt before.

Writing wise it leans towards the slightly wet side--again, not too much and not too little. I have a feeling I'm in Goldilocks and the Three Bears and Namiki keeps being the bed, porridge, and chair that fits just right, haha. It's a thin line to walk, so I'm impressed they've hit all the right corners!

The only reason I've given it 9.5 instead of 10 is because I prefer softer nibs, and this one is soundly in the category of "just springy." Don't expect much line variation, but it definitely hasn't skipped!

Filling System & Maintenance (10) - The Namiki Yukari came with both a catridge convertor and a Pilot push-button filler, which I've never tried before. Instructions included in the pen package said all it took was ~5 pushes of the nib dipped in ink up to the breather hole to completely fill the pen. I took around 6~7 pumps, probably because my ink bottle was running a little low. But yes, it works like a charm and fills it up quite well! I expect cleaning it will be equally hassle free if it sucks up liquid so well. 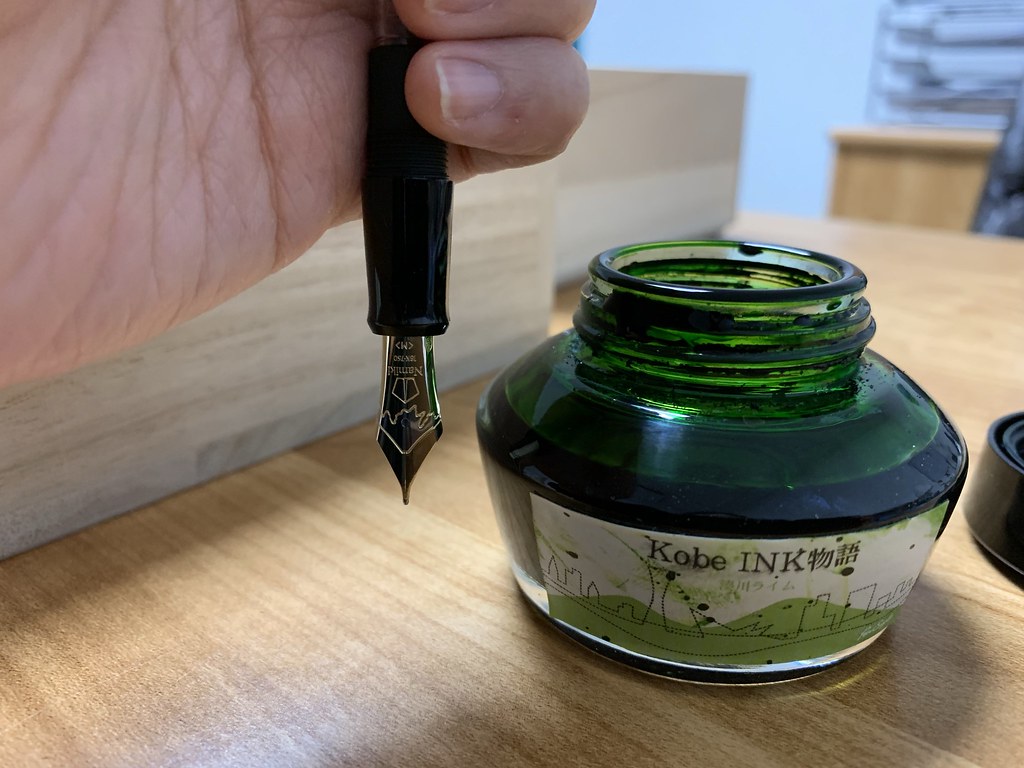 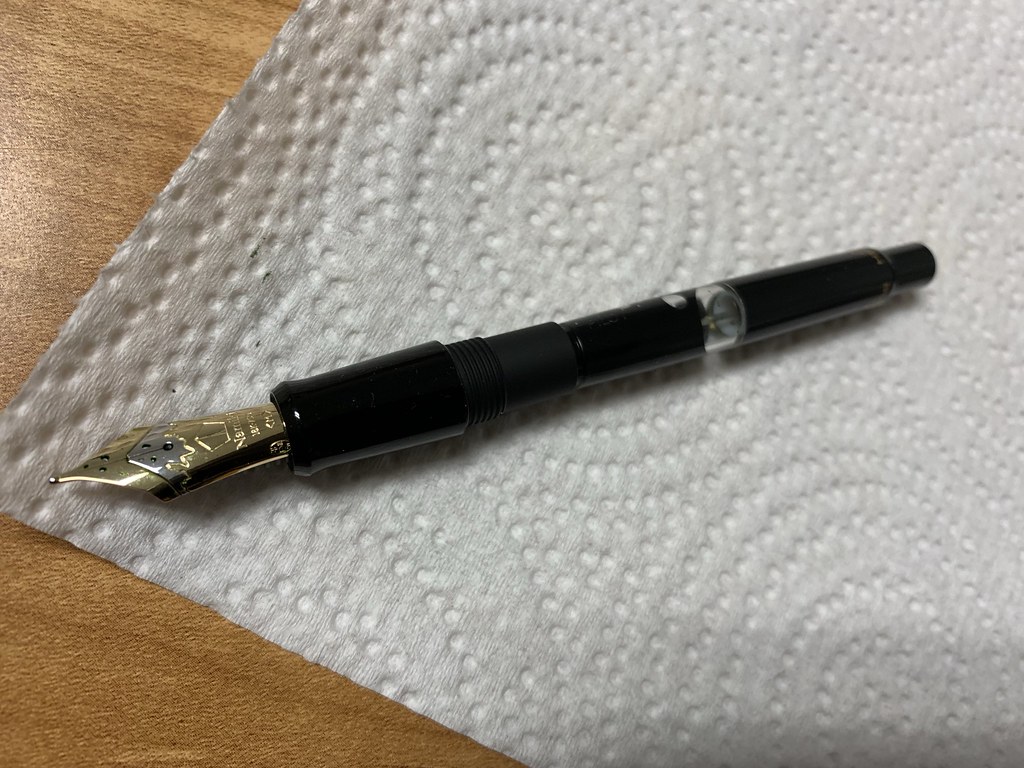 All that black stuff in the tube is ink, yes. I made quite some bubbles in the bottle filling it up, but it was a hassle free and enjoyable experience.

Cost & Value (10) – I was first enamored by this pen courtesy of Brian's amazing high-res photos back on Goulet and the actual article doesn't disappoint. I ended up buying it for the listed price on their site as well. There are a lot of details (better expressed in Goulet's photos) that my phone camera can't do justice to here in office lighting. Knowing that someone had the patience to hand paint layer after layers of the threads and flower petals on the pen, then stick in pieces of raden individually, really makes me appreciate the craftsmanship and value. 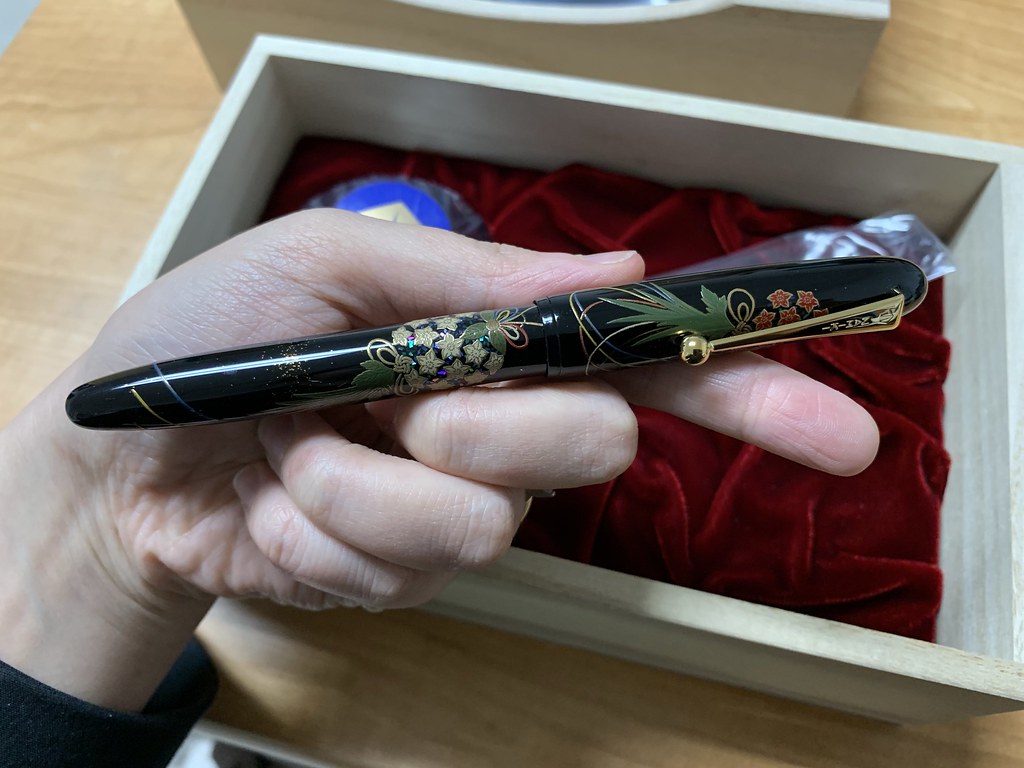 I will say that I've paid slightly less for a similar, custom-ordered maki-e pen with similar levels of complexity and consider this a fair value for the cost. Of course, I wouldn't mind getting it cheaper, but it's definitely beautiful for what it is. The entire silhouette of the pen speaks of seamless grace. If I had a bigger budget, I would've gone for their Apricot Tree and Warbler too...

Conclusion (Final score, 56.5/60) - I like to buy pens I use, so this is going to be part of my daily writers collection as I ease back into using FPs again. I think I'll keep it with the Minatogawa Lime ink because I like the green and it matches the flowers.

I really, really like the feel of the nib--that indescribably smoothness that feels crisp without being scratchy, and though I'd prefer it to be lighter I can deal with a bit of weight. Now I'm just repeating myself...

Namiki is worth its reputation, and its pens have their own unspeakable charm. It's not anything obvious, but the sum of various subtle, tiny details that add up to make the difference.

I'm never jaelous, but this comes close :-). Enjoy the pen, Jadie! It's a lovely piece.

My gosh, that's a wonderful pen...

Nice pen, thanks for sharing. These always seem to write well.

Also tagged with one or more of these keywords: namiki, namiki yukari, maki-e