Today I'd like to discuss the Krishna "Vaikhari" ink - a complicated orangey-reddish-brown with heaps of olive green metallic sheen.

Krishna is an Indian ink brand, which is a relative newcomer--especially to the European and American markets.  If I want to fault this ink in one way that irks me, it would be the pricing of the tiny 20ml ink bottles outside of India.  Apparently you can buy these in India for $3 or less a piece (doing a currency conversion), but in the USA these cost $8-9 per bottle for the RC and Super Rich lines.  Considering we only get 20ml of ink, it's not a particularly budget-friendly option if one wishes to use a lot of a particular color.  Using this ink almost begs for a juicy writing pen with a wide nib or flexible nib, so going through 20ml may not take very long.  I hope Krishna's distributors reconsider the pricing of these inks.

With that said, "Vaikhari" is a very exciting ink!  Everything about it is bold and complex. 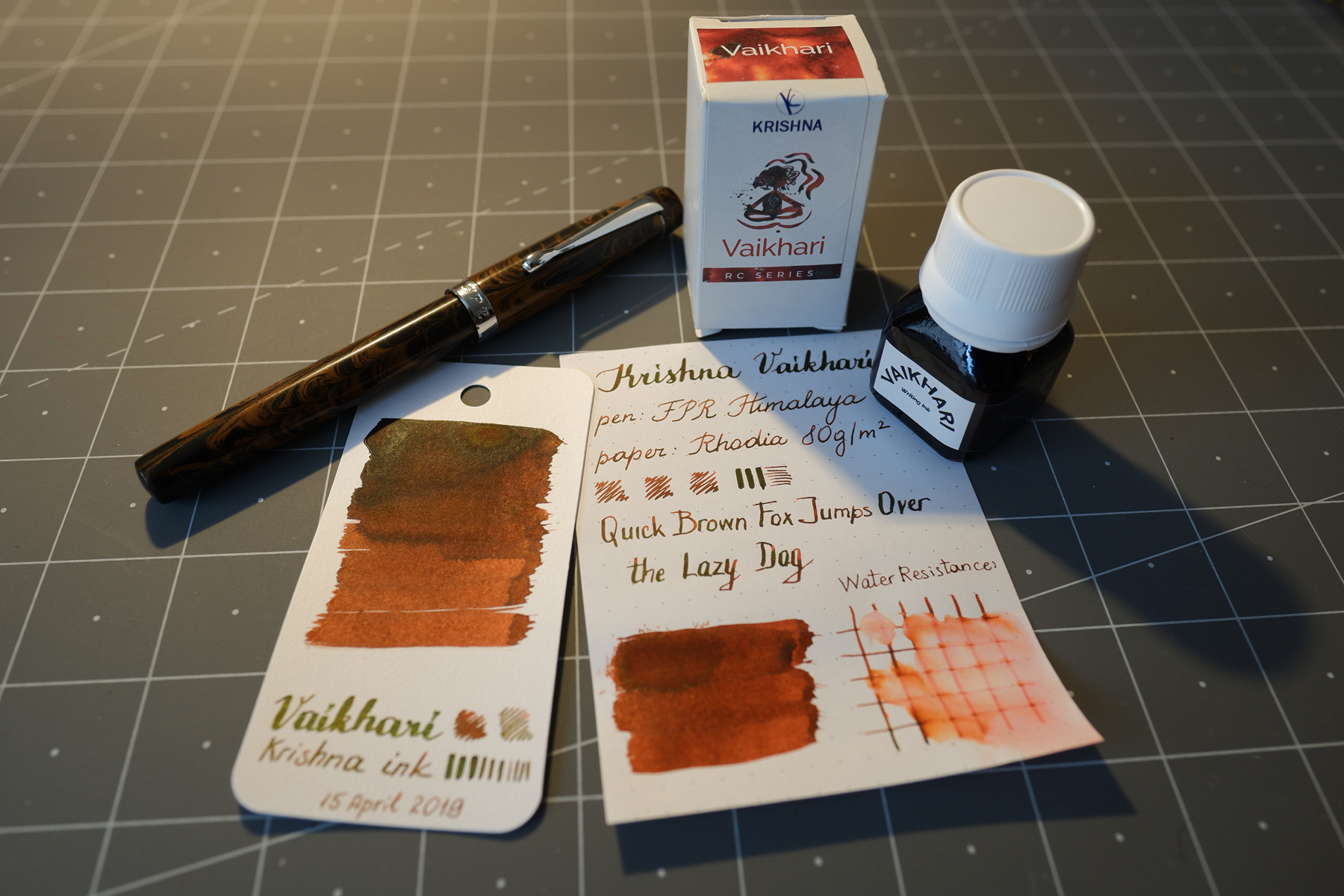 Firstly, the hue.  My scanner just flat out refused to get it right (as well as Waterman's Absolute Brown), but I'll present scans anyway, for completeness.  The photographs do a much better job representing the colors accurately.  There is a further complication to the hue--it's actually quite variable in itself.  I would compare this ink to something like Diamine Ancient Copper: it can look different based on lighting conditions, and how much ink you put down in a line also matters.  And finally there's the sheen--lots and lots of sheen!  This ink sheens at least as easily as something like Sailor Tokiwa Matsu, and perhaps even more so.  Likewise with Colorverse Dark Energy.  Thus the areas with more ink start shifting toward olive green, further complicating the overall appearance.

Indoors with natural light, the red-brown component of the hue will be more prominent.  With artificial lighting, the red takes a step back and orange-brown are much more prominent.

Sheen: lots of sheen!  Sheen lovers should be happy.  Even on crappy paper and even without particularly juicy writers, you can see at least some sheen peeking through.  The appearance of this sheen is almost identical to that of Colorverse Dark Energy in hue and to sheening Sailor inks (like Tokiwa Matsu) otherwise.  It does not look like smooth metallic sheen of Organics Studio Walden Pond Blue--has more texture and almost matte appearance in transition areas.

Water resistance: poor!  This ink is very concentrated, and water droplets turn writing into a smeary mess.  Carefully dabbing away the liquefied bits, there is reddish-pink line remaining.  If one is able to carefully wash off all of the smeared portion, the writing left behind will be legible.  Otherwise, the concentrated smeared portion will obscure the paler pink-red water-resistant lines.

Drying times: are actually quite good, considering the high saturation and amount of sheen with this ink.  Unless you are using a very wet writing pen, where you might need to wait for up to a minute for puddles of ink to dry, the writing should be fairly dry within 15-25 sec.

Smearing: There is no smearing once the writing is dry, even on the highly sheening spots.  I suspect there is some thickener added to the formula, because while moving a fingertip over the writing, one can feel the roughness of the surface where the ink concentrated.  Not everywhere, just where a lot of ink pooled up--the texture can be almost gritty.

Feathering: none on good paper!  Even on crappy paper it's somewhat usable with a low amount of feathering.

Scent: none while writing with my bottle.  Sniffing the ink in the bottle, there's something that smells like phenol to my nose.  I like it!

Bleed-through: none on good paper, only where a lot of ink pools up.

Phototraphs - both with natural indoor daylight and with a good quality indoor LED artificial desk light. 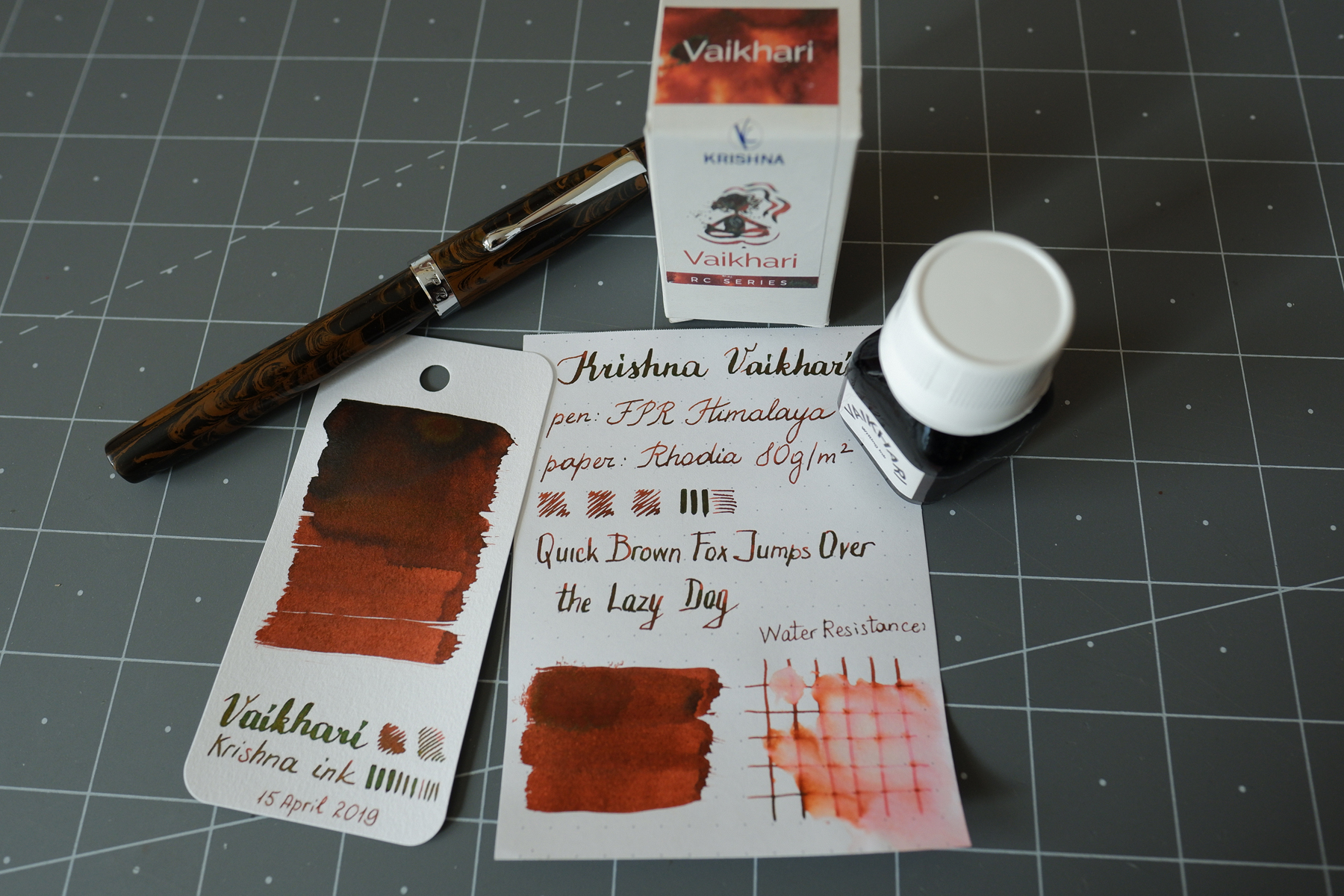 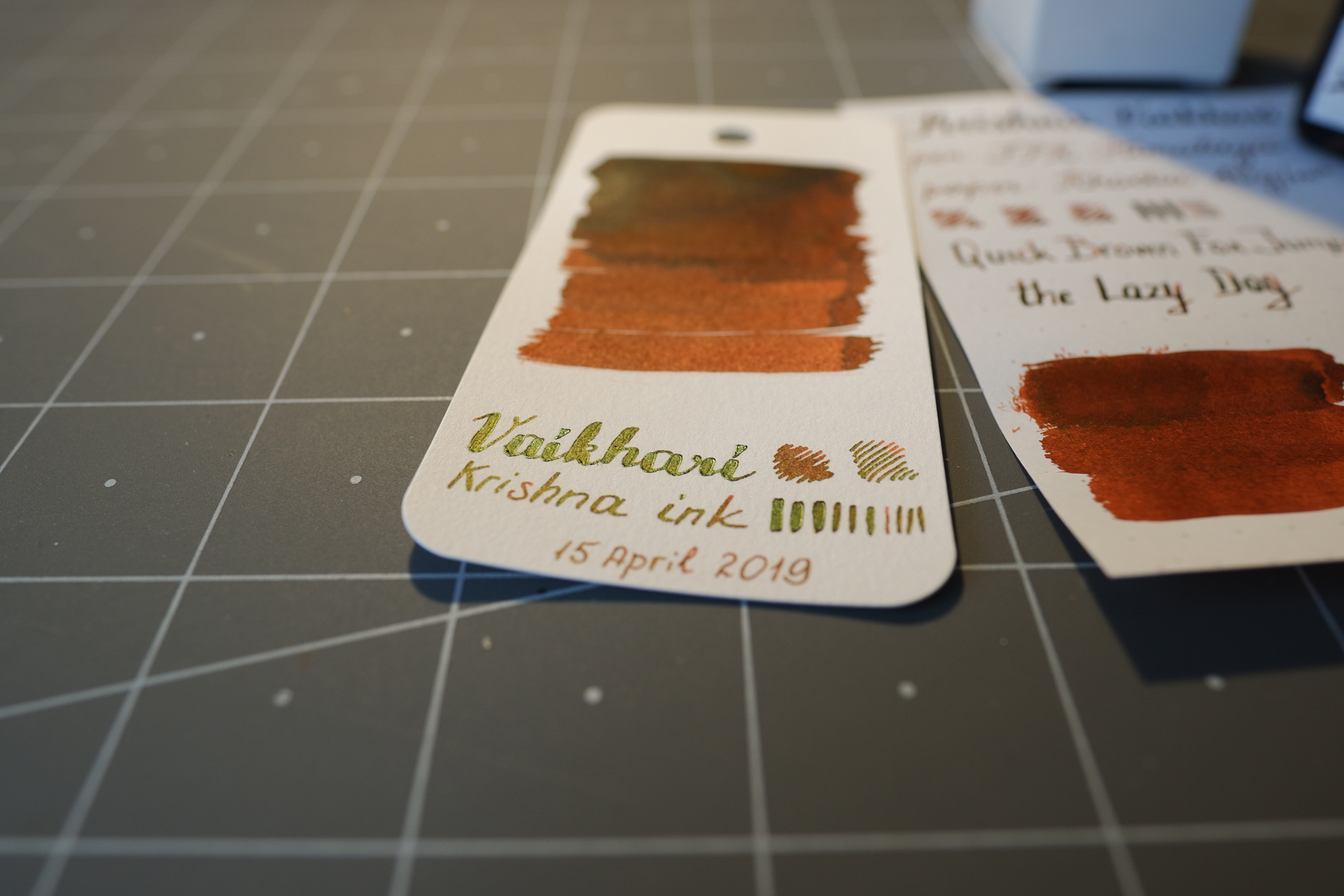 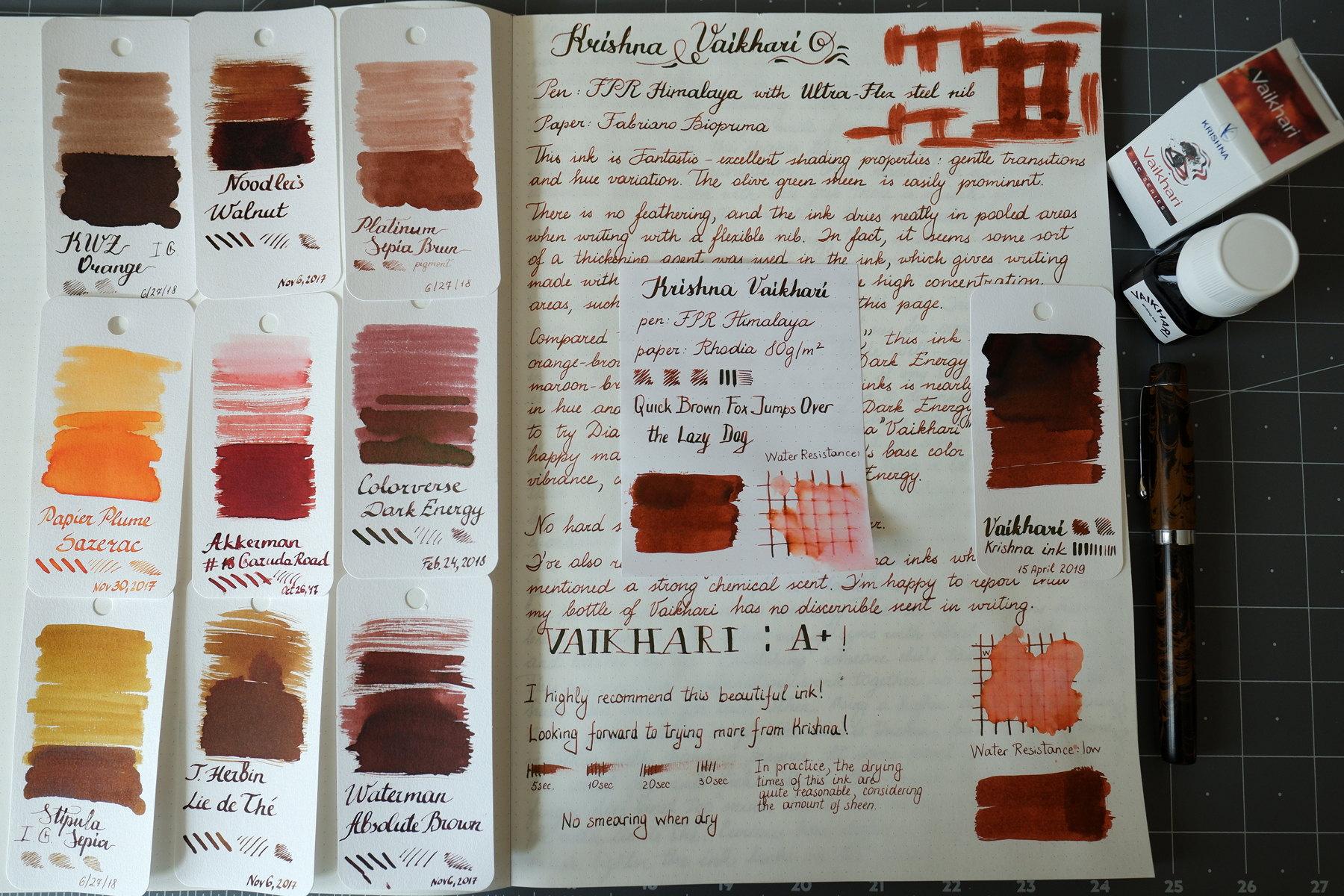 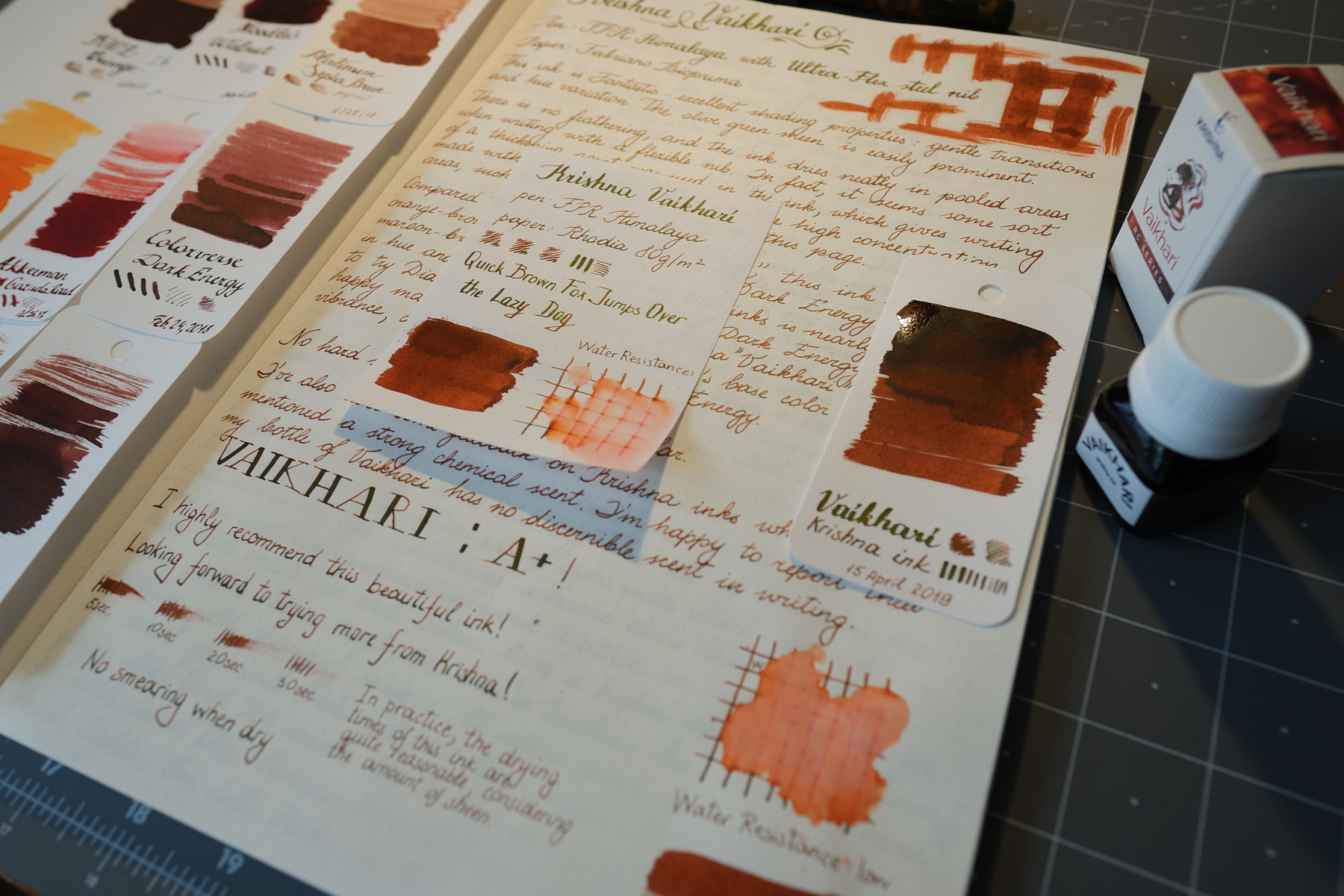 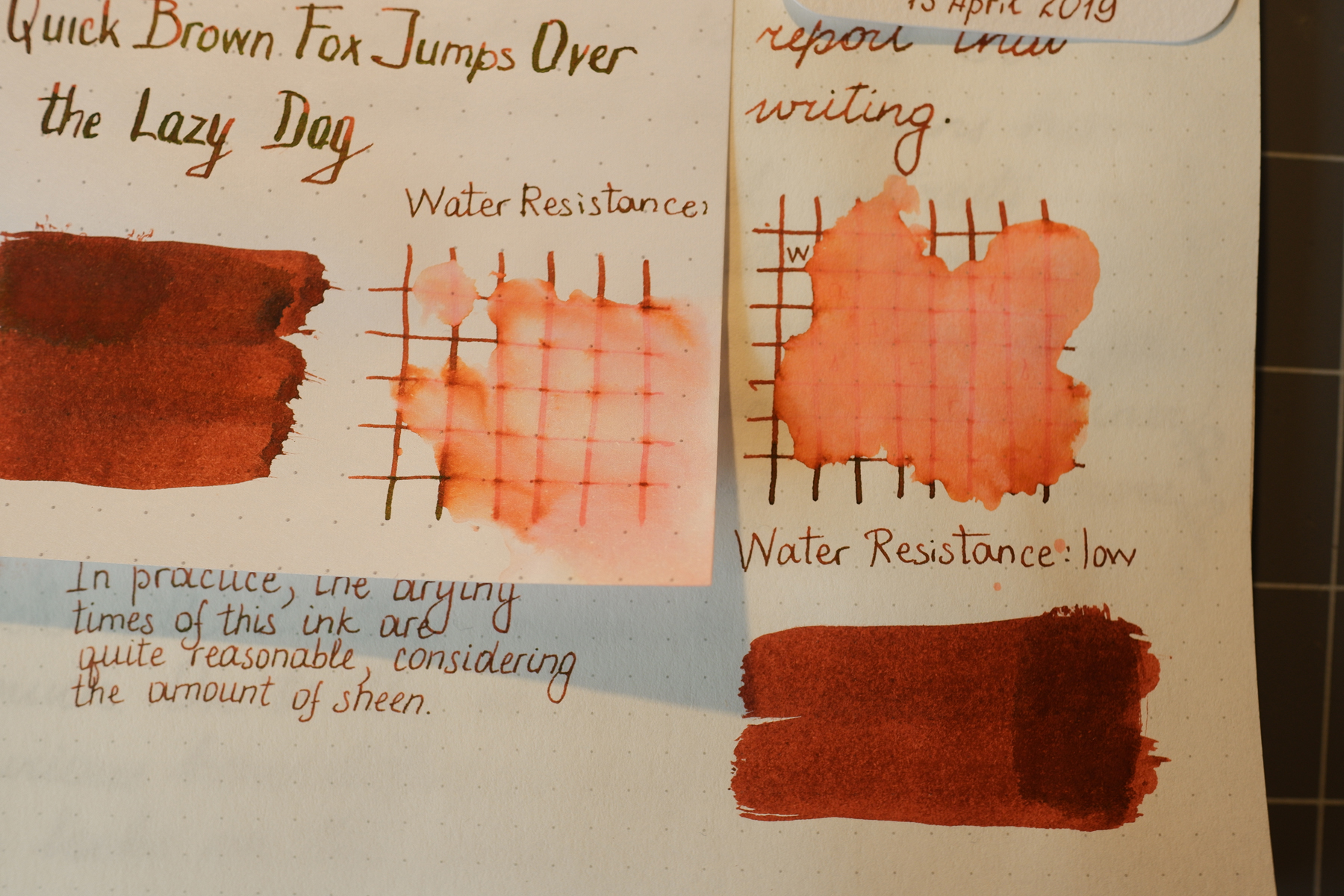 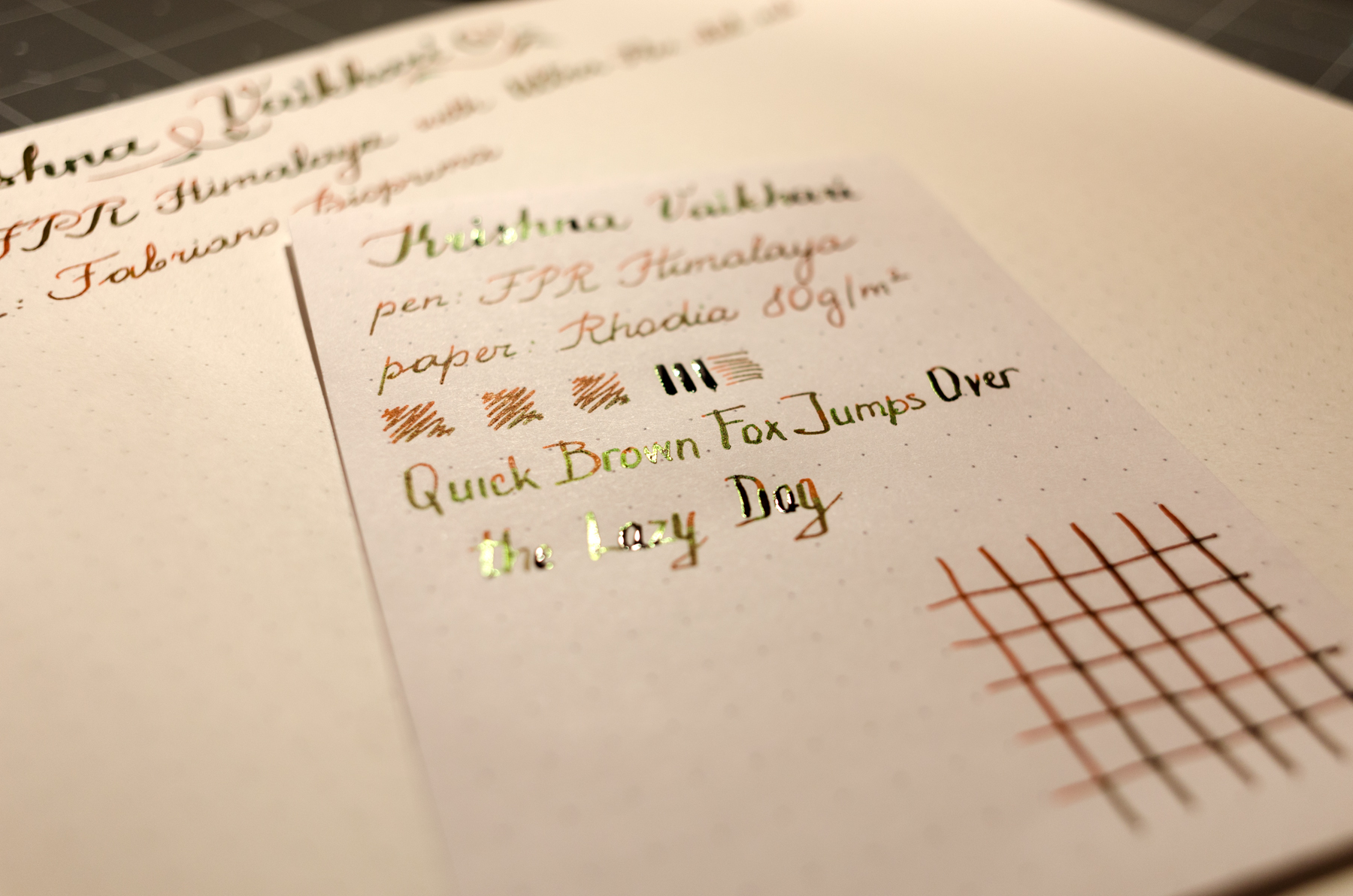 SCANS - SOMEWHAT INNACURATE COLOR WARNING (Waterman Absolute Brown is too magenta here and Vaikhari should be a bit less maroon.  The rest look fairly close to me.) 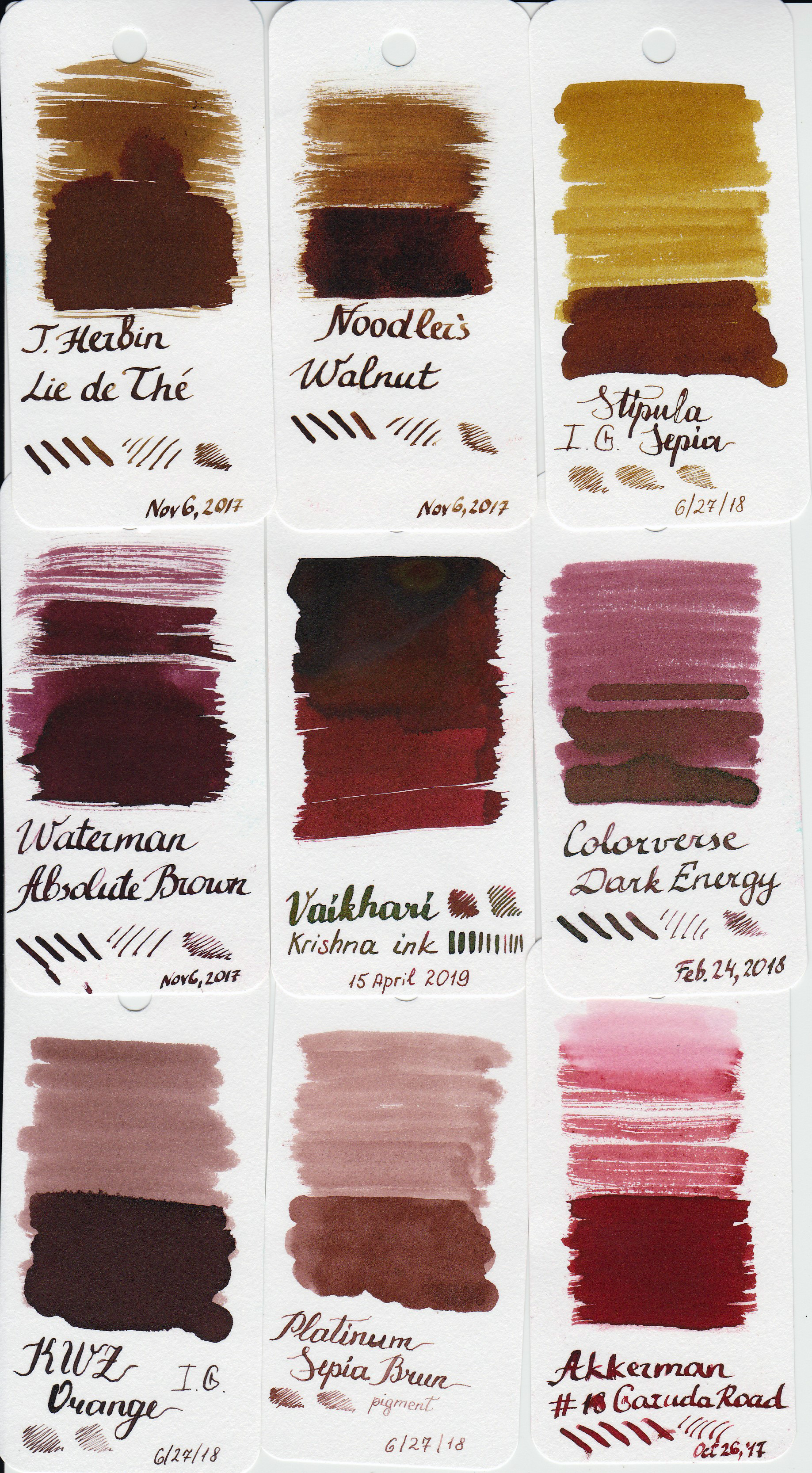 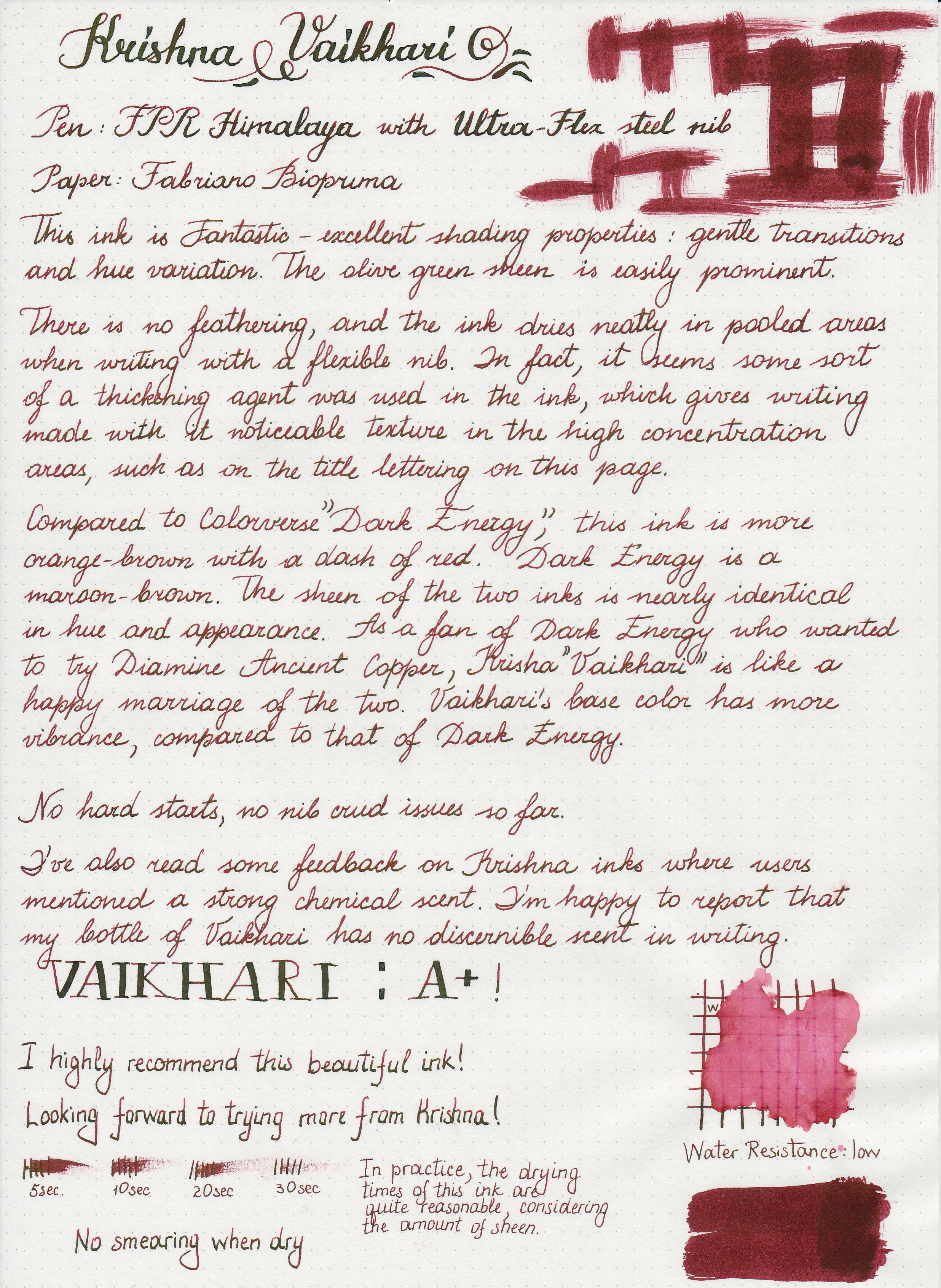 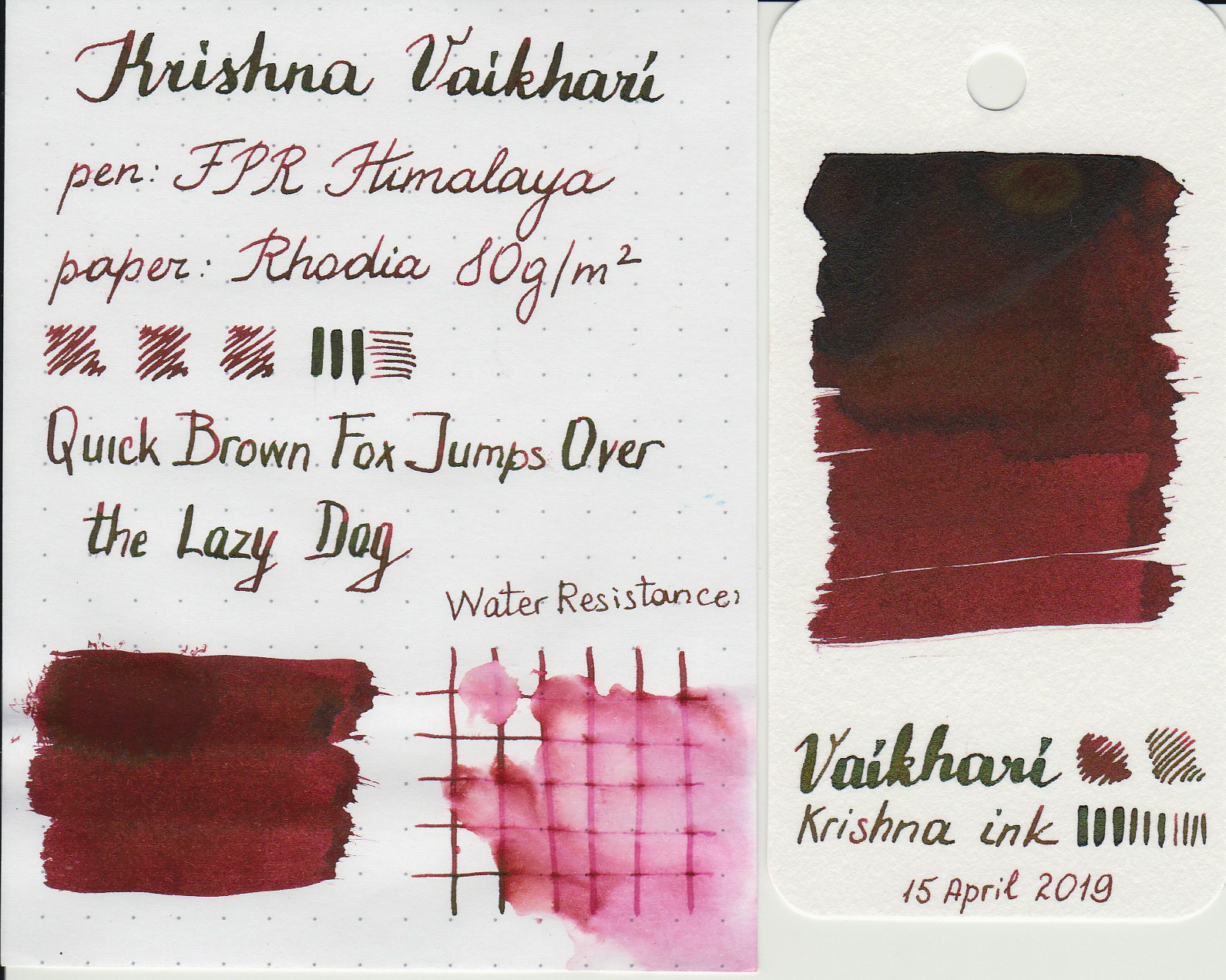 lovely color. I just wish they came in better bottles. I got a bottle of jungle volcano and I love the ink, but I really don't love the bottle.

Your reviews are supurb !

Also tagged with one or more of these keywords: krishna, vaikhari, ink, sheen