My Pens, An Inexpert First Review

I began writing with a fountain pen this year (hoping to improve my handwriting), so please forgive if this isn't the most informative review you've ever read. I've read a few here on FPN, and this will not be as well-rounded as those reviews. I have four fountain pens; a Pentel Tradio that I picked up from Staples, which costs around $15. A Pilot Varsity, which is a disposable fountain pen that costs less than $5. A Speedball calligraphy pen I picked up at Michaels. And finally, a TWSBI Eco, which costs around $30. 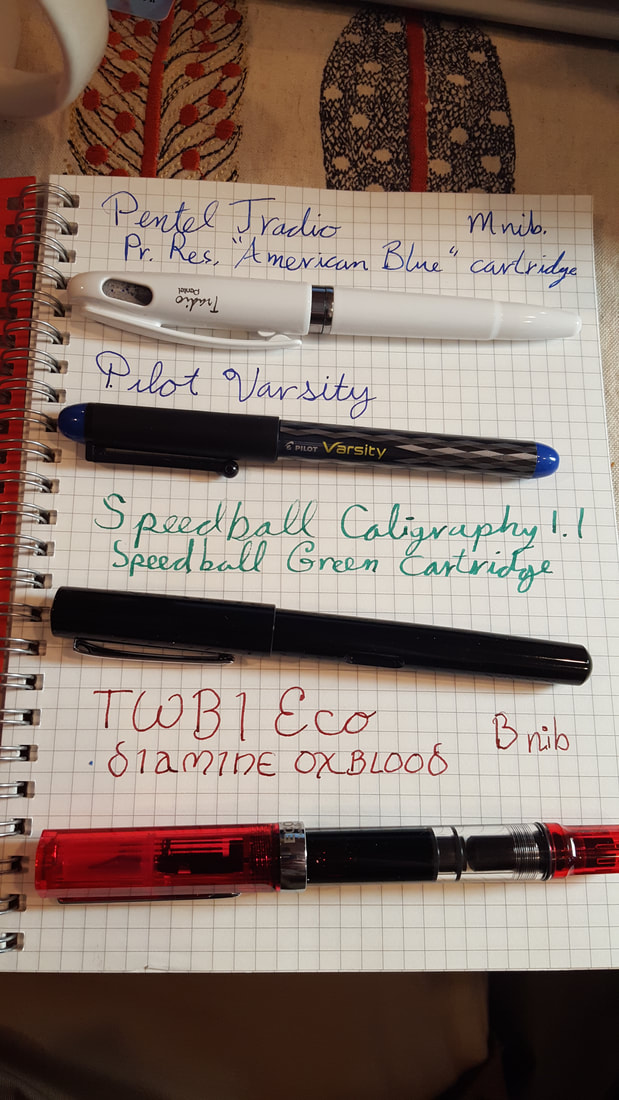 I wrote the inks I'm using on the image by the pen name.

The Pentel Tradio came with a very, in my opinion, dull color of blue. Being winter, I found it kind of depressing to look at. So, I replaced it with Private Reserve "American Blue," which is just what I want a blue pen ink to look like. I don't have the expertise yet to talk about ink performance. The Pentel takes standard international cartridges. Mine are "short," and fit fine, but they also take the long ones. My Pentel skips a lot and the nib catches onto the paper. I'm using a Fabriano paper for this demonstration. I'm looking forward to trying more types of paper over the next year too.

I was wondering how much of the skipping was my inexpertise with using a fountain pen (its only been a couple of weeks now). So, I bought the disposable Pilot Varsity. I wouldn't call the ink blue, though that's what its advertised as. It looks purple to me. Maybe indigo. That doesn't really come out much in the image above though. Here's another picture, which might show the inks more clearly. I hate to say it, but for these specific pens at least, the $5 Varsity writes better than the $15 Pentel. It is smoother and skips less. I began carrying around the Varsity to work (I teach part-time at a university). Both are a medium nib. But one part of beginning to use fountain pens for me is being less ecologically destructive (the book I wrote on ecology and music), so the Varsity won't do as a long-term solution. 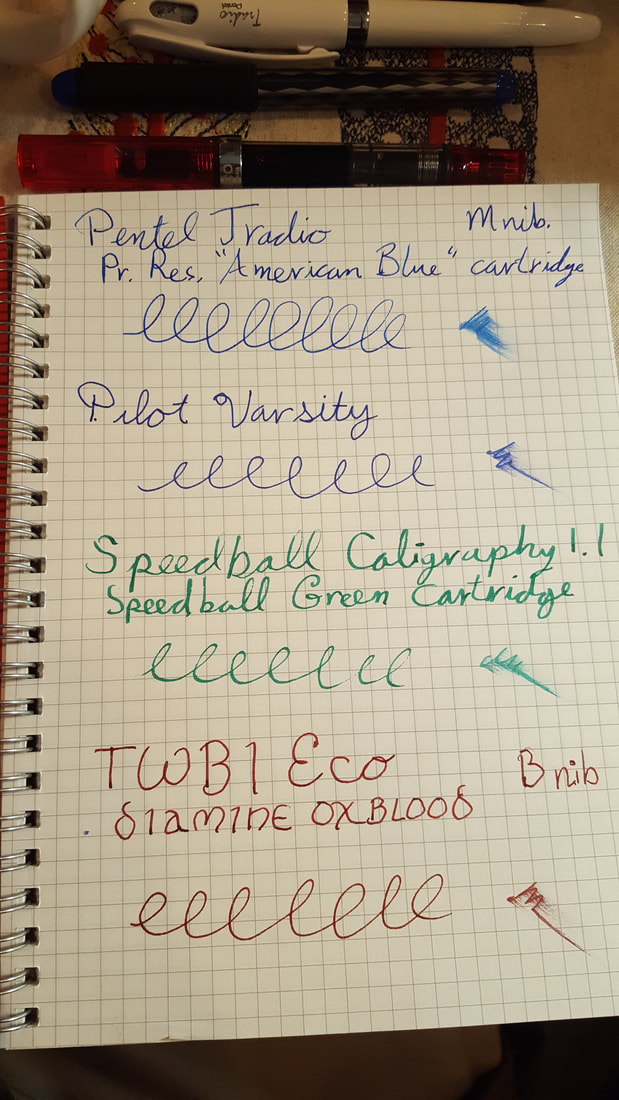 I also wanted to try a Calligraphy pen, so I picked up the Speedball at Michaels. It's a 1.1 nib. I don't really like black ink that much so I got a green (also Speedball) ink, and it looks fine. It is actually smoother than the other two. But I'm not going to use a Calligraphy pen for my everyday work. Still, perhaps something with a slightly broader nib might still work.

So, I bought the TWSBI Eco with a broad nib. It actually doesn't feel any broader than the two medium nibs above. But it writes a million times smoother than any of the other pens I own at this point. It was worth the $30. I am using the Diamine Oxblood, which I am using to grade papers. It works surprisingly well even on bad papers. It is smooth and doesn't get caught on any of the student papers I've used it on. My friend Matt has used and repaired fountain pens for years (I went to high school with him, way back in the late 80s-early 90s), but I didn't know it until him liking Lamy Pens came up on my Facebook feed. So, I asked him, and he told me about this website, Goulet Pens. I wish I had bought my Eco there, because its 4 dollars cheaper.

If I had it to do over again, I probably wouldn't have bought the Pentel Tradio, because mine doesn't write well enough for me to validate the $15 (its not like part-time lecturers get paid all that well:) I read a lot of reviews prior to choosing the TWSBI Eco, and am grateful that it has a ton of them. Maybe in the future I'll be able to compare the TWSBI Eco to other comparable pens (similar price range), like the Pilot Metropolitan and Lamy Safari. But for now, I'm happy with my choice.

In my opinion, you can't go wrong with either the TWSBI Eco or the Pilot Metropolitan. I think it's just a matter of preference on the look of the pen and which filling system you like.

Looks like you have made a good start down the Fountain Pen road (rabbit hole!)

Thanks putteringpenman! That's the other one in that price range I was considering, and will probably get at some point down the road.

Ha! Pakman! That is probably accurate!

Thank you for sharing the perspective of a contemporary new fountain pen user.

It is good to see that big box stores are offering fountain pens.

But, as you pointed out, it is annoying that their cheapest fountain pen is disposable and disappointing that the Pentel Tradio is such a poor performer.

For $30 you can get a Safari in various colors or a Vista (a clear Safari).

I started writing with a fountain pen when fountain pens display could be found in bookstores and stationary stores, even in small towns.

I discovered the Lamy Safari/Vista/All Star (a slightly more expensive metal Safari), around 2000 and have been collecting the colors that please me, ever since.

Lamy has also nicer pens, which are more expensive like the Aion, the Studio the Scala and a couple of other models.

Come on over to the Lamy sub-forum, which is part of the Brand Focus area of this forum. http://www.fountainp...forum/138-lamy/

There is also a sub forum for TWSBI as well as many other contemporary and vintage brands.

Is it fair for an intelligent and family oriented mammal to be separated from his/her family and spend his/her life starved in a concrete jail?

Thanks Anne-Sophie! I'll check that out.

Great review! +1 for the Lamy Safari by the way - amazing pen for the money!