Australian ink manufacturer, Blackstone Inks, recently released its latest suite: Blackstone Lights, a range of inks designed to appeal to those who prefer less saturated inks than their standard fare.  I've been following Blackstone's progress since it released its first inks a few years ago, and have had the opportunity to test some of their inks before they were released to the market.  This time around, I didn't see the inks till they were up on the JustWrite.com.au website - and I immediately placed an order for four of them.  The proprietors kindly sent me bottles of the two inks I chose not to order (Violet and Black), so I could check out the entire range. 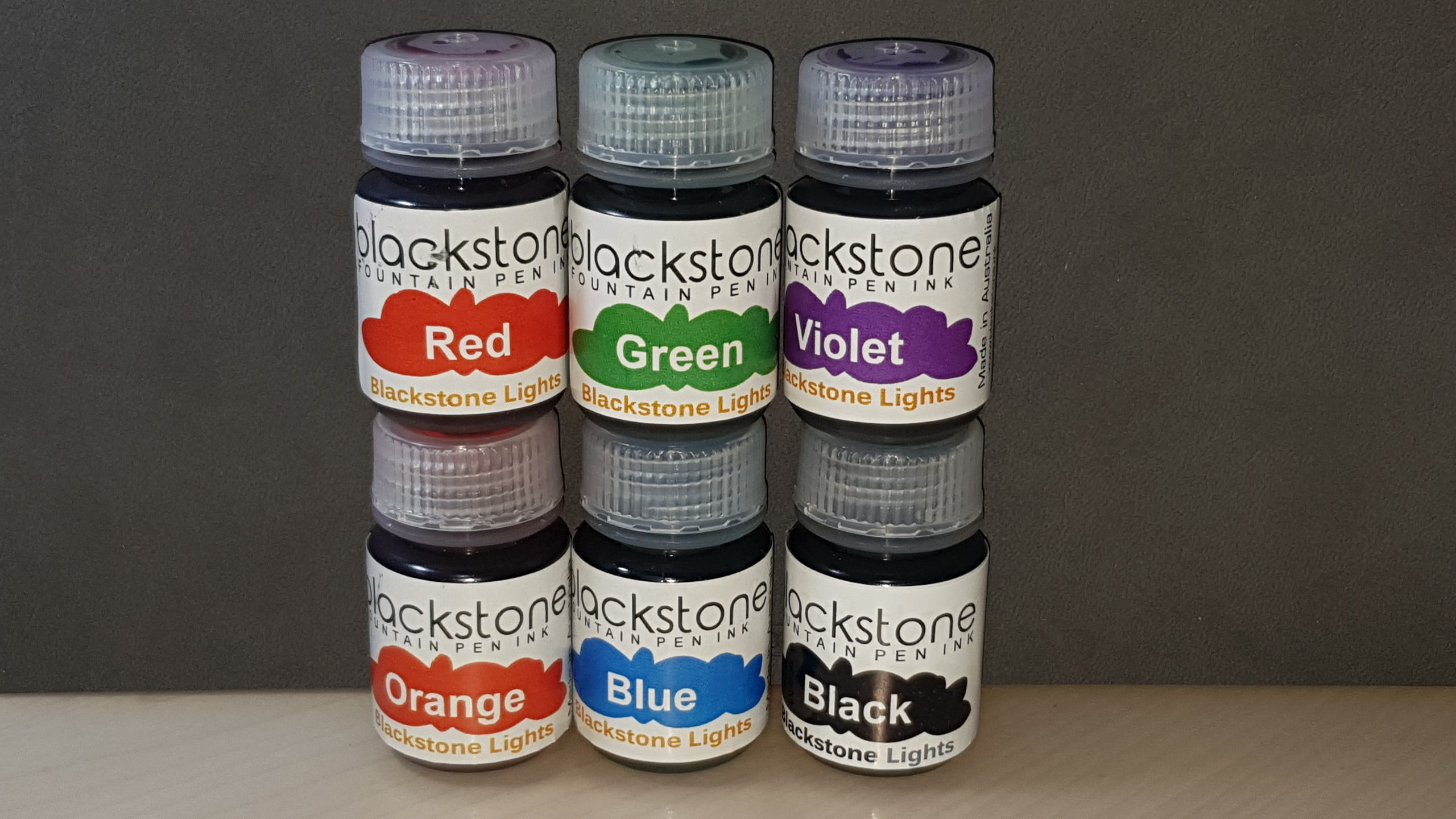 My favourite three inks in this range are Blue, green and orange - all of them bright, vibrant inks that stand out on the page.  Violet would be my least favourite, and Black I haven't tested yet... which leaves the subject of this review, Blackstone Lights Red.  I've struggled to find an ink that I consider to be a "true red" - not pink-leaning, nor orange, but the kind of red my PhD supervisor used to mark up my thesis with when he wasn't happy with my prose or analysis.  It somehow seems to be a difficult colour for fountain pen ink manufacturers to replicate!

My current favourite reds are Montblanc Corn Poppy red (though it's a bit orange-y), and Diamine Wild Strawberry - and sad to say, Blackstone Lights Red doesn't quite live up to their standard.  I'd call it a "true" red, but just a little undersaturated, a little on the pale side.  That's especially notable in the Q-Tip swab sample - but (thankfully) somewhat less so in the FPR Triveni pen I tested it in.

If you like your reds to shade - and/or if you're more worried about getting a "true" red than a "strong" red, this could be a good option for you. I expect I'll use mine, because it's near enough for me to "true", and the ink flows nicely in my pen without drying out or hard-starting.  But I have to say, in honesty, there are other inks in the market that are more bright and more vibrant.

A writing sample, photographed in strong (spring) sunlight with my Samsung Note 8, and not retouched or recalibrated [sorry for the stray bits of blue on the page!]: 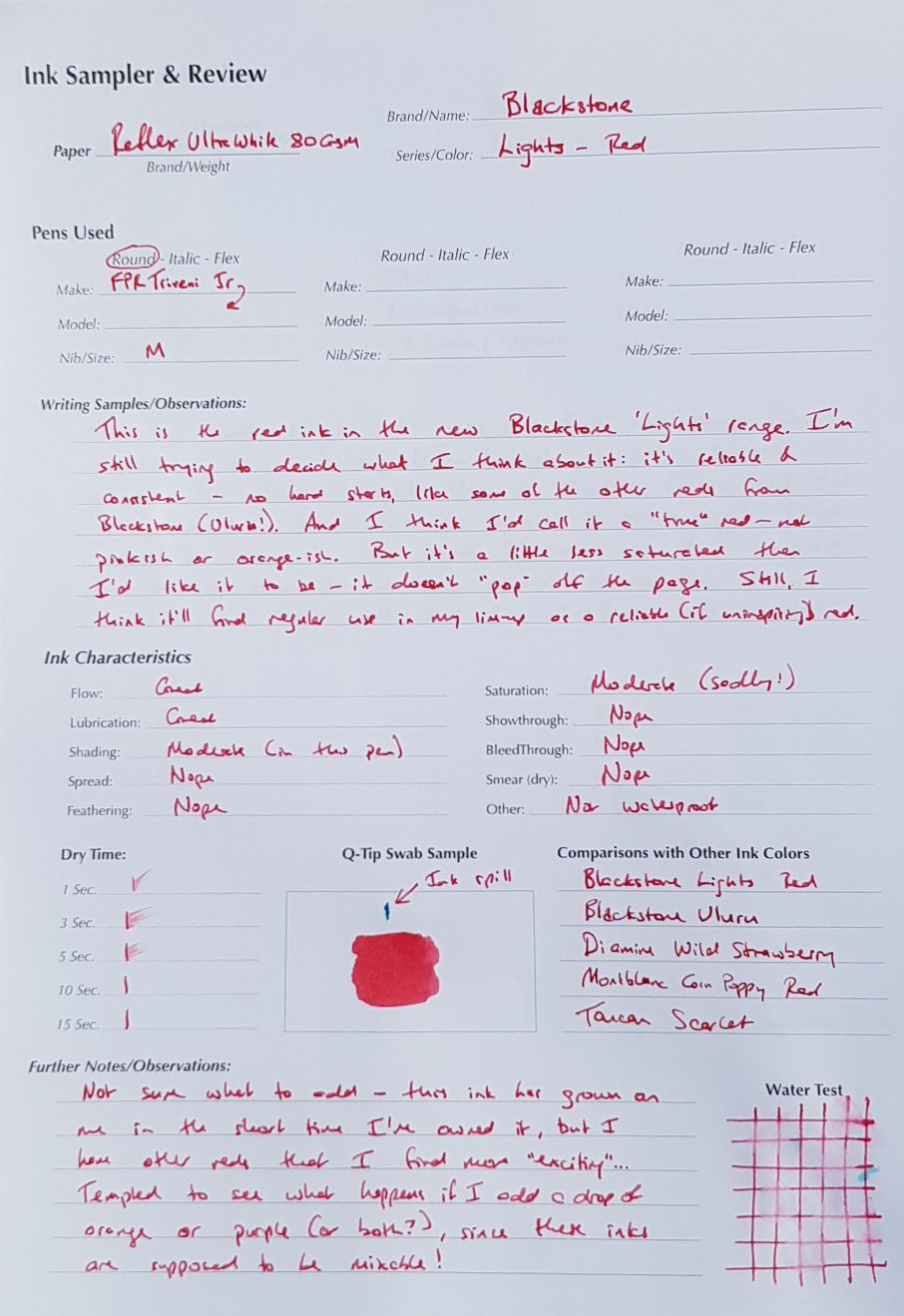 I'll try to get around to black sometime later this week - I'm just having a bit of trouble getting excited about it, given the number of pens I already have inked up with grey, or black, or somewhere in between...

Thanks for sharing all of these new inks with us

Thanks for sharing all of these new inks with us

This looks like a nice middle of the spectrum red (not leaning orange, pink, burgundy or brown).  And the water resistance seems good, too.  So definitely worth checking out further.

Yep - in my emails back and forth with Kevin (the brains trust behind Blackstone Inks) I get the impression this is more of a response to the requests of others than a personal preference of his own - he kept getting requests for less saturated inks (to supplement his existing line), and decided to try and meet that need.

@Jamerelbe, wow, you've been busy! Thanks for the reviews.

@Jamerelbe, wow, you've been busy! Thanks for the reviews.

Yeah, the beauty of taking time off from work - I can invest a bit more time in my 'hobby'!

They appear a little more water resilient than I had expected.

They appear a little more water resilient than I had expected.

They wash straight off Rhodia, unfortunately  - but on more absorbent papers (like the photocopy paper I've used for the review) it seems more water resistant.

Also tagged with one or more of these keywords: blackstone, australian made, inks