The finial of my Diplomat Excellence broke. Some piece of plastic or something snapped, which meant that the finial fell out. I stuck it together with a lump of blu-tak.

I e-mailed Diplomat to ask if it would be possible to get a repair or replacement.

The reply that came said that the pen came with a five year guarantee. If I sent them proof of purchase (a digital copy of my Amazon invoice) they'd send me a replacement cap.

I didn't know that Diplomat came with a five year guarantee (most pens come with two at most).

Nice. I only have two diplomats as current, and I may have to email them about my traveller, it REALLY doesn't hold onto converters well.

I got rid of a light metal C/C Diplomat, that was a nail, it had real good balance. I often regret selling that pen.

A few months ago, my wife found a dark Maltese Cross Diplomat at a German flea market, , Maltese Cross in the Finial (WOG early-mid  '50's similar shape to Soennecken or Original Reform), on the clip, the cap band, and Maltese Cross just before Diplomat on the side. Steel nib (gold wash or plating gone), maxi-semi-flex, Maltese Cross on the nib too.  Don't know what the 20 on the body means. (blind cap)

Wrote down the pen in my card box....forgot to say what brand of purple ink I used.... suspect & now DA Aubergine.

The one below with the gold colored stirrup clip and trim is actually in silver plate but when I buy a pen, I steal the photo. Wife's pen she will never use..........there is a tennis one too. Is regular flex. 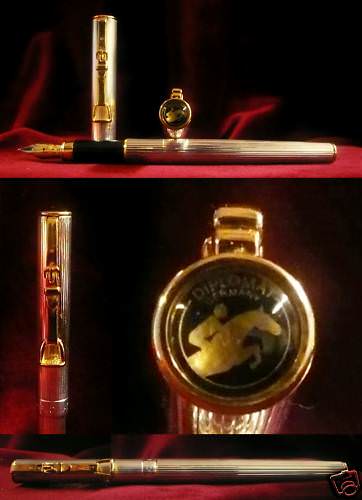 Also tagged with one or more of these keywords: diplomat, cap, repair, happy