I'm planning on buying myself a Twsbi Eco just after Christmas, and I'm torn between which nib to get - A stub or a medium.  Typically I write quite quickly, and reasonably small with a medium nib, but I really love the look of writing with a stub.  There is a photograph of my handwriting written with a Waterman Gentleman with an 18k gold Medium nib, inked with Waterman Black ink.

What do you think?

Get both. Otherwise you will always wonder if the other is the better choice.

Get both. Otherwise you will always wonder if the other is the better choice.

Is it possible to get replacement nibs for the Eco?  I guess I could buy the pen with a stub and but a medium nib?

I honestly dont know. I see none marketed as replacements. Perhaps someone more knowledgeable can say if the mini (or others) will fit.

There is a whole thread devoted to this. I personally have the 1.1 stub, it's not close to that. My dad has some Pelikan mediums, and they are wider.

If you are interested in trying a stub, go with the Eco. My experience with TWSBI stubs in the Vac700r, 580, and Eco is that I like the Eco the best.
The Eco stub while labeled as 1.1 mm like the others, writes a slightly thinner ink line.
The Eco stub nibs come ready to write. I’ve had to “tweak” every one of the 580 and Vac700r nibs in order to get a nice smooth write. Eco, not so much. They write nice and smooth with a nice wet ink line with good line variation that suits my medium size writing.
I’ve been trying to re-learn to write cursive. The Eco stubs seem to give me more control over the ink flow and let me focus on my writing.
Good luck.

I have both, and love them ☺ The stub of the eco is awesome!
If you really can get only one, I'd go with the stub.

Thank you so much!
I have just bought a Lamy 1.1mm stub nib for my Safari. I'm going to try it for a week. Then if I feel like I can use it all the time, I'll buy the stub on the Eco.

For ECO's price tag, it's absolutely a wonderful piston filler. 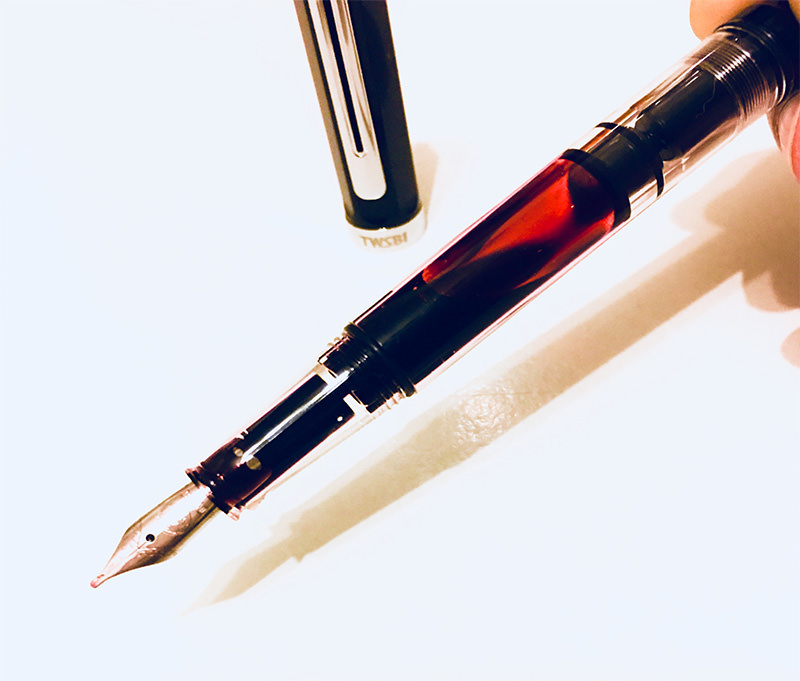 For ECO's price tag, it's absolutely a wonderful piston filler.

My default favorite nibs, from the days of yore yea unto the current offerings of various nibsmiths.

I *love* the ECO's 1.1 stub, on both my blue ECO-T and Transparent Blue ECO. For some reason, the combination just really works for me, moreso than a 1.1 Stub on a Diamond AL Mini. (For all I know it's the same nib, but the pens' presentation/balance feel are different, affecting my perception of the nib; I prefer the ECOs.)

I personally have just realized that stub nibs are not to my taste. I find they just don't make my small, shallow spencerian cursive look good, and I don't print often enough to really take advantage of the line variation. So for everyday writing, I prefer a standard nib and avoid broader stubs (the 0.6 and 0.8 stubs nemosine makes are an exception for me) like the plague.

If you are a primarily print writer, get a stub. stubs and print go together so, so well. All print looks better in a stub.

I used a 1000 grit diamond stone I have for my woodworking tools, some fine sand paper, and finally the Revell 12000 pad--which no fountain pen owner should be without.

The Nemosine: whatever the harder bit at the end was? well, it's gone. I like the nib a lot. It's razor thin but wide. I have to occasionally polish it up a bit with the Revell pad because it can become scratchy and you can cut paper with it if you try. I've sharpened and shaped a lot of tools and I've got a few Nemosines around, but still it was a bit reckless. In the end it wasn't that hard to do and it seems to work great. (I've got hundreds of pages of A4 to prove it).

The Mini was another leap into the dark, but I like how it came out too.

And then I bought an Eco with a 1.1mm stub to grind it too....but I liked the stub so much I've just kept it.

My handwriting is pretty bad (though my girlfriend says it's actually pretty good.) I first tried getting finer and finer nibs...but the stubs and the italics actually helped a lot more.

One thing I think I can say from my experience,  is that many of us will seek line variation by getting a flex nib. Unless you intend to slow waaayyy down, you won't get much line variation but that springy nib is a lot of fun. Real line variation while writing normally will come from a stub nib or an italic. That's my experience; if anyone disagrees... well, they're probably right.

Also tagged with one or more of these keywords: twsbi, stub, nib, medium nib, twsbi eco