I'm in the market for one and would like to learn more about what I should look for.

No resident office holders at FPN.

That's too bad. FPN should hold an election or hire one.

I would vote for you.

Seems a need to consult Doctor Nostradamus the Soothsayer and or Les Propheties.........

...people  yak it ti yak a streak and waste your time of day but

Well, I know the pen was generally built in maybe the 30s and 40s and over those years, changes in small details and materials were made. I'm curious if there are pens from particular years or of particular styles I should focus on or avoid. Perhaps certain ones make better "starter" Vacumatics over others or maybe there was a year or two they were known to employ a cheap part somewhere that makes for an otherwise bad Vacumatic.

I would vote for you.

You'd also be sorely disappointed in the quality of my representation.

Your first choice would have to be a Parker Vacuumatic, Duofolds, or P-51.
We all have our favorites, but I find these to be the most robust. Parts and repair specialists are still available.
Get yourself into our archives. Do your homework, go to Ebay and get a feel for pricing. Then you will be ready to make the leap to a pen most close to your liking.
Best of luck. Happy writing

The Vacumatic book is a good place to start.  You'll learn the history, and how to identify the different models.  Granted there are some variations in the models, but the quality and materials were fairly consistent over the 15 or so years that they were made.   I  personally don't like the pens with the plastic thread bushing because they can be difficult to remove, but they're still good pens.

The early pens had lock down fillers, the middle ones had what we call "Speedline" fillers, later ones the "disposable" fillers which were also used in the Parker 51.

I wouldn't avoid the pens with lock down or Speedline fillers.  I actually prefer the first generation pens that have the lock down fillers  because they are a bit fatter and have fatter sections, so I find them to be more comfortable.  Just inspect the fillers carefully.  Look for corrosion on the metal of the tube along the slits, make sure that the notches aren't worn and that the filler locks down and stays in place.  Look for corrosion on the tube of the Speedline filler too.    They can be replaced, but they aren't cheap.

The most cost-effective point of entry in Vacumatic Land is the so-called 3rd Generation.  The 3rd Generation is easily identifiable by the lack of a rear jewel.  The blind cap end of the pen is rounded.  These typically can be found cheaper than the earlier equivalents.  Aim for a Junior or Major.  They are the best mix of size/price.  There's nothing really to watch for except plastic shrinkage which can happen on the caps near the top and on the barrel near the blind cap seam.  They all used generally the same quality material over the 15+ year production run.  The Canadian Vacumatics that were made in the 50s typically were a little bit lower quality, but those are kind of tough to find anyway.

There are 4 common sizes of 3rd Generation Vacumatics (though there are 6 in total).

(Not pictured) "Long" Major (uncommon) - Same as the normal Major, except longer (only made for a few months in 1942) 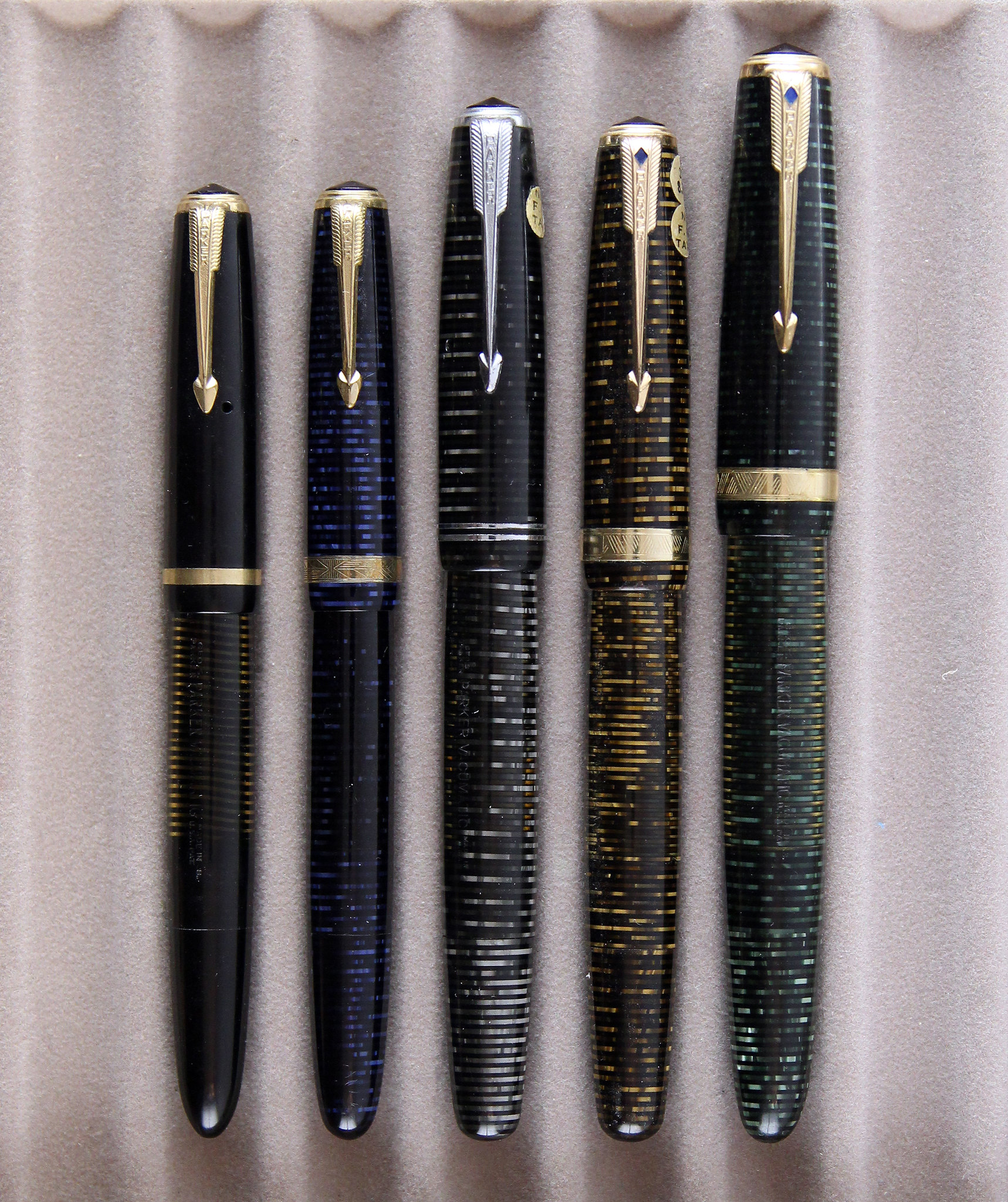 Also tagged with one or more of these keywords: parker, vacumatic