I've been meaning to write up a quick review of my favorite gray ink: Pilot Iroshizuku Fuyu-Syogun, and here it is, finally. 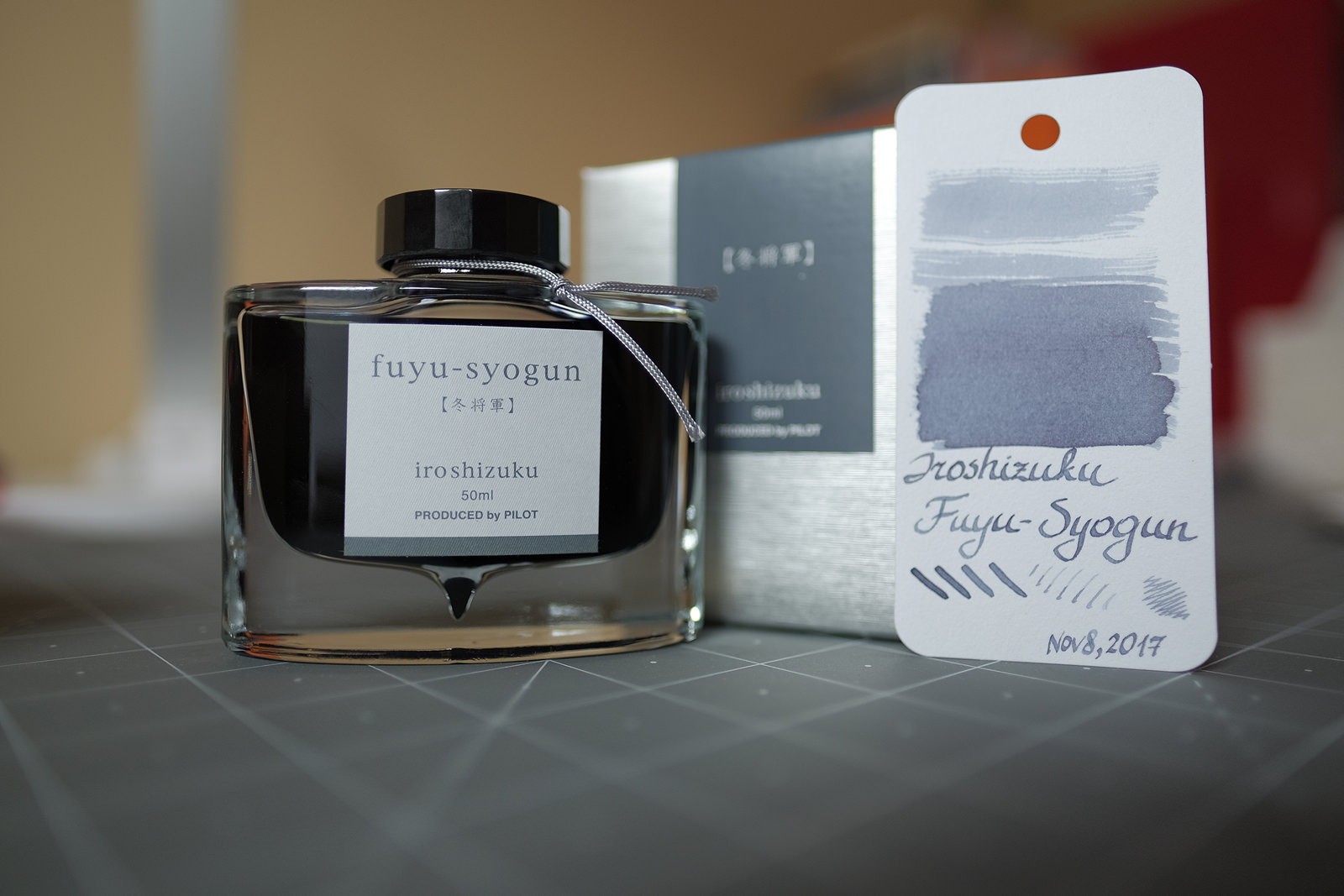 Fuyu-Syogun was not a love at first sight/write.  No, in fact I thought it was just too pale, bland, and boring.  Only after I kept going back to my sample periodically for sketching and doodling did I fall in love with it.  And I can't get enough of this ink now, so I got a full bottle.  On the photograph below, you can see my less-than-enthusiastic thoughts about this ink in the older writing in the notebook underneath.   I don't have a lot of grays--only a few samples and a full bottle of Paper Plume's Oyster Grey (another great ink), but in Fuyu-Syogun I have found a gray that does not make me wish for any other of its family. 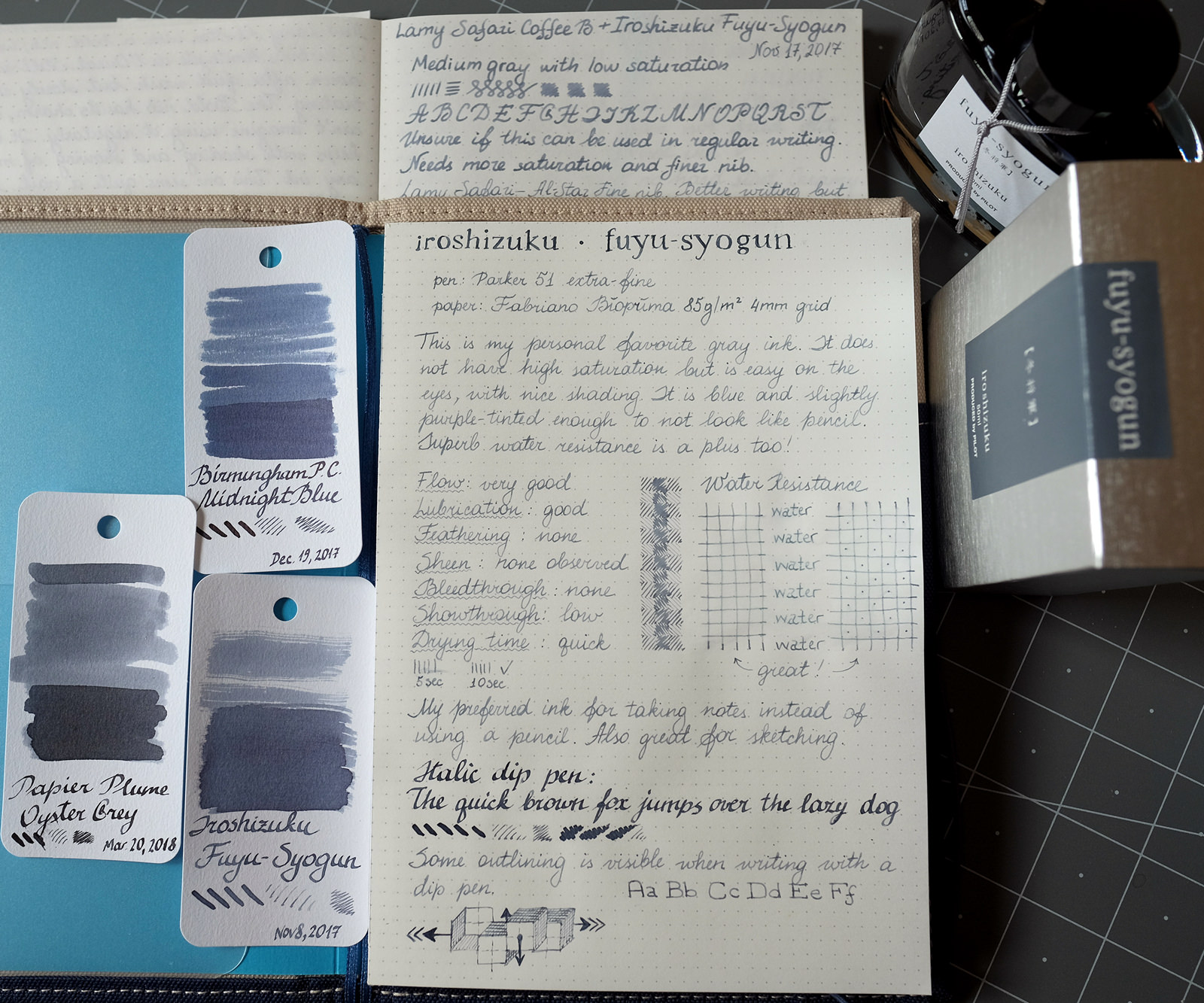 It behaves perfectly in any pen and on most papers, even cheap absorbent kind (as long as you use a conservative fine nib on the worst paper).  Easy to wash out of a pen, great flow, no problems!  It has excellent water resistance.  The hue is clearly legible and does not look like pencil writing due to the prominent blue-lavender tint, however it has a familiar kind of appearance for those who've taken a lot of pencil notes in the past, only with better shading and longevity. 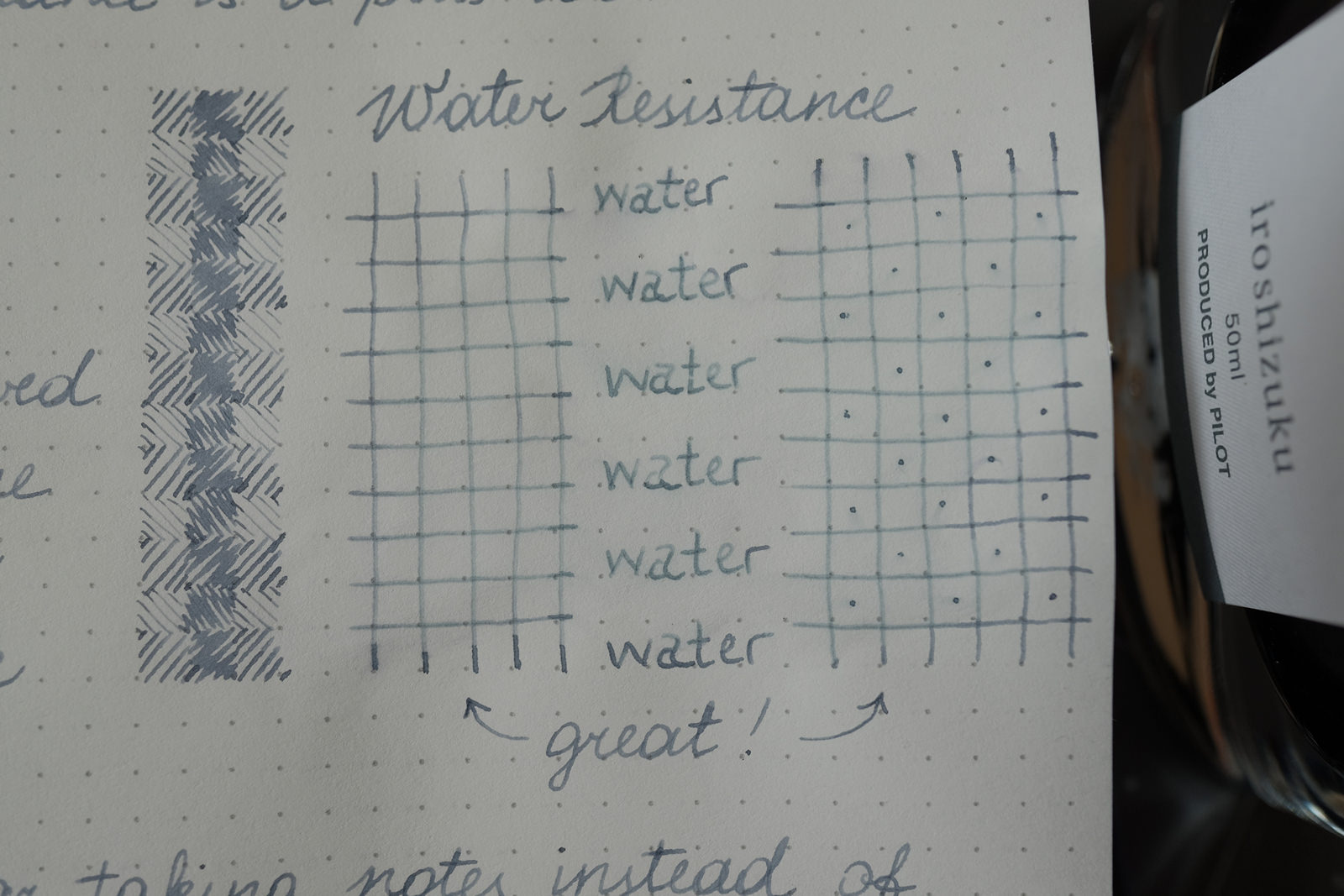 Due to this gray not being a pure gray but rather having a slight tint (I think lavender-blue is the closest description I can think of), the appearance of the ink changes based on the paper you use it with.  For instance, on more bright, clean white paper, like Col-o-Ring cardstock rectangles, you see the pure color of this ink.  On white Tomoe River (which is actually quite creamy and not pure white), the hue is warmer, and the lavender is less prominent.  On Fabriano Bioprima 85g/m2, which is a pale cream, more creamy than Tomoe River White, the ink is more toward dirty bluish hue. 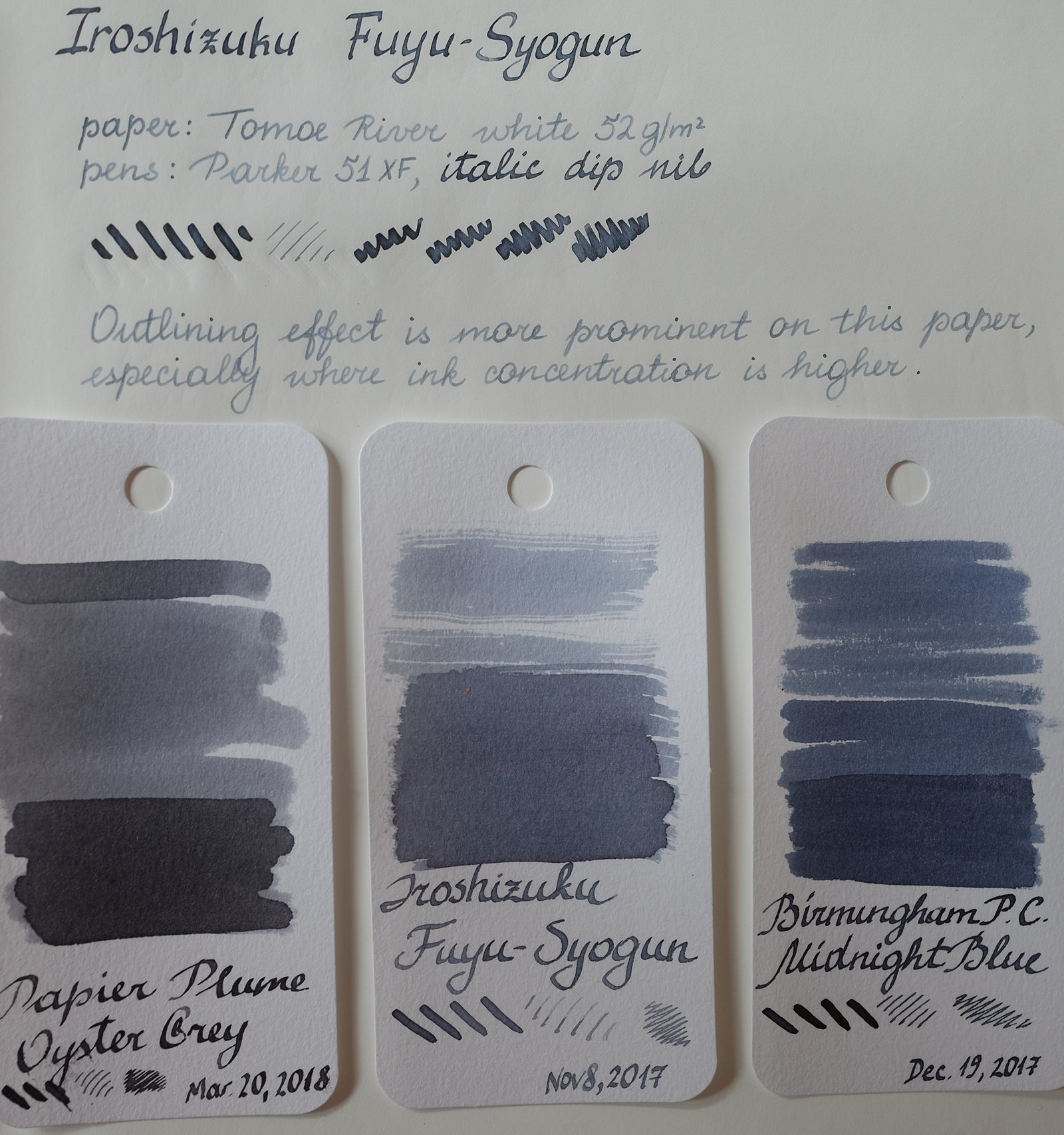 I've added a sample card of Birmingham Pen Co.'s "Midnight Blue".  It's not the same (higher saturation of blue in that one), but it from a similar family of colors.  I did not photograph it, but Montblanc's old formula IG "Midnight Blue" is similar in hue to Fuyu-Syogun once dried and aged a bit, but is significantly darker.

One of the properties of this ink I like a lot is the "outlining" (also sometimes called "halo-ing") effect when written with a juicy enough nib or on low-absorbency paper: 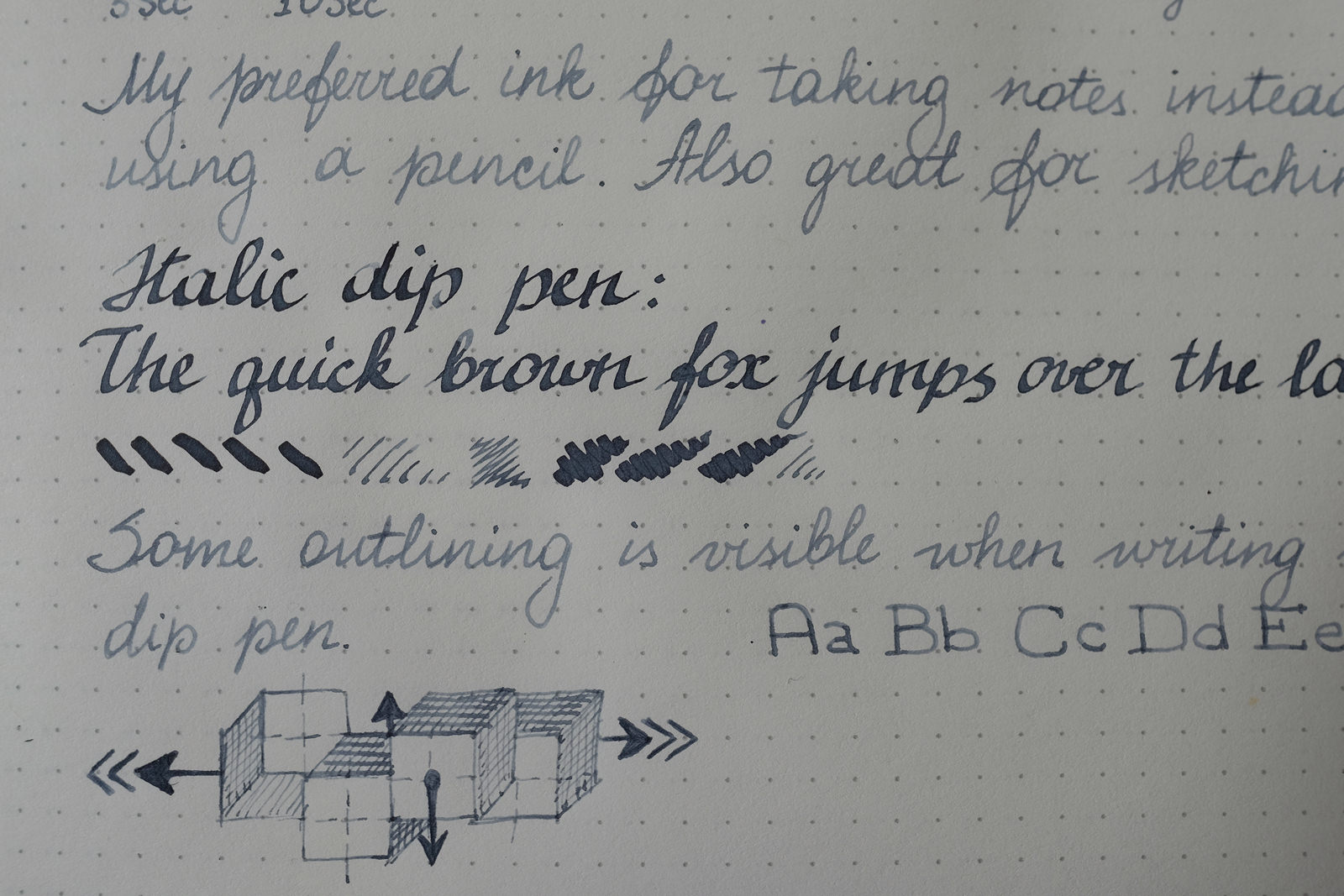 Nice one, thank you!

I never seem to select a grey ink to fill a pen with though.

Mini Review? Seems like a full review to me. Great Job! I'm just not sure I like grey inks... If I wanted grey I'd use a pencil. But this one seems unique enough to not be a total bore!

Thank you for this intriguing review.   I have always assumed this ink would be too pale to read in a fine nib, but now I think I need a sample.

Gorgeous review, gorgeous handwriting. I love the comparisons! Is the Birmingham blue dry or wet? And do you consider Fuyu-Syogun a dryish ink?

Fuyu-Syogun is a pretty color (and a complex ink, in that it has a *pink* component as part of its chromatography).  But I found it too light to be really legible on the page, and it was also a bit drippy (which is how I know about the pink component...

Gorgeous review, gorgeous handwriting. I love the comparisons! Is the Birmingham blue dry or wet? And do you consider Fuyu-Syogun a dryish ink?

From what I've read about Iroshizuku inks in general (and what I've experienced myself), they are very lubricating and far from dry.  They have very good flow.  Their saturation might not be high for all colors (certainly my Ina-Ho and Fuyu-Syogun are more "translucent" inks that have great shading potential to deeper hue with a high flow pen), but their behavior in a pen and on paper is great.

To be honest, I have only made that swab of the Birmingham Midnight Blue for my future reference and have not actually filled up a pen with it yet, as it's not usually a color I go for (it's very somber and business-like).  It was an accidental addition to my ink order--I meant to add a different blue.  I'll do a fill with it soon and will report back.

Thanks for the review.  Possibly my very most favourite grey ink. Iroshi's own nickname (I think) of "Old Man Winter" fits fine IMO but even better is that once used about 10 years ago here by another FPN member (sorry, I forget who) where it was described as the colour of the sky up north in Canada shortly before a snow storm. Excellent review!  I do not have this one yet, but it looks as though I need to get it.

Excellent review of a great ink. This review reminds me to ink up a pen with it - it’s been a while...

Great review of a great ink. Thanks.

Great review. Since another FPNer gave me a sample of this ink a few weeks ago I have been desperate to get some. It is such a beautiful, pure grey.

Wonderful review of, to me, an almost unusable ink. I couldn't easily read it no matter what pen I put it in

I do enjoy seeing it in people's posts though. Thank you.

What a great review! This is the color of the sky when what we in Texas call a "Blue Norther" is about to blow through. I'd like to try it with an italic or oblique nib.

Also tagged with one or more of these keywords: pilot, iroshizuku, fuyu-syogun, grey ink