Listed here on ebay is one labeled "SF E644" that otherwise appears to be a black Eternal 46 lever filler.

Maybe someone with a better knowledge of MT history can fill us in of the different Eternal numbering. 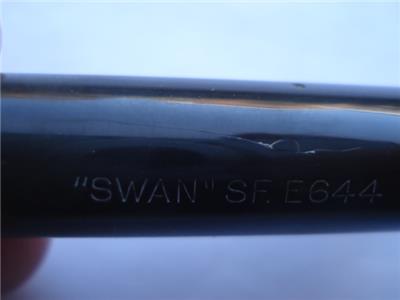 British numbering was 444, 644, and 844 for full size, 444b, 644b, and 844b for vest pocket size. I think the British Eternal are considerably more rare than the American Eternals. The British numbering should have the /## to denote color.

Did the British do eternal ringtops?

I found the SF in front of the E644 to be unusual.

Nothing to add really but here's an ebay listing of a SF E444 "Made in England" but with an American nib.

Aside from this I have owned only one Eternal; this was a clipless model with no model number stamped on it.  It was made of BHR and had a curious domed finial that appears to have been quite uncommon. This pen was marked Made in england and had an English Eternal nib.

Well I understand that!  But I found it odd that there was an SF attached to the Eternal numbering.

Cob's posting is interesting, because that pen has the bands of an Eternal, and the woodgrain top of an SF 130/230.  That pen deserved the SF and Eternal labeling!