A coworker came into my office yesterday.  She had entered a raffle to raise money for a friend, and she'd won a custom fountain pen!  Since I'm the biggest fountain pen lover in the office, she offered it to me for free.  And here's what a I got:

A custom pen from Mini Wood Productions (MWP).  It's based on their "Füller" series.

MWP is based in Conroe, Texas.  Their website says that their pens aren't "kit" but rather "create one at a time on a manual lathe."

What an interesting pen. The body is aluminum, but pretty thick (making for a heavy pen-- sorry that I don't have a small enough scale to accurately measure). On their regular Fuller pens, the section is aluminum too, but I think this one has a copper section.  The section is long -- about 23 mm -- with a couple of grooves near the top of the section for grip.  There's a serious step down from the body to the section, but because the section is so long, it's not noticeable when you hold the pen.

The cap, though, is acrylic -- listed as "alumilite" on the package I got.  The cap is gorgeous -- lovely green, red, orange swirls with flecks dancing and highlighting the pattern.  But it is super light compared to the body of the pen.  And it sits in stark contrast to the utilitarian look of the aluminum body and the aluminum finial. The cap has no band, but I guess it doesn't need one because of the contrast to the aluminum body. Almost like two different pens smooshed together. The cap doesn't post-- it's a few millimeters too small to do so. Finally, there's no clip, so the pen rolls were it wants (and the cap does too if you put it on your desk while you're writing).

This pen comes with a #6 EF from Edison.  It writes smooth and clean right out of the (cardboard) box. But the website indicates that the "standard" Fullers come with Jowo nibs.

I have to say, I've never seen a pen like this before.  I really dig the beautiful cap, and the body is not uncomfortable to write with (if you like heavier pens), but the juxtaposition of the two is just a little shocking, at least initially.

I'm so grateful to my colleague who gave me the pen, and I'll keep it inked with Birmingham Pen Honus Wagner Brown for a while -- it might be my editing pen.  And for anyone looking for a unique, customizable  pen, check out MWP. 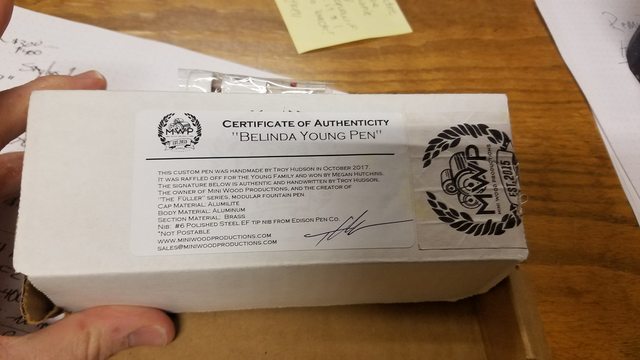 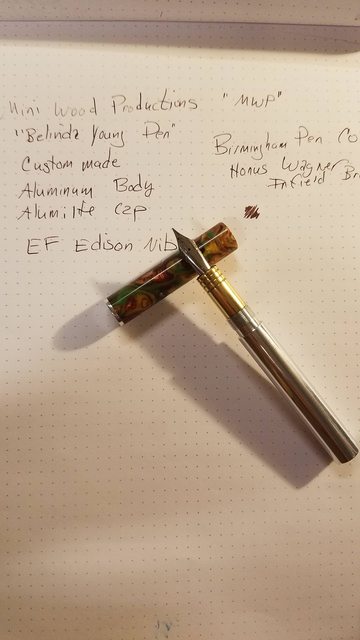 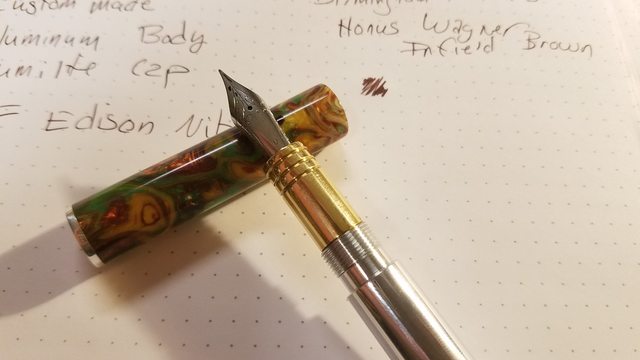 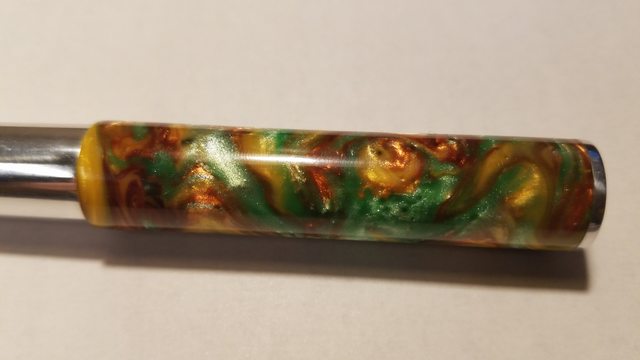 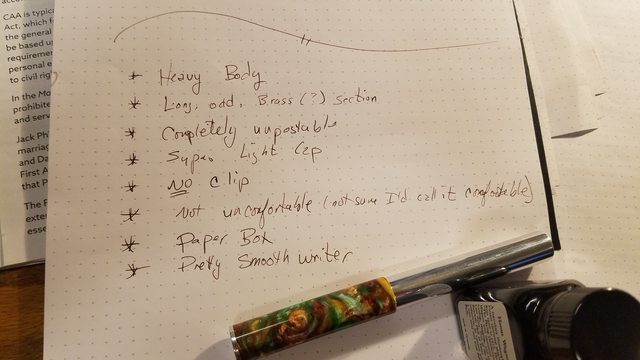 About $25 per hour plus materials and design effort is not unreasonable for a fountain pen that is individually made rather than mass produced.

Also tagged with one or more of these keywords: mwp, miniwoodproductions, texas, aluminum, acrylic, edison, clipless