One Of The Coolest Patterns Ever

36 replies to this topic

I have lately acquired this beautiful Sheffield pen that I assume is British. Has anyone any information about this pen and where it was made? And the barrel lit up very bright, so the area hardly looks dark at all, but the pattern is more easily seen

so then is the sheet rolled??? pattern tucked in so it appears condensed at the join?

What a beaut! Thanks for sharing your find, great job getting it looking great again!

The end is not a cap, and is continuous with the pattern. So this seems to be a solid piece that was turned on a lathe.

I can't think of an eloquent way to explain my thought, so bear with the discussion of brownies, and then soap, below.

While I am totally guessing, I think the material is made in, let's say, a "brownie tray" block (not a thin sheet, but a thick sheet), then cut into elongated square blanks, and then turned.   This COULD explain the pattern, such that the areas that are cut perpendicular to the block (the edges of the brownie) are dark. The pattern becomes broader where it is more parallel to the top and bottom of the brownie.  To make the pattern equal all the way around, I would think a think rolled sheet would be needed.  Instead the pattern is made to look good from the top and bottom, and the small remaining "edges" end up less pretty.

Or, rather than brownies - glycerin soap:

I am trying to get a good example of a glycerin soap pattern that might result in a similar 180 degree striping of "less pretty pattern" if made into a rod. 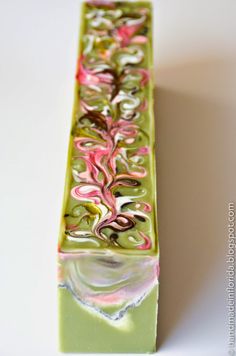 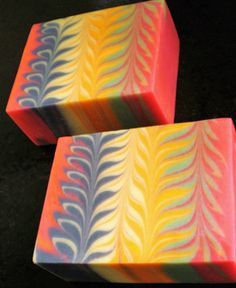 OR - I found a pen blank that I think also shows this.  from Exoticblanks.com, Kirinite

I'm also entirely guessing, since I know less than nothing about how patterns are formed in celluloid and casein etc., but  ................

do we think that the pale mop decoration within the blue and red, is formed in a similar way to the method used by craft people who make marbled papers, although I appreciate that with those papers the effect is purely on the surface.            To the base colour - either the blue or red - is added the mop colour in perhaps plain straight lines, and then a comb or wire tool is brushed through the lines of mop creating the almost floral/petal effect we see in the finished block of plastic.

Or perhaps not combed but pricked in some manner.

In Greenie's illustrations from Exoticblanks.com, some of the patterning penetrates the block completely - others appear not to go right through.

Because we're discussing a British product, how these special patterns were achieved perhaps found by inquiring through UK manufacture?

BBC won't permit a view HOTW Erinoid history on This side of the pond, http://www.bbc.co.uk...MT5a9ecQAnfJyKA

There's lots of early UK pride in modern manufacturing films, hopefully one on Erinoid patterns can be found.

Greenie explained the process similar to pressing and curing celluloid in sheets but up to a thickness of rod stock, then turned.

Not related to the beauty of these pens, I'm afraid... But it's nice to know they're there.

I have three MacNiven and Camerons, all original 1920s or earlier, with their original nibs. Two of them are two of my favourite writers; the J-nib and the MC. Both are really smooth with easy flex and good flow. The third is a Hindoo, which I'm still waiting for.

I've just missed three last week on eBay too, which was typical: like London buses... you wait around for ages then three come at once!

The last one I missed this morning - slept through a hairily early alarm... gutted! It had the Waverley nib too.

I'll post pics of mine tonight. They're nothing like as pretty as these, but good, functional, and classic forms.

I'll post pics of the two coloured ones I missed too, just so people get a better idea of what's out there.

just noticed another pair of those dark lines on a what looks to be a black lined pearl  'GOLDEN GUINEA 21/-' pen  -  not perhaps quite as dark as the earlier ones shown here, but looks to confirm the point that something was going on here, and perhaps a peculiarity of casein.    I have rubbed this one vigorously, and there is an complete absence of any celluloid smell.                         Unfortunately, I can't find anything in Steve Hull's book on the British pen industry with details of the GOLDEN GUINEA - but it's an attractive pen, in quite good nick, and still retains the paper wrap-round price band.

The Golden Guinea was one of Mentmore's upper tier products, along with The Spot

I must admit I have no idea where I picked that nugget up from. Probably from WES or the font himself, or it might even have been Debs.

1930's to the 1940's would be my dating too. From memory they were nice bling but not underpinned by much quality!

Wow! I have an eyedropper in 'blue mop', and it has exactlythose dark lines along the sides. I always thought it was deterioration - wondered if someone had left the pen in a box with a slot letting light in, or something like that - and now I know it's a feature of the material.

Many thanks for starting this post as there is so little to be found about these lovely pens. I picked one up in a job lot for next to nothing and they are lovely pens. Interestingly mine is a Series J5, with a M&C nib, but not the typical Waverley looking type, with a nice little bit of flex; together with the box (a little tatty) and the Instructions for their 'World Famed' nibs, and showing Cob's quote. Too bad most of the FPN folks won't look in this forum to see this. Their loss!

Macniven & Cameron, Made in Great Britain, Waverly Series No P 5

This is a casein pen (based on smell while I sanded it down to restore the color and finish).  Small pen, 4 1/2 inches capped, posts to a nice usable 5  5/8 size.  It came to me in a sorry state with a bent nib, barrel thread crack (now sleeved internally), and very dark, brown and crackly on the surface.

I was just so drawn to the pattern I had to buy it and put in some work to restore it!

Unfortunately, I know nothing about the brand, history, or other models they might have produced. a real cracker  - on the screen it looks to be something like mop against an almost lapis blue.        don't know whether this pattern has a name  -  those radiating arms have something of a floral/petal look, and it made me think of Japanese chrysanthemum - or perhaps a sun-ray look.

Earlier this year I bought a pen with similar patterning - but nowhere near as striking  ...........   the seller said it was a British Platignum, but I had my doubts - though looking through the Marshall & Oldfield repair manual there is a Platignum Visi-Ink which does look to be the same pattern as mine  -  page 187 (third edition).           Perhaps this was where my seller had got his information, and maybe he is correct, though my pen is only a b.f. and not a VISI-INK.              All that I can read on my barrel is MADE IN ENGLAND, and the nib just says WARANTED 1ST QUALITY.

I've rubbed my pen in the hope the genie might appear, but didn't get that addictive celluloid pong  -  so assume mine is casein too.

Anyway, congrats on one of the most attractive pens I've seen for a while.

both style are stunner

What a fantastic pattern. Don't know if I've seen anything like this before.

Many thanks for starting this post as there is so little to be found about these lovely pens. I picked one up in a job lot for next to nothing and they are lovely pens. Interestingly mine is a Series J5, with a M&C nib, but not the typical Waverley looking type, with a nice little bit of flex; together with the box (a little tatty) and the Instructions for their 'World Famed' nibs, and showing Cob's quote.

Sooo jealous of all the lovely MacN n Cs on this thread... And of this one too. I have the same nib, and dare I say it, even a little more flexible. Does it have a date anywhere on that literature/box? If you ever want to part with it...!

My Cameron No 74 BCHR lever filler Hindoo finally arrived, and it's super flexy. I'm waiting on a sac order for it, then I'll post it up on another thread.

Here's a Macniven & Cameron Ltd Waverley Series No 5 barrel with an M&C Ltd B'ham (so Birmingham) ENG. (so England) 14ct solid gold nib. Unfortunately the pen has no cap, so I will be selling it in the usual place later today. The history of this Scottish company is something that all pen men should read at some point. Also tagged with one or more of these keywords: macniven, cameron, waverly, casein