65 replies to this topic

Thank you once more for your extremely insightful comments that helped me tremendously to figure out what bothered me.

First of all, you certainly know why I aimed for those diagonal lines in the composition. Pens have a rather unfortunate shape for pictures and it's tricky to avoid boring compositions. The dark corners bothered me, indeed, but again I stopped short of changing this. I think I found a solution that's a good compromise. I added a white background so that the still visible corners aren't that distracting anymore. I'm curious what you think about this.

Second, I think I managed to improve the modelling of the clip quite a bit. I removed the white reflector card attached to the lens because that shed a rather flat light on the clip. Instead, I used a small fill card at the bottom adjusted such that the clip gets a nice "glow" and a dark contour bringing out it's shape better. Of course, this also changes the reflection on the barrel but I thinks that's acceptable. I controlled this reflection on the barrel using a polarizing filter on the lens. I think that's the best the lighting so far.

Remains one of my biggest pains, the post processing. I think I'm still way better in the darkroom than in digital processing. One reason may be that in contrast to my darkroom I have no really professional equipment for the digital post processing, no calibrated screen, no controlled environment light, no professional software and so on (plus much less experience). Another reason may be that most of the time I used camera jpeg files as a starting point and then adjusted curves, colour balance, contrast, lightness, saturation, size, sharpening etc. You inspired me to develop the raw files myself and I think this allows me indeed to get more out of the same take. I will need much more practice before I fully feel at ease with that, though.

Long story short, here are my latest attempts. First my final version as described above: 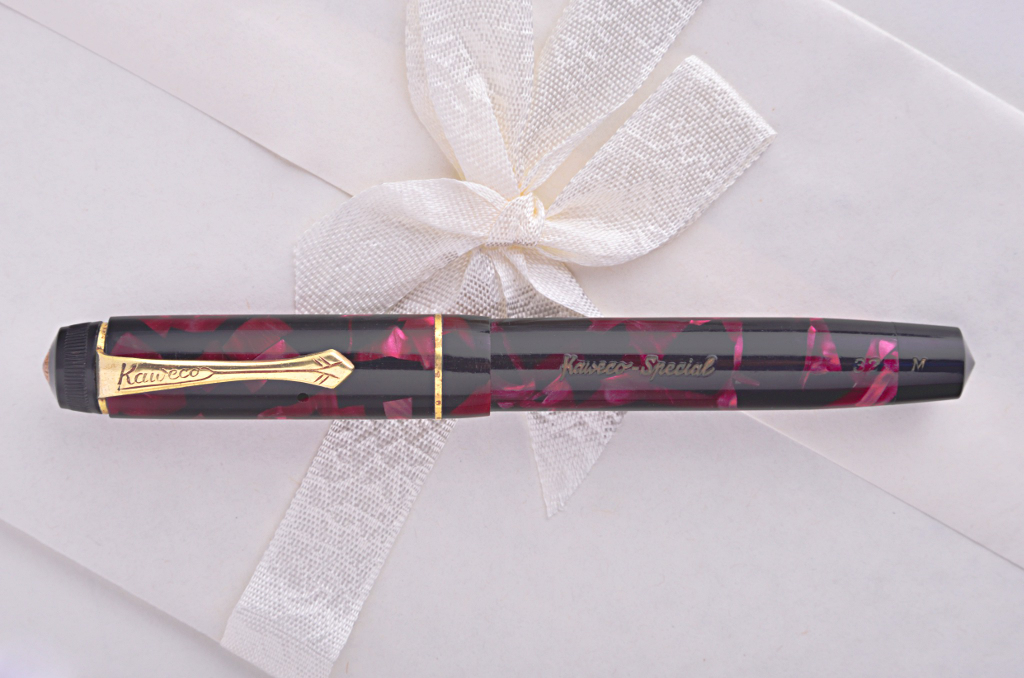 I like almost every thing better in this picture than in the previous attempts. BUT, now the light on the barrel imprint suffered and became dull. The imprint previously got its brilliance from the camera fill card which I removed in this shot.

So, I add another photo where I still used the camera fill card and tried the get a more plastic lighting on the clip by using two small black cards left and below the pen: 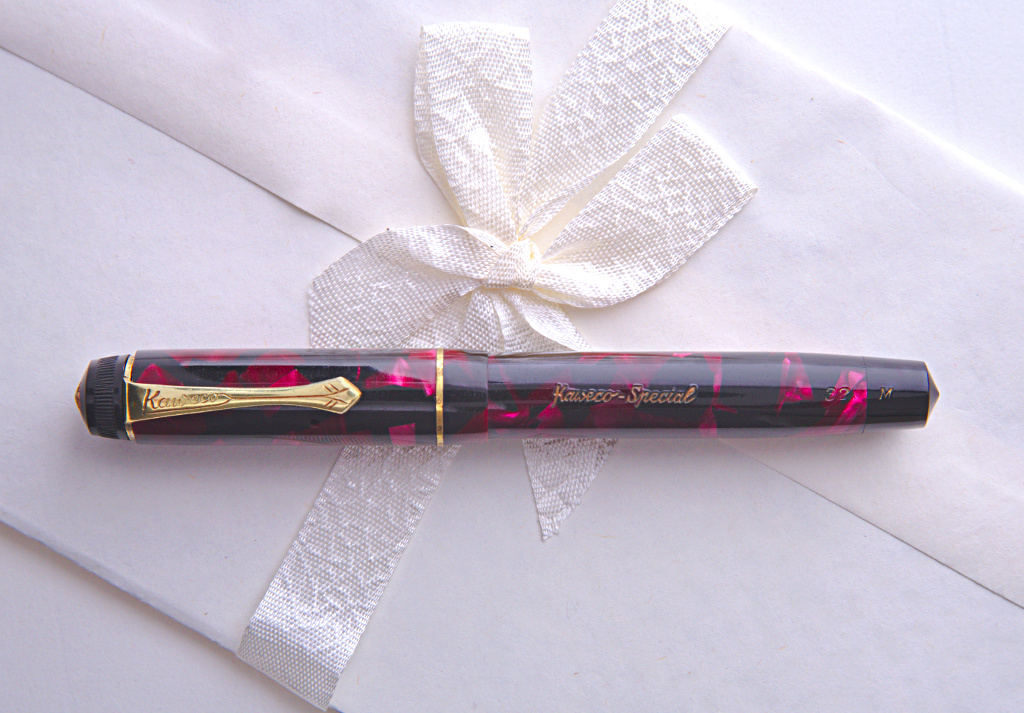 Note that I used two different programs for the raw development, which is visible in the white balance. If these two were the best I could come up with, it probably would be a matter of taste what's more important the barrel imprint or the clip. In my latest lighting pattern the clip becomes fairly bright and prominent. I wonder if I should burn in the clip a little bit to get a better balance.

Finally, I could try to combine the lighting ideas and add a small fill card from the top that's just large enough and positioned such that the barrel imprint is getting better brilliance. However, I'm not sure if this is possible and it's getting fairly involved by now. So, any comments are highly welcome.

OK, I think I finally arrived at something that I'm really quite satisfied with: 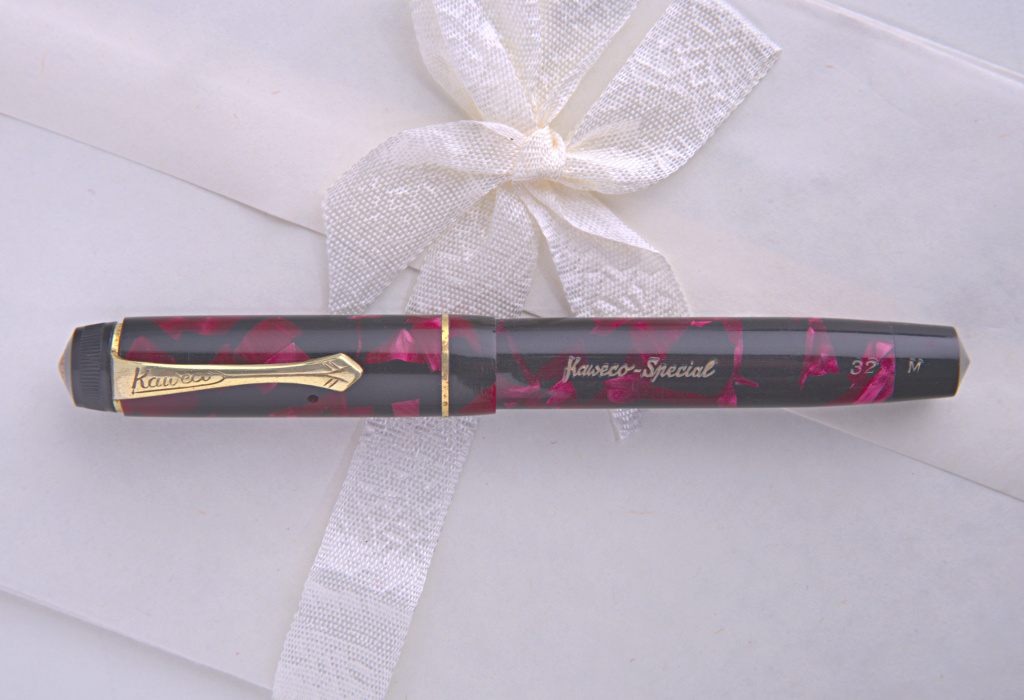 I made a slight compromise modelling the clip and significantly enhanced the lighting of the imprint (at least I think so). The solution was probably a little off the beaten track. I just used a medium sized "V-flat" (as you call it) below and left, no additional fill cards. Then I set up a second strobe fitted with tube and fine grid (10°) to the right and aligned along the barrel of the pen. I set the output of that strobe to about 0.3 EV below the value I wanted for the imprint. I put an adjustable slit between tube and pen to block the direct light from all areas except the barrel. I actually used a Sinar adjustable matte box mask for that purpose, which worked very well. The final tweaks were done in the post processing.

So, I'm curious what you think of this one.

All three of your most recent shots are greatly improved. What might seem like minor tweaks to the average viewer add up to a much more pleasing image.

If you're lacking software and don't want to invest, you should try something like GIMP (GNU Image Manipulation Program), which is a popular freeware alternative to Photoshop. As you mention, dodging and burning details is also an option, as is adding local contrast, curves, etc, as long as you have a tool to do that.

Since you're working with RAW files, I imagine you might be able to make global adjustments with that software. The only real suggestion I have for your current image would be to compress the histogram a bit, just by sliding the right (white) slider a bit to the left, and slide the left (black) slider a bit to the right, to add a little contrast, which will remove the haze that is expected with RAW files. A slightly more refined way to do the same thing would be to add a slight "S" to the curve (just Google "S curve Photoshop" for a better understanding). And a slightly rougher way would be to just add contrast with a contrast slider in whatever application you're using. RAW files nearly always have a it of haze on them, but will pop better with these types of adjustments. JPG are compressed and somewhat processed, so you don't tend to notice that as much.

You went quite a ways to construct lighting modifiers for your compromise between the two prior images. Traditionally, this type of laborious work was required often in studios all over, which is one of the reasons a smaller portion of the pollution aspired to pursue photography. I will do similar things when I'm trying to get it all doe in one shot, but often I'll also resort to another, more modern technique - composting the best elements from each frame digitally. Whether you want to do that, in my opinion, depends on whether the image is about the photography or the pen. For my own art, I tend to make it about the photography and take pretty traditional routes to minimize post-production, but shooting for clients, who really don't care either way, I'll shoot a series of "plates" for a final composite. Often elements of both techniques enter the process.

Sorry for my delayed reply, been busy and hadn't realized you posted again, but I'm glad to think I was a little bit of help.

Any questions, just ask, of course.

Simulacrum, I somehow just noticed your post. Thank you for your kind words. I'm glad you've found the information useful.

This whole thread started because I lost my trusty pen after having it my pocket for over two decades. I'm now happy to report that it is has returned to me!!

I'll continue to contribute to this thread as long as it's helpful to FPN members. This is the most positive and civil forum I have ever seen on the internet and I appreciate being welcomed into it.

Great news about your Pen!  I just noticed your icon is a wanted poster (presumably for your previoiusly lost pen!). Funny I didn't notice it until after you found your pen.  Will there be a photo shoot for your newfound old pen ?

Thanks! I guess I should change that avatar... yes, I'm planning to shoot the pen, do a proper portrait and some more more technical images for reference. Too many other tasks ahead of that in the queue to know when though.

Back to Pictures & Pen Photography