A while ago I won a giveaway that was hosted for a Waldmann Pocket fountain pen. The giveaway asked folks to not only request a chance to win, but to also post the reasons why they felt that they needed the pen. I have to admit that I almost walked away from the competition without having even tried.  I didn't really have any good reasons for why I NEEDED the pen, but I was quite taken with the little guy, so I decided to try something just a little bit different.

I am a professional story teller (yes, I know that my grammar leaves something to be desired, but that's what writing resources, advanced word processing programs, and editors are for).  Most often the stories that I am able to tell are nonfiction, but every once in a while I get to tell folks a story that originates from my imagination rather than from real life.  I'm always happiest when I am writing something imaginary, but family life, deadlines, and general laziness really eat into the amount of time that I can dedicate to something that will not result in a pay check.  After browsing several times through the entries for the aforementioned giveaway, my longing to create some fiction bit me in the face and would not let go.  I bribed my 6 year old daughter with animated princesses on Netflix, put my 2 month old son in his chair and rocked him with one foot, while using the remainder of my resources to quickly create a story worthy of a fountain pen (time is a factor when trying to do something that does not involve being a clown for your small children).

When creating a story for a forum post there are two factors that you must employ: brevity and sneakiness.  The story must be brief (or else people will not read it), and it must not at first appear to be a story.  For whatever reason stories tend to get ignored or overlooked in forums, so it is best to draw the reader in before they realize that they are reading a story and not some helpful hint, tip, or anecdote.  These factors combined with a time constraint (and my son's sudden burst of crying as I began the very start of my editing process) resulted in a less than polished piece of fiction.  In spite of its many faults my entry was unique and interesting enough to get an immediate positive reaction.  The other folks involved liked it, the host liked it, and as a result I was awarded the pen.

Now that you have the backstory, and without further ado here is my review of the Waldmann Pocket fountain pen:

Yesterday a package arrived on my doorstep. This package was sent to me all the way from Portugal, but as the tracking for it did not transfer over to the USPS, I was not really sure when it would arrive.  Needless to say, I was quite surprised when the postal worker had me sign for it.  Inside of this unassuming brown wrapping was my eagerly awaited Waldmann Pocket fountain pen!  I have been playing with this little pen pretty much non-stop since that point, and now have some initial impressions to impart. For those of you who do not know, Waldmann is a company that is virtually unheard of over here in the United States.  I was quite curious to learn more about this company, so I did some research while waiting for the pen to arrive. There wasn't much information available, but from what little I have learned, the pens are really only sold in jewelry stores, executive gift stores, and a few high end pen shops. Add to this the fact that Waldmann pens are made of sterling silver, and you have a bunch of fairly expensive pens that are mostly bought to look nice in a breast pocket, and are only used when something needs to be signed. This is entirely too bad, and is a fate that no pen should have to suffer. The few reviews that I could find of Waldmann pens, and my limited experience with the brand show me that Waldmann pens are well made, nice looking pens that should receive way more exposure than they currently enjoy.

I rarely care about pen boxes, but the Waldmann Pocket fountain pen came in the most amazing pen box that it has ever been my pleasure to open. The box is incredibly sturdy, made of padded leather and silver, and it smells and feels wonderful. It has a nice amount of heft to it and opens and closes with a genuine feel of security.  The pen is absolutely dwarfed by the box, but it’s such a cool box!  Inside, besides the pen is a polishing cloth, several cartridges, and a warranty card. 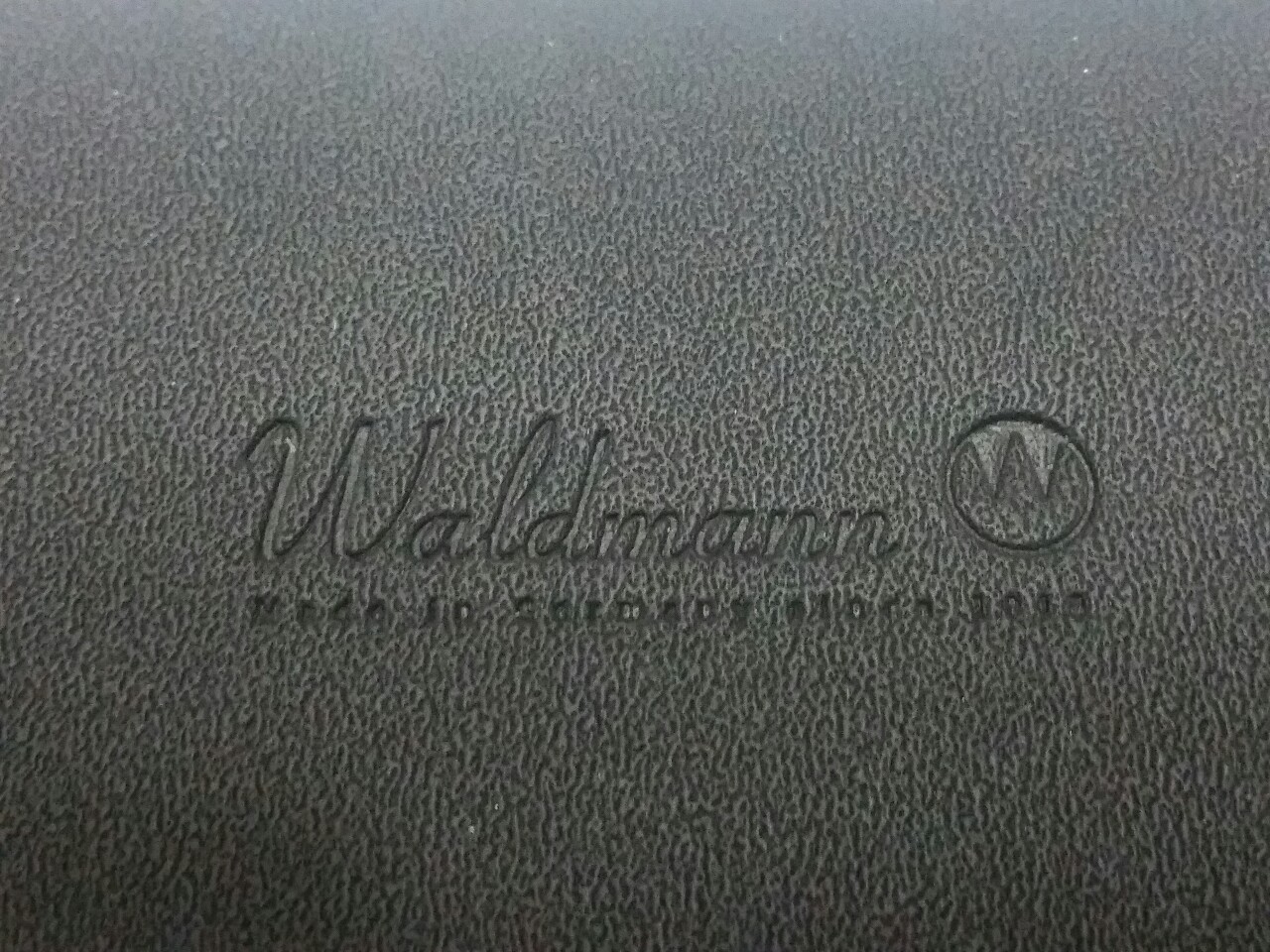 The pen itself is very similar in size to an Esterbrook SJ, but with a bit more length and quite a bit more heft. The sterling silver makes this a somewhat heavy pen, but not uncomfortably so. The body of the pen consists of a barrel coated in black lacquer with a silver end cap and a silver section. The nib is an 18k two tone F nib with Waldmann’s symbol and the year 1918 (the founding year) engraved on it. Everything that I have read, as well as the appearance lead me to believe that these nibs are provided by Schmidt.  Schmidt is a distributor and not a producer of nibs, so I could not even begin to guess as to who actually made this nib. The cap is silver with raised pin striping, a Waldmann symbol on the clip, and a spot where an engraving can go. The cap is a click cap that has a sort of double click which secures it in place extremely well. The cap posts fairly deeply and securely with no hint of a wobble.  The clip is springy and solid. The Pocket pen is not compatible with a Monteverde mini converter, and although a Kaweco squeeze converter will fit onto the nipple the metal ring on the converter does not allow it to seat properly into the section. I may try one of the new Kaweco mini piston converters, but for now it’s international cartridges for me.  This is no big deal as I have a bunch just sitting around, and I also have an ink syringe that I can use to refill them.

The nib is a true European fine and is springy enough to allow for some excellent line variation. I wouldn’t use it for flex writing as this would likely push the elasticity of the nib too far, but it lets me do some expressive writing when the mood strikes. This is not the smoothest nib that I have ever used, but it’s not really scratchy either. I would say that it is fairly similar in performance to a Platinum 3776 soft medium nib. I am transitioning from using cursive italic as my standard handwriting to using Spencerian Business script, so this pen is perfect for my current situation. Writing with the Pocket pen is a nice experience. The size when posted is perfect for me and the weight lets me know that I have something substantial without causing any stress. The pen is thin, but I like thin pens, so it works out quite well. The Waldmann Pocket is very similar in size to the Esterbrook SJ, a pen that I have been using quite a bit lately, so it works very well for me.  I could see some folks having an issue with its thin section, but I like it quite a bit.  The section IS a little slippery, but the flair at the end keeps it from being too big of an issue. 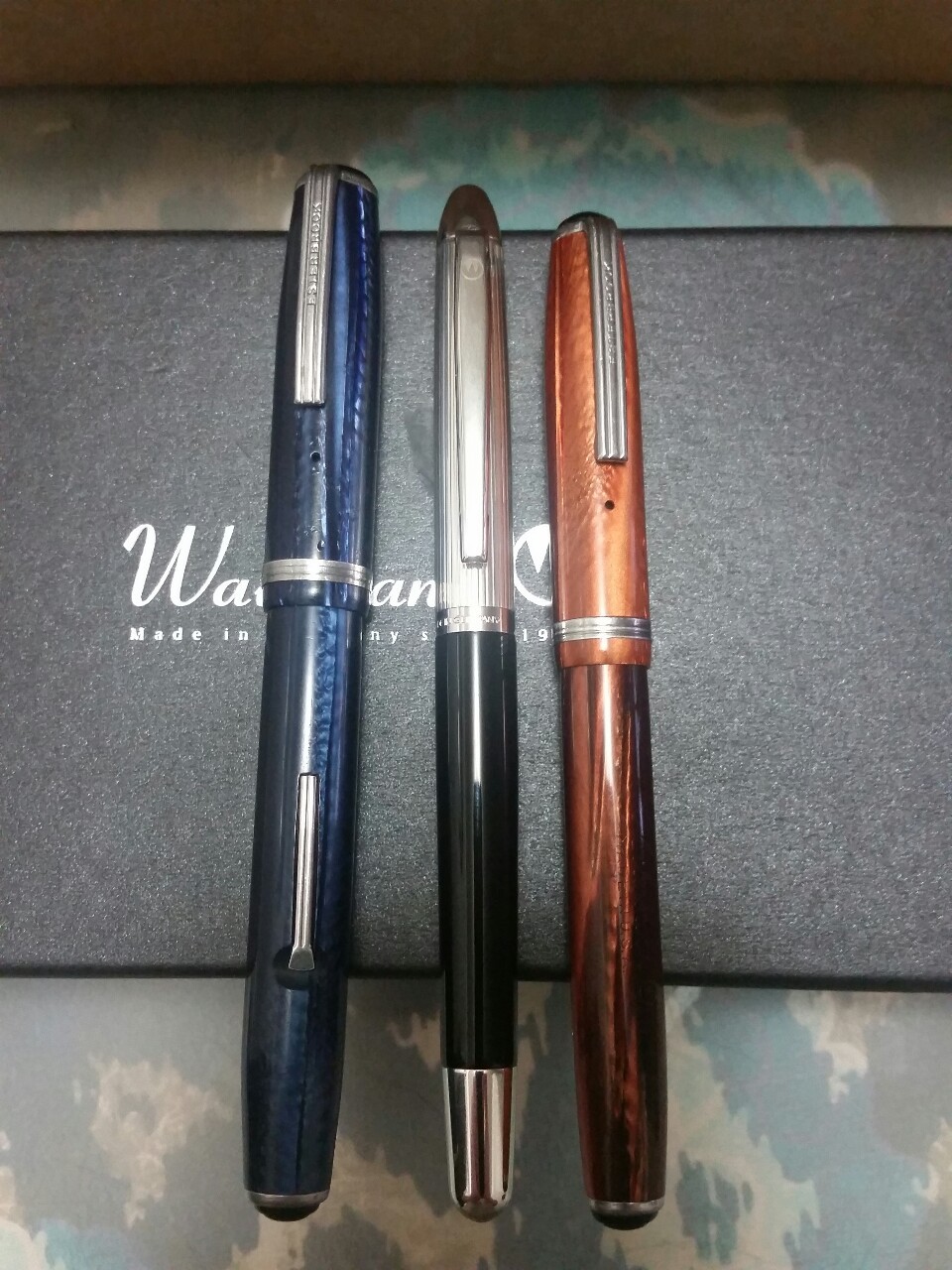 As I stated earlier, Waldmann pens tend to be sold as jewelry rather than as usable writing tools.  This fact combined with the materials used to create the pens, and the customer base that is being targeted make for an expensive line of pens.  The gold nib version of the Waldmann Pocket sells for anywhere from $300 to $400 (partially depending on whether the nib is 14k or 18k).  At about $150 to $200, the steel nib version is a bit less expensive, but still not cheap.  These prices are far higher than I feel this pen is worth, but I understand that sterling silver pens are not cheap and that the price also reflects what their customers are willing to pay.  I have heard of folks finding Waldmann pens on eBay or on sale in store for reasonable prices, but I was not able to find good examples of this.  With all of that said, I would never pay the list prices for this pen (to be honest, I would have a hard time justifying paying $400 for ANY pen).  Luckily for me, I got this one for free.

All in all, I am happy with the pen and plan to use it pretty extensively. It is the perfect size and weight for my particular writing style, the nib is nice and flexible, and overall it just looks really nice.  I'm happy to have won this pen, and I look forward to a long and fruitful writing relationship with it.

Excellent and exhaustive review. I have Waldmann Xetra - it's nice pen and the box looks impressive indeed.

Ages ago I bought this Waldmann Tango at my pen dealer's. Barrel and cap are sterling silver. The nib is a large-size stainless steel by Schmidt, with iridium coating. The grip is chrome. The pen fills via a built-in piston.

These truly wretched photos don't show it off well at all. The second shows the Tango next to my Waterman Man 200 sitting on some Shakespeare.

The Waldmann performs no less well than the best of my German pens, the nib producing a well-shaded, quite wet, bold line.

No man is a slave unless he is willing to be bought by another. (EP)