One of my initial reviews@fpn was of the FCD Ambition. I took this pen out today to give it a deeper look, after gaining relatively more experience with Faber Castell line of pens. Here is a link to my review on blogger:

So here goes a detailed review.

Long ago during school days, I had used some of the not so expensive Faber-Castell ballpoints, pencils, highlighters, rulers, mechanical pencils and geometry sets. They used to be a bit scarce in India then, as they came with a ‘Made in Germany’ tag. Though there was little or no price difference with other Indian brands like Camlin or Omega, these were not widely available as such. Years later one fine day, while randomly searching for pens made by Faber-Castell, I bumped across the Ambition/Ondoro/e-motion fountain pens which were placed in a premium segment with Graf-Von Faber Castell Anello/Intuition in luxury segment. In India, a few models were available in Shoppers Stop Online and some of the other known e-com sites, back then. I finally ordered an Ambition (then an Ondoro) from Pensavenue, as they were running a discount sale on all Faber-Castell products. I added a converter since it was clearly mentioned that a Faber-Castell Design (FCD) converter was not included with the gift package.

A BIT OF FABER-CASTELL HISTORY

Around 1660s Kaspar Faber was one of the pencil makers in Stein, Bavaria, Germany. Later Kaspar’s son Anton Wilhelm Faber took over the business and the initials A.W were added from his name in 1839. Later on in 1898, when Ottile Von Faber (sixth generation of Faber family) married Count Alexander zu Castell-Rüdenhausen, A.W Faber-Castell was born. Count Alexander modernised the company and introduced the jousting knights logo. Faber-Castell started manufacturing fountain pens in 1951, after acquiring the Osmia Company and produced fountain pens till 1975. They had carried the Osmia logo [diamond-within-a-circle] till the 1960s, given Osmia’s high brand recognition in the fountain pen industry. Later under Anton Wolfgang von Faber-Castell, Faber-Castell started expanding their factories & offices across the globe and also started manufacturing fountain pens under two banners of Design and Graf von Faber-Castell (introduced in 1993) from the 90s.

These Ambition range comes with a fountain pen (with 4 different nib widths), a roller ball, a propelling pencil (0.7mm) and a ballpoint pen with various barrel designs constituting of resin, wood or brushed steel.

Within 3 days, the pen and a converter were delivered in a moss-green cardboard box. The colour reminds me of lush green cricket outfields and the Australian Baggy Green Caps. The box has a slider and the pen is secured with an elastic band on a felted bed, along with a warranty card.

Held in hand, the pen will feel somewhat heavier towards the cap end, with a relatively lighter brushed barrel made of up black coloured resin (Like MB, Faber-Castell also calls it ‘precious resin’, I feel it has comparatively lower density). 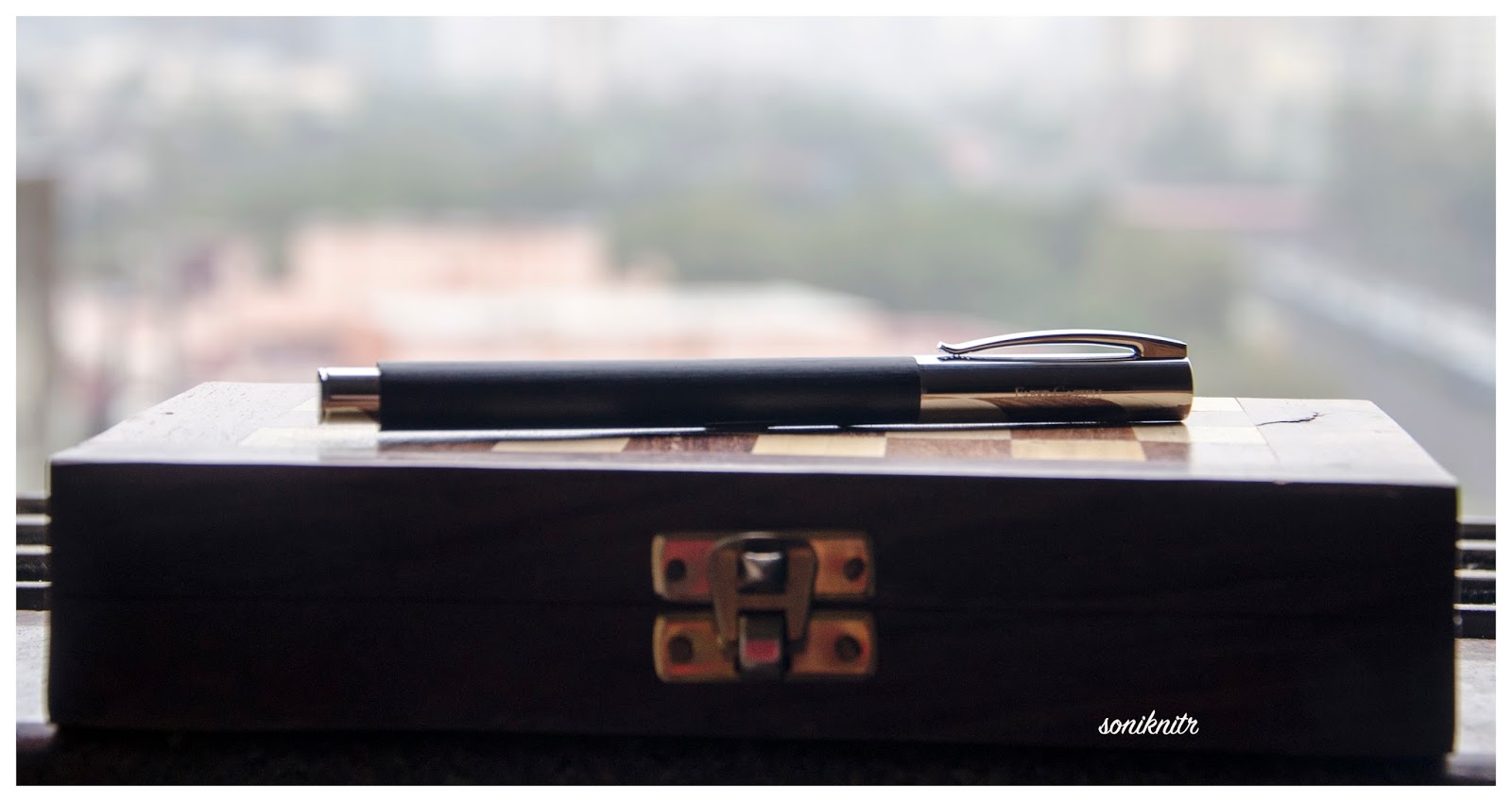 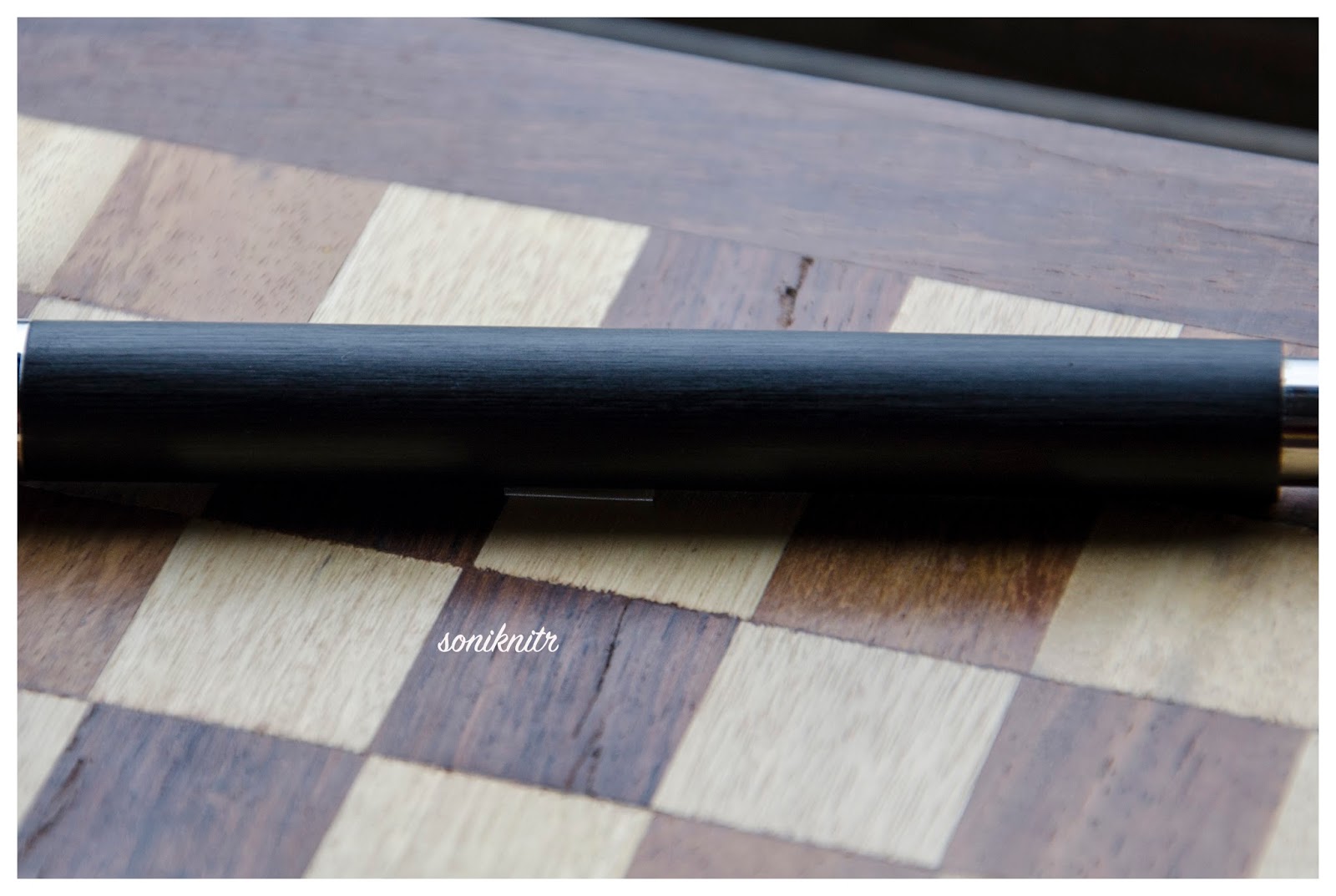 A convergence in its minimalistic design of the chrome plated accents is achieved with another piece of metallic finial at the end of the barrel, which also serves as the click-lock for posting the cap. 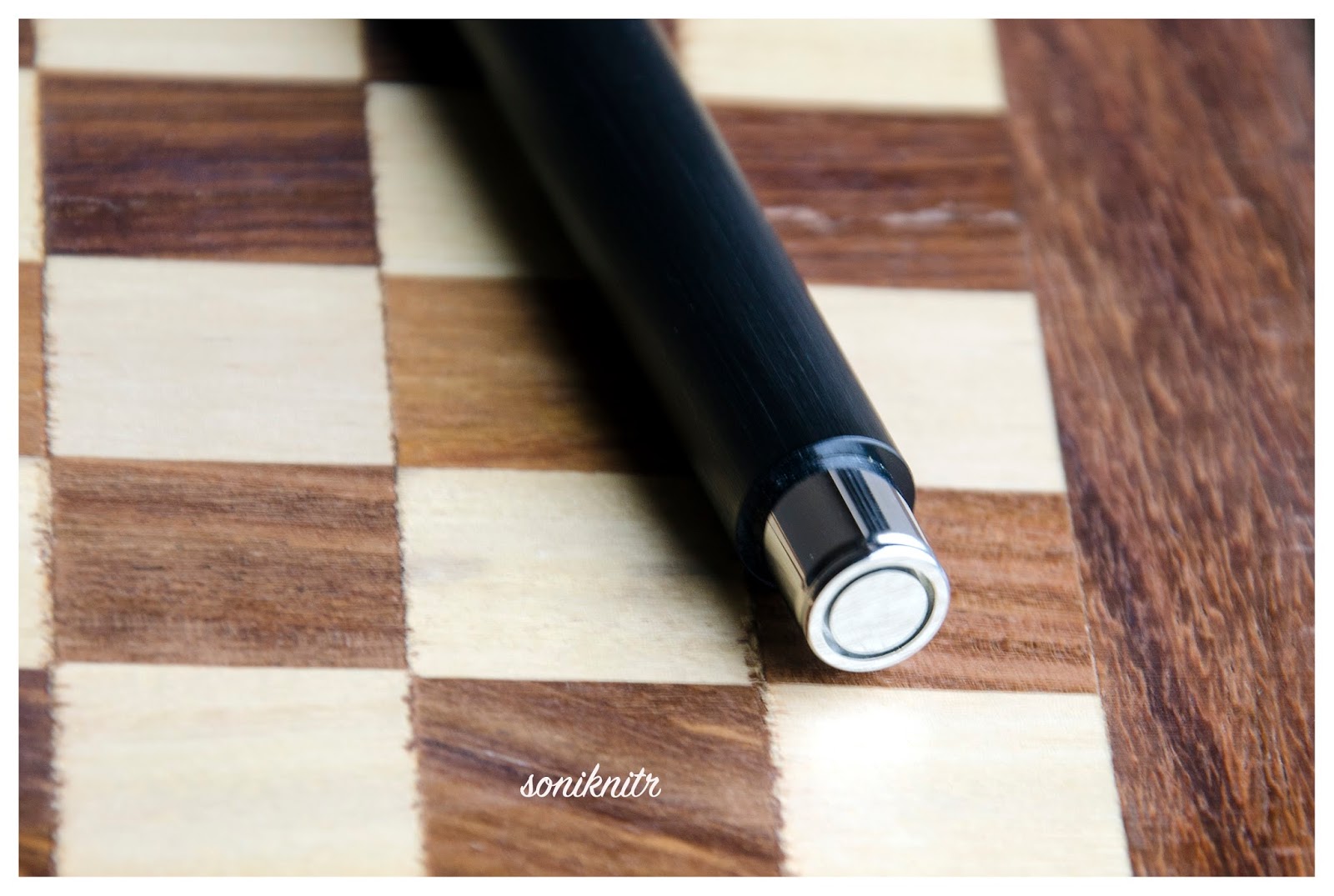 And yes, the chrome accents are prone to fingerprints. 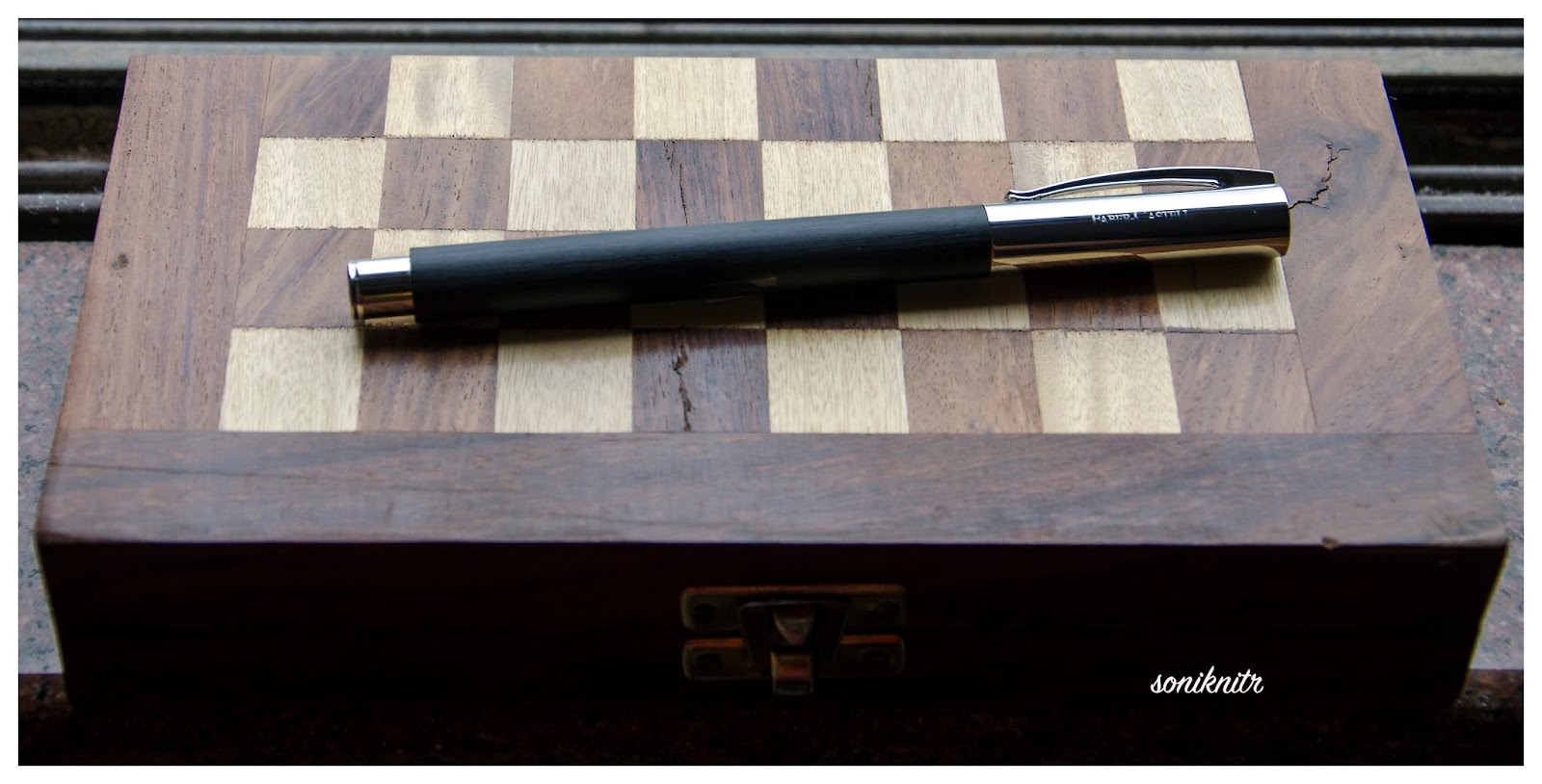 The cap is substantially heavy with a snap-on locking mechanism. Once you pull it, it comes off with an audible click, and you can see a chromed metallic section attached to the non-differentiated grip, at the end of which rests the shiny nib. Absence of any taper in the singular cylindrical section, introduces a steep step for holding the pen.

A mirror finish on the chromed cap etched with the Faber-Castell logo of two jousting knights  will immediately gleam with the slightest amount of light and it is also embossed with the traditional statement preserving antiquity of A.W Faber-Castell - Since 1761. The clip is spring loaded and is shaped like an arc with a concave end. To generate friction with fabric, there are multiple grooves on the insides of the clip’s concavity, where it touches the cap. There is also a plastic insert inside the cap which gives the snap-on friction. However, it seems to lose grip with time. 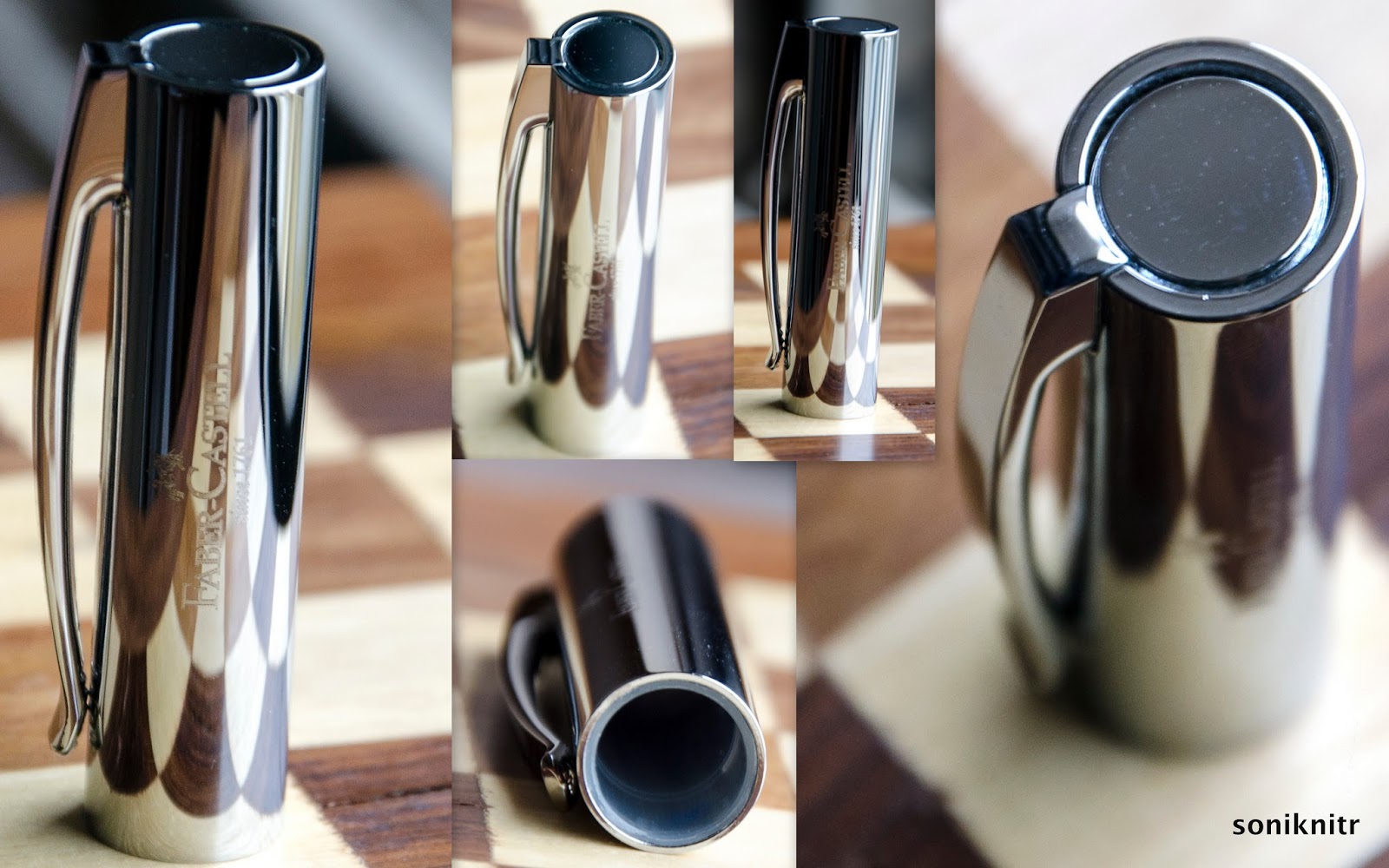 The small metallic section at the end of the barrel unscrews from the resin barrel with less than three turns and it disengages the section containing the nib and CC filling system. The nib has a screw fit, and inserts into a metallic sleeve like most of the Faber-Castell fountain pens which I have seen. The nib sleeve has threads which synchronize with threads on the insides of the resin barrel. 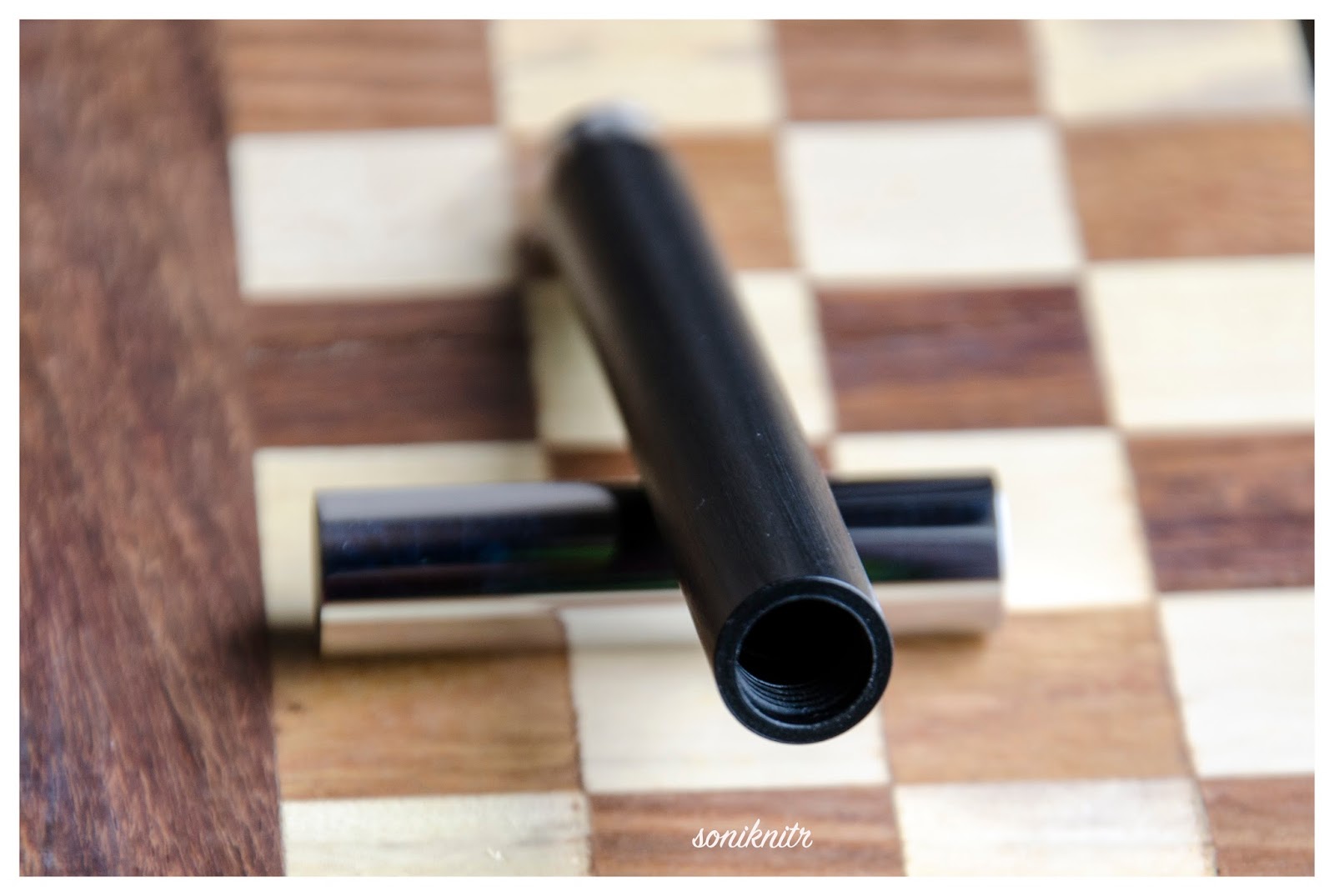 The converter says SCHMIDT on its piston along with a brand imprint of FABER-CASTELL Germany on the metallic sleeve. It has a reasonably high capacity of 0.8 – 0.9 mL, and the ink does last for quite a while! I am usually biased towards piston fillers, but I like the capacity offered by Faber-Castell or Schmidt converters. In case of GvFC Converters there is no mention of Schmidt on the converters themselves.

The nib is made of stainless steel alloy with an iridium tip. The initially available nib sizes featured F, M and B nibs, though an EF was made available later. I went with an M sized nib. Right out of the box, this was a butter-smooth nib.

The nib has a perforated imprint of dots which cover a third of its surface area. Had these been real perforations there would have been an opulence of breather holes. And in fact there is not even a single breather hole. The nib-size is embossed above the traditional Faber-Castell Design logo of two jousting knights near the tail. Nib section is screw-fit and thus easily removable from the steel sleeve for cleaning or replacement. 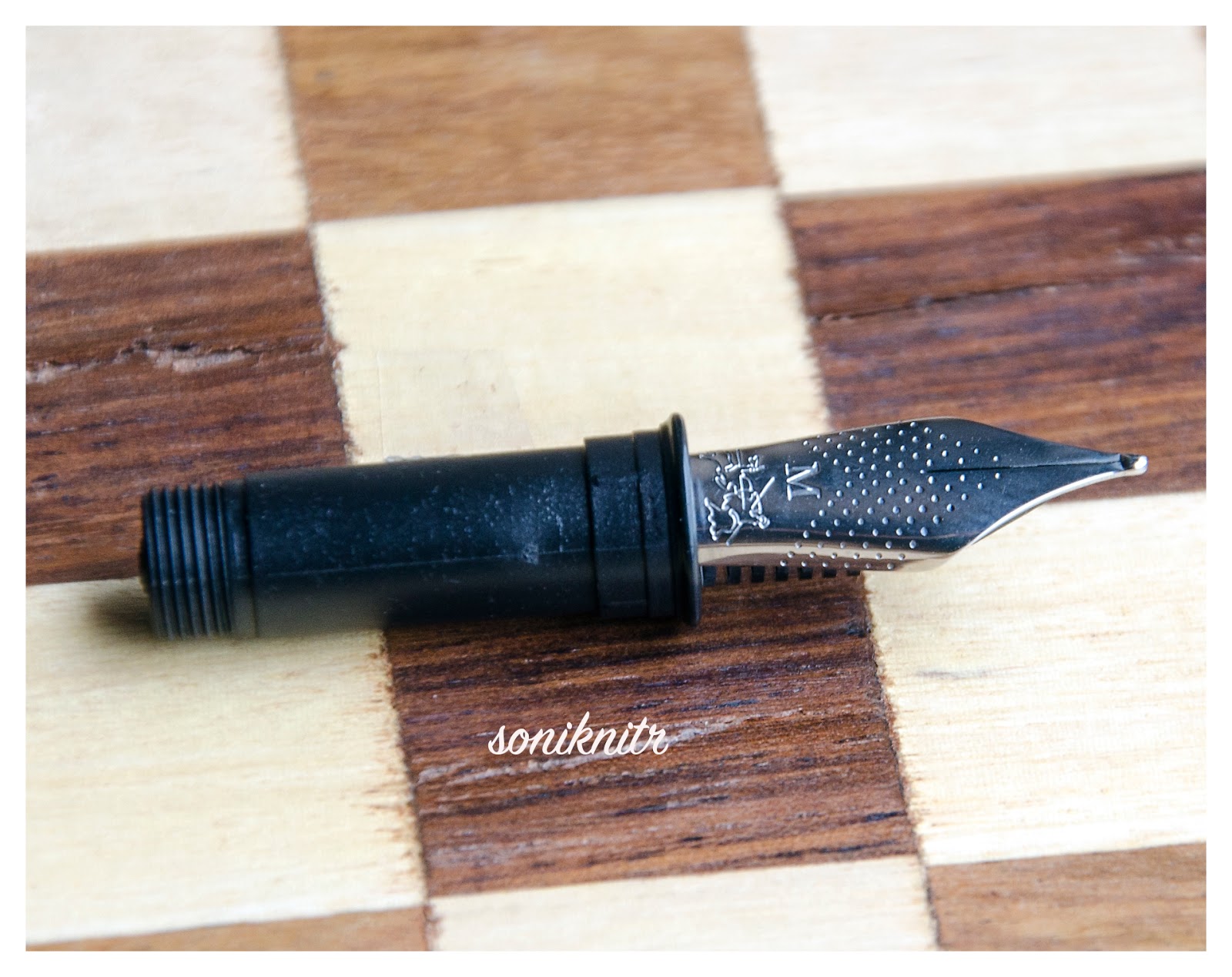 The feed is standard grey plastic, with a big filler hole for ink suction, which is incidentally  also used across the GvFC Intuition Series. 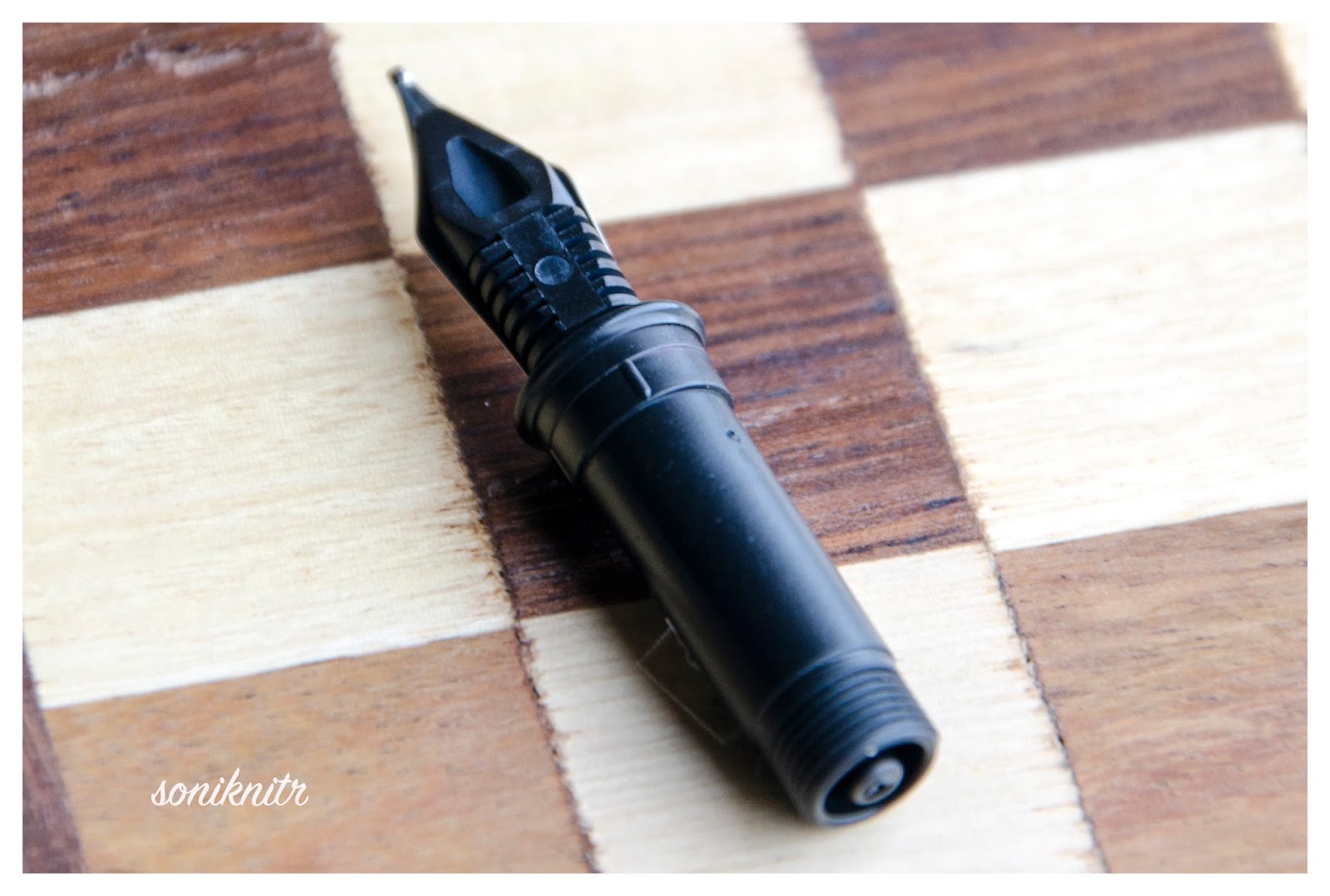 PHYSICS OF IT (3/6) – RELATIVELY SPEAKING

Without the cap, the pen measures around 12 cm, which might not be comfortable for people with medium or large hands. Posting the cap is easy and it seems to be secured with a click-lock at the finial section. Although the posted pen exceeds a 15 cm scale, the steel cap makes it pretty top-heavy. In addition to weight, the cap freely rotates once it’s click-posted. While writing posted, the beautifully arched clip later becomes the pen’s arch-nemesis for top weight imbalance, with free rotation around the metal section. A girth less than 1 cm might be inadequate for the shorter uncapped length.

Capped and uncapped and posted with a GvFC Intuition, Pelikan m400/2XX and a bigger MB146 run below for your reference. The Intuition has a wider grip than the Ambition. (Reusing some older pics here) 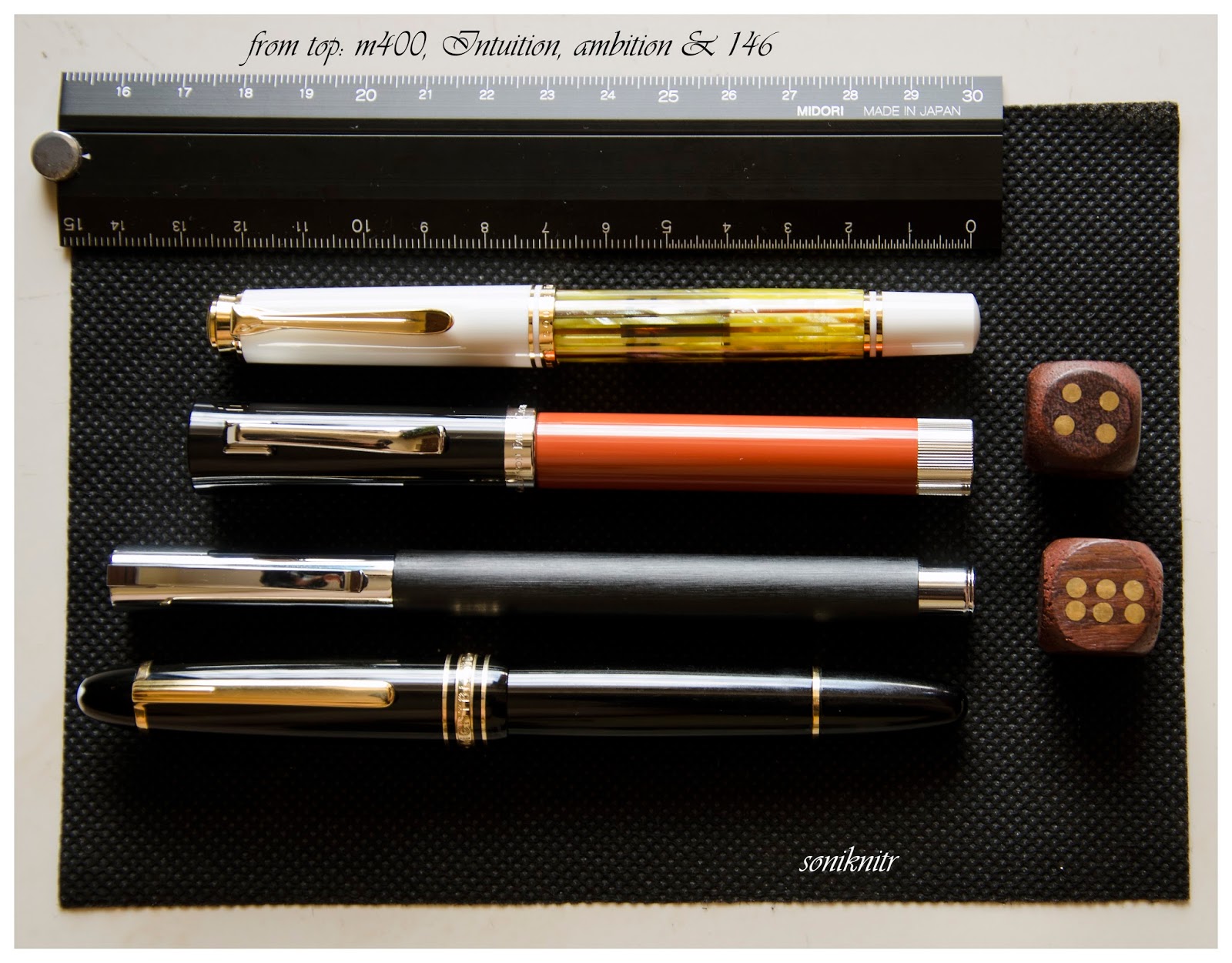 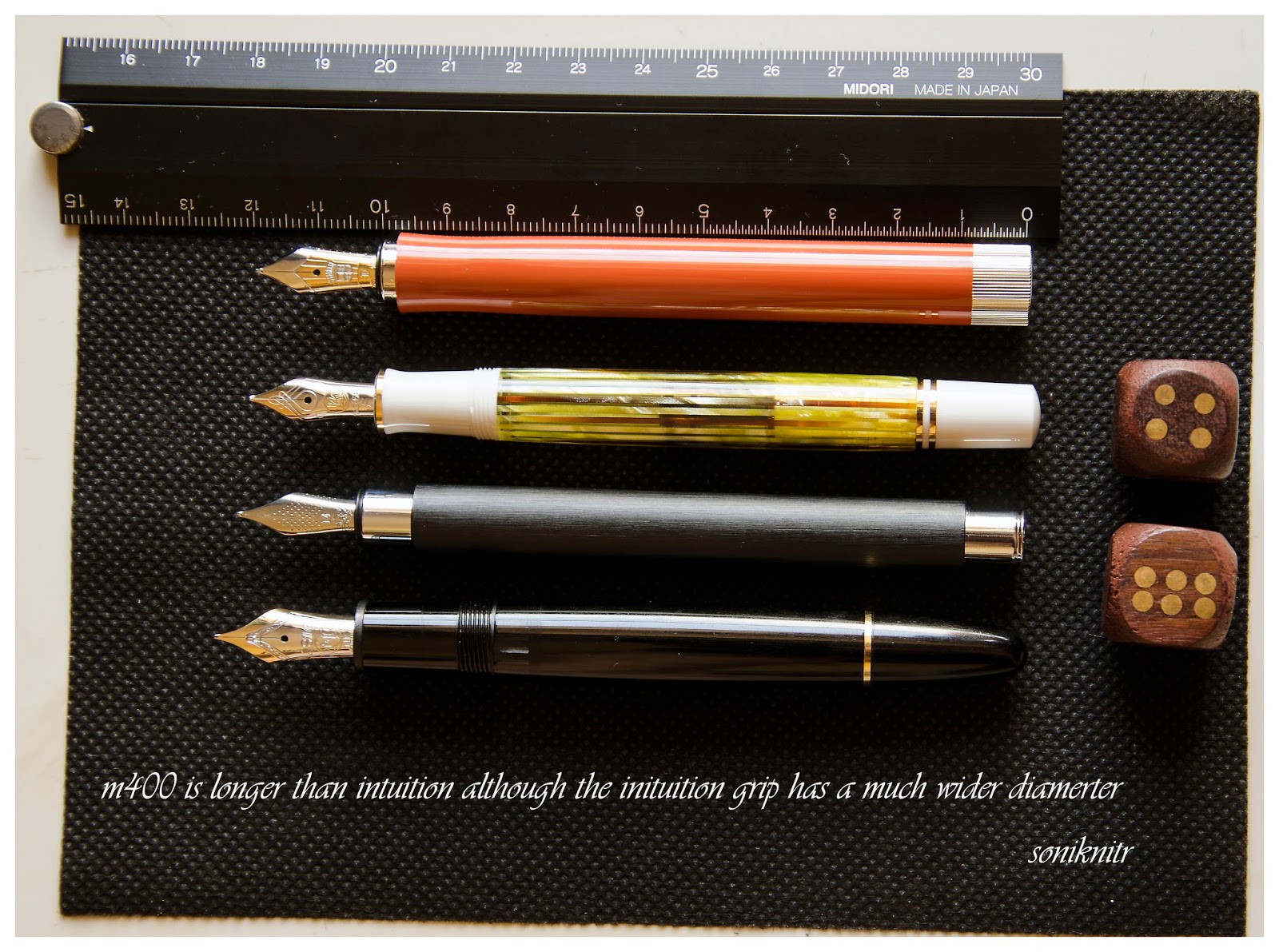 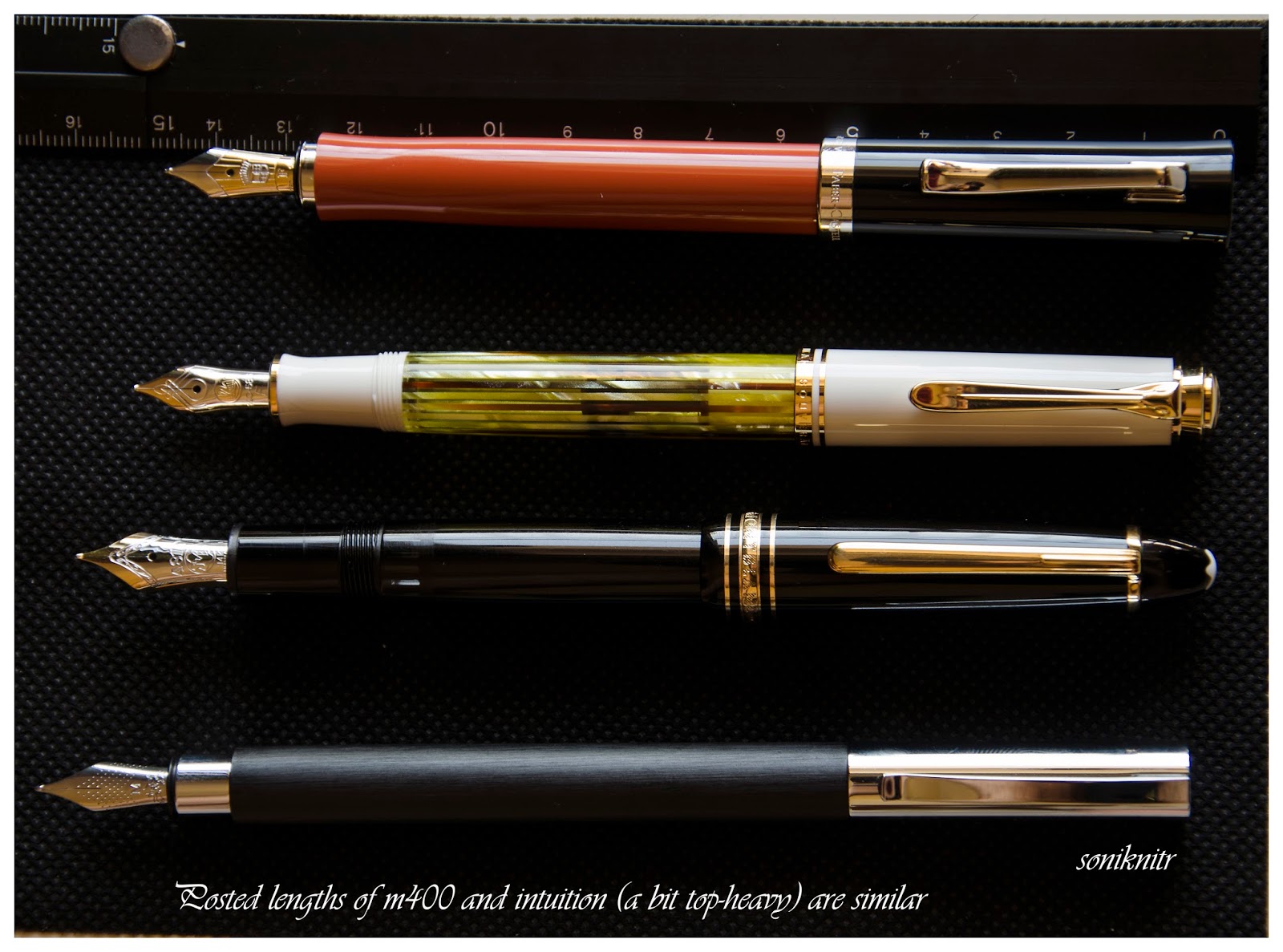 It retails at around USD 70 and I got a converter included at the same price because of the aforementioned discount. I believe it’s a good value for money pen given you too end up with such a nib, which defeats many of the gold ones.

This nib is wet, runs wide and smooth like butter, without giving even a hint of feedback. I purposely used a less wet ink, but the pen did quite well against a drier pelikan 4001 ink. There is a bit of line variation with relatively thicker verticals. The nib has some spring and a touch of softness. In fact it lays a wetter and wider line with a little pressure. If you hold it from the metal section, the pen might feel slippery after some time and it might even rotate a little between your fingers. I instinctively hold the pen just above the metal section.

Being a wet writer out of the box, the Medium nib puts a line which takes more than 20 seconds to dry on MD Paper with a relatively dry Pelikan 4001 Brilliant Black ink. 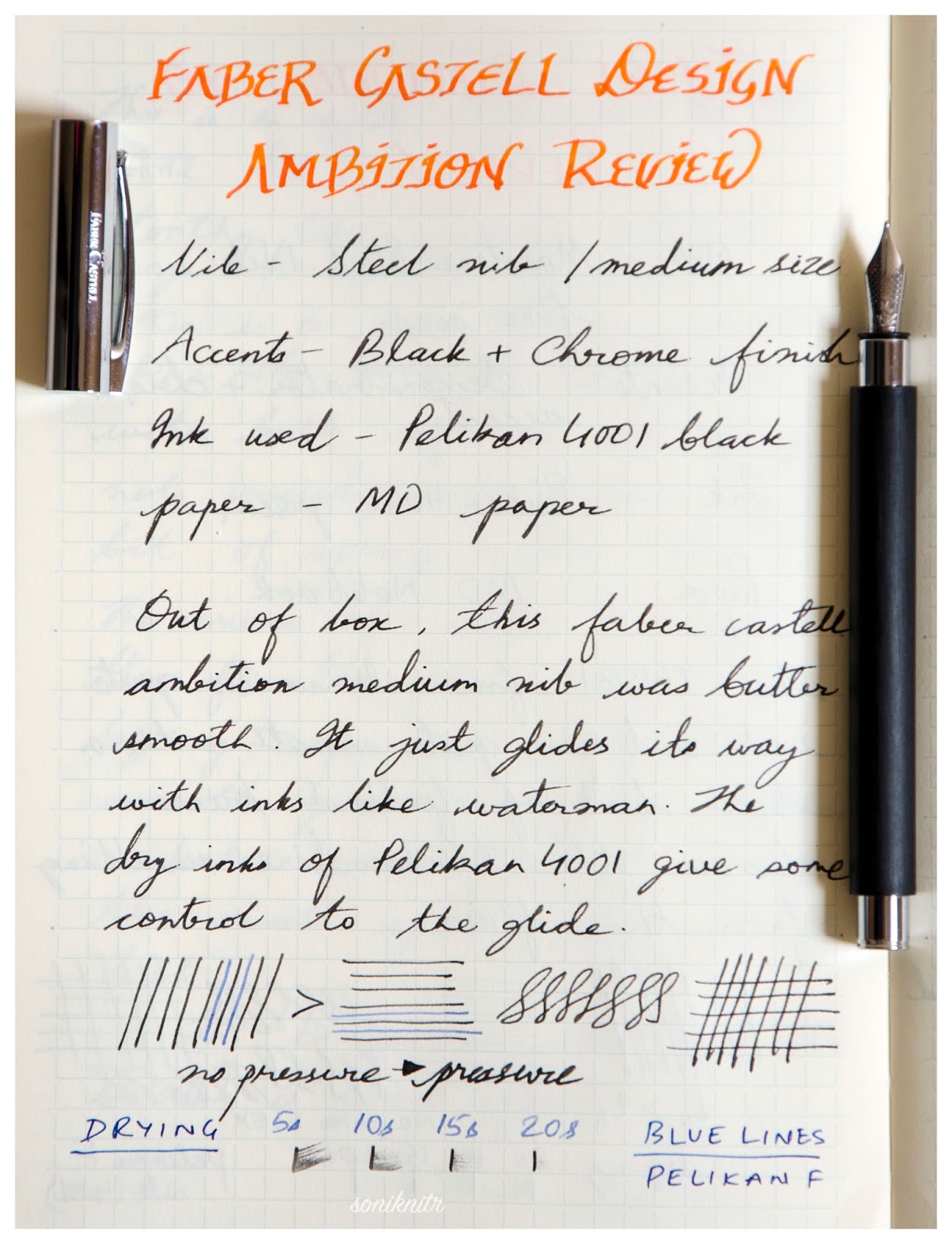 Thank you for going through the review.

You can find some more pen and paraphernalia reviews here.

Sonik : As usual, great review ! What do you do for taking us down the historical ? Profiling FC ..ah ?? Impressive detailing. Thanks.

Sonik : As usual, great review ! What do you do for taking us down the historical ? Profiling FC ..ah ?? Impressive detailing. Thanks.

Since you asked, apart from their website, I had done some 'out of curiosity'

research when I got a vintage FC (rather Osmia from 1950s) pen. Emailed FC people with a few questions and asked for their brochure from 1950s-75s etc, because they had shut down manufacturing FPs by 1975. Used some of that info.

Edit for Adding Content: There are cases of loosening of cap and ink leakage with this ambition series. The plastic collar can crack if you screw it inside the steel sleeve too tightly. Faber-Castell does replace/service defective units free of charge. You can contact Faber Castell at: info@faber-castell.de for any such problems.