48 replies to this topic

Well, since I didn't see anything else available, I pulled the trigger on the Merlin Elegant and Pearl that mentioned was on ebay. I expect these to be slightly smaller than the 33. That make 13 different models in my collection. 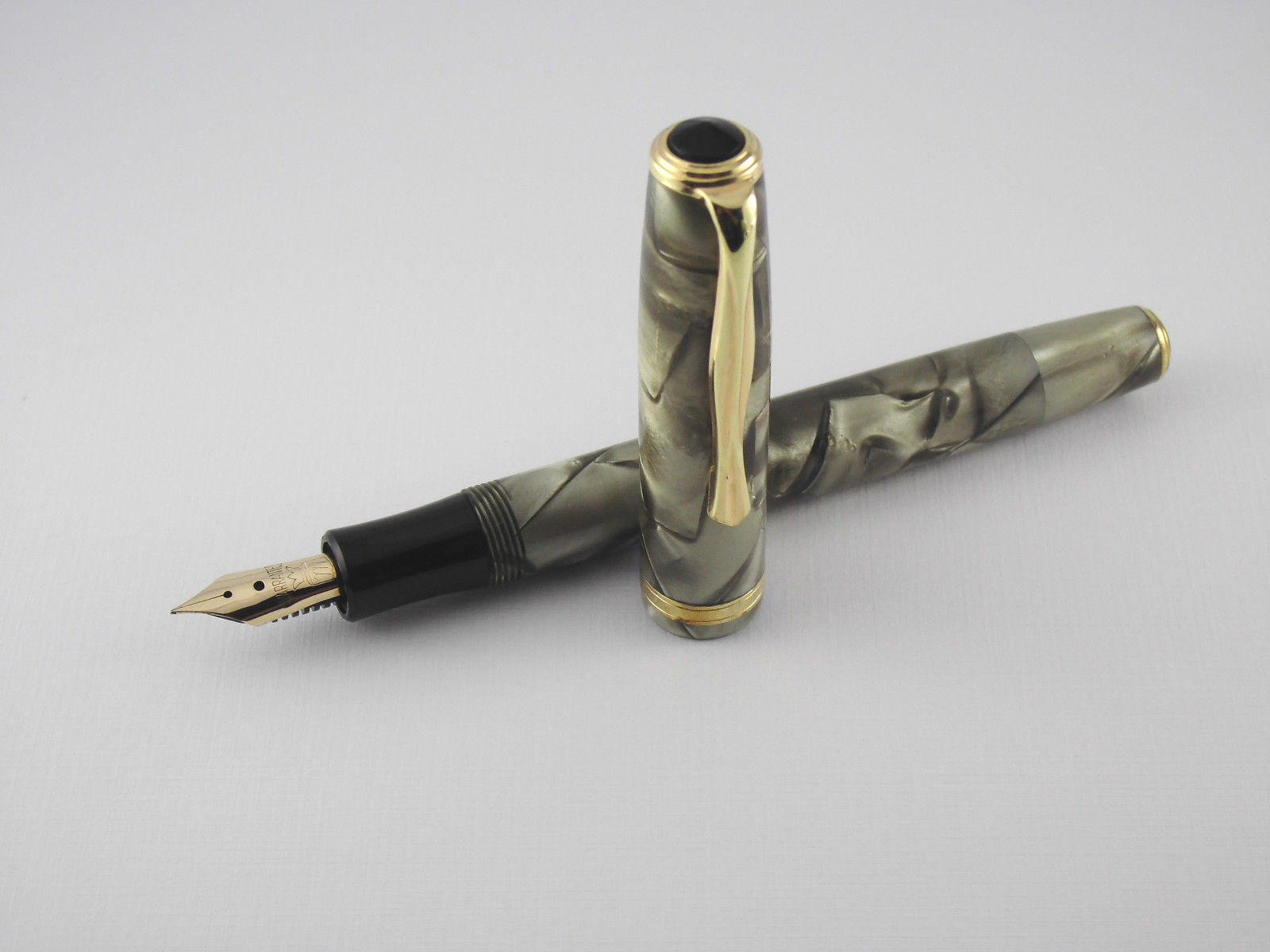 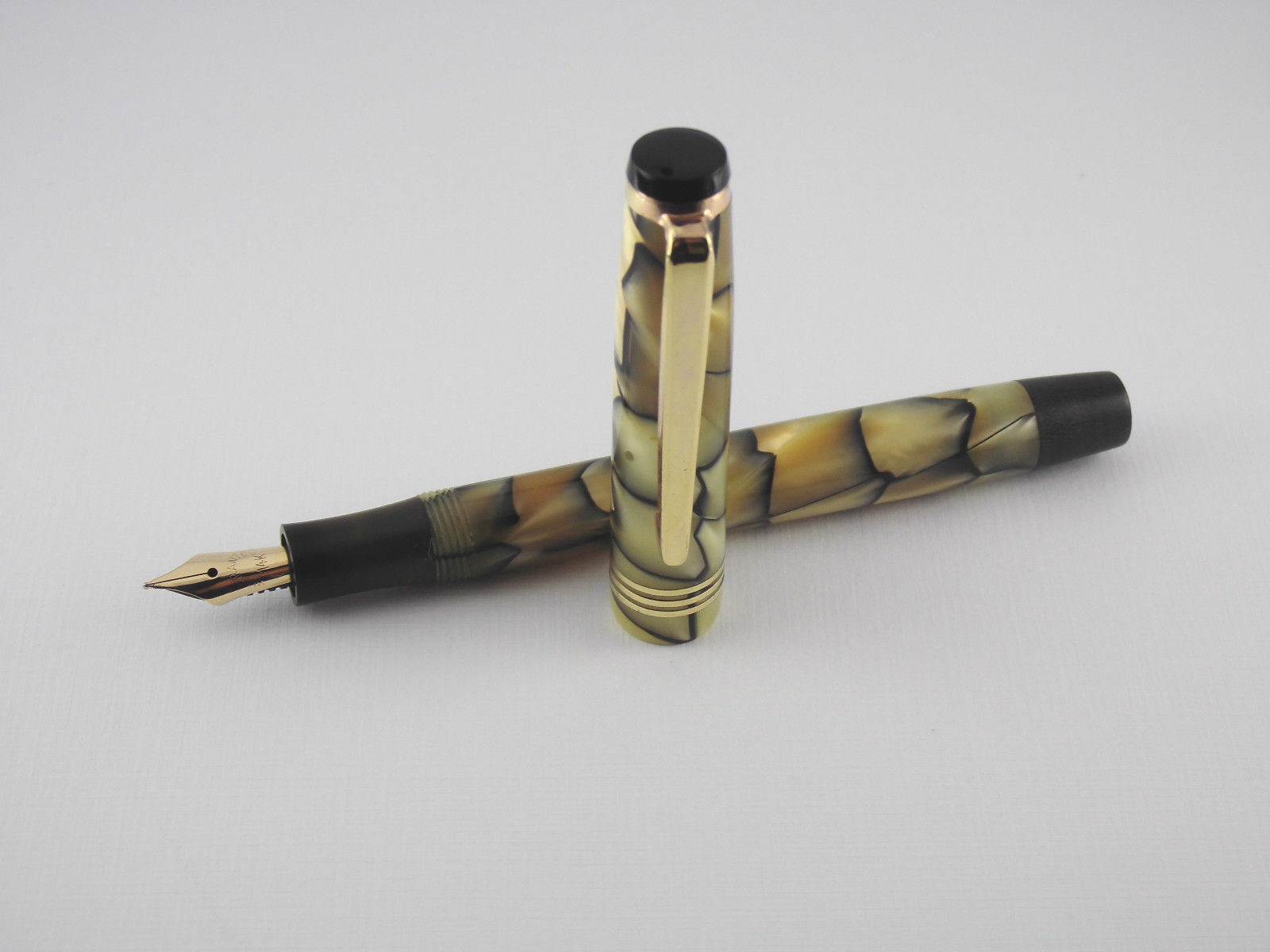 Oh yes, that pearl is lovely. I have that celluloid and it's one of my favourites.

I like the idea of getting the whole collection documented. I had better start taking a few photos of mine, as well!

Those are some NICE. NICE looking pens !! I just bought my first Merlin ( after seeing yours I'm sure it wont be my last !! ) from Pendimonium in Arizona but all they said was it's a NOS Merlin 33 and is a button filler and is supposed to have a soft, flexible M/B 14k nib !! Here's their pics of it:

All the pictures and descriptions are here

The Merlin Diamond was ,as I suspected, nearly identical to the Merlin Triumph.

I also purchased this promotional that, again, may be a Merlin project. Note the logo. "M" with globe in shield and topped by a crown. Very similar to the logo Merlin used on nibs and later on pens. 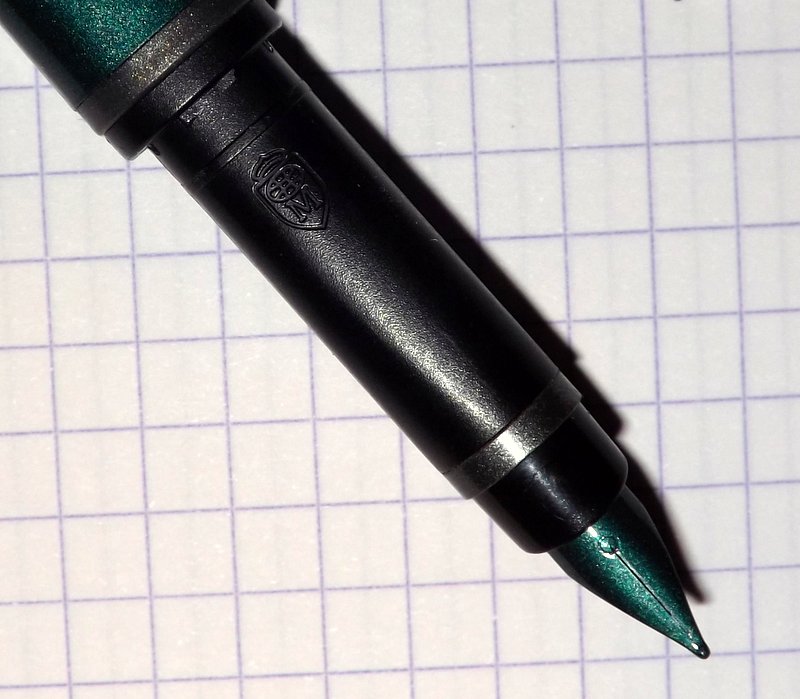 Then I received this little guy as a gift in the Diamond purchase. A Merlin Pencil. And I strongly suspect part of a set with my Merlin Perfect. You decide. 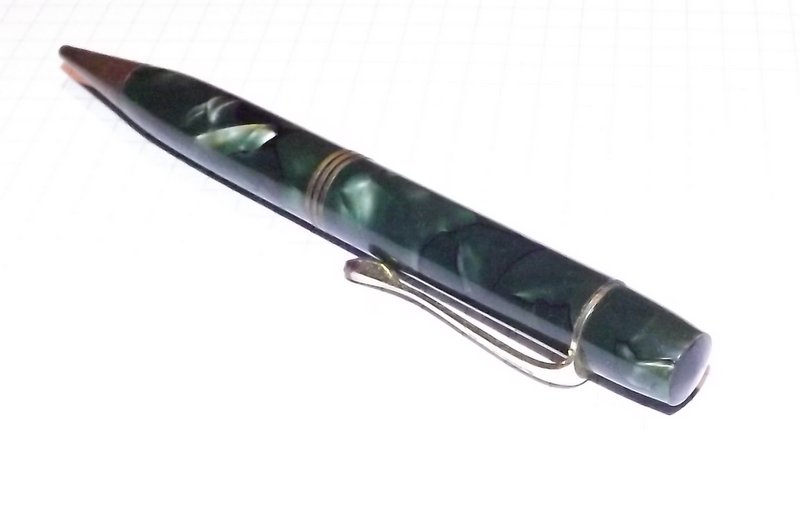 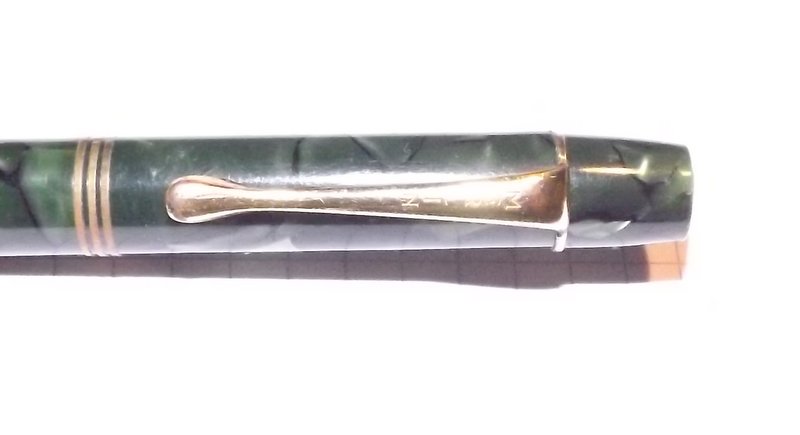 And here is the Perfect.. picture taken under different lighting... but... clip is similar design as are the type and number of rings and the material is a match. 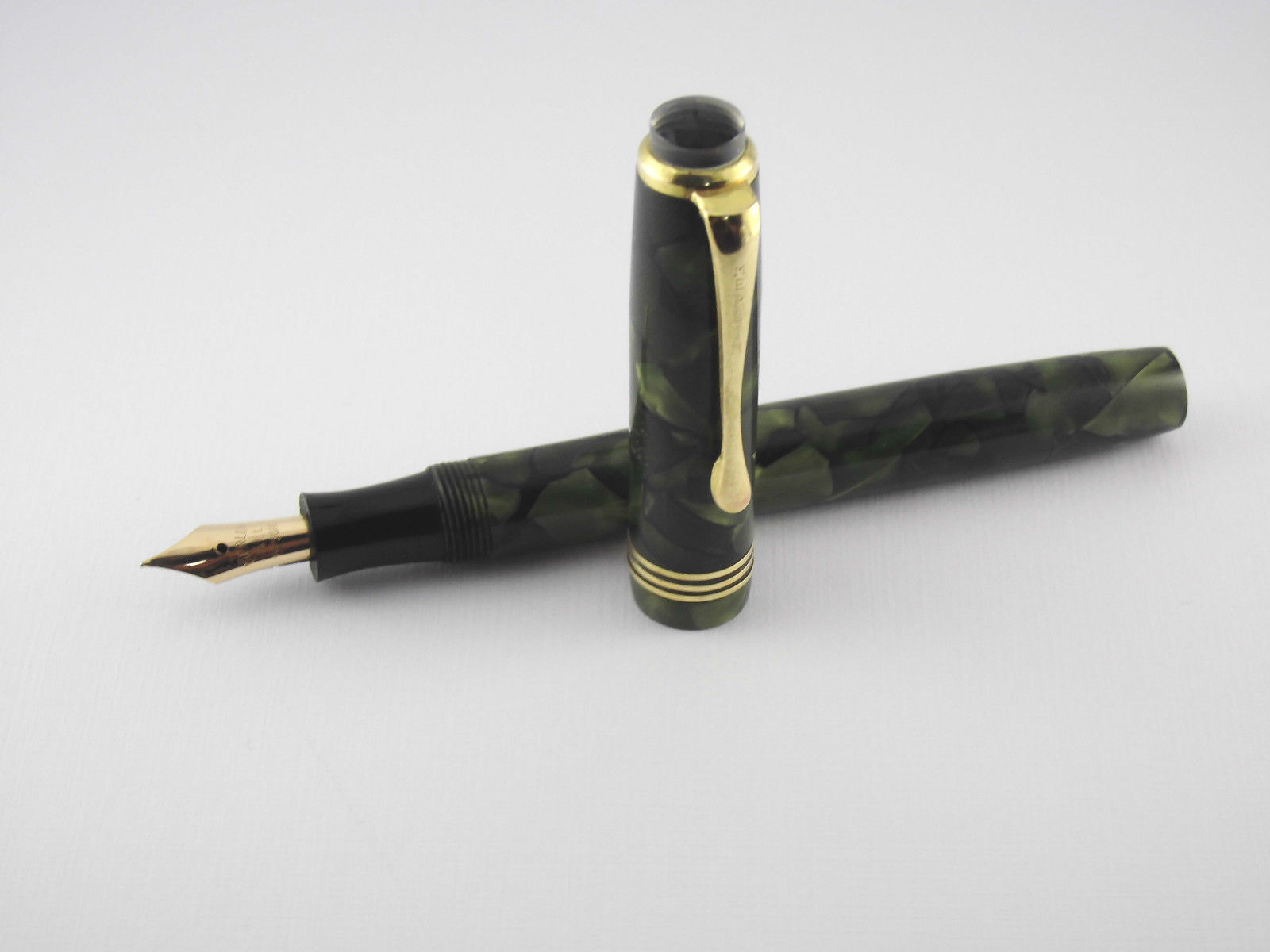 Found another one. A 69 this time.

Similar in size to the Perfect, but a hooded piston filler. 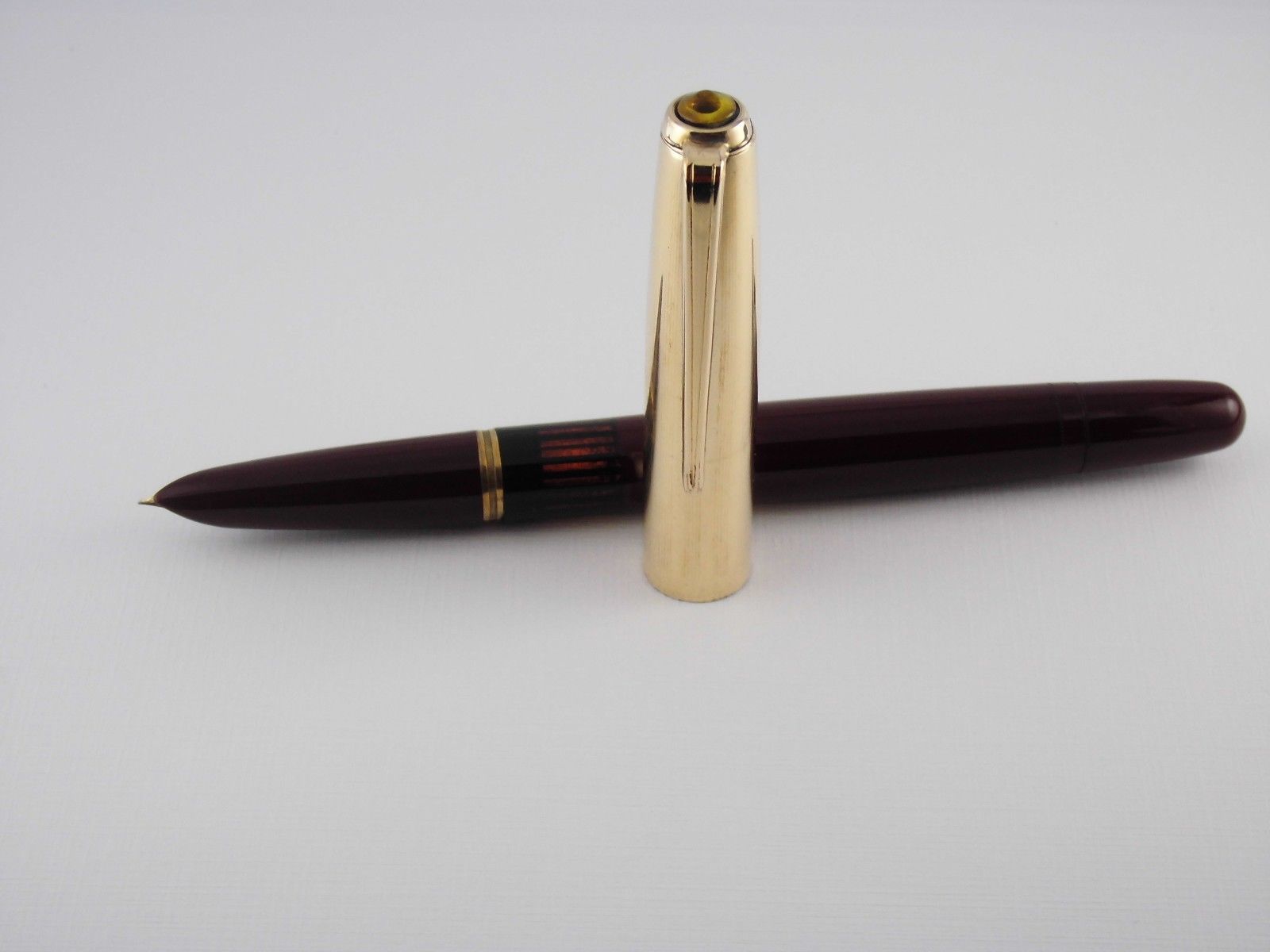 A friend gifted me his deceased Mum's Merlin 33 button filler in grey & GT, a petite lady pen with what seems to be an XF gold nib. It needed a new sac, no surprise there, but its history and sentimental value to the donor make it special. She was in the Dutch East Indies as a teenager at the time of the Japanese invasion, and was forced to be a comfort woman.

I recently bought a Merlin Elegant. It has traces of use, but still writes very nicely. Unfortunately, the celluloid is discolored. I think it used to be purple, but now it is more brown-like.

I speak Dutch and have not yet searched for the history of Merlin pens. If i find out more I will post it here!

I have not been active on FPN for quite a long time but -to my surprise- the account is still working.

Just want to thank you for selling me your wonderful Merlin Diamond lizard pen. 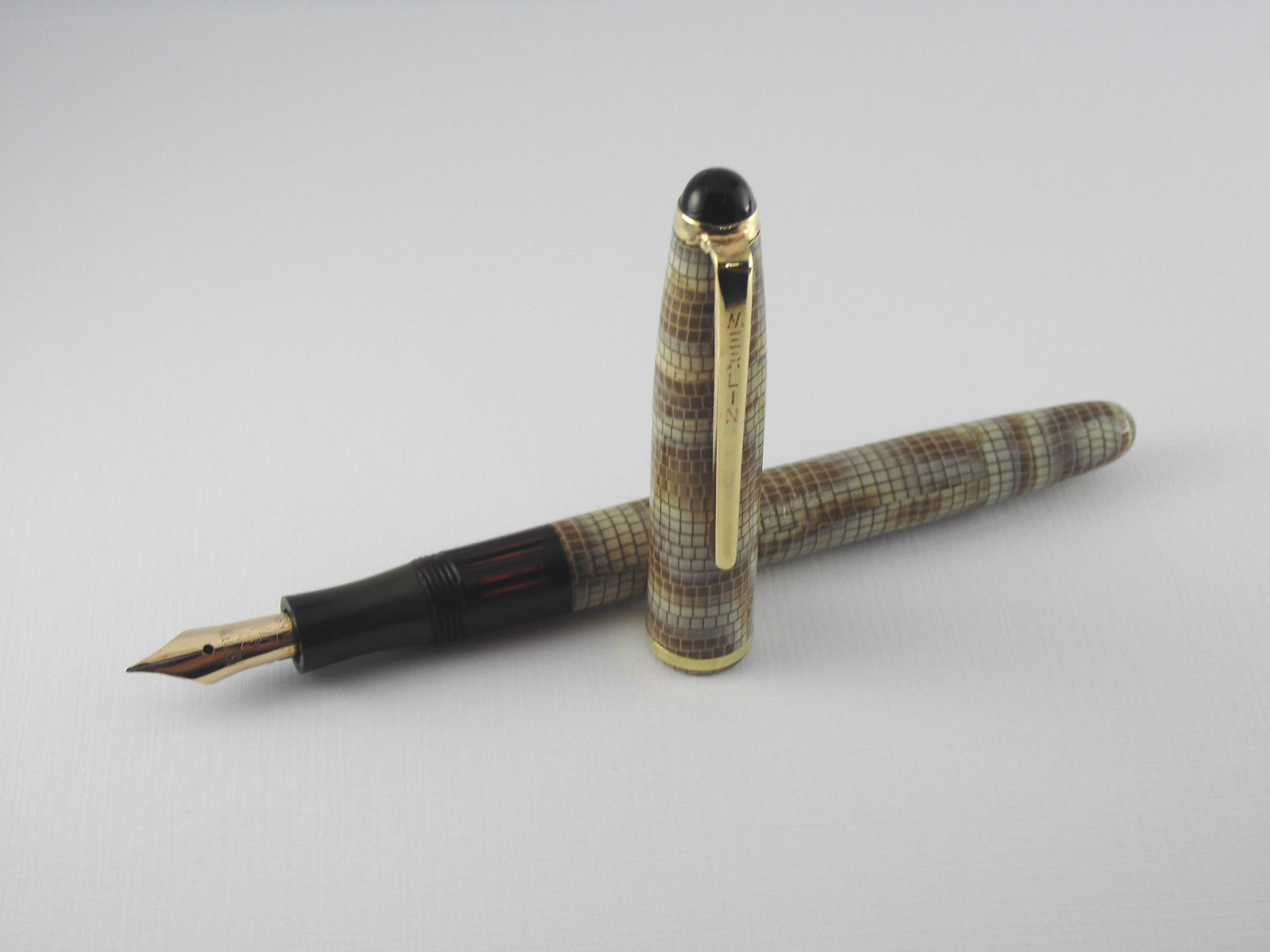 Maybe it is nice to know that the pen came finally home after a long journey.

These Merlins were (in parts) produced in Germany mainly for the Dutch market and assembled by a small family company Amsterdam, were they built the pen parts together to complete pens, as a matter of fact literally at the kitchen table!

In the 1960's the Dutch firm ceased to exist. The best known model in the Merlin range was the Merlin 33.

In later years some models were still produced in Germany by Mutchler in Heidelberg, the same firm that took over parts of the old Kaweco factories and also produced the Reform pens, of which still a lot of models can be found today.

The later Merlin models were of a lot lesser quality though, with steel nibs and plastic parts instead of gold nibs and celluloid.

The square white and green Merlin promotional pens you show in this thread are surprising, because they seem of a much later production date (recent?). I always thought that the last real Merlin pens were made in the late '70's

No need to say I am very happy with the acquisition of this beautiful little lizard pen!

Nice to know that it will get some love.

I just listed my last Merlins (including the promotional pens)? Well, I'm holding on to the Triumph and the Perfect for the time being.