This is a review of a Pelikan M800 F Cursive Italic and an M205 0.3mm, with customizations done by Michael Masuyama (a.k.a. "Mike-It-Work"). 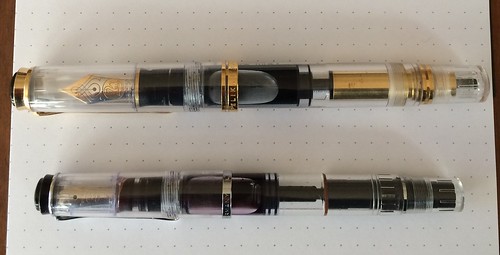 Pelikan’s demonstrators are among my favorite pen designs of all time, with a Bauhaus-like emphasis on function in form. While Lamy remains the standard-bearer in functional design, the Pelikan demos bring together a similar simplicity and elegance in an intentional, practical way. Best of all, the opportunity to watch Pelikan’s much-admired piston filling system in action is always a lot of fun.

No one can deny that the mechanics of the Pelikan piston filler are amazing. And the quality of the pens, overall, is likewise amazing. The resin feels solid and is surprisingly tactile, with a nice polished finish. The only thing that fell short of my expectation was the QC details of the M800. First of all, there’s an acrylic thread left over from the molding process inside the barrel behind the piston. Though it does not interfere with the piston mechanism, it seems like an obvious oversight that this was not removed prior to assembly. Also, though I really like the cut-away in the brass spindle housing, there are two brass shavings stuck in the barrel. Again, while not affecting function in any way, the shavings should have been cleaned out in the assembly process. These small but (in a clear demonstrator) obvious defects are disappointing, especially given the high expectations for an M800 “Special Edition.” Overall, though, the construction is solid and the quality of the materials is readily apparent. 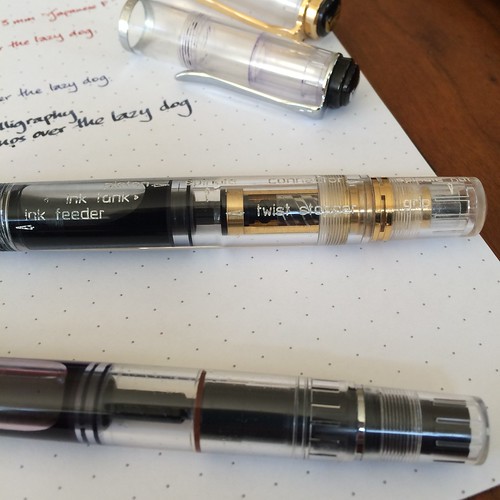 Writing with the nibs, on the other hand, was somewhat disappointing. I’ve never been totally thrilled by a Pelikan factory nib out of the box: the tipping, while abundant, is very round. What’s more, the line put down even by a factory EF is so broad that I struggle to write legibly with it. The nibs are ok, but I am not sure why Pelikan does not produce a wider range of factory-ground nibs; it seems that for their market, Pelikan could produce a wider variety of grinds. Fortunately, there is a ton of tipping on modern Pelikan nibs and they can be readily customized by a nibmeister. (Unfortunately, that route adds expense in both of time and dollars to every Pelikan purchase -- but read on!) 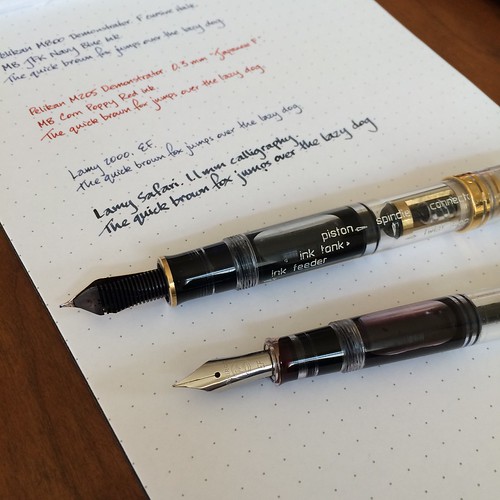 When I finally decided to go ahead with customized nibs for these pens, Richard Binder (who had tuned my Matador 811 and reground my Pelikan Pharo) had closed up his mail-in nib service. I had previously swapped my M800 EF nib for an already-ground F italic via the FPN Classifieds, but the italic – while producing extraordinary line variation for its relatively narrow width  – turned out to be quite crisp and way too sharp for everyday writing. I sent the nib to Masuyama of “Mike-It-Work” renown to be reshaped as an even narrower cursive italic. The result was an italic grind of truly miniscule proportions (finer even than the 0.4mm stub grind on my Pharo) with a relatively dry-ish flow that perfectly suited my small handwriting. Most amazingly is that despite the small scale, the line is still clearly an italic. The dryness of the flow helps preserve the sharpness of the line and allows for small, tight lettering. I appreciate having a pen so well adapted for my writing style. The only drawback is that due to the dryness of the line (sometimes maybe a little too dry), the color saturation changes dramatically when the surface finsih of the paper is uneven. I think a slightly wetter nib would produce a more consistent line, but I was concerned about losing definition (especially in the cases of "a" and "e"). 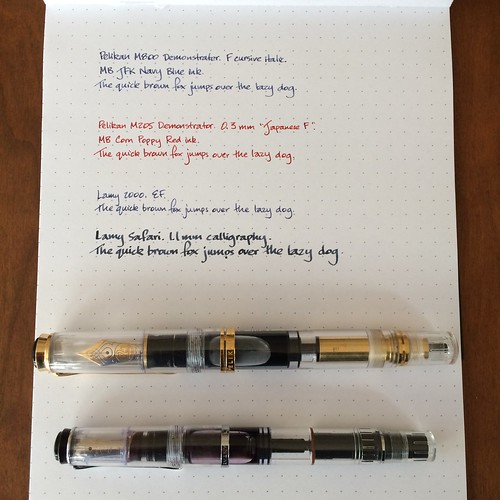 I was less disappointed initially with the factory steel M205 nib, which was closer to what I was expecting in an EF – but even that nib was too broad in the long run. And, again, the out-of-the-box writing experience left me rather disappointed. This time, a Masuyama 0.3 nib, listed as a “Japanese F” (equivalent to a Western XXF), came up in the Classifieds and I was lucky enough to get it before someone did. I had used one of Richard Binder’s XXF “Waverly” nibs on an M205 in the past, but could not get used to the curved tip (even though the Waverly nib wrote perfectly). I appreciated that the Masuyama 0.3 grind maintained the straight profile of the nib. This super-fine steel nib writes a very consistent, wettish line and is one of the best nibs I have used. 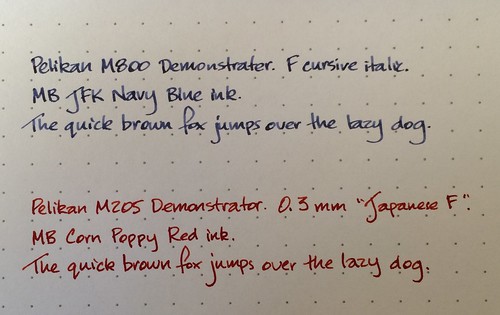 Pelikans are mechanical marvels and the demonstrators superbly showcase the awesome filling system. However, I find the factory nibs, while reliable, somewhat lacking in the character that makes fountain pens so enjoyable for me to write with. Because Pels are well suited (perhaps even intentionally built) for customization, additional investment results in pens that are awesome for serious writing. Pairing the functional and awesomely minimalist demonstrator design with a customized nib epitomizes the modern fountain pen experience. In the future, perhaps I will even add an M1005 Demo to the lineup…with a customized nib, of course.

Thanks for great reviews. I too am no fan of modern Pelikans (though I think that the designs are too dour, as well as the nibs too dull). I also have the M800 demo with the etchings - some rare flair in the Pelikan arsenal!

I love your pens and your handwriting. I am a big fan of Pelikan demonstrators and I really like your fine to extra-fine italics. I will have to put one or two on the shopping list. I have met Mike at the LA Pen Show, but never had him do any work for me. I guess that is about to change.

I like all of the Pelikan pens—old or new.

"One can not waste time worrying about small minds . . . If we were normal, we'd still be using free ball point pens." Bo Bo Olson "I already own more ink than a rational person can use in a lifetime." Waski_the_Squirrel
I'm still trying to figure out how to list all my pens down here.

Nice review- I have an M805 Demonstrator with engravings and silver trim on the way!

what a beautiful handwriting you have...

thank you for sharing the review

Also tagged with one or more of these keywords: pelikan, m205, m800, masuyama, mike-it-work