Quite a while ago  - well, a few years ago if I am honest - I bought a Platignum 3776 from a large newsagents that normally didn't hold a lot of pens, butt hey had this one and I like the look of it. At the time I had my trusty little Sheaffer Prelude (I know; one of the world's most hated pens and all that, but I like it - sentimental reasons mainly) in daily use mode, so the Platignum went in a drawer and stayed there until a few months ago. I took it out and inked it up and it had a nib from hell. Since then the newsagents has been taken over by another company who will not honour the purchase, so no refund is possible. The right hand tine is about a mm and a half longer than the left, but the good news (or so I thought) was that it all appeared to be tipping material. I got to work with the micro mesh and was just getting to the sweet point when.....bang; the tipping material on the left hand tine came right off to reveal a tiny bubble. This I think explains the length discrepancy. It's a bit annoying because I love the size, weight and look of the pen. Are there any decent nibs that will fit (the feed and nib come out quite easily) or will I just have to bite the bullet and spend on a Platignum replacement nib (the Platignum nib looks cool)?

Also There's a Platinum 3776 and then there's a Platinum Century 3776. The Century is a newer version with a slightly different nib/feed design and a slip-n-seal cap. I've owned two of them. But yes there's a slight difference in nibs depending on if you're talking bout the older one, or the newer one, and they don't sell their nibs separately and I am unaware of any manufactures that make one that fits.

You can get an entire Century 3776 for about $90 shipped from Rakuten (the clear-ish burgundy one is also about the same price, and the blue one about $10 more).
http://global.rakute...item/pnb-10000/

If they did sell their nibs separately, they'd probably cost about that much.

Thanks KBeezie, yes, I did mean Platinum.

I feared as much regarding the nibs and the cost of the pen.  I suspect mine is the older version. It has a kind of flat and broad-ish nib. I was just wondering if there might be a type of nib I could get on the cheap that would fit it.

It'll say Century on the cap band, and the nib style will be a little different if it's the newer one.

Here's two I had. The Century 3776 will have an additional gold ring/band above the main band on the cap. The original 3776 just has the single band at the base. 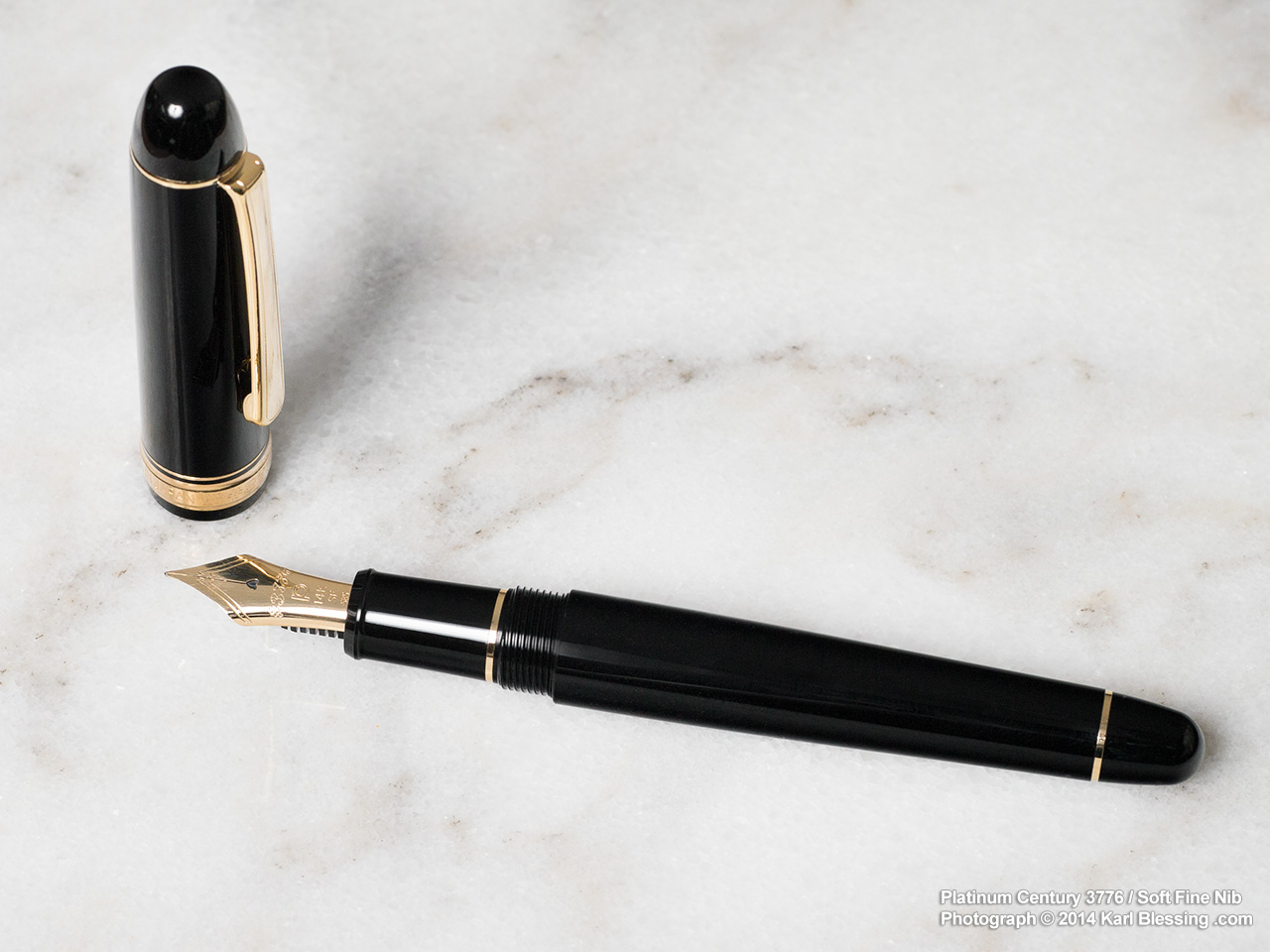 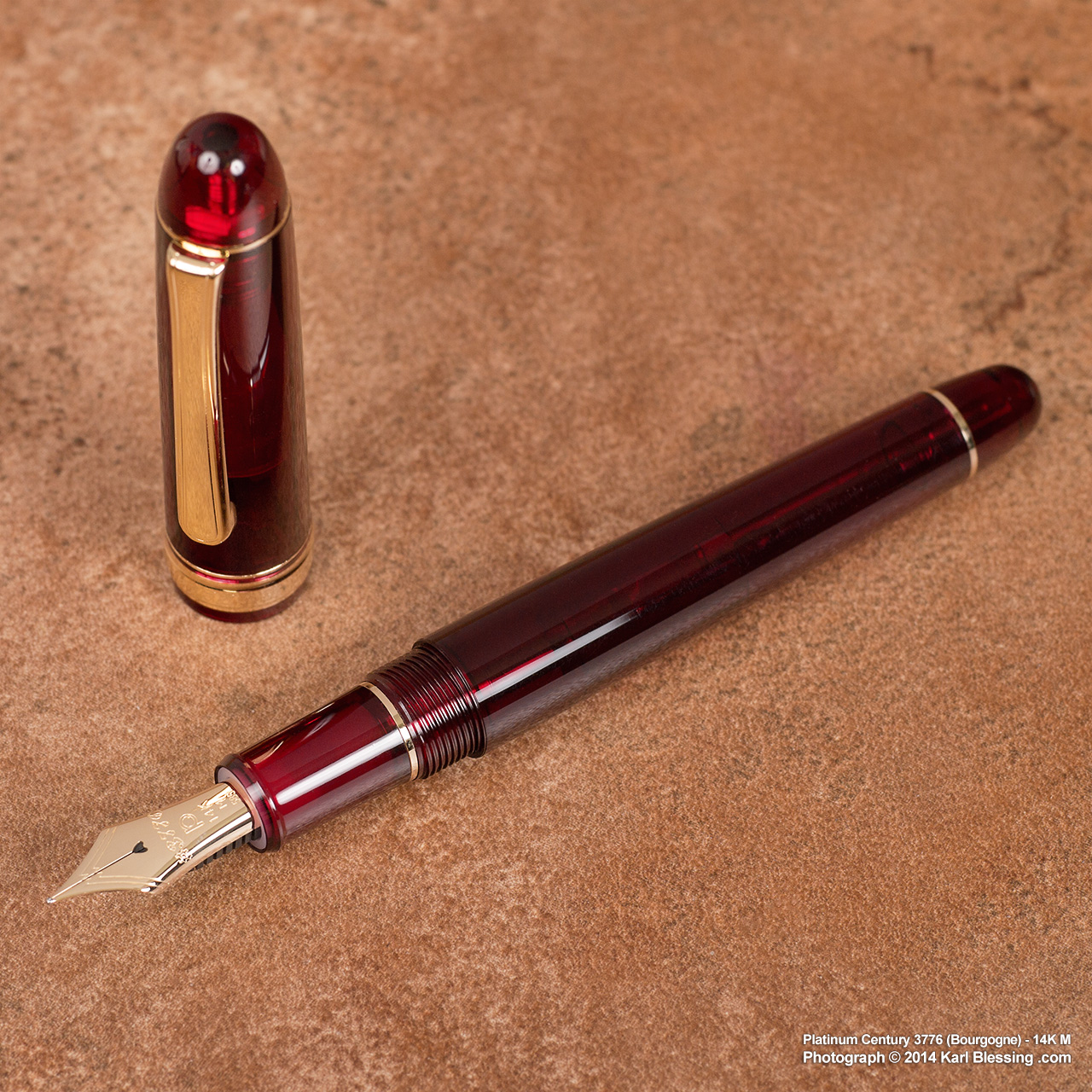 Far as finding a nib. Nope. Platinum's nibs are proprietary. Chance of getting a replacement nib is probably to find a pen for parts/repair, but being a C/C pen, they're not likely to show up for repair sales unless the nib or feed itself is damaged. You can probably search ebay and such for the nib, but I haven't seen them around separately.

What I have isn't a Century.

What I wondering was can I buy any other type of nib and stick it in? Like the ones that are sold on Goulet for instance. The feed pulls out quite easily.

What I have isn't a Century.
What I wondering was can I buy any other type of nib and stick it in? Like the ones that are sold on Goulet for instance. The feed pulls out quite easily.

Goulet nibs are standard #6. Platinum's nibs are platinum's nibs, they're proprietary and not of the same shape/size/thickness. If it were as easy as just slipping in another nib, someone would certainly have done so by now.

Also I'm not 100% certain on this, but unlike the newer Century 3776, the nibs on the original 3776 cannot simply be pulled friction-fit style.

You may have two choices.

2) Inquire with nibs.com and similar about re-tipping the nib, http://nibs.com/orderform.html

You may also contact http://www.fountainpenhospital.com/ about possibility of any loose 3776 nibs from perhaps broken pens, but it's unlikely. They are listed as a formal dealer for Platinum.

Just noticed you're in Ireland, the customs/VAT incoming from Japan may make buying the pen new not very cost-effective.

Maybe your pen has an oblique or italic nib.

Maybe your pen has an oblique or italic nib.


Did they ever sell factory obliques?

Did they ever sell factory obliques?

I dont know. In particular Japaneses tend to make special things for special markets. I'll not be surprised if the nib in question could be an italic or oblique nib.

I dont know. In particular Japaneses tend to make special things for special markets. I'll not be surprised if the nib in question could be an italic or oblique nib.

Though an oblique would still at the very least show the tipping and a smooth slant from one to the other, a broken off tipping is a bit more apparent.

It has even less now!

The next best thing is to buy a nib from Nakaya... It will be that expensive but they will fit since Nakaya nibs are made by platinum also no other nib fits the Platinum feed except a Platinum nib do take not the top side of the nib is very very very flat not round unless your willing to change the shape of the replacement nib to the Platinum feed then do so
Your next best option is to send it to your nearest platinum retailer if you have one and tell them about nib repair and see if you can get any information from them
If all else fail send it to a nib meister and hope for the best
And lastly platinum doesnt make obliques they however make very very fine tips that makes them different from their competitors pilot and sailor
The former has western inspired nibs while the latter has... Well say very very exotic nibs
If you see an oblique platinum its not a platinum its a custom ground one but if you see an oblique nakaya that however is another story since they grind the platinum nibs in house This or because of John Mottishaw or if there is another US retailer for Nakaya that does custom grinds

Since the nib bubble sounds like a factory defect, surprised no one suggested you contacting Platinum or their distributor in your country, explaining situation and including a photo if possible of nib and requesting their assistance.

I would hope that Platinum would be sympathetic to your plight and want to assist.

Think you have nothing to lose in trying this approach and maybe you'll get a positive outcome.

+1 for ArchiMark's suggestion of contacting Platinum about it.

If that brings no joy, you essentially have a sunk cost - you cannot use the pen as is and any alternatives that see you able to use the pen involve changing the nib.

So, why not try playing with the nib? That is, you could have a go at grinding it down to something usable, albeit broader. The worst that could happen would be that you lost the nib - which is not usable anyway. Just a thought.

Also tagged with one or more of these keywords: platignum, 3776, nib