29 replies to this topic

If you want an actual flex pen you can use for art, try the Desiderata Flex Pen. I have one and it's excellent.

Listen to this person!

I think though the issue with ink flow or lack thereof leading to early railroading is prevalent in most modern semi-flex/flex pens, ie noodlers, Serwex, Stipula, etc, and not just the Falcon.  I don't think the feed on modern flex pens are designed like the vintage flex pens like the Waterman's Ideal or Mabie Todd's.

Yes the issue is flow with the Pilot Falcon, and other Pilot models with the FA nib for-example, they railroad.

With one exception - the modern "flex" pens that you cited have plastic feeds, not Ebonite (hard rubber) feeds, which support greater ink flow. The exception is the Noodler's Ahab and Konrad pens, which have true Ebonite feeds. The Ahab and Konrad pens typically do not flow well out-of-the-box because the feeds come with uncut channels the user are supposed to open-up as needed.

Also, Ebonite feeds get soft when heated, which allows you to "Heat-Set" the feed to the nib. Heat-setting improves ink flow even more.

Modern manufacturers don;t use Ebonite because:

* Ebonite material is far harder to find and costs much more than plastic.

* Ebonite feeds must be cut and formed one at a time. This is labor intensive and far more costly compared with injection molded plastic feeds. Also the machines used to cut Ebonite feeds are either old and hard to find, or must be specially made.

^ Pens with Ebonite feeds need to be individually tuned and heat-set by hand for proper flow in the factory. This is time consuming and costly (which is why Noodlers expect You to do it to their cheap flex pens).

Noodler's probably has their Ahab and Konrad pens made in India or Pakistan, where labor is cheap and vintage pen-making materials like Ebonite and the craftsmanship can still be sourced.

Now to be fair - many knowledgeable pen persons claim the Pilot "Flex" nibs where never really designed for use in western style writing, they are designed for springiness and moderate flex when used with various forms of Japanese hand writing.

That may be true, But today Pilot knows the Falcon is being sold in the West as a "Flex" nib pen, while at the same time knowing the stock plastic feed cannot provide enough flow to keep up with the nib. Yafa/Stipula does the same shady thing with their T-flex  nibs and now their Flash pens, which are "Railroad-City" by some reports. The Stipula Flash having a plastic feed is rather odd to me because I suspect the parts (if not the whole pen) are made in India.

There is a niche market out there for third-party Ebonite feeds specifically made to replace the plastic feeds in many of these modern "Flex" pens. But unless fitted by a Professional, these replacement feeds will need to be adjusted and heat-set by the end user. Not a simple thing, but doable with some practice (hint: start on an Ahab).

A fine Japanese poster here said, the Japanese nibs are made for a tiny printed script.

Western for cursive...one of the reasons for the size differences.

If you are a printer, then a Japanese nib should be right up your alley. 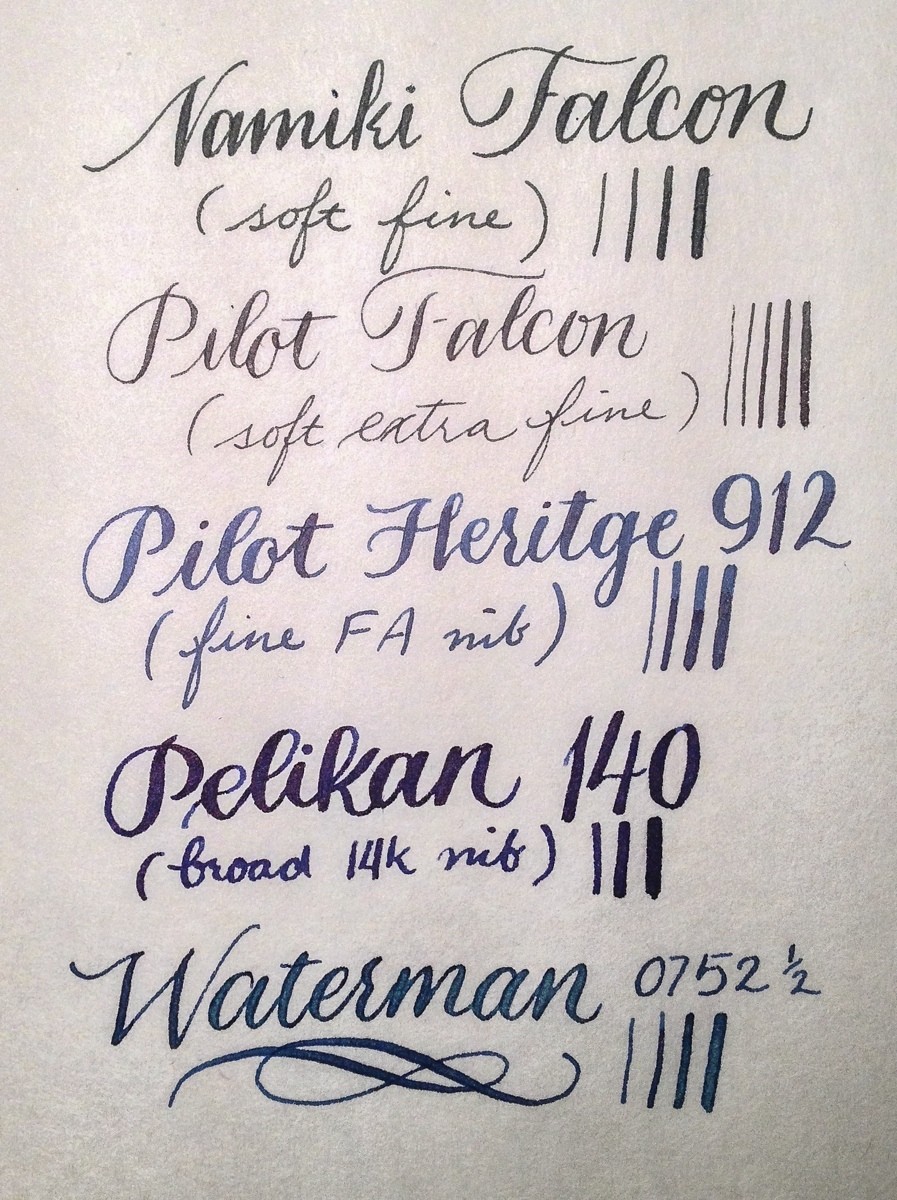 That namiki Sf Flex  must have been modified because they don't flex that much. I have one with SF nib and it is just a springy nib - wish I could "customize it" for flex but why should  one do that  when 1) Watermans and 2) Pelikans 140 are out there with burnt-in  (invented terminology, arising  from my burn-in of electronic module days in manufacturing) FLEX? That is a good, costly experiment. I won a Namiki Falcon, Pelikan, Noodler's,  Desiderata and vintage  flex Waterman pens? For flex? Waterman is the best choice, secondly, Desiderata. Depending on pockets, Desiderata can't be beat, but please, Presto Tenebroso, do not raise the price, just make mor eof them so I can buy another one. LOL

I can get 3X line width variation with my stock pilot falcon SF. Compared to my Waterman ideal 52, the falcon requires more pressure to flex. The falcon will also railroad if I don't slow down to allow the feed to keep up.

It is definitely more than just springy though. M200, lamy 2000, sonnet are springy nibs. Falcon is a level beyond that.

That namiki Sf Flex  must have been modified because they don't flex that much.

I promise you it wasn't. I have never been able to go beyond the springiness she is famous for, anything beyond is a risk to me. I wonder if a more "watery" ink on mine could make the trick or else, they come with different grades of "springiness" . I wonder if I should risk more. But congrats for your unusual experience!

I appreciate mhphoto's post because...I have more than 50 vintage flex pens, some Super Flex by anyone's definition, and I have written and drawn with them for decades.

I also have a Namiki Falcon, and-despite protests from many that the nibs are NOT flex nibs, or even semi-flexible-my Namiki is just as flexible as my 1950s Pelikan 140s....

If I want serious flex, I choose one of my vintage pens. But my Namiki is lots of fun as both a daily writer and as a sketch pen, gently yielding nice line variation. It is definitely more than a "springy" nib!

Update: With the stock Falcon nib, I find the ink makes a huge difference between being able to flex as illustrated in mhphoto's picture, or not (ie easy railroading). That probably explains the disparity between the differing experiences with the Falcon nibs.

My advice: Experiment with different inks with the Pilot Falcon until you find one with good "surface tension" that allow for moderate flexing.  Some inks just dont work with this pen resulting in railroad city!  With the right ink the Falcon nib can be a consistent good semi-flex writer (up to 3X line width variation with the SF nib).  I find some Montblanc inks work well like Permanent Blue, Irish Green etc.

Since this question seems to be about using a falcon for sketching and drawing the line variation or extent of flex that is desirable for writing seems moot.

The Falcon SF offers a certain degree of line variation which for drawing and sketching is useful as the artist may need thin or thicker lines as the need arises. As I understand it most artists may not need a full flex nib and the amount of control that a Falcon nib offers probably suits skating needs... It springs back quickly to its normal width hence that seems useful for artists, it offers line variation better than a Noodler's nib that are a beast too use...

I've read artist blogs where a Fude nib has been found to be preferred as by changing the angle of the pen on gets line variation... The Lamy joy also gets an honourable mention...

I would suggest that you invest in the resin version version of the Pilot Falcon, less cost than the metal version and use that.

It is an excellent pen and the nib spring which should give you enough the line variation for sketching...

Also tagged with one or more of these keywords: customizations, pilot, falcon, flex, sketching