167 replies to this topic

Status symbols? I dont know about Asia but in US  it is not much of a status symbol among people who can afford them. I asked my friend who is does finances for a living and works with the big boys. They don't care according to him, they just put it on and use it just as they do their socks it is just pen that other folks use at the office. An institutional inertia sort of.

I wouldnt pick any word there, as i dont agree with your argument.

For one, Montblanc has already weathered atleast 3 *big* global recessions, 2 of which have been during their modern incarnation as a purveyor of high-end pen products.      Nor do i think that the global slow-down is "status quo" but a discussion on macroeconomic trends is probably not called for.

While no company is guaranteed survival, truly high-end products often tend to weather recessionary influences better than aspirational products which are in the "entry level" of high-end, so to speak.   Bunch of studies on this that i can remember back from my B-school days but cannot think of any off the top of my head.      What is more likely to sound the death knell of MB is if they over-diversify their brand

As someone else pointed out - either in this thread or one of the other similar ones - companies that earn their place in the high-end pantheon generally do so on the basis of excellence in some category of the other:  be it performance, aesthetics, quality or refinement.     That is the important distinction that many people seem to ignore between a company like Montblanc and one like the recently-born-and-even-more-recently-deceased Conway Stewart, which also tried to play in the high-end market.

Contrary to what seems to be popular perception here, one cannot prance up and just sell a product at an excessive premium without any underlying basis for that premium.    There will always be some people who will buy into that, but for the most part, the premium associated with being on the high-end has to be earned.   Montblanc certainly has earned it, atleast as far as its target customers are concerned.


True bliss: knowing that the guy next to you is suffering more than you are.

Their recent annual report indicates a big drop in revenue attributed to a decline in the Asian market.  We will have to see how much longer they can keep their prices so high as the novelty wears off and the global economic slow down becomes the status quo.  Very much like the drug market in the US, MB is priced as high as the market will bear, not based on realistic costs.

NOVELTY? Do you actually know how long MB has been around? You should probably pick another word here, because 108 years isn't really novelty. Unless you're some sort of immortal or twilight vampire to whom a 108 years remains a novelty. MB has withstood the BALLPOINT pen revolution, numerous recessions, wars and is still thriving. Still a novelty you think?


Fountain pens are like weapons. They just make your pocket bleed so much.

It is 2014, a fountain pen is a novelty whether we like to admit it or not. Mont Blank built a big luxury goods brand, so I guess you can lump  in MB fountain pens with luxury goods.

NOVELTY? Do you actually know how long MB has been around? You should probably pick another word here, because 108 years isn't really novelty. Unless you're some sort of immortal or twilight vampire to whom a 108 years remains a novelty. MB has withstood the BALLPOINT pen revolution, numerous recessions, wars and is still thriving. Still a novelty you think?


Perhaps the original poster meant that in the flush of the economic boom, and the post recession recovery that has mainly benefitted the rich, that there are those who purchased all the supposed appurtenances of the upscale professional and they may abandon the same once things settle down and their tastes or sensibilities change. If, in other words, people decide that "luxury" goods are not the be all and end all, or if they decide to try other brands than Montblanc because they become intrigued with fps in general, rather than just status brands, it could have an affect on Mb.

That's how I took it, anyway.

Grace and Peace are already yours because God is the Creator of all of life and Jesus Christ the Redeemer of each and every life.

I got a decent deal of $180 for my Montblanc 145 (yeah... arguably off topic) and while it's a great pen and the favorite of my small bunch, there's obviously pens that can contest when it comes to performance with a fraction of the price.

For me, the value is in how much I enjoy writing with the pen if that makes any sense. There's something about a Montblanc and it's characterized design that is to love. I've never had anyone to show the pen to or pined for appreciation of it's "prestige" and I didn't buy it for that perfect world. In all reality I suppose it really is a silly purchase when it comes down to it, making me a sheep to their brilliant marketing most likely targeted at people like me.

All that being said... I'd still happily pay the same price again.

I'd have to really agree with this. No matter how many shiny Jinhaos you buy, Cheap pens will always look cheap. I don't think there is any getting away from that at the moment. There are well built and very functional cheaper pens (eg Pilot Metropolitan which is a fantastic value pen) but when it comes to the feel and overall aesthetic, the cheaper pens will always look cheap IMHO.

I agree with you on this point when talking about modern pens.

I think though that most vintage antique pens, including MB tend to be cheaper than modern pens and even the MB ones look cheap.

Look at that nib.   That's why Montblanc. 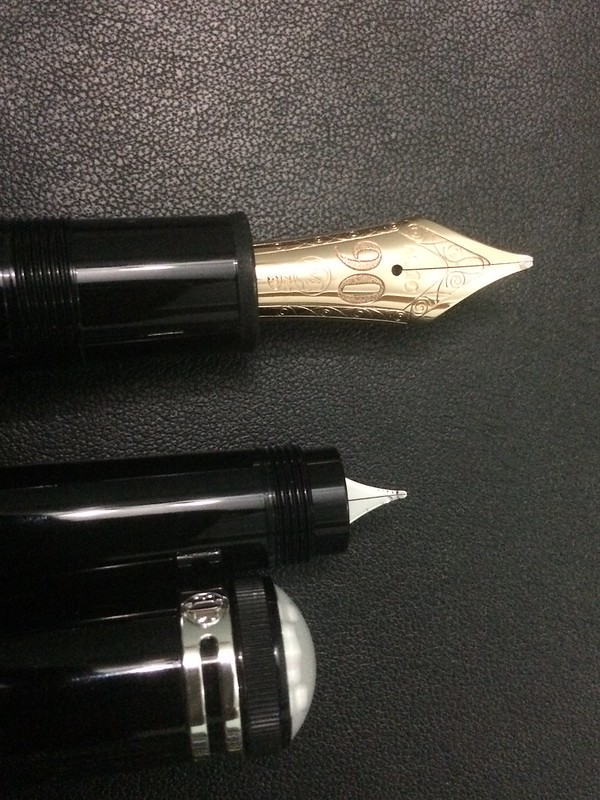 True bliss: knowing that the guy next to you is suffering more than you are.
Back to Montblanc

Also tagged with one or more of these keywords: pelikan, montblanc, visconti, sailor, pilot, expensive, overpriced