52 replies to this topic

Here are some Bayard pens

1922  he creates Panici Fréres with his nephews. The fountain pens are engraved PF, two nibs crossed on an oval.

1924 - Etienne Forbin dies. Panici brothers, move for bigger premisses to control all the steps needed for the making of a fountain pen. They hire mainly women, reputed to be more meticulous than men. Every fountain pen is hand tested.

1947 - Commercialization of the 'Excelsior, interchangeable nib - furnished with the fountain pen. A succes.

1970 -  Bic's arrival, ends Bayard, outmoded by the changing and the expense that would represent.

From left to right: 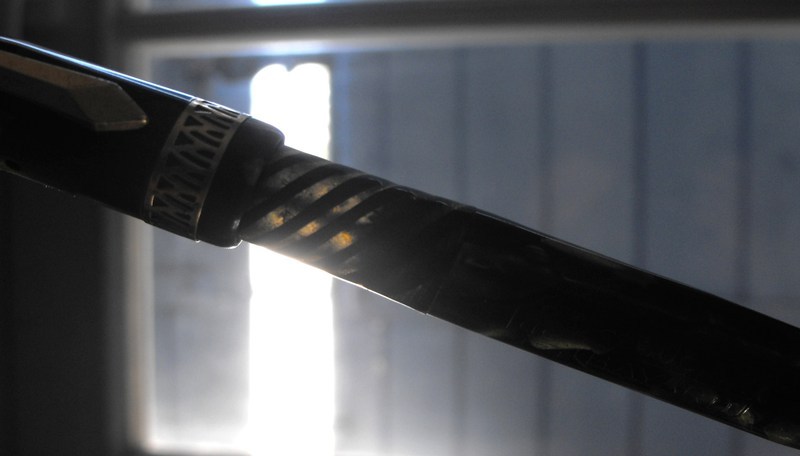 Exquisite. Thanks for sharing.

Looking for: Camlin pens (minus SD/Trinity/Elegante)

Wonderful collection. Thank you for sharing.

Beautiful pens, thanks for sharing. The detail on the nib of the special 8 is amazing

Bayard pens are one of my favorite vintage european pens! Thank you for posting these.

They all write beautifully, and their nib is of utmost smothness.

I want them all.

Thank you for sharing, they are magnificent.

Thank you for sharing, they are magnificent.

As are yours, especially Le Vue Claire

Unfortunately, the Bayard pens are notorious for deforming celluloid.

You can see them on ebay occasionally, often unused & still sitting in their original boxes, with their tops and ends shrunken - these are sad cases & probably only worth their nibs

Btw, I`ve found them all on ebay; the most expensive one cost me less than a TWSB Mini, the Le 4 was 14 Euros incl. shipping!!

One of the reasons I can`t bring myself to buying new pens ...

I have a NOS Excelsior which has the cap a little deformed. The funny thing about it is that it is quite regular, hence looking as if on purpose. Like a ornement. It makes it quite unique.

Any how I use them all, theirr nibs are excellent, and their response immediate, even if you don't use them for weeks.

I also try to have at least one of them in circulation.

The nibs are usually fine semi-flex (the only one with a steel nib I have is the green Excelsior which is VERY flexible).

A couple of mine (like the green one) has a slight bulging around the lever, but it`s not so bad that it bothers me.

Oh, and I don`t care so much for the post 1950 Bayard`s; at that point they begin to lose their distinction (for me at least).

PS: I buy pens to use them & never meant to collect, but I love these French 30ies & 40ies pens so much, that I now I have a small collection of Bayard`s (all of them in the picture)

& Stylomines (which I slightly  prefer to the Bayards)

I also try to have at least one of them in circulation.

I have allways 3  filled and ready.

The only gold nib I have is the Vue Claire.

I will be receiving one todai, or tomorrow

Bu I am allways looking for the coloured one, sauch as yours. Hard hard

Oh, and I don`t care so much for the post 1950 Bayard`s; at that point they begin to lose their distinction (for me at least).

I see what you mean. I don't fancy the Sovereigns and others.

PS: I buy pens to use them & never meant to collect, but I love these French 30ies & 40ies pens so much, that I now I have a small collection of Bayard`s (all of them in the picture)

Those are exactly my words.  All I possess, for now, are in the picture.

I have the same attitude. I don't care about the value, as long as the pen "touches" me

& Stylomines (which I slightly  prefer to the Bayards)

I have also several Stylomines (difficult to get), and one or two Mallat

I enjot Stylomine as much as Bayard. But I like the fact that Bayard is even more "confidencial" than Stylomine.

Three Bayards straight from sales, and quite a lot of work to do (including finding a clip for the 'tortoiseshell'). They're Excelsior, a cheaper range with steel nibs, but delightful celluloids - I particularly like the 'tortoise' with the light edges to the flakes giving it a quite crazily jazzed up appearance. Seems to be the same celluloid as the Speciale 8 above. The two candystripe ones turned up within a couple of weeks of each other.

By the way, is it just me or does the Vue Claire have a very Eversharp Doric vibe?

BTW, A friend of mine just achieved a Bayard "Le Super"

Looks the pen features a sort of "vacumatic" filler system, since there is a long breather tube in the feed.

The rubber element is however missing, does anybody has an idea how the filling system works?

Thanks in advance for your valued help !

Thank you for your compliments.

I have sent a message to Polanova.

As I said, I think Chris pen is the Superstyl but...

We shall see if Polanova can help.

Fountainpagan, polanova and amk, beautiful Bayard collections you all have! Exquisite celluloids.

amk,nice catch. Where do you get those? I find so difficult to find Bayard's...

If you mean, Bayards are more difficult to find than Stylomines: Based on my 10 months-long observations on ebay, I`d say 50:50.

I hope your black one is in a nice condition

Apart from Bayards & Stylomines I only own a Méteóre with a divine broad stub nib.

I also had a tiny Matcher Colombes in blue cracked ice celluloid (trés magnifique!!), which I gave to a friend (I MUST make a photo of it !!)

I got most of the pens in february from a French seller who had a dozen on ebay, 1 week apart. At the time I was hoping to catch at least one.

To my surprise there was no serious bidding & I ended up with 5 pens (guess I`ve been lucky!)

It looks like we have a few things in common

You know that your posts on Bayard pens had a major influence on steering me towards those pens!

Maybe i should make a photo of one of my Bayards, lying on top of Mysterium Coniunctionis (did I get that right ?), sort of like a homage

I actually do have another Excelsior minus rings, clip & clip-cap - impossible to find ersatz, though.

I also find it impossible to tell the difference between the Excelsiors, Le 8, Le Superstyl & so forth ( Le Superluxe for example does have especially nice purple/red celluloid, is bigger than the others, also holds more ink but is curiously shorter uncapped than the Excelsiors!

As to the filling system of the Superstyl: Like all of my pens they`re lever fillers. I know that Bayard also produced Safeties, but during the 30ies and 40ies? I don`t know.

I did research the brand half a year ago & found one site which had more detailed informations. I`m very sorry that I did not find it again at short notice.

I also had a look at the French forum (using google transl., as my French is only rudimentary

the French seem to prefer more teutonic brands, but someone there has a collection magnifique des Stylomines 303 (worth having a look!!)

Here`s another picture which I did a few months ago when I got my new camera (still new at FP photography - some of the nib`s tips are cut off), all lever-fillers (2nd from right: swapped nib with a Franklin-Christoph Cursive, as I didn`t need it on my Pocket 40 but wanted to use):

While I`m at it, a couple more: