This pen was purchased from a purveyor of fine pens based in Rhode Island (RI), USA. I went to college in Providence, RI, but did not realise at the time that the famous A.T. Cross company was founded in Providence (1846), and had its global headquarters just 10 miles away in Lincoln, RI. After solely collecting Japanese pens for years, I decided to explore the offerings from the pen makers in other countries. Hence, last year I started to put together a collection of flagship pens that was representative of the major brands in the market. From various sources (including my parents who used fountain pens in school), I learnt that Cross made a quality pen. Hence I decided to purchase a NOS Cross Townsend in the classic 18K rolled gold finish for my collection. Why did I choose this finish? I do not shy away from gold trim on my pens - in fact, as a traditionalist at heart I will choose gold trim over silver trim if possible, because gold is the traditional colour for pen clips and trim rings. 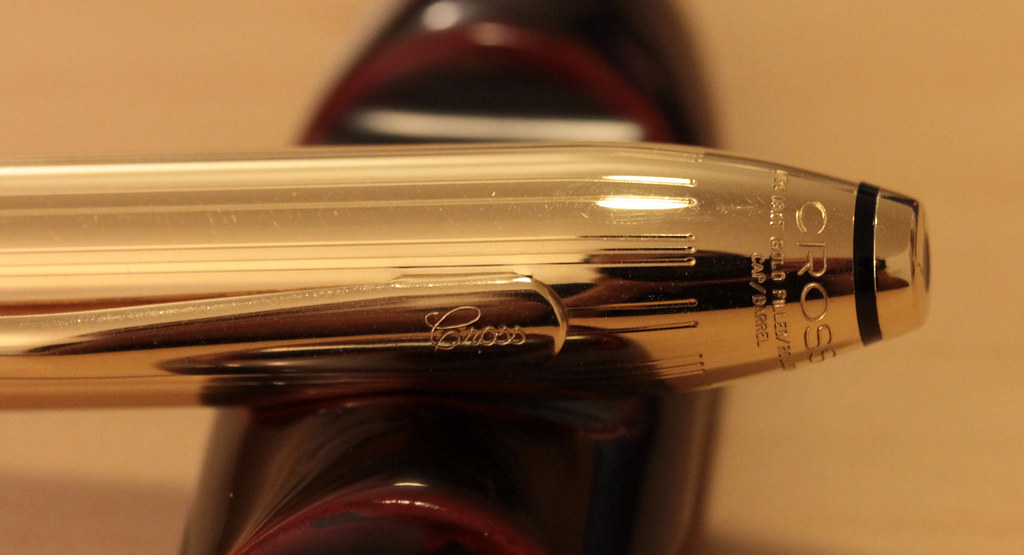 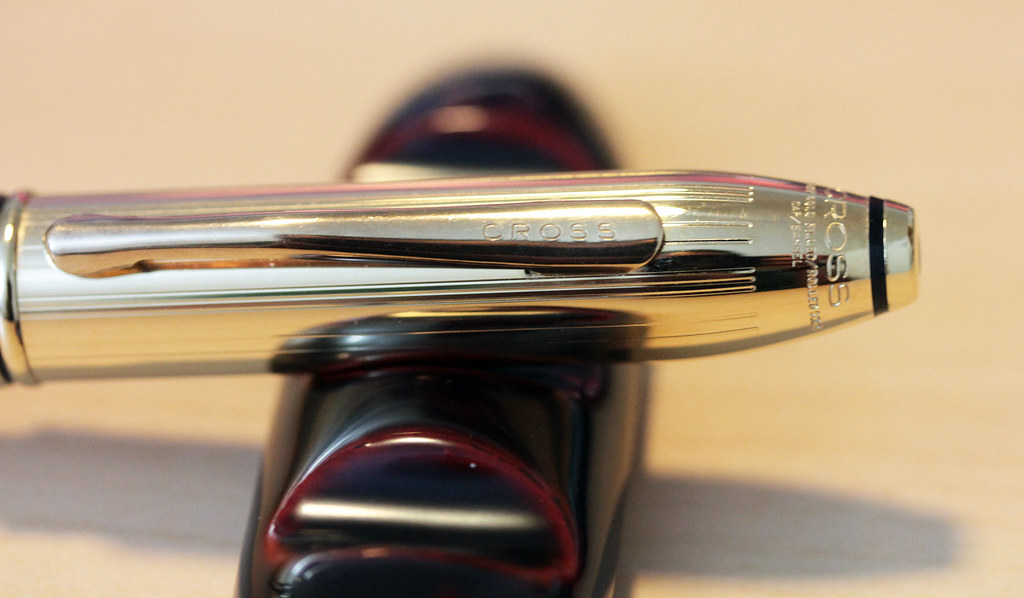 The pen is made of brass with an 18K rolled-gold finish, a very durable and thick gold-plating finish. It is unlikely that this pen will see brassing during my lifetime if I treat it with care. The pen cap initially came with a clip sporting the cursive "Cross" script. Because there was a significant scratch on the top of the cap, I exchanged the pen cap, and the new cap came with a clip sporting the block "Cross" letters. More importantly to me, both caps did not indicate the country of manufacture of this pen. It appears that Cross pens were originally made in the USA and Ireland, and later on in China. To the best of my knowledge, the country of manufacture used to be clearly marked below the gold hallmark on American- and Irish-made pens; however, Cross removed the country of manufacture when they started manufacturing in China. Although I have no prejudice against Chinese-made pens (as long as the pen is well-made), I was a bit disappointed to find no indications of the country of manufacture on this pen because it was specifically advertised as being made in the USA.

The pen has a slip cap that fits tightly over the nib section. Although this works well for preventing dry-out when the pen is not used for a period of time, I wonder if the plastic clutch ring inside the cap is robust enough to withstand a lifetime of use, given the not-inconsiderable force needed to uncap or cap the pen. Because Cross offers a "full perpetual lifetime warranty guarantee" on all their writing instruments, however, I figure I should be covered if I happen to break the cap while using the pen.

The pen comes with user-replaceable nib sections which simply unscrew from the barrel. Some users have complained that the nib section unscrews too easily from the barrel, and I concur. There are two disadvantages of such a tight slip fit between the nib section and the cap: first, the cap tends to create a partial vacuum during the action of uncapping, drawing ink from the pen onto the nib and into the inner cap (ditto for capping - the force required for capping can cause ink to spurt from the nib into the inner cap); and second, the tight fit of the cap can cause an inattentive user to inadvertently unscrew the nib section from the barrel instead of uncapping the pen. In actual use, however, I find that the pen construction is adequately robust. Although the pen diameter is a little too narrow, I find the length to be just right. I prefer using this pen unposted because posting the cap causes the pen to be top-heavy.

The pen uses a cartridge/converter filling system. Nothing special, just that I had to purchase the (green) push-in converter separately. For the cost of this pen, Cross should consider including a converter in the package. To be fair, the reseller provided a lifetime supply (to me) of proprietary Cross cartridges with the pen (~twelve boxes of blue and black, six cartridges per colour).

The reason why I use fountain pens is because I love the feeling of a nib gliding across the page with minimal pressure, leaving behind a luscious line of liquid ink. The BB nib that came with this pen was adequate - even a little springy - but did not meet the minimal pressure requirement that I impose for all my fountain pens. Don't get me wrong - there was nothing fundamentally wrong with the nib or how it was adjusted before leaving the factory.  I also like my nibs to write well at a variety of angles to paper - from near-horizontal to near-vertical. This BB nib did not satisfy, so I placed the pen on the Classifieds where it sat for a couple of weeks, not attracting a single message.

Fast forward a couple of weeks to the San Francisco Pen Show last week. I originally got Mike Masuyama just to work on grinding my Pelikan M1000 M nib to a cursive italic, but then I had a brain wave. I asked him if he could grind Naginata-Togi nibs, and he replied in the affirmative. So I took out my Cross Townsend with the BB nib and asked him to make it into a Naginata-Togi M nib. Mike Masuyama used to work for Sailor where he learnt all the tricks of nib adjustments from the Nagahara father-and-son duo, so I was confident that his nib wizardry would make me fall in love with my Cross Townsend again. 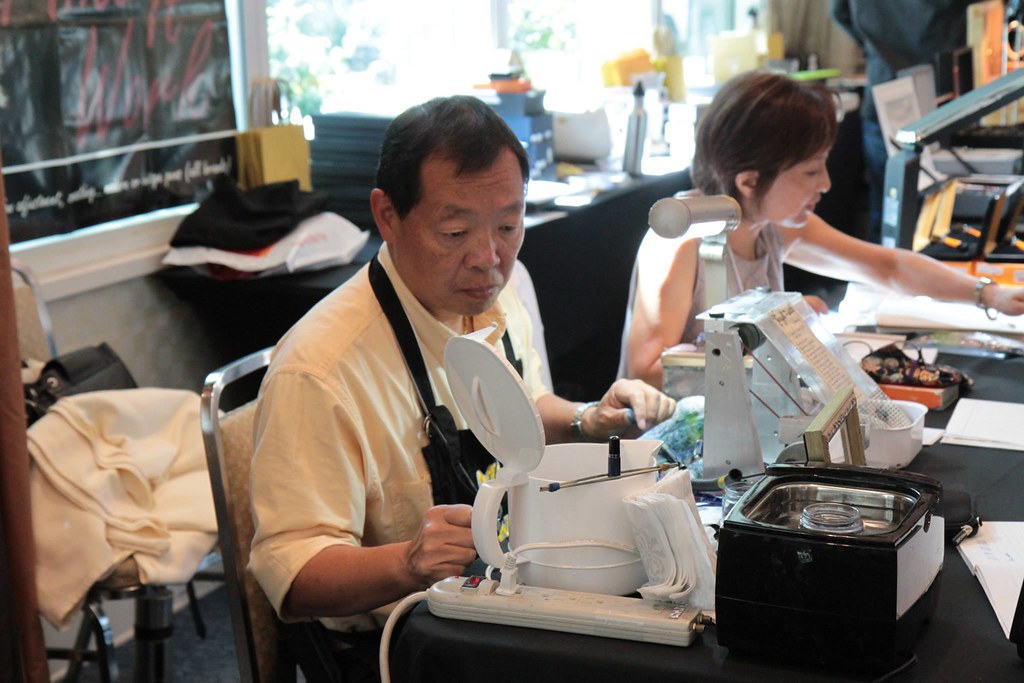 Mike Masuyama and his charming wife. 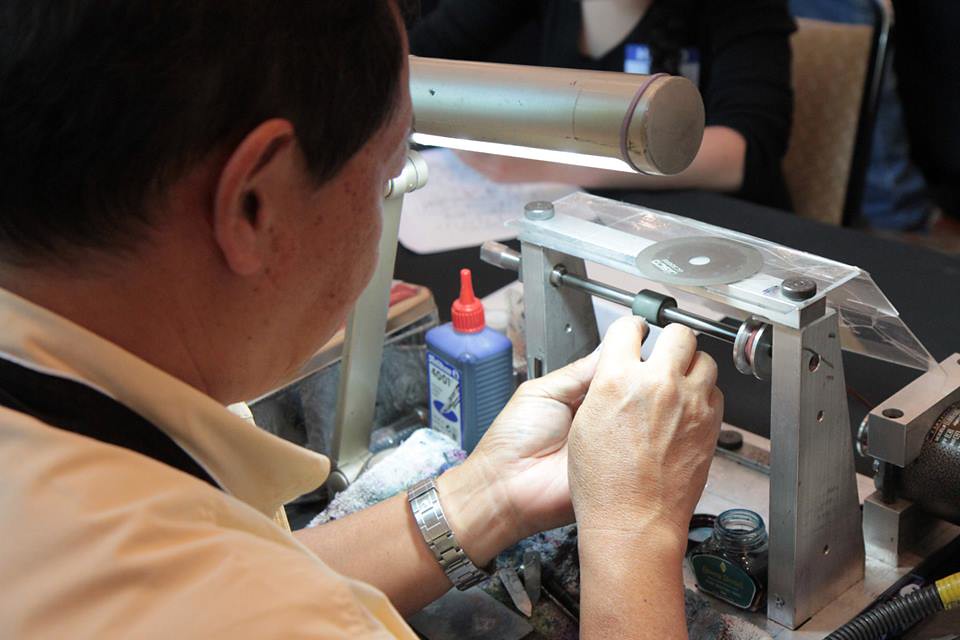 Mike knocked out the nib from my Cross Townsend nib section before proceeding to expertly grind it. He said that the nib and feed were made by Pilot, which was a surprise to me.

The results of the nib grinding? Here are some before and after photographs. You be the judge. 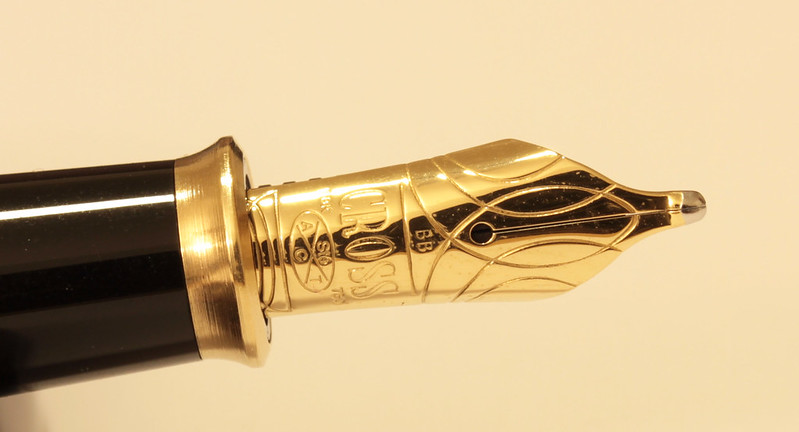 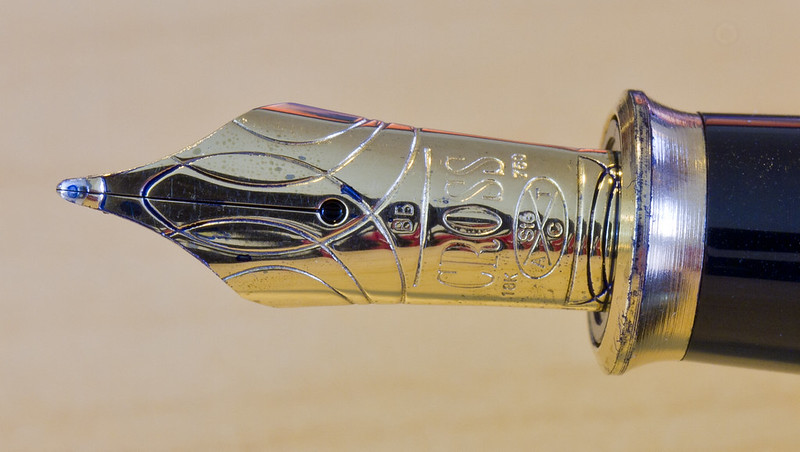 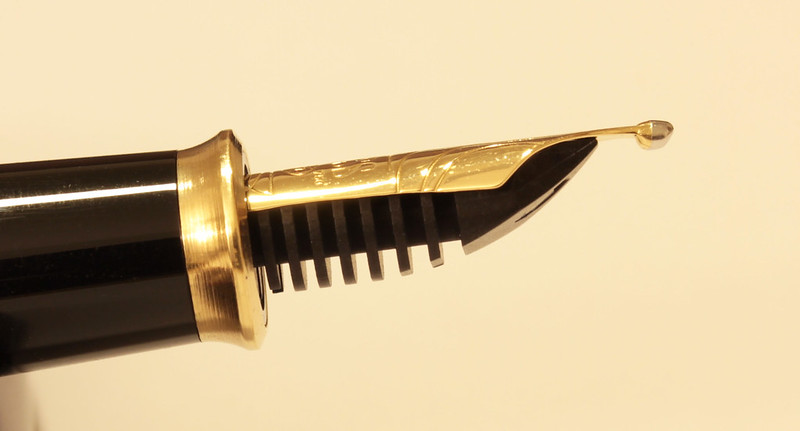 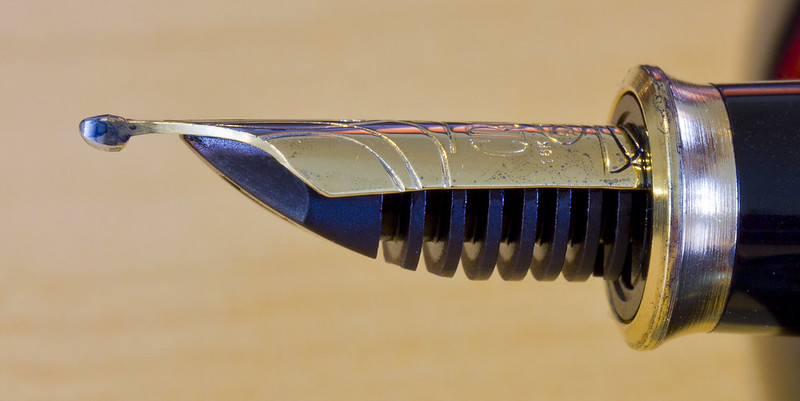 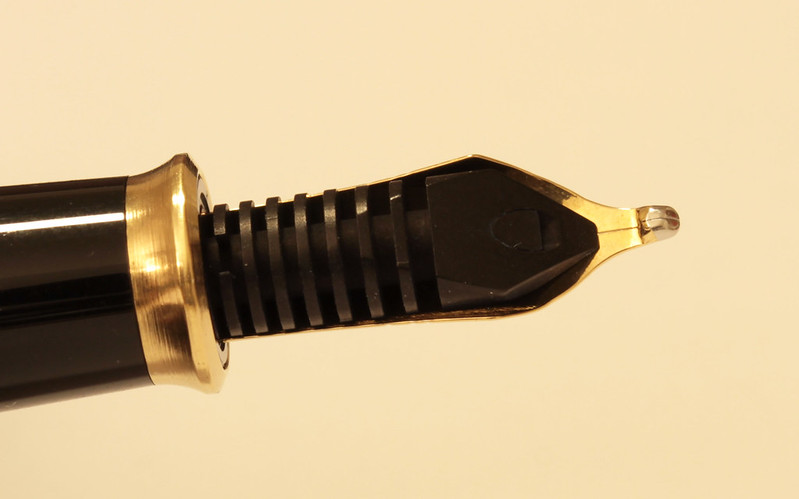 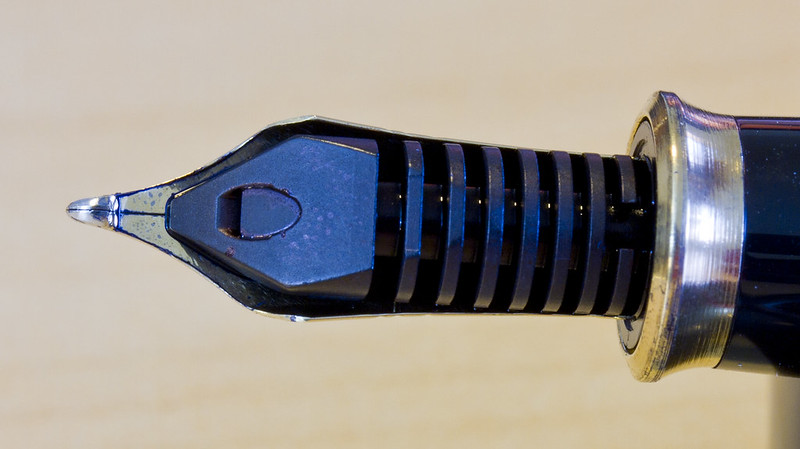 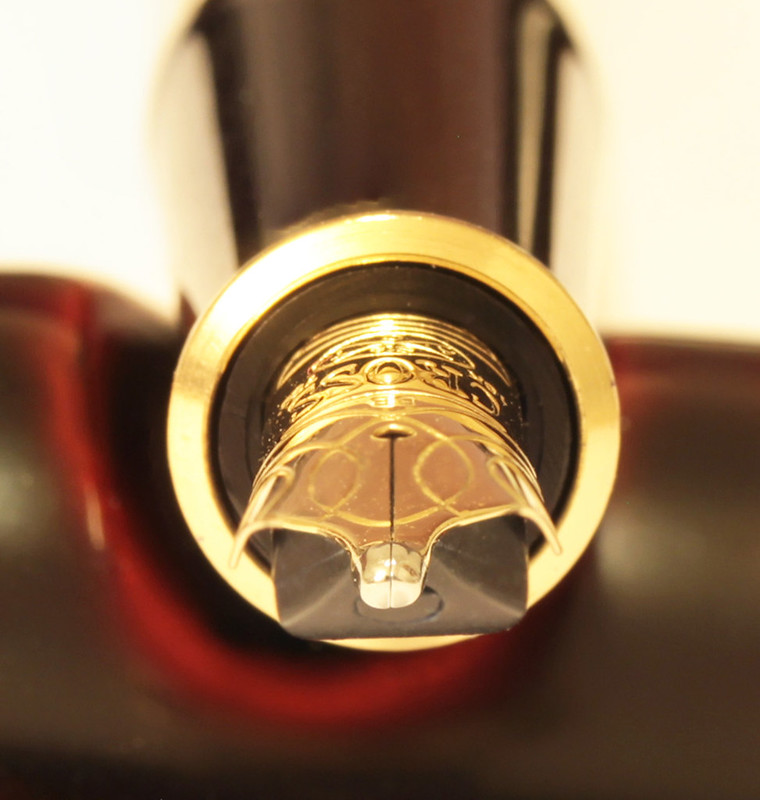 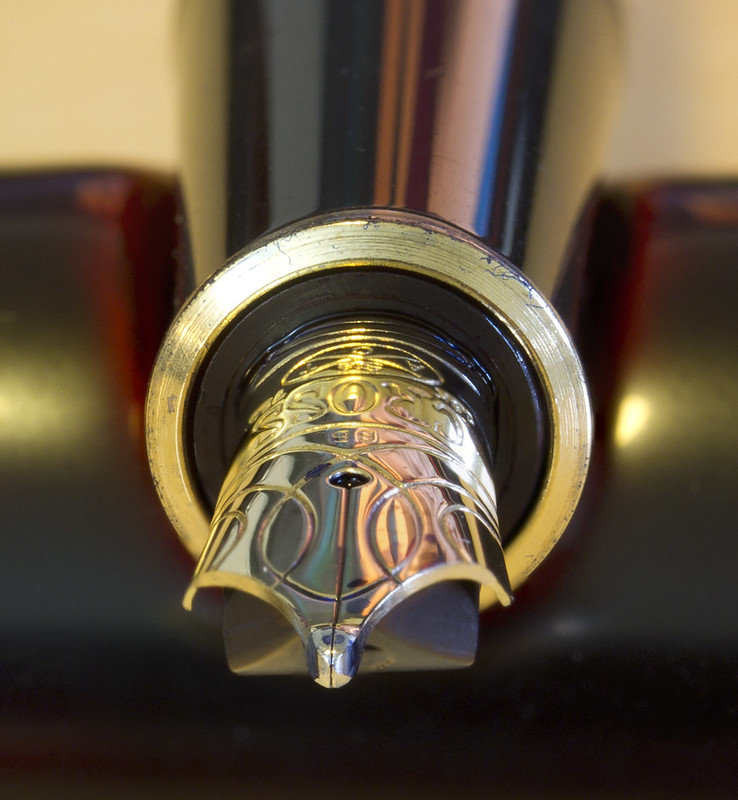 More importantly, how does it write? This Naginata-Togi nib writes well with zero pressure at a variety of angles, even upside down. I have been using this nib for the past week to write Tang Dynasty poems and the pen has performed admirably. For all its idiosyncrasies, I am confident that this pen will stay in my rotation as I struggle to achieve the calligraphic strokes that Mike demonstrated so effortlessly. 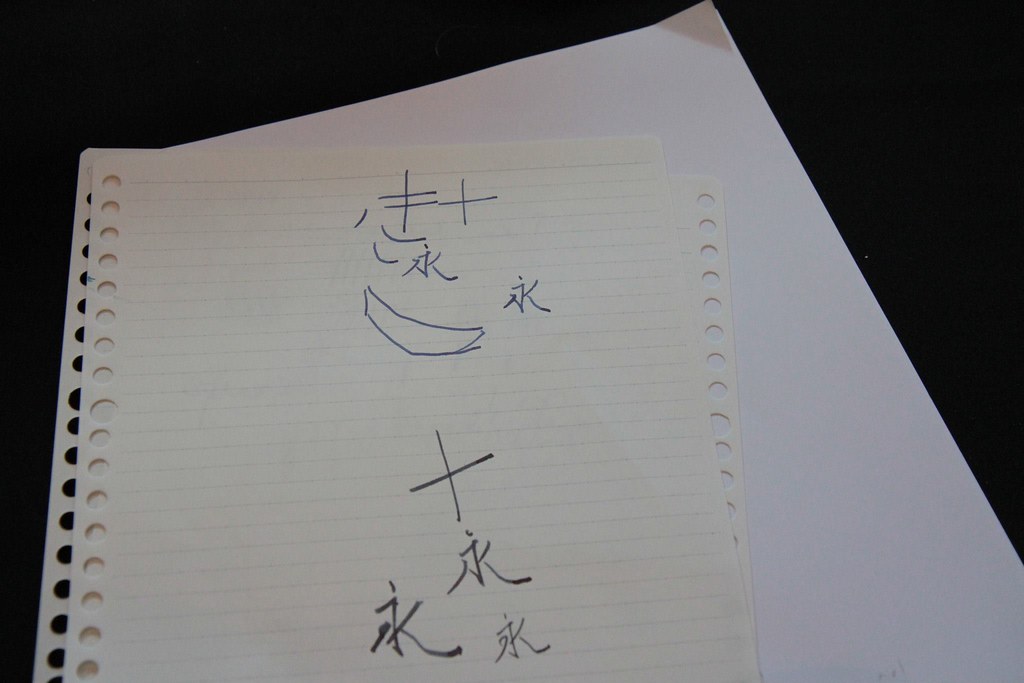 I am a big fan of Cross Townsend fountain pens and think they are under-rated. I have a Townsend with a BB nib and love it for its wet flow and stubbish qualities.

I think the rolled gold version is certainly the one to have, although the sterling silver godron/pinstripe that I own is my favourite model.

Beautiful pen and excellent review. But I was quite surprised and shocked that Pilot made the nib and feed system. I actually also have a black Cross Townsend and was my true proper expensive fountain pen in which I bought bit over twenty years ago here in Melbourne Australia. I actually bought the set with both fountain and rollerball both black with gold trim, but my fountain pen has a 14k nib and not 18k, but I'm sure the Gold and Stirling silver Townsend's have the 18k nib.

This was a very interesting review in my opinion. The pictures are nicely done. I only wish there were a bunch of before and after writing samples. Thank You - David

Thank You, shuuemura, for an outstanding review!  And Congratulations to you on your nice pen!

Mike-It-Work is Michael Masuyama, and he is an exceptional person, nibmeister, and repair expert.

Over the years, Cross has outsourced the nib/feeder assembly to both Pilot and Pelikan, depending on the particular model.  Townsend line was always Pelikan nib/feed, made to Cross specs.  Don't know about current production, as manufacturing operations moved overseas approx. 8 years ago.  Additionally, A. T. Cross pens/accessories has a new owner as of last year.

Actually, the fact that Pilot made them is not so strange, Cross has a history of working with them (Verve, others)

Also tagged with one or more of these keywords: cross, townsend, sailor, naginata-togi