Show Off Your Esterbrooks!

Here are a few of my girlfriend's Esterbrooks.  She purchased her first pen, a green dollar pen, from the Andersons at last year's DC pen show.  Some are additions she purchased, others are Christmas, Birthday, and Valentine's Day gifts. Needless to say Esterbrooks are addictive.

Nice collection!  I love those nurse's pens.  I suspect I'll be seeing at least one of those, and a dollar pen, in my collection next year.

Great pens. I really like the collection she's put together.

Every now and then, I produce a photograph that is sharp and detailed, showing that there is nothing wrong with my low end Fuji.  This photo is not that photo.  Still, it shows...

Didn't really mean to get this many Esterbrooks, but after deciding that I had enough, they kept on showing up in batches of other pens that I wanted.  The blue SJ holds my favorite nib, a 9788, and is the most recent one to have been inked.

"So convenient a thing it is to be a reasonable creature, since it enables one to find or make a reason for everything one has a mind to do." - Benjamin Franklin

I love that grey dollar pen!

Here are a few of my girlfriend's Esterbrooks.  She purchased her first pen, a green dollar pen, from the Andersons at last year's DC pen show.  Some are additions she purchased, others are Christmas, Birthday, and Valentine's Day gifts. Needless to say Esterbrooks are addictive.

Very nice. Kudos on the photos as well. I really like bandless Dollars. I have only one banded Dollar, in BHR, but I wouldn't mind a bandless one (or three?) someday.


Happiness is an Indian ED!

Majorworks, thank for the complements on the photos.  While I gave my girlfriend a couple Esterbrooks for Christmas last year, she gave me a photo light tent. The tent makes taking well lit pictures so easy, even I can do it.

Viewing other people's insanity makes me feel  better about myself.  Thank you, everyone !

I think you're only Really Insane, if you Can't recognize that you are.

I think you're only Really Insane, if you Can't recognize that you are.

LOL.  That said, I have another 3 ridge transitional J coming in the mail.

I got what sure looked in several pics like a Root Beer J. It's not, it's a Copper but it's Heavily Root Beer Streak laden.

It's gonna make Someone very happy. It should clean up nice. I'm thinking I'll put a quasi-Stub Venus Broad nib in it. 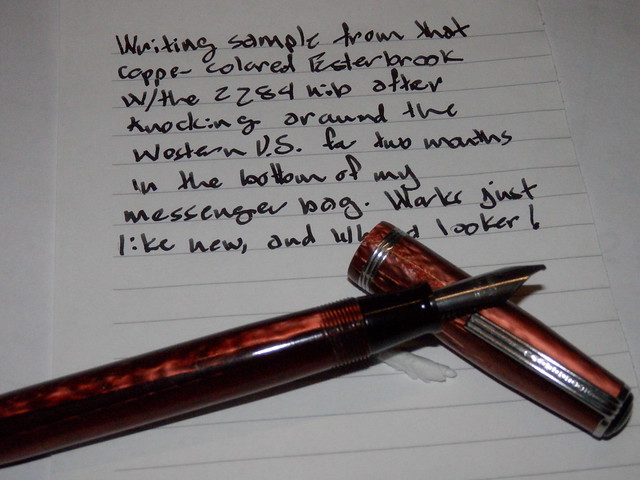 I thought I had lost this one, (fully 50% of my Esterbrook stock!) after just a month or so of 'getting acquainted'.

Starting in July I made a few trips around the western US; Arizona, Wyoming, Idaho, Utah,  not a lot compared to some but let's just say I am now pretty darned good at tying my shoes while running down a p0lished linoleum corridor filled with mobile obstacles.

I'm in between trips just now (leaving for Vermont early Sunday am) so took time out to change up the rotation, and in doing so I realized this little beauty was nowhere to be found.  I turned my messy office upside down (once to see if, ... and then again just to make sure).  No luck. I then sat down and thought, slowly it dawned on me that this one had made that first trip to sweltering AZ in July.  I went through my carry on, my computer case, my messenger bag but again, no pen.

Then earlier today the battery in one of my hearing aids started to die (I get a little carillon tune in my ear when this happens).  So I went to the secret zipper compartment in the bottom of my messy-enger bag and LO!, what should appear but my lovely little copper Estie swaddled in a snack size zip lock bag.

Isn't it ironic how much you miss your water when the well runs dry?  All the worse in this case because this little pen writes like a champ and is a real looker.  That messenger bag fits under the seat so you can be sure it got kicked half way across the western US, quite a test for an old fountain pen.  So fearing the worst but anxious to know, I pulled it out, wiped the ink off the nib, swabbed out the cap and put pen to paper.  Off she went like a pup fresh from the kennel.  It was as if this pen was writing itself!  Never skipped a beat, you would have thought it had been sitting in the pen stand on the desk overnight.

As a general rule I don't travel with expensive, or 'special' pens.  I broke the rule this time because I had only recently acquired the pen and was still fully engaged in the infatuation phase. I'm sure you all know what I mean.  I considered taking it with me to Vermont, but that's not going to happen. Airplane overheads and seatback pockets, rental car consoles, motel desk drawers and restaurant booth cushions are all something like black holes for me.  I have my traveling act pretty much together but it is not uncommon to find airport paperbacks, water bottles, packs of gum, and cheap sunglasses mysteriously missing from time to time.

Likely I will have a trusty but expendable Schaeffer No Nonsense or something similar with me.   But let me tell you, today was a very good day even if I am staring at a cross country flight on Sunday.  It gets better, the Hawks played last night so I won't think much about football while in the air.

happy as a clam in sand I would say.

Reminds me of a few adventures my first Esty went through.

Your Estis are beautiful.

Some have quite a collection!!!!!

Here are mine: a very small contribution

By the way, could you tell me where could I find a flexible Esterbrook, or compatible, nib which will not cost a fortune, please? 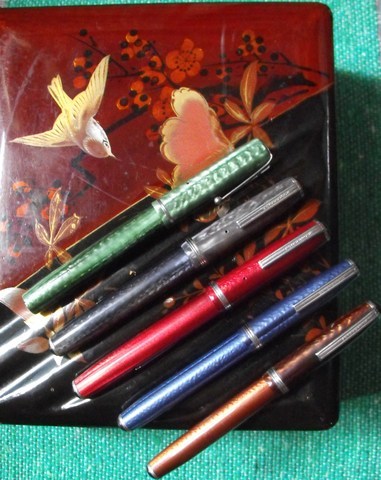 Here's a quick shot from my iPhone.  Note the missing cap on the transitional black Esty...

If anyone has a spare, I would be interested in discussing...

A few more of my girlfriend's Esterbrooks. Funny, a couple of birthdays, holidays, and pens shows and this happens. Good thing these pens are affordable.

LOVE the green in the first photo !!

Thanks. It has stripes instead of the usual marbled plastic. It's commonly called an icicle. Freshink has a few in his photo, too.

Some of mine. The number has pretty much doubled since I took this photo.

Very nice collection. Is the fourth pen from the left a Visumaster? Does it work?