My first repair, and the first topic I've started. Whoo!!

I found this pen at an antique mall for 50 cents (along with a couple Welsharps that are still needing some fine tuning.. ahem.) Anyway, I'm rather pleased with myself. I got it all cleaned out, slightly polished, re-sacked, and adjusted the nib to the best of my ability. It has some dents on the tines that the previous owner must have put there in prying the nib out, but it still functions. I had to gently close the gap between the tines as well, as the flow was extreme. Now, this is a nice little writer. A slightly hard-starter after letting sit overnight while I sleep, but once it gets going again, it doesn't quit.

Using the normal side of the nib yields a bold line I'm not fond of, but turning the pen upside down and using the back gives a line with some interesting variation! So while this pen isn't perfect cosmetically, I've grown rather fond of it. The plastic is a dark navy blue, not black as it might appear in the photos. The ink used is Poky black, a rather cheap and feathery ink, but this was the initial post-adjustment test where I didn't possibly want to waste my better inks if the nib started super-flowing again.

To note, I'm not entirely sure what model this is.. (Does anyone really know with Wearevers?) I call it a "Taperite Citation" type due to the shape of the section and size of the nib, though it certainly isn't as nice as other copies of the Waterman design. Ah well, I enjoy it whatever model it is. Edit: It's a Supreme. Still enjoying it!

And here you can kind of see the denting in the tines.

I wish! The cap definitely has "Wearever" printed down the clip. So unless someone switched caps...

I wish! The cap definitely has "Wearever" printed down the clip. So unless someone switched caps...

Ahh, OK...I wasn't aware that Wearever did knock-offs of the Waterman Taperite. Probably a good thing for your restoration project. My Waterman Taperite required a trip to a professional restorer to get the section removed and the sac replaced. The Wearevers I've worked on are a snap in comparison.

Anyway, congratulations on a nice job and for rescuing a pen from the junk heap!

And that's not a Waterman pen at all. Here's my Taperite 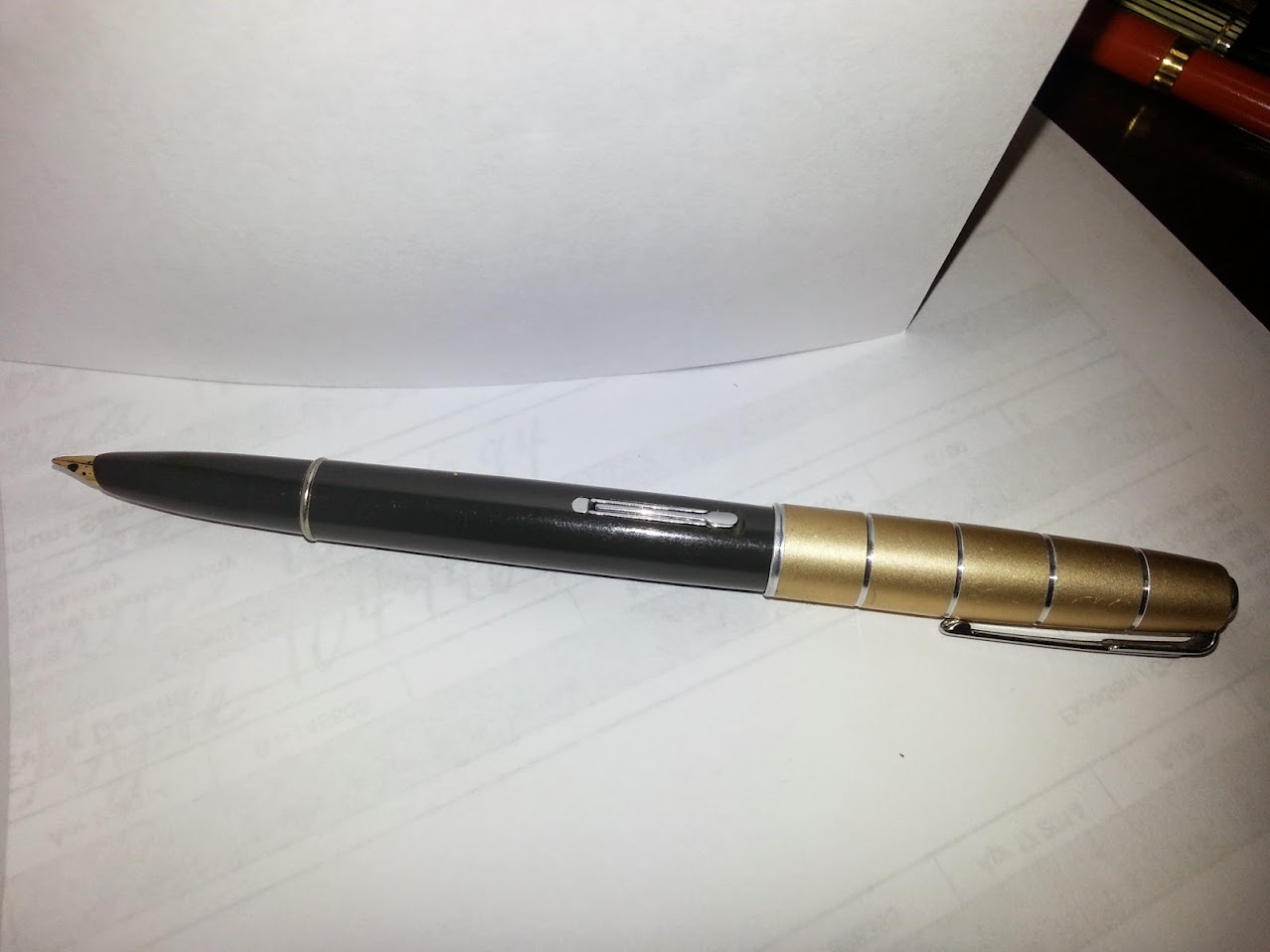 And that's not a Waterman pen at all. Here's my Taperite

Yea, Wearever had a pretty blatant copy of the Waterman Taperite, and it's commonly called the "Wearever 'Taperite Citation' type," at least in my Google findings when I was first researching this pen after buying it. Thus the title of this topic, and sorry for the confusion. But my Wearever appears to be a combination of the Bullet and "Taperite Citation" type, what with the cap, section, and nib shapes. With such a mass producer of cheap pens, a hybrid style is to be expected.

And a very nice Waterman Taperite, there!!

It's a Supreme (because if it costs 29 cents, you'd better give it a GREAT name!).  I've got one and it definitely writes and, small plating foibles aside, looks like a lot more pen than it cost.

It's a Supreme (because if it costs 29 cents, you'd better give it a GREAT name!).  I've got one and it definitely writes and, small plating foibles aside, looks like a lot more pen than it cost.

HAH!! That's hilarious. Well, at least I know what it is, now.

Wearever pens were the kings of "get the look without the loot".  I have a Wearever that looks like a striped Duofold, one that looks like a Parker Challenger and last year on eBay (though I didn't get it) I bid on a pink one that was chaneling a Sheaffer Skripsert.  People wanted the look of an expensive pen and Mr. Kahn was happy to oblige.

My first repair, and the first topic I've started. Whoo!!

Warning - both activities are addictive. OTOH they're also fun. Welcome aboard!

I ended up getting a few of these pens in a "lot" buy. Two of them are in great shape and currently cleaning them up a bit. Not a lot of info about them-One of mine looks exactly as "uncle red's" and one that just has a gold cap and interesting deep green with a slight iridescence. Cap is gold with a series of fine lines towards the bottom. All the metal plating is in near perfect shape. Learning to repair these, a number of Parkers and a host of others.

Enjoy the forum. Cheers to all

PS-I just noticed the "other" pen looks like the same as what TeaHive posted.

Congrats on the repair. As was said, repairing "project pens" can be addicting. I enjoy turning a dingy trashed pen into a nice working pen. Some of these project pens have really nice looking plastic, once you polish out the scratches. The nib looks odd. The pix you show, the gap between the tines is really WIDE. One thing that I discovered is ALL of my Wearevers, so far, are really wet writers.

Also tagged with one or more of these keywords: repair, restored, wearever, lever-filler, lever, junker