So here's the one I made for my mom. I have a bittersweet relationship with her. It's sad really, and not something I want to go into here. But she's moving away and has almost nothing and I wanted to give her something to have as a keepsake. It helps that she's one of the few people I know who uses a journal regularly, even if it is page after page of repeated once sentence screams at times. Anyway, I made her this and had my kids all write her a note, and put some photos of our family in the pocket for her to take with her.

I had a problem with one of the strings snapping. It must have been frayed before hand because I've tested this stuff (#3 crochet thread) and really can't break it by hand without hurting my hands. It snapped off right at the stitching on the spine as I was attaching the back cover, and I actually had to pick at it awhile to find the end, and then pick it back some to get enough free cord to tie off. 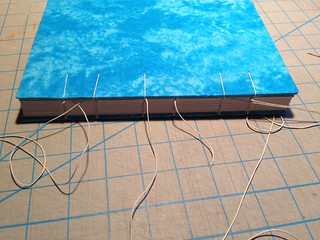 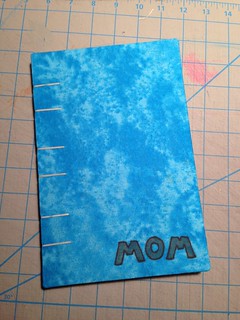 I've perfected the hinges. I've found i don't even have to glue the top part of the hinge to the front of the pocket, the paper holds together really well, just being nested. 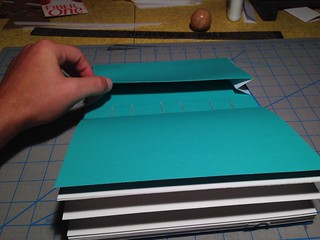 I don't like the bristle brush I'm using for glue. It spreads well, but it sheds bristles. I think they're horse hair. You can see them embossed under the fabric. 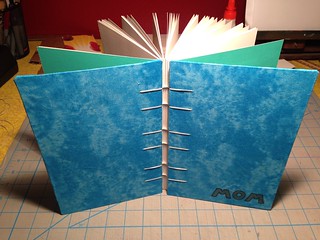 This is the first one I've done that I've done the signatures almost exactly as large as the covers. Less room for error but I like it. 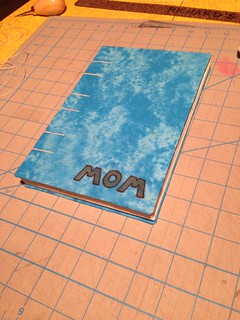 Coveres are notched for the thread. I had a little blowout on the bookfly on the far left. Resulting from an unexpected snag when pulling the cord through. 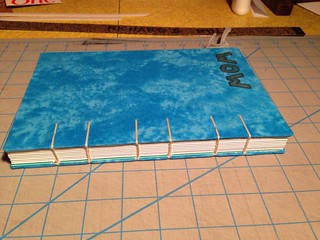 Anyway, 8.5x11, or near enough. 9 sigs. Silver crochet thread, had some tinsel wrapping on it, but I stripped that away after failing to get it to wax without snagging. With using the cutting matt for all my measuring, I'm not really taking exact measurements so much as trimming things until they fit and then using the first one as a template for whatever comes after. My lady thought the "MOM" on the front was a bit rough and spoiled the look of the notebook, but with it being a parting gift to my mother I thought the hand drawn letters a nice personal touch nostalgic of ages gone past when I was a youngling.

Made a couple more.

Small one that was meant for me but my lady showed interest in it so I let her have it. No pocket, due to size. I did dual colored stitching. 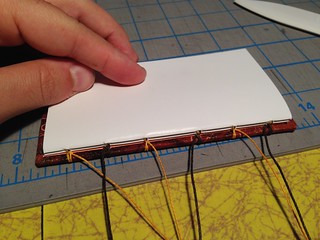 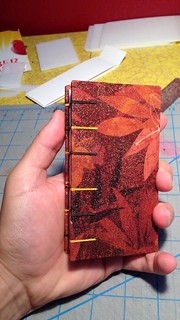 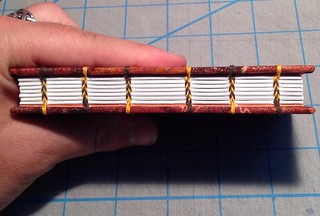 One for my step daughter. She picked out the fabric from what we had and chose white flyleaves and dental floss stitching. 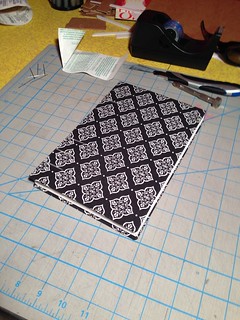 Also, as I'm almost out of coverboard material, I toyed with some thick stuff I have used in the past for painting pictures on. Its called MDF (medium density fiberboard). Was a pain to cut with the razor, had to make like 2000 passes, but eventually I got it cut. After sanding all the edges and the corners and both faces down, I actually really really like it. The backside has a soft fabric feel to it, and the front has a beautiful texture. Almost a shame to cover it with fabric or paper, I might do a "naked" one. 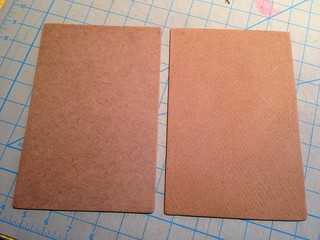 Wow... I'm with your lady on that small one... gorgeous! And your stepdaughter is the recipient of a great notebook, too. Lucky girls!

Looking very good. I haven't ever tried a coptic stitch before.

For cutting dense or heavier materials, I use a small knife called a taskupuukko. I make leather longstitch bound journals and other leather items and it's my go to for cutting heavy leather.

MDF is closer to thin plywood than to leather or regular bookboard. I really ought to use a table-saw, but I do not have access to one.

And be careful with them MDF boards, they deform upon absorbing water ....

Thanks for the heads up. I've used it as a cheap alternative to canvas for paintings in the past. Hoping it holds up as well to pva as it does to paint.

Yeah MDF *hates* water. It also gets dirty very quickly if you don't cover it. My dad's a joiner, and he uses a lot of MDF for stuff.

Pens: LAMY Safari Medium Nib with Delta Blue in converter, Bright Yellow LAMY Safari Fine Nib with R&K Helianthus in converter and a Baoer 051 with Deep Dark Purple in, you guessed it, a converter...

I wish I could change the name of this thread. It seems kinda rude to me, now that I've thought about it. I've made...7 notebooks so far, only the first one being for me which I havn't even used yet, and I've got at least 4 more people waiting for one. lol

I've made a couple more...quite getting the hang of it now.

One for another of my daughters. 4 sets of stations, was quite a mess of cording while stitching it all up. lol 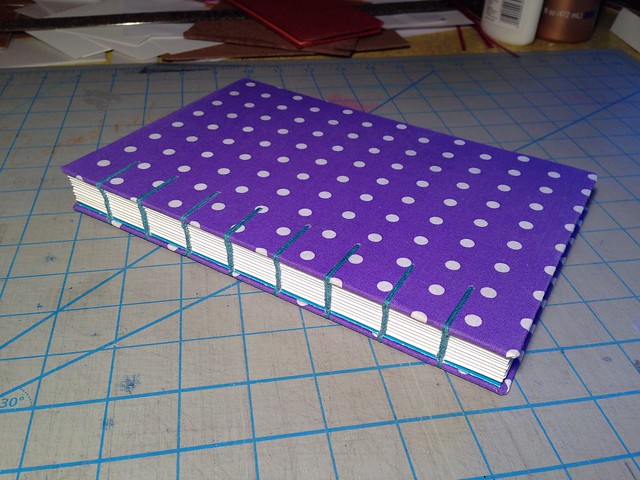 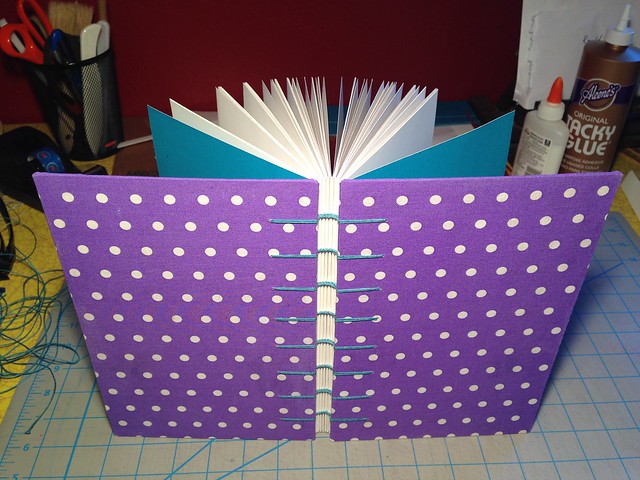 A smaller one for my desk at work, so to take to meetings and use  at my desk instead of the 10 little tear off scribble pads I normally use. Coverboards are scrap fruit-snack box, and the fabric is scrap I got in a bag at a yardsale, which I then splattered with metallic paint. I did fabric covered pocket hinges on this one, a first for me. I think I used too few stations and too many signatures, but time will tell. First of my creations I'm actually using myself. 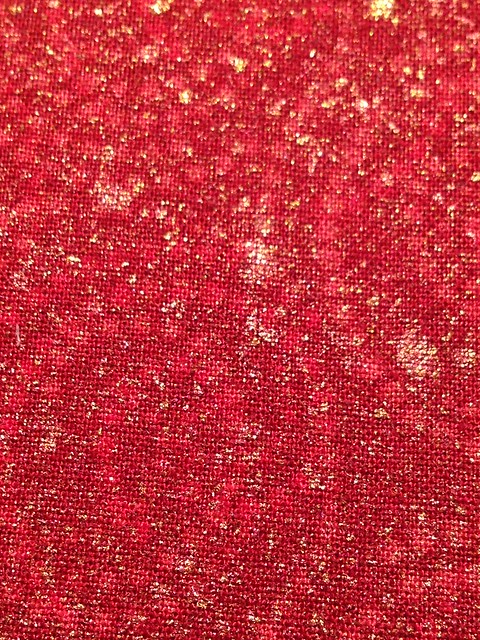 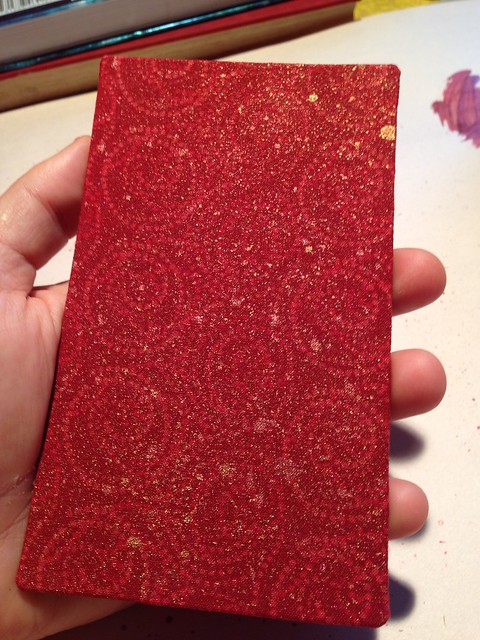 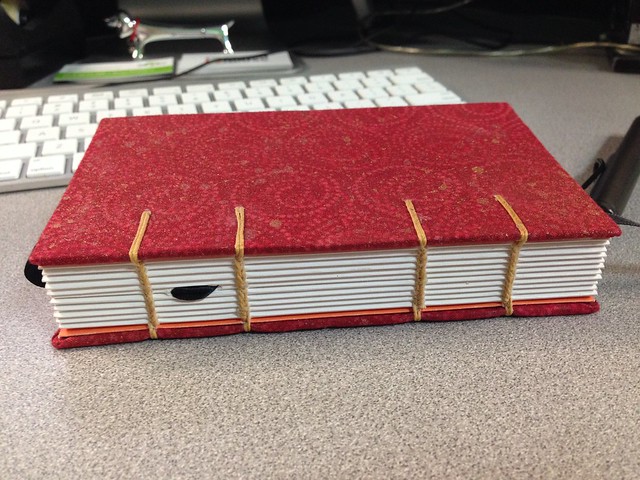 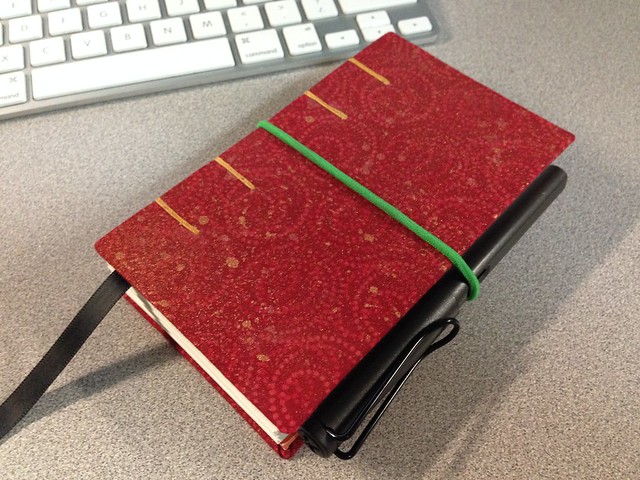 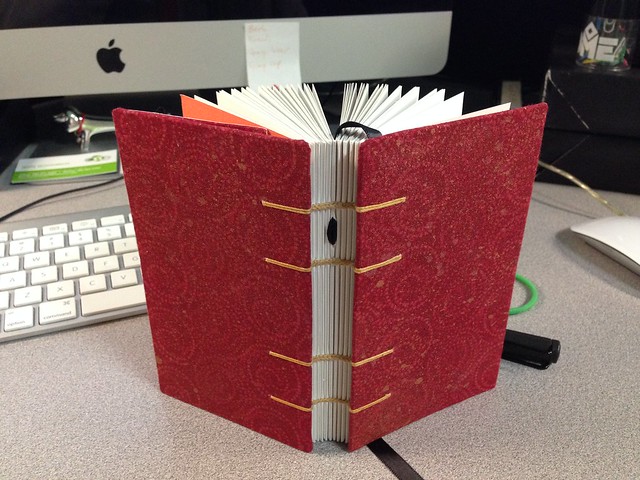 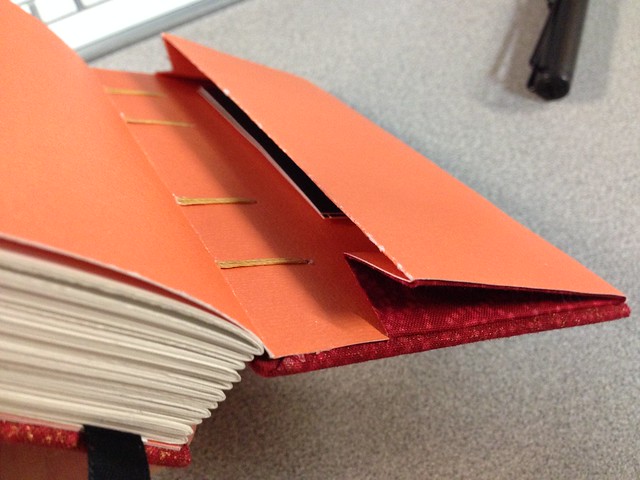 It's mostly the paper that gets me now...

Wow! Serious progress. I really like how you're going...

how many folios per signature?

yes when the bookblock gets heavier, you need to factor in the number of sewing stations in tandem ...

Lol, just cellphone pics. I don't get fancy with blank backgrounds and stuff like you do, no time for that kinda stuff. The paper is the same matte reply card I've used in all of them, I have probably a literal ton of the stuff in my garage. I always do 4 folios per sig. And while I maybe should have used more stations for the 11 sigs, as usual I made the stitching REALLY REALLY tight and its on the smallish side, and I keep it wrapped in an elastic with my pen when it's in my bag...so I think it'll be ok.

The biggest problem I've been having is not getting glue on things I don't want it on. Its very easy to have it bleed through the fabric on the covers with the very thin cotton stuff.

I think I'm ready to take on a book band on my next one maybe.