Ron, your first journal is coming along far, far better than my first did!
I'll try another time, maybe...
Anyway, good work!

trim about 1mm away where hinges gonna sit.

Ah, I see from that vid where I REALLY need that bone folder.

I'm not sure I get from that other post how to do corner hinges. But even more basic than that I'm not sure how to construct the base if the pocket. I thought maybe the back fly leaf was a trifold, but then I noticed in a pic how you sandwich the side hinges between two plies of paper. That would mean if the bottom of the pocket was of one piece with the back panel of the bookfly. Which would mean a 4 panel fold...which I think unlikely, at least for an 5.5x8.5 because the largest scrapbook stock available locally seems to be 12x12. Maybe next time you put together a pocket for one of your book, you can take like 5X as many pictures, stepping through it?

Also, I see a lot if your pics don't work anymore in many of your posts. I find flickr to be much more reliable than photobucket.

impressed with Ronstyle : ) -  pushing through with rapid progress! A fun thread to observe.

really liked the video.. the smallest details give the full finished appearance. recall seeing TMLee work through issues like corners. I still smile seeing these very consistently correct on his now expert pieces.

If you do not have access to the bone folder/burnishing tool was thinking that the side of a closed pair of metal scissors might work for your size hand. This would be too large for me.

I am really enjoying this thread and watching the ongoing progress. Can't wait to see the finished product. I hope to one day take the plunge and try this on my own. This post will proven to be a good reference for everyone.


When you cut the paper (or fabric) as illustrated in the video ,
give a wider berth from the corner of your coverboard.

In other words, as in the video clip,
don't cut the yellow paper so close to the corner of the coverboard , even though this is actually an established recommendation in many bookbinding tutorials .

Give a wider berth,
you will feel more comfortable as you make that fold.
The resultant fold will be nicer ...

In that clip,
that yellow paper cover is thick ,
so becos the strip of yellow paper is so narrow at the corner,
the paper struggles to fold over and stay glued there.
This is a practical reason to 'have more yellow ' at that corner.

I'm talking about the pocket.

So took a break from messing with this and went on a date night with My Lady yesterday. We had a good time, perused some antique/consignment shops. Didn't find anything good, except fond memories. 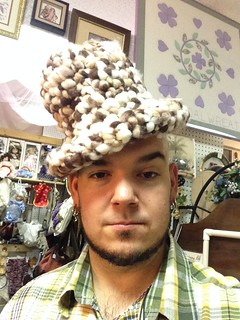 After some grub we decided to browse Michaels craft store, since we both had a 50% off coupon via the app on our phones. I found a (plastic i think) bone folder, that seemed much nicer than the bendy fiskars one that was only a dollar cheaper, very stiff and hard. Got it for $3.50 with the coupon. I think its plastic. Too inexpensive to be teflon.

While we were perusing the scrapbooking paper section, my Cupcake let me know that she actually has a ton of it at home that I can go through. Once we got home I took her up on her offer and there are quite a few 12x12 sheets that I could use. Much of it is girly, but I DO live in a house with 6 females, so thats ok. And if I did end up getting good at these, there are a few shops in our county that girly journals would probably sell like hotcakes from. Only problem is I'll have to probably work on a smaller size, since many of them we only have one or two sheets of. Cupcake has finally sparked some interest in my journal making when she saw the pocket on the back cover. (I could put coupons in there!!) So I'm already planning #2. LOL.

Anyway, this morning I got out my hand drill and used it to put holes in my covers, and in the fold of the bookflies. I decided I punched the holes in my bookblock prematurely, because now that I'm getting ready to sew it, I think the top and bottom stations are too close to the head and foot. So i've decided to offset the holes on the covers from ones on the spine. (Once again inspired by The Great TMLee) I tried the awl on the first crease hole first, but I didn't like how imprecise it felt, and how I had to push up against the crease so much. Its not a bookbinders awl, so its not as thinly tapered as it could be. The hand drill was perfect since hardly any pressure is required. 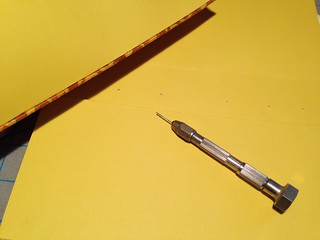 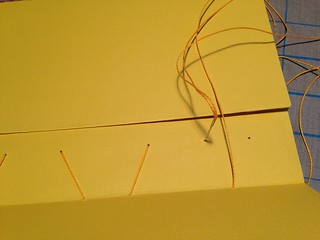 I waxed up some of my size 5 crochet thread and got to sewing. I realized quickly...that I vastly underestimated the length of threads I would need. Also, realized I was supposed to go from the inside of the signature to the outside of the cover on the first pass, I went inside the cover instead. Ugh. Walking away from it till the frustration dissipates. NEVER work frustrated, it only leads to (bleep) work. After posting this, and having some hot tea I'll pull out the thread to save for later for something else, and wax some longer pieces. 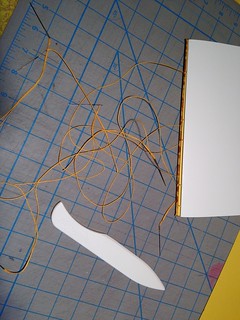 questions questions, too many questions...

Well, it's finished. Had a few flaws, some I see how to correct next time. Some due to not having proper tools. Everything is only as square as I could get it by eyeballing it against the ruler grid on the cutting mat. 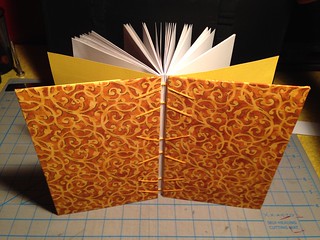 I can't wait to start using it. I'm making myself wait till I fill up my current sketchbook/journal though.

Well, it's finished. Had a few flaws, some I see how to correct next time. Some due to not having proper tools. Everything is only as square as I could get it by eyeballing it against the ruler grid on the cutting mat.

https://www.flickr.c...stickron/507017
I'll ipdate this link with a photo when I can get on the computer.

Youre on your way !

it looks wonderful! cant wait to see what you make next!

HOW TO MAKE A BUILT-IN POCKET

HOW TO MAKE A BUILT-IN POCKET

Also, I put together another one. Its in the press now, but here's some pics I took prior to putting it in. I "think" I did this one TOO tight, the cover wants to sit ajar...hopefully pressing will solve this.

No pocket on this one, its for a 4 year old boy, and would be torn out in short order. 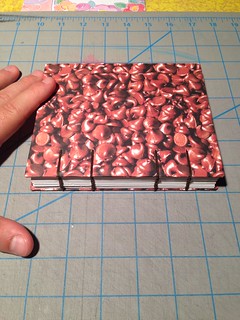 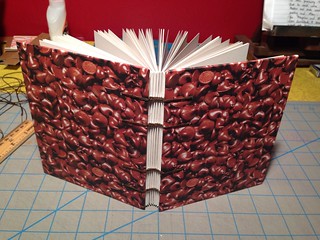 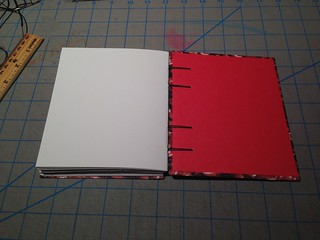 Also, I put together another one. Its in the press now, but here's some pics I took prior to putting it in. I "think" I did this one TOO tight, the cover wants to sit ajar...hopefully pressing will solve this.

No pocket on this one, its for a 4 year old boy, and would be torn out in short order.

What size is it?
It looks a little wider than 4inches

Hold the cover , one in each hand ,
Jiggle them about , apart from each other .
You are trying to use up whatever slack there may be in the stitching , and moving them to the cover stitches.

Of course all this assuming that all your signatures are not glued to one another yet.

It's mostly better this morning after being pressed. It's got some play now actually, but the cover still wants to pop up.

Size is 5x6 inches, 9 signatures of 4 folios. I intend to draw some stuff for my son to color and make him some number and letter practice forms on random pages before I give it to him. The other two little ones' books too, when I finish them. Have to give them all their books at the same time, if course.

It's definitely easier working on the smaller size, I didn't feel like I was handling the signatures as much, and therefore leaving less waxy fingerprints.

Was tying the cover on a book this evening when a cord snapped off right at the stitching. I guess I have to pick it out till I have enough to tie to another cord.

Take a look at this and please let me know what you think about it!

Here are the ones I did for my smaller three of my kids. No pockets, cause they'd just tear them, ages 3, 4, and 4. Hasnt' been a week since I gave them to them and they're half full of mostly scribbles already. lol 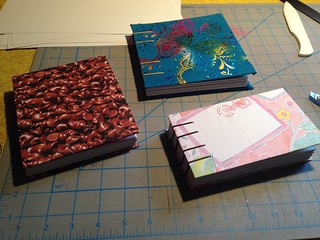 This one was much smaller, so I added a bunch more signatures to make up for it. 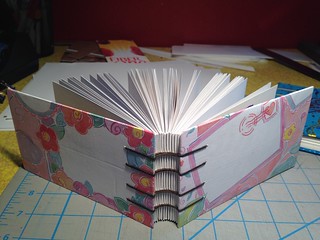 Had a hart time getting this one to glue down to the boards. On the inside, there's a lot of spots where the glue bled through, because I had to use so much to get it to stick. Definitely will use only natural fiber cloth going forward. 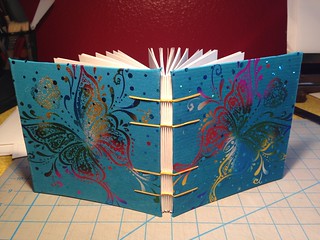 they look great! I bet they were thrilled,and what cool keepsakes for when they get older