Im not sure yarn would hold up to the stress of pulling and staying pulled, depending on what the fibers are it may snap, but they are just fibers twisted together and more spun in as the yarn is spun. Maybe some knitters could help you with more info on that

For the Tour De France, a bunch of knitters knitted bunting and strung it up around a Yorkshire town. The Authorities™ had it taken down as they said it may expand/contract when it gets wet/dry and pull down the street lamps it was attached to.....

Not sure how much credence to attach to that, but *someone* thinks it's quite strong!

Pens: LAMY Safari Medium Nib with Delta Blue in converter, Bright Yellow LAMY Safari Fine Nib with R&K Helianthus in converter and a Baoer 051 with Deep Dark Purple in, you guessed it, a converter...

if you mean knitting yarn,

I would advise against using it.

They are a little stretchy.

You shld be using something that can't stretch when pulled taut, eg, dental floss.

Best are threads like they use to mend shoes , or stitch leather , or mend tarps.

They are strong and don't stretch.

When the thread is stretchy , the stitches may 'loosen' when its not supposed to , and this may cause your Signatures to move out of position instead of staying put.

I agree with TMLee. I am a knitter. If you are going to use any kind of yarn, I would suggest linen as it has very little give and is usually spun more tightly than other yarns. Acrylic yarn might work but you would have to stretch it quite tightly. Cotton or wool yarn will be too fragile to use for bookbinding as they will fray during the sewing process; cotton sewing thread is a different animal entirely.

The "authorities" were correct. Because of the way yarn is spun, it will stretch when wet and contract as it dries. I don't think the bunting would have the strength to pull down the street lamps, though. That would be some pretty strong yarn! I'd be more worried about the yarn stretching so much that it would become a danger to the cyclists. Some yarns (i.e. bamboo and silk) will just stretch, or relax, even without being wet.

In general, I wouldn't recommend knitting yarn for bookbinding.

I bought tapestry needles, I hope I got the right size. I think they may be too small. I believe they're #18. Not sure I'll get cord that thick through the eyes. I'll give it a shot once I have some.

Ok I grabbed some size 5 cotton thread. They had size 3 but I didn't like the colors. I think 5 might be too thin, might try a double strand...

enjoyable thread, especially with everyone sharing their expertise.

I have None, but can tell you that the bone folder that seems to be the least expensive is at Walmart at about $5.

Also, though it won't be your thread of choice for color projects, the inexpensive TopCare dental floss will cut your skin before you can break it. Only in white, unwaxed, unflavored. 100 yards for $1 ish. Thought this might be nice to practice your stitching on the small notebooks.

Trust me, that's not a lot. I have a couple of real bone folders at work and they were a LOT more than that. When I requested them from my boss, he bought them but he winced when he found out how much they were.

It will be paid for from the savings in your first week of making notebooks. And if you create a journal of a webnotebook size, on the first one.

I'll get a bone folder, but I'd rather spend a few dollars more and get a real one from amazon or something. I made do with creasing them with my thumbnail for this one...less than ideal, I know.

Gathered up a few more supplies. I found an elastic strip to try and make an elastic closure out of... 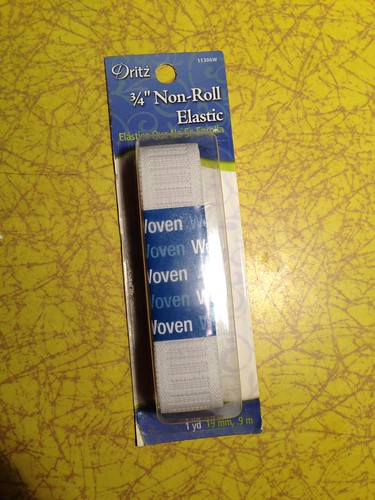 And I got the rotary cutter squared away and a pretty sturdy razor knife for $4 at walmart. 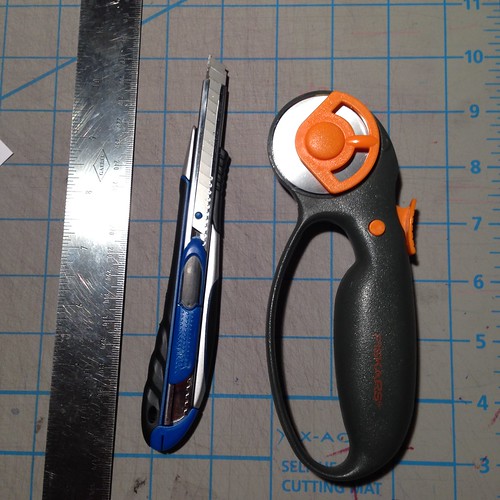 Got some thick yellow card from the scrapbooking section of Joane's Fabrics to use as the flyleaves. $.79 each! The color of this photo is more true to life than the previous one, its definitely more rustic gold fabric, with gold glittery bits, than it is orange. The thread may be too thin, but it fits through my needles...currently. We'll see about that after I wax it. Might be ok for my first one. 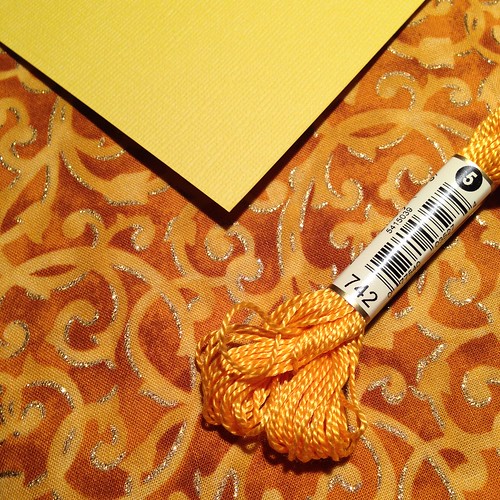 I created a negative space the size of the cover to try and plan which part of the fabric I want to use. I'll move it around a bit and find the sweet spot. I need to iron out the creases first, of course.  Also I need to look back through TMLee's post and see if I can find if he specified how much fabric I should leave to wrap on each side. I'm guessing an inch should be ok. 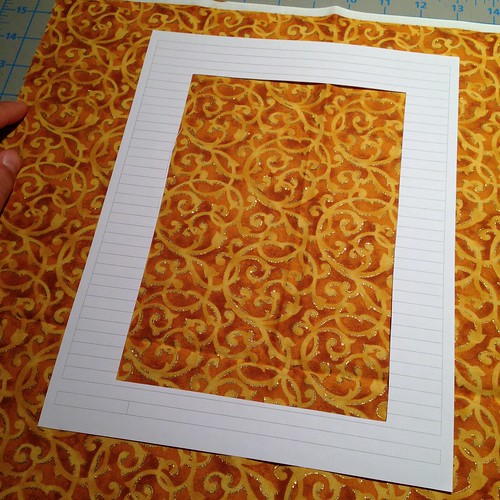 this is going to be beautiful!

Looking forward to see your next finished notebook.

Am impressed by your work.

Lol, my next one will be the first one!

I hope it turns out good. I'm still puzzling out some details.

Trust me, you'll want the waxed thread. Makes keeping everything tight as you work much easier.

Ok, was deciding how to cut the fabric. 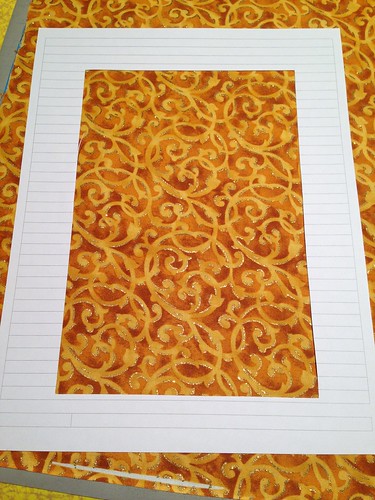 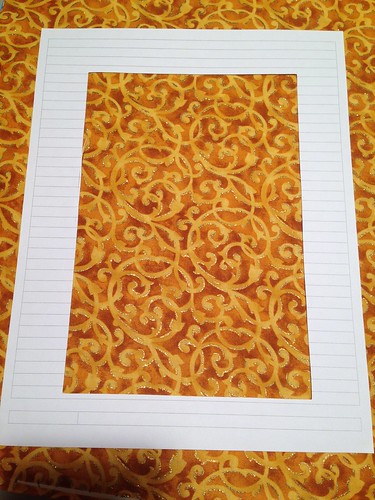 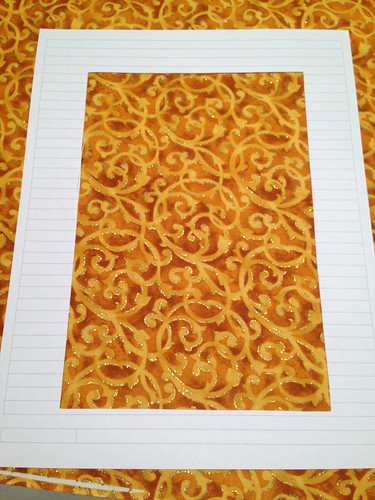 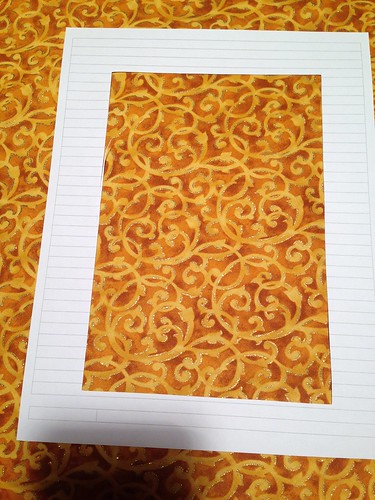 I opted for #2 because I thought the asymmetry left me more room to make a mistake in getting them perfectly centered, and I thought it was more visually interesting that way. 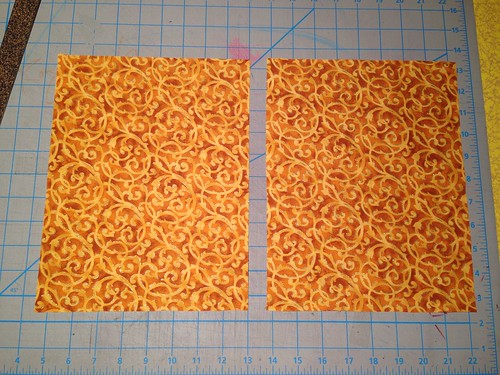 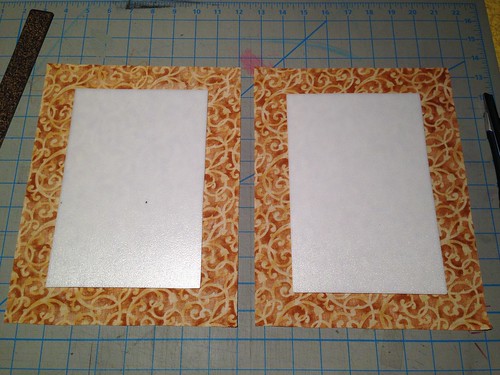 Ok, so I'm pretty unhappy wiht how the corners came out. I got the fabric glued on there nice and flat and almost centered, but I wasn't sure what to do withe the little bit of fabric right next to the corners so I cut a little notch out. Seemed to work ok in my dry run, but once it was glued it wasn't so good. 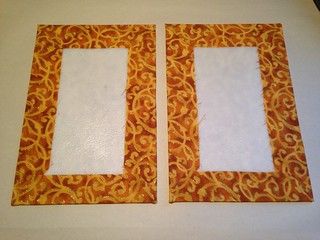 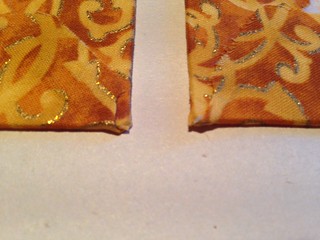 I'm considering pulling it off and starting over with new fabric pieces.

Ok, I've decided to move forward instead of taking backwards steps. Lesson learned for the next time, need to figure out corners a bit better before the next notebook. They're not that bad under casual scrutiny.

I've created the pocket. I prepared the flyleaves, the hinges and the pocket flap. I actually goofed when I assembled it, not attaching the bottom of the pocket to the flyleaf. I rectified that by adding a seperate hinge on the bottom. Could definitely be improved upon, but I've never really found a clear step by step on creating the pockets so made do with guesses and until I find a better way, this will work. Little touch and go with the glue though. I messed up and put glue on one of the wrong panels of the flap so its a little marred where I realized my mistake and pulled it apart while it was already partially dry. Its hidden on the inside of the pocket though. In then end, I do believe my flyleaves are a bit too big, with the hinges sticking out between the covers slighly. I believe I saw a thread where TMLee finally fixed this in his own method. I'll have to dig that up again.

I apologize for how much I'm spamming my own thready, and how image heavy it is. I hope it's not bothering anyone. 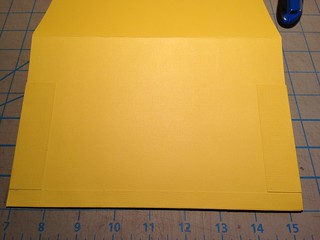 Two side hinges and one bottom hinge glued in place. This view is the surface that will be glued to the cover. 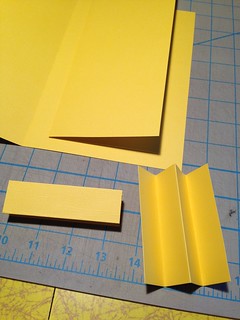 Hing is 4 one inch pleats. Glad I decided not to go all the way to the edge with the hinge, but to have a little hole, cause it gave me space to correct my error in not attaching the bottom of the pocket, with a hinge. 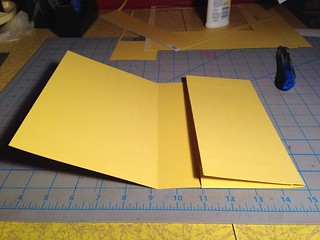 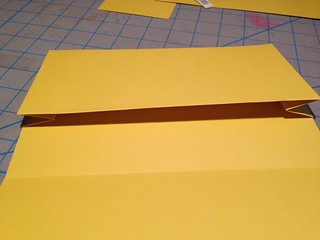 Thankfully you can't see where I had to pull the paper apart where I shouldn't have put glue. 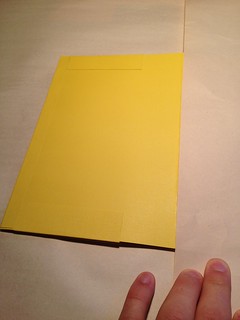 Preparing to apply glue to the back of the flyleaf with the attached pocket. 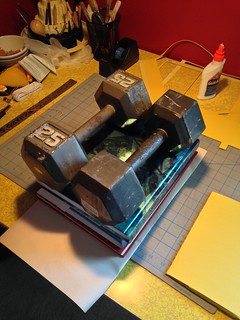 This is a book press, in case you can't tell. Hehe, Ron-style. Pressing the front cover flyleaf after gluing. This one I tried putting the glue on the cover instead of the flyleaf. TMLee always says to put the glue on the denser material but I wasn't sure which that was so did one of each to see how it went.