34 replies to this topic

The Tip Dips also use screw in nib units and there was a wide variety of styles available.  Keep your eyes out for a card of Tip Dip nibs.

Now that's cool!  I didn't know those were replaceable!  I'll definitely keep an eye open there, then.

The craftsman still uses the standard Touchdown TM, as I understand?

EDIT:  And with the very careful use of a .005 feeler gauge (modified with 600-grit to break all sharp edges) I was able to adjust the nib of the Franken-perial to a flow rate I consider "decent" for my use!

Ok, and another weird one.  I'll post some better photos as soon as it shows up, but this one has me stumped!  Triumph nib, Touchdown filler, but entirely gold plated.  The triumph nib is what really has me stumped, because all the common gold-plated Touchdowns I can find are Imperials, but they're all Inlay Nib, not Triumph.  Plus, it has some kind of full clutch ring, instead of the three-point thing that I see on most of the Imperials.  Another franken-pen, perhaps?  Like someone swapped an Inlay for a Triumph?

I should probably REALLY be doing this BEFORE I shell out the cash on the 'Bay, but meh!

Yup.  Frank was there.

I am kind of leaning that way, the section doesn't look like quite a perfect fit for the body.  Was purchased to provide material to practice Touchdown repairs on, so it'll serve the purpose, though.  Might even write well, who knows?

Is there any kind of MADE IN impression on that thing?  There were some South American Imperials that had us all a little dizzy a little while back (because several of us, not knowing of the sub-equatorial variants, insisted that this trim and that section could only be a frankenpen), and the section on yours is bringing the foggy memories of that event swirling back.

That said-- looks like the tipping is OK, and I've yet to meet one of those small Triumphs that disappointed if it was intact.

Those pictures are all I have so far, I snagged those from the 'Bay listing.  Once it gets here, I'll take some decent photos so we can get a better look at it.  The two views that show the nib appear to show a small Triumph in decent shape, tipping is present, and the tines don't look damaged... fingers crossed!

The small Triumph on the Franken-Perial works nicely, anyway.

I was going to say it is an Imperial III section on an Imperial Triumph body and cap... but that clutch ring stopped me cold. It looks more like the clutch rings on the cartridge pens. I'm stumped. Ernst might be right, when the TD fill, odd clutch ring and two tone nib are all taken into consideration, that short Triumph unit is not from any US-market pen that I am familiar with.

<em class='bbc'>I started nowhere, ended up back there. I caught a fever and it burned up my blood. It was a pity, I left the city; I did me some travelin' but it's done me no good.</em> - Buffalo Clover "The Ruse"

The Imperial does indeed seem to be an Imperial 2 or 3 body with a 330 cap.

With a little more extensive digging at the same antique shop today, I turned up another Craftsman, this one in gray, with a fine nib.  The restore on it was even easier than the little guy, the sac was still fairly pliable so it hadn't glued itself to the inside of the sac protector, and came off the nipple easily.  There were a few minor stains on the body that did not respond noticably to cleaning with the ultrasonic, or to my usual 10% ammonia solution, so I hit the body with some flitz.  Dang, looks like new!  The stains came right off, and it shined up gorgeously, as did the cap.  This is a LOT of fun, I should have gotten into it a lot earlier.

Ordered some more sacs for Touchdown fillers, along with three sets of Snorkel seals from David's site today (Richard was out of the Snorkel-sized sacs), and I also picked up that gold-tube Snorkel for parts.  Now I just need to keep an eye out for a spare grip section and body, the inner workings appear to be in good shape, just needing the usual seal-and-sac replacements.

I've got five various Touchdowns on the way, and bids out on a few more, I want to get some practice under my belt before I tackle a Snorkel!

Ok, the gold what's-that-pen showed up today!  Dang, what a mess THAT thing was!  The sac was completely full of dried, hardened ink.  The nib was also clogged up to an incredible degree, to the point that you could actually see ink fillets built up between the feed and the nib.  For some reason, it appears that someone attempted to shellac, perhaps, the sac protector in place as well.  Gentle heating let me remove the sac protector, and a bit of judicious dental-pick work convinced the sac that it shouldn't be in there any more.  The ultrasonic cleaner took all the crud off the sac protector with about a twenty minute run, then I swapped out the water and tossed the nib section in.  Cripes, I had to replace the water in the tank TWICE, not even counting the initial flushing I gave it with the ear bulb.  The ink coming out was black.

The body cleaned up beautifully with some Flitz, it just glows now!  None of that discolouration or oxidation was more than surface-deep, about ten minutes of flitzing, and that thing looks absolutely gorgeous.  The section is still soaking, I've been alternating thirty-minute soaks, flushing, and five-minute ultrasonic blasts all evening, and I'm still getting a slight hint of ink out when I shake it down.  That's just a matter of keeping up the regimen until it's clear, though.

I'm having an absolute blast with this, this will be the 5th Touchdown I've worked on, and so far I've been having very encouraging results!

All put back together, and shot a few pictures while I was at it.  With some care, and the assistance of an exploded view I found here on the forum, I was able to get the section disassembled and cleaned thoroughly, then re-assembled.  I wish I had been able to replace the gasket sealing the connector in, but I didn't have a spare.  It still felt reasonably pliable... 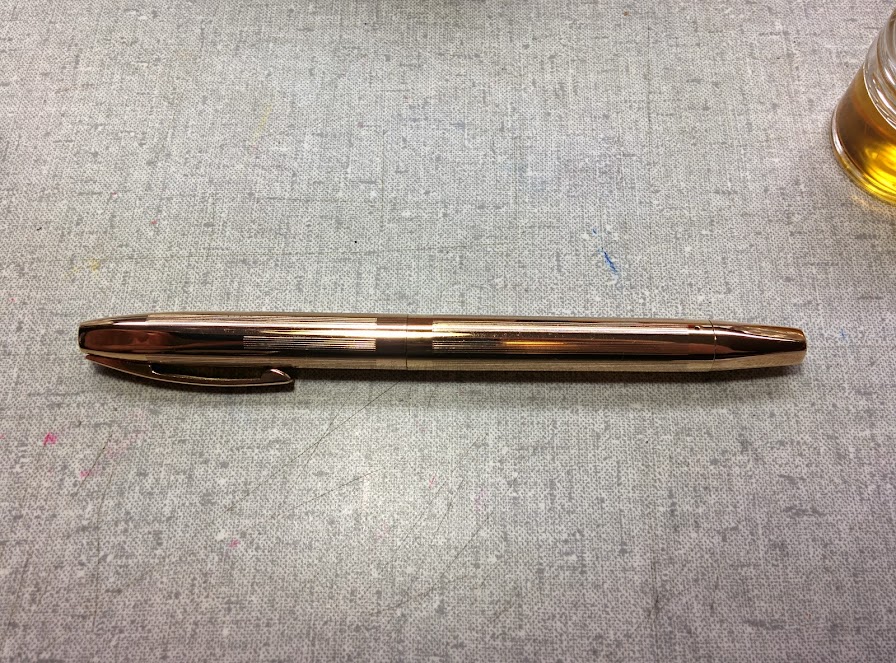 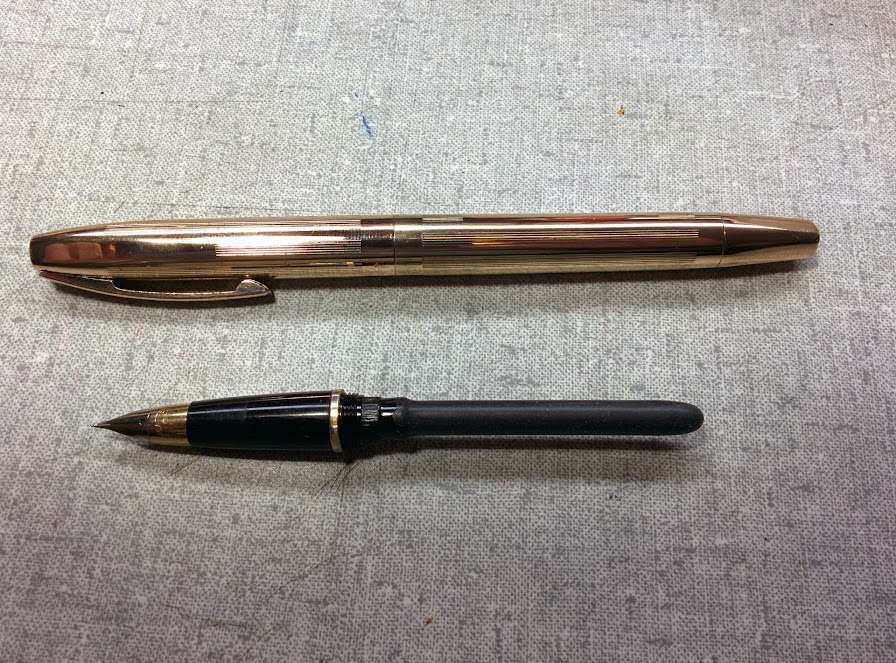 You'll note that the nib only says "Sheaffers", without the usual "Made in USA".  I'm wondering if this is a counterfeit entirely!

You'll note that the nib only says "Sheaffers", without the usual "Made in USA".  I'm wondering if this is a counterfeit entirely!

<em class='bbc'>I started nowhere, ended up back there. I caught a fever and it burned up my blood. It was a pity, I left the city; I did me some travelin' but it's done me no good.</em> - Buffalo Clover "The Ruse"

congrats on your purchases

Pens are like watches , once you start a collection, you can hardly go back. And pens like all fine luxury items do improve with time
Back to Sheaffer

Also tagged with one or more of these keywords: snorkel, touchdown, triumph, tuckaway