Handwriting From Hell... A Quest For Personal Improvement.

63 replies to this topic

English is not my native language (dutch is). Currently I'm practicing with cursive, I have no idea which cursive it is, I guess it's a bit of a hybrid between what I learned in school as a kid and things I picked up from the internet. But it is a big enough change from what I was doing before to break away from a lot of my old, bad habits. Just this weekend my wife complimented me on creating "the nicest looking grocery list she's ever seen"

When I visited my local drool-licious writing goods shop last Saturday, they took a look at my journal and they were kind of impressed with the improvements. Although I must say, as most of my writing is not done in my journal, the differences in there are kind of obvious.

Ever since I switched to cursive, the improvements have been huge, I still have a relapse now and then, but I guess that's not too strange. It'll take a bit more than 10 days of practicing cursive to undo one or two decades of bad habits.

And @Wallylynn, my notes are not really systematic (nor do they need to be), they're more like "thinking out loud on paper".

I'll try to post another sample of my writing later today 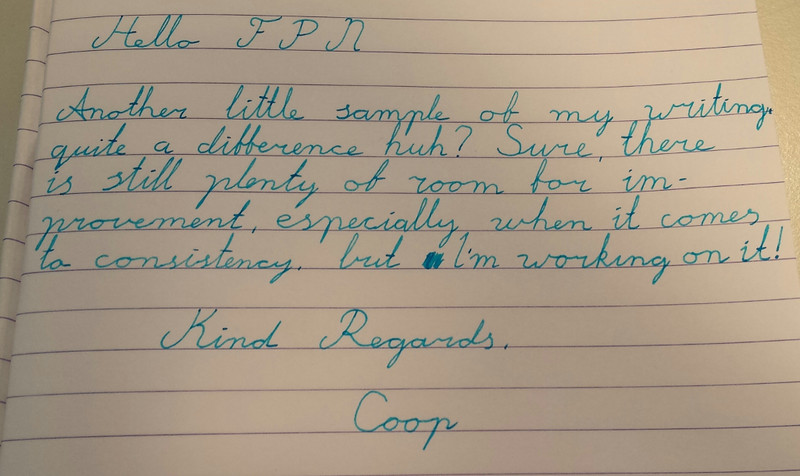 Yes, there is much, much more to improve, but coming from this: 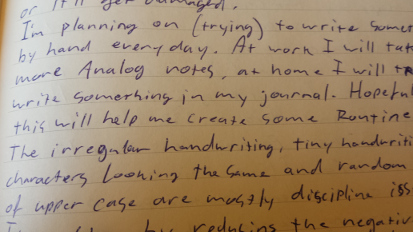 Go for it.  Your work is an inspiration that it can be done.

It's super smooth and really quite a wet writer. Close to too wet even, if you press down just a tiny little too hard. This makes for a great practice pen. Relapse to my bad habit of trying to kill the paper and the pen punishes immediately with inky fingers.

I decided to give the blue-black Hero iron-gall ink a go in this pen, and guess what? It works perfectly

I'm happy, even though my fingers are blue-black right now...

Your new cursive writing looks great! All this improvement in just 10 days?! Amazing!! I like your cheerful blue ink. :-)

Not 10 days, been doing cursive for 10 days. I've been working on my handwriting for about a month before switching to cursive.

But I must say that the improvement achieved in those 10 days of cursive is a bit more dramatic than what I did in the month before.

And a handwriting sample with the latest addition 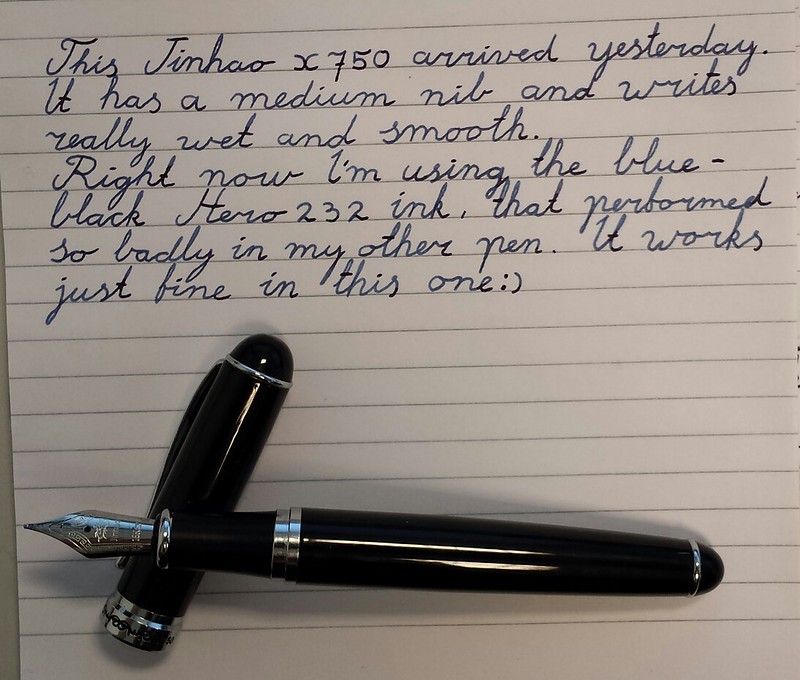 I'm glad your new pen works with the ink you'd had trouble with.

You are getting better much faster than I did a couple years ago when I started to work on my penmanship.

Hey that is some great improvement. Aren't you a lefty too?

Only if you count my political views

Hah, then I misremembered your handedness ^_^

Just gave my wife a hand written wish list for my upcoming birthday. Well not really a wish list, more like a shoppinglist for La Couronne du Comte.

What's on it?
A blue TWSBI Vac 700
A TWSBI Vac 20 ink bottle
And a bottle of sapphire blue ink 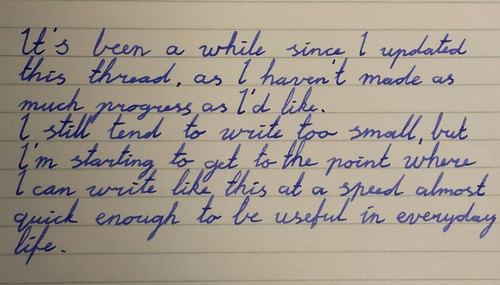 When I decided to work on my handwriting, it took me a while.

The biggest change was learning to write with my arm, as I used to write with my fingers.  That single change took over 3 months of CONSTANT daily practice of at least 1 hour a day.  It was training my arm to write with smaller finer movements and to NOT use my fingers to write.  This change also let me write much larger than I could before, and with ease.

Every so often I will look at my writing or how I write and decide to make a change, and then it is back to ugly handwriting while I train my hand/arm to write differently.  While this seems time consuming, I found that it is very difficult for me to change several things at once, because I cannot concentrate on each of those several things at the same time.  For me, it is much easier to change ONE thing, so I can concentrate on fixing that one thing.  Then when I have that down, go on to the next thing to change, and continue on.

There is an old saying from one of my other hobbies, "fast is slow."

What this means is that you should learn slow, so you understand what you are doing and learn the proper muscle movements, all under full control.   Then, once your muscles are trained in what to do, it speeds up by itself.  You think the word the and your muscles write the without you thinking about each letter t then h then e.

But just be careful, as you learn a new letter form.  There is such a thing as "too slow."  You are writing a letter, not drawing it.  So you need to write in strokes.  It can be a slow stroke, but it should still be a stroke.  Example, I was trying to learn a new way to write the capital G with a pointed pen, and I got stuck because I started to think too much about the form (because I was working on form) and I could not write it.  I was breaking up a stroke into pieces, and that did not work, because the pieces did not fit together smoothly.

My handwriting is not so good at this point but it has improved a lot over the last few months. The way I look at writing is like good music. Writing, Like music, needs a good consistent rhythm and it needs to "breath". A one point my writing was so terrible even my doctor would have me fill out forms a second time.

have you looked back at your original post? That's a tremendous change. Keep it up!

I like writing with my Lamy 1.1 nib for Christmas and other cards, where the changing width of the ink like makes the writing look more interesting than plain mono-line out of a regular ball tip fountain pen.

Your brain forms ideas much faster than you can write.  There is a tendency to rush the writing to catch up.  Of course,

the attempt is futile.  So down.  Concentrate on the way you want each character to appear on the paper.  If you want

Practice.  Write your grocery list longhand, with your fountain pen.  Write letters to your friends and family.

I'm in the same quest. I abandoned cursive when I was about 13 or 14 and have been printing ever since. Ironically, I also do calligraphy, but my normal handwriting is atrocious. I too have been attempting to re-learn cursive. The hard part was figuring out certain letter forms, and transitions.

What I'm doing is copying a book that I'm reading word for word. It gets me all kinds of words, and I'm fanatical that if I don't write a word correctly, or up to my new standards, I'll write it over again. If it takes me more than three times to get it right, I add it to a list of troublesome words. These I will practice in drills.

Right now I'm focusing on straight line writing. Later I'll try an oblique or italic nib. I've used those quite frequently in my calligraphy, but calligraphy is different than everyday writing. I'm trying to work first on letter forms, spacing, and then speed.

Once I get my speed up, then I may switch completely to cursive. It's strange, almost like another person's writing.

You've made some great progress, and it gives me hope. Keep going and now make your cursive style your own.

Also tagged with one or more of these keywords: handwriting, improvement