65 replies to this topic

The cap on my VAC 700 broke: the chrome ring came away from the body of the cap.

I contacted TWSBI  and Mr Philip Wang organised a replacement for just USD 5 in days from Tapei to the UK.

Respect! ( as the younger members of the community might say!)

That is great customer service.

I had the same thing happen to me and this pen was snugly in my pen wrap all this while. 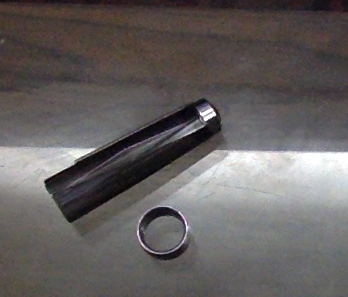 Interesting thread.  My Vac 700, purchased new in 2012, has been a rock-solid pen for me......Mine broke exactly where the others did today when I tried to un-cap it to fill it.

Emailed Goulet and TWSBI.  Hopefully they have a few spare smoke caps somewhere in the warehouse that they can send me.  I could swap the great stub nit into another pen, but I really like my Vac 700.

Here recently I have been looking at my TWSBI Vac 700s and thinking of giving them another chance.  My reasoning: I can buy two (or more!) Vac 700s for less than I've spent on some fancy pens, and I can keep a spare handy.  Replacement parts are given out freely.  Maybe the parts breakage is something I can live with, in return for the many other positive qualities that these pens have.  And then I saw that there's a new 700R out that is supposed to address the ink flow problems I had also observed.  Maybe I should give it a try?

A couple of days ago I inked up both the 700s that I already have, one clear and one smoke.  I was reminded again of just how cool these pens are in design, and how well they function and write.  Today I was writing a letter, and I reached to grab one of them (just wanting to write out a quote in a contrasting ink color) and. . .  When I uncapped it, the CAP CAME APART IN TWO PARTS.  AGAIN!  Just like last time.

All I can say now is no, just no.  This is never going to be acceptable.  I don't care how cheap the pens are, or how fast TWSBI send out free replacement parts.  I can't use a pen that could come apart in my hands at any moment.  I can't carry this around with me; I can't use it to sign documents.  I can't trust it.

Especially when there are so many other excellent pens from other brands that don't break like this, I don't have to put up witih TWSBI.  I'm done.  They're going in the bin.  I guess I'll salvage the nibs for my parts box, though, because those are nice.

I recently saw the 580 alr in gunmetal. I’m considering buying it. I figured, by now that Twsbi had taken care of all the breaking issues. I certainly had a bunch of cracked 580s back in about 2013 and 2014. I was one of the unlucky saps that Twsbi wouldn’t help. They said I shouldn’t tighten them so hard.
Well, I like the looks of the 580 alr and I guess I’ll go ahead and get one. If this one cracks, I wonder if they’ll replace it this time?

Just reviewed the posts on this topic.  I have lots of the TWSBI 530 and 580 demonstrators and one Mini.  No problems yet, but they're lightly used over the years.  Several years ago, I purchased a smoke-colored 700.  From the start, the piston moved back and forth fine, but no vacuum was created, so no ink went inside the pen.  I followed instructions with the pen, disassembled the relevant vac parts, put in some fresh silicone in the appropriate place, reassembled, and still no vacuum.  Rather than hassle with customer service and delays, I used a ready solution:  I have lots of hypodermic needles left over from 1994-98, when my son (now 40) was 14-18 and took growth hormone shots.  I remove the nib-and-feed, inject ink into the vac reservoir (holding the pen upright), then reinsert the nib-and-feed.  That works perfectly.  As the pen holds lots of ink in its reservoir, this is a practical solution.  Of course, had I had the patience, the best long-term solution would have been to get the pen fixed.

I had the same problem with a Turquoise-Blue Visconti Wall Street FP with the vacuum-filler that I purchased from a pen store in Honolulu (owner had passed away and his family was selling off inventory).  I did not test the pen before the purchase (my bad).  But, again, I used the same procedure as described above, and it worked with the Visconti, which also has enormous ink capacity.

So, in essence, I treated this pens with defective vacuum fillers as eyedropper fillers with great results.  I would add that if you can get a hypodermic needle shot, it is much easier and more precise to use than an actual eyedropper.  You just clean out the hypodermic with water for reuse later.  Emptying and cleaning is no problem, interestingly enough.