19 replies to this topic

This review covers most of the current tortoise editions available in the Pelikan Souveran range of pens, but the focus is on the new M800 brown tortoise. Although I also have the 101N tortoise edition I chose not to include it because it looks really different than a Souveran type pen. I think the only pen missing here is the M600 white tortoise, which I don't own. The M400 white tortoise is still available whereas most have sold out of the M400 brown version. The M800 is still available, but its numbers are limited. 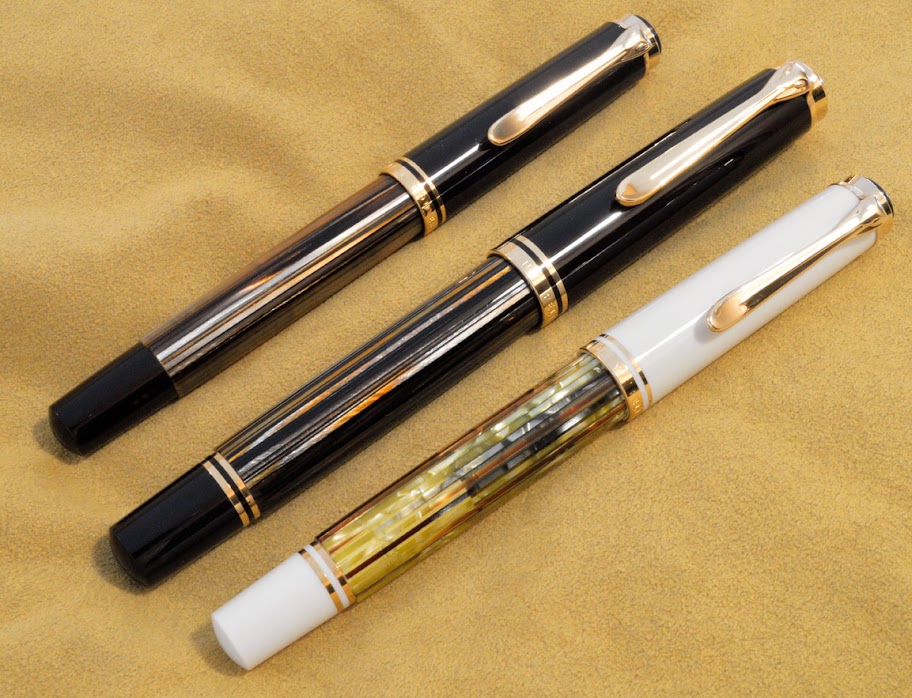 At first, I was sure that I was going to skip out on the M800 brown tortoise edition. Yeah, it looked pretty good in pictures I'd seen online, but I wasn't blown away. Also, I already had the M400 brown tortoise that I liked a lot. The price of the M800 brown tortoise was also a barrier, though mostly psychological. I felt that Pelikan was being greedy. After all, this is just an M800. No special packaging, no throwback styling, no nothing except a higher price. OK, so, what happened? I saw it in person. 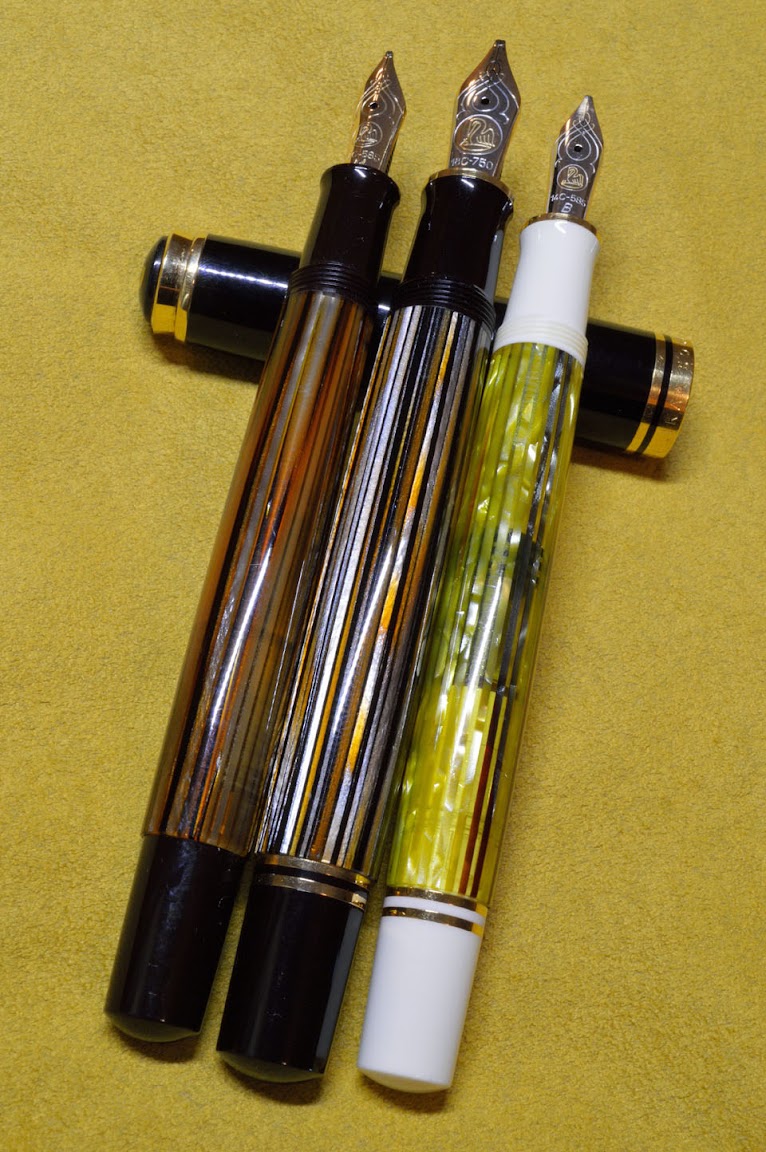 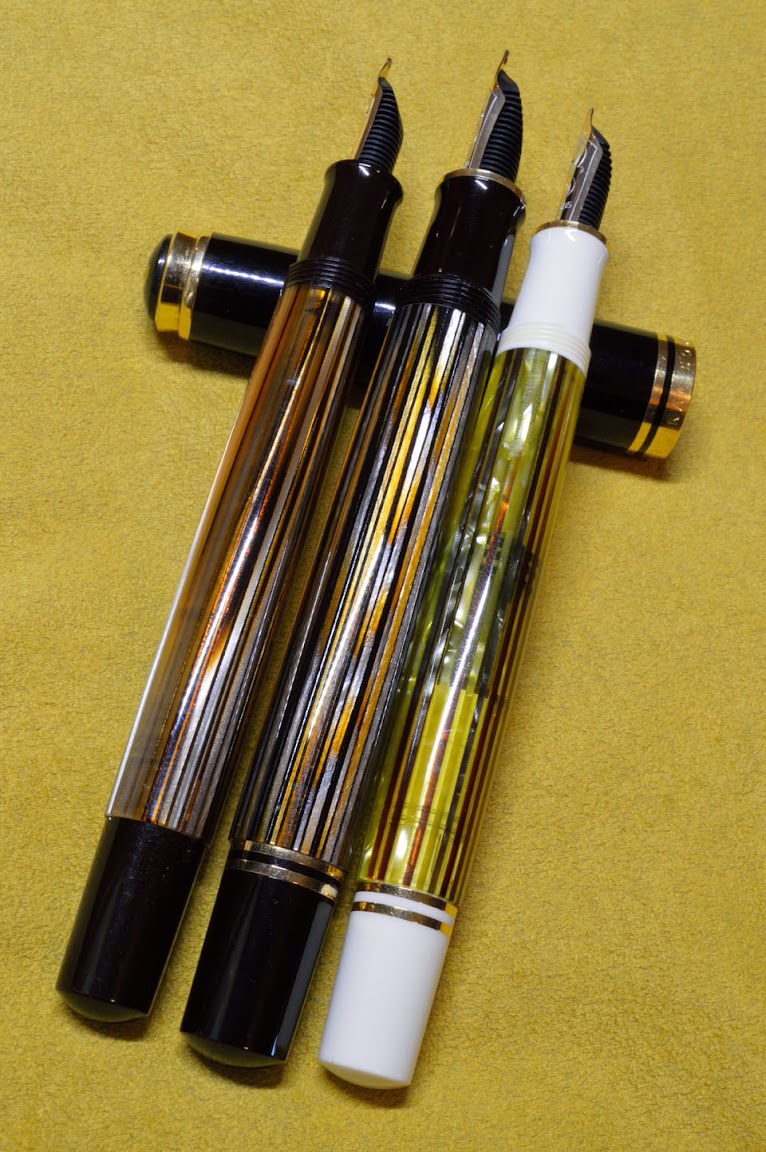 Wow, I was not prepared for how gorgeous the pen was in the flesh. This one is really good looking. It even pulls off that shiny gold finial that's on all the new Souveran pens. The tortoise binde looked different than the one on the M400 brown tortoise too. On the M800 binde there is more pizazz, more iridescence, more pop, more something. The whole look is classy yet not stuffy. As you can see, both of the brown versions look really different from the white M400. The binde on the white pen is more of a honey color. Regardless, I don't really think of turtles when I look at any of these pens. Maybe I'd get it if the binde was solid, but the stripped appearance breaks up the pattern. I think, for example, the Platinum celluloid tortoise pen looks much more like polished turtle shell, but maybe that's just me.

The solid plastic parts, the cap and filler knob look black in most light, but in bright light they show up as chocolate brown. This is especially noticeable next to a cap that is black, like the M1000 cap the brown ones are pictured next too below. Of course, none of these caps are the color they seem. The black is actually a dark red, and so are the brown. In my photo you can see the transparent red nature between the cap rings on the M400 cap. My new camera must have a better IR filter than the old one because I can't see through the caps in the photo. The older Nikon D40 saw right through Pelikan and Montblanc precious resins, not so on the D3200. Anyway, I really like the effect the brown parts give. Most of the time you see black, but once in a while the brown pops out making me smile. 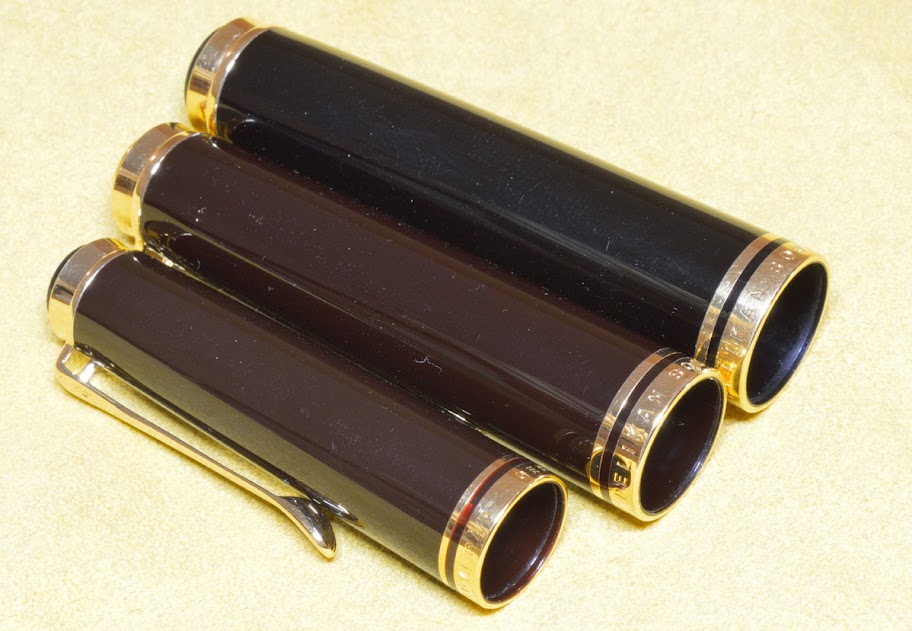 The nibs on these pens are different from each other too. The M400 pens have 14K nibs and the M800 has a bigger 18K nib. The M400 brown pen also has a monotone yellow gold nib whereas the others have two-tone nibs. The brown M400 has wide writing medium that has been squared off just a little bit for some extra writing character. The white M400 nib started out a custom reverse OB. I did not like the oblique part though so I modified it into a straight IB. Both the M400 nibs are very good writers, but they were professionally altered. The M800 nib is as supplied by Pelikan.

As if the looks were not enough the nib on the tester was magnificent. It was an OBB and boy did it write a fantastic line. Lovely, juicy, perfection itself. Alas, I am left handed and I had to force myself to hold the pen unnaturally to get the OBB to perform at its best. I had to have this pen, so what to do? Luckily there was one with an IB nib in the house. I did not yet have a Pelikan with their new italic nib. So...I gave it a spin and knew it was mine. Right out of the box the IB was a very good nib, not as good as the OBB, but it is nearly excellent and it is more interesting than a round tipped nib. The IB is also much easier for me to use than the OBB. Notice below how broad the Pelikan IB writes. The Omas has a custom broad cursive italic that writes sharp cross stroke. The Pelikan nib writes a little fatter overall, but less juicy. My left hand smears ink less trailing the Pelikan than it does the Omas. Ink flow is not stingy though, and I'd be a fool to wish for better ink flow. 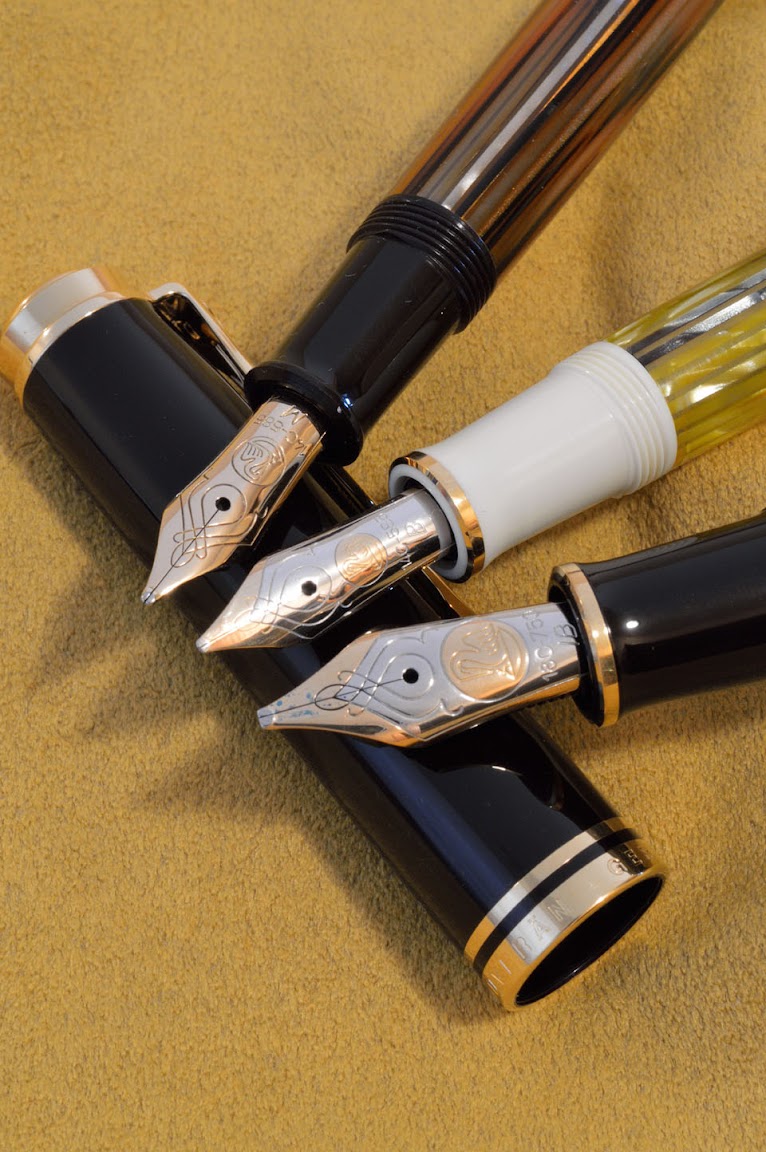 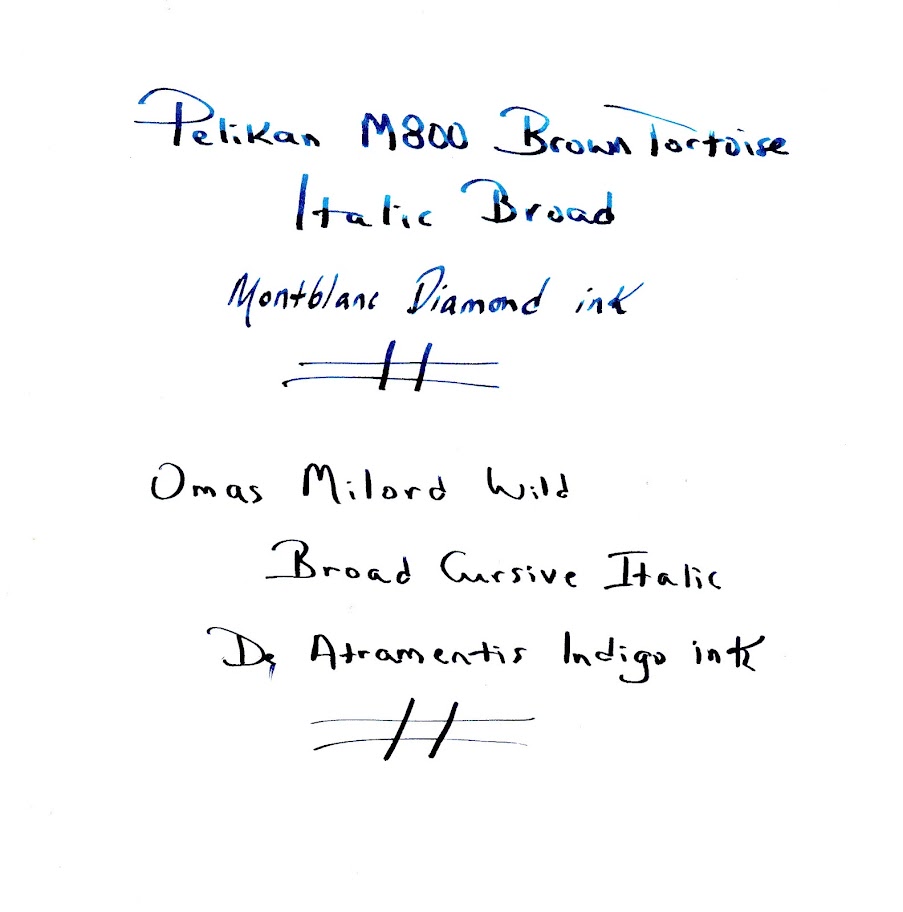 The M800 brown tortoise only came to these shores in limited numbers. Dromgoole's in Houston (where I got mine) ordered something like 52 and only received about 40. Over half have sold out at this point, and since there has been no indication of a second production run maybe these pens will be hard to find soon. For a pen that I initially turned away from when it was first offered to me, I was shocked at how much I liked it when I finally saw it in person. I'm glad they still had some because I'd be forever kicking myself if I'd missed this one. While all three are high quality pens that share a common theme they look really different. The classy M800 is somehow stately and glamorous. The brown M400 is more casual looking drawing less attention to itself. The white M400 stands in stark contrast to the other pens. The white material is bright and clean looking. The white is almost feminine, but I'm OK with that. Anyway, it's fun to own all these pens. Maybe now I need to get the white M600?

Very nice discussion. I plan to remain content with my M415 tortoise, but you discuss all of the options in a very understandable way.

Dang. I wasn't even going to consider this pen. Now I have to think about it. Very convincing review!

I can't stop buying pens and it scares me.

Dang. I wasn't even going to consider this pen. Now I have to think about it. Very convincing review!

Just thinking about it is trouble, it has a tractor beam!

It was good to hear that the pen impressed you in person more than photos. I've gone back and forth having only seen photos so far. But your testimony sounds convincing!


Pens are like watches , once you start a collection, you can hardly go back. And pens like all fine luxury items do improve with time

I never thought I was a "Pelikan person", but this pen has changed my mind.  I got it because of its stunning looks, but have been blown away by how well it writes!

First - its looks:  this tortoise material is visibly different from previous versions.  Seems more iridescent and has more depth. Almost hypnotic when you turn the barrel in the light.

Second - the M800 size is so comfortable.  My previous Pelikans have been M600 or smaller, and this pen body and nib size are ever so much more comfortable for my hand.

Third - I got the Fine nib and am very impressed with its smoothness and ink flow.  I will probably also get an EF nib since that's my preferred line width, but there's nothing wrong with this Fine either - and it surprises me that I like it as much as I do, even with my small writing!  Aesthetically, this nib, with its 2-tone intricate design, is a pleasure to watch as it moves across the paper.


The sky IS falling. C. Little

concrats to your new addtion to the pen family :-)

The M800 tortoise is realy a great and nice looking pen. I got mine some days ago

with an OBB nib.

his own grain, light reflextion and color distribution. The stripe pattern is not an

equal grain structure.  Randomize some cross the others, some are parallel

That is what makes evey pen so unique.

Have fun with it!

Hi Jandresse! I found this older thread by accident. Do you continue to enjoy your M800 Tortoise IB?

If you get this, I wonder if you could indicate how big your letters are in your writing sample? I am considering an M800 3B, and I am wondering if the IB might suit me better.

What a nice color variation. Thank you for sharing!

Hi Jandresse! I found this older thread by accident. Do you continue to enjoy your M800 Tortoise IB?

If you get this, I wonder if you could indicate how big your letters are in your writing sample? I am considering an M800 3B, and I am wondering if the IB might suit me better.

Yes, I still like the pen very much. While I don't have that writing sample any more I'd hazard a guess that some of the capital letters are 1 cm tall. I tend to write smallish letters, and the IB does not much get in the way.

I caved in, I bought.

I caved in, I bought.

I hear you. I have caved in repeatedly and ended up with so many Pelikans.  In addition to the writing pleasures I can derive from using Pelikans, I like the fact Pelikan pens are designed for user-administered maintenance.

Pictures are in the for sale forum here. It should arrive tomorrow.

Pictures are in the for sale forum here. It should arrive tomorrow.

Look forward to your comments on the pen after delivery.

Just bought one a few days ago ....... I love that flexy nib (mine needing a little attention because a little bit scratchy)