Thank you. I found these really helpful too.

If I am writing normal speed, my "r" looks like the #2 sample in the OP.

If I am writing fast, it looks like a cursive "i" without the dot.

I went with option 1 because it's fairly close to what I do (see below).

As for the second character in the OP's image, I'd love to be able to talk to the person/people who decided to write a cursive lowercase 'r' that way in the first place. Not trying to to offend anyone, but every time I see someone write an 'r' like that I cringe and can't help but think they need to be shown what an 'r' actually looks like

This is how I do it. Except with me it tends to spread out until it looks like a V, or just get squashed completely into a sort of twitch in the heart-monitor line. (One of my 2016 projects is polishing up my handwriting a bit!)

ETA: Sorry, for context I'm talking about the image posted by Ken Fraser!

I love writing the letter r, but sometimes (like in the third line) I kind of mess up and end up writing a blob.
I write a combination of cursive and printed letters, whatever requires the most fluid strokes for me. This is an interesting discussion. R has gotten me for quite a while now and still does sometimes

I'm glad I'm not the only person confused by lowercase 'r' since I was taught cursive.

Depending on how speed or what I am writing, in order from fast to slow cursive. it could be 1, 3 or 5 above for cursive r.

What's amazing to me is that this rather simple question can generate 145 responses. Ken must have really struck a nerve.

I'm totally a combination of three and five now that I've been writing with dip pens for over six months.

Version #5 for me. I can see myself moving to #3 one day though. Sometimes I try just out of curiosity, but I seem to find it very hard to get rid of the sharper upper right curve. This will probably take some extensive and more focused relearning.

I think 2 looks better if you can do it properly but I can't do it that well so I do 1.

Paying by cheque in fish and chip shops since 1981 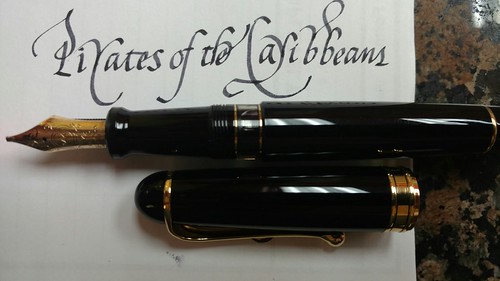 "It does not matter how slowly you go as long as you do not stop."

"Everything has beauty, but not everyone sees it."

Here are both. The one on the left is not comfortable for me. I prefer to write, and to read, the one on the right, which is a mixture of 3 and 5.

In Ken Fraser's example I try (and fail--I'm working on it) for his #5, with or without the flex. It doesn't come out that way, as I can't, for some reason, maintain the continuous flow. So it looks more like #3, (where there is a break in the action between the upstroke and finishing the "r") but not near as nice. I think what I'm doing is sort of emulating an Anglo-Saxon (think Beowulf manuscript) "r" without the descender on the vertical stroke.

I may not have been much help, but I DID bump your thread up to the top.

AAAndrew's second illustrates mine as well, although mine is far less elegantly done -- a rather late post. I chiefly posted to thank the person who made mention of the palaeographic origin of what I would have called the cursive r.

My "r" doesn't really fit into the examples. Therefore a quick scan. I just tried to use a bunch of fast R's and not think about it too much.

Here is an example of mine. It is pretty consistent like this. If I get in a hurry it doesn't look quite as nice though, as it "flattens" out. "Words are, of course, the most powerful drug used by mankind" - Rudyard Kipling
"None of us can have as many virtues as the fountain-pen, or half its cussedness; but we can try." - Mark Twain

What are those lovely inks?